The party - Free the Fairies Day if it was a thing now - was surprisingly nice. Killian, Belle, Granny and Mary Margaret were in conversation. Henry was with Regina. Initially she thought to include herself in the first conversation when she saw someone in the corner booth. God they hadn’t spoken in way too long. Emma sat down, intending to ask her how she was when she caught sight of what she had: Grilled Cheese. After her talk with the Mayor and the events she was famished and that seemed to be by far the best option. Emma reached out and stole a half as she plopped down across her friend. She’d buy them another one to share.

“At least one person in this town doesn’t think it’s ‘eating like a child’ when you like Grilled Cheese. Hi.”

theandysar replied to your post:[[MOR] sudden realization that if you choose to…

#includes spoilers, #kinda, #but this guy irks me
1 notes · See All
gracelesscaseText

#Dalton fic, #includes spoilers, #so don't read if you haven't read it yet
14 notes · See All
josskuhhText

Tonight episode of Insecure was sweet. It was the right balance of healing, closure and the opportunity of a new beginning. I really enjoyed getting a peek into what Issa and Lawrence relationship was like, when they were in a healthy spot in their lives. This has to be one of the best episodes this season.

It had me rooting for them. I don’t know how they are going to close up with the next two episodes. I know I still have questions on candola? She better not be pregnant. Also Tiffany?? Is she okay after the baby she might have some postpartum depression. Molly and Issa are officially over??

The fact that Issa said that her and Molly aren’t friends anymore. That was hard to hear. But I mean if they aren’t talking then… I guess they aren’t. Two more episodes and all these questions are at the tip of my tongue.

Not sure how they are going to answer all my questions. Also the search for La Toya. I hope they find her

#insecure hbo, #insecure, #issa dee, #spoilers, #insecure spoilers, #pregnancy, #josskuhh speaks, #my thoughts include this being one of the best episodes this season
8 notes · See All
instantcopycatText

#I tried to include as little spoilers as I could!, #Mahari Yuware Gaaie Savanare: Promare AU, #About Blog
2 notes · See All
muzzleroarsAnswer

P5R SPOILERS UNDER THE READ MORE!

#honestly with the way my akira is, #any back and forth in the third semester was ridiculous lol, #he HATED maruki's nasty little world and wanted it GONE, #he and goro were both constantly just like 'THIS IS STINKY' and that includes on 2/2, #it's gonna make it...really hard to accept that bad end for the thieves den bleh, #BUT this was kind of a tangent sdkfsjdf still i think that was the case, #with only akira retaining that power, #p5, #p5r, #akira kurusu, #takuto maruki, #p5r spoilers, #persona 5 royal spoilers, #Anonymous
38 notes · See All
sophiajosepheText

Meanwhile I am still a god damn hopeless romantic so cry with me over Kyo’s looks and Yuki in general.

#original, #me, #furuba, #fruits basket, #fruits basket spoilers, #furuba spoilers, #i know Yuki loves her like a mom, #its amazing, #i think that can be included in the hopeless romantic category, #its about deep emotions and bonds damn it, #also i was a kyo stan from day 1
22 notes · See All
intrite-artsPhoto

RIP to one fire lesbian! 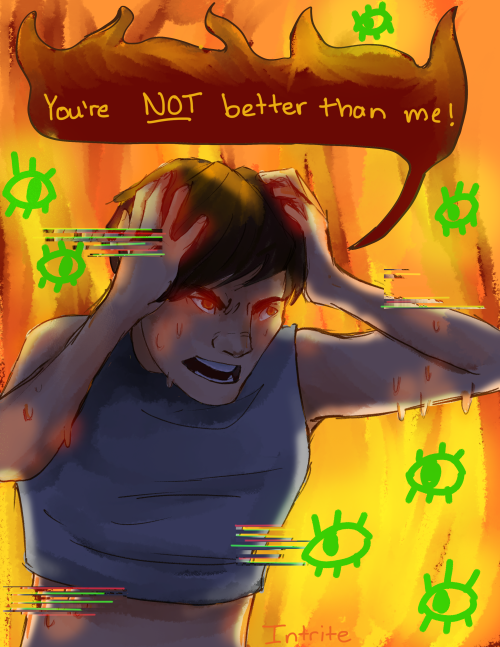 #TMA, #tma spoilers, #the magnus archives, #Jude Perry, #mag 169, #how we feelin after this episode?, #I thought it was interesting how they had her die with that glitchy sound, #so I tried to include some glitches in the drawing, #Jon’s really back on his smiting huh?, #I’m concerned
107 notes · See All
tinyscoopText

are you something that understands how ominous you’re being right now?

Nearly saw a post about TLOU2 that wasn’t caught by my tag filter but I was saved by tumblr and its shitty inability to load images, can’t believe I’m grateful this website is coded by monkeys for once

#Tlou2, #Ive already seen a Big Spoiler on reddit, #Fucking reddit, #I hate everyone on it and that includes myself
6 notes · See All
this-is-a-podcast-fanblogText

Cecil and Carlos stopped existing. Then Cecil forgot that Carlos was his husband and Carlos had to handle the trauma of that. Then Carlos was framed for a crime and arrested. Then they’re fighting about if they want to live forever or not. Then they’re caught up in the midst of a prison riot. Then Cecil is losing his free will and Carlos has to physically restrain him, all while watching him get possessed. Then they’ve both been kidnapped and can’t find each other. Then they’re about to literally be killed with the rest of the town. But oh, by the way, they have a child (who you’ll never hear about.) :)

And then the show’s only canon trans character is a xenophobic cop who targets the mentally ill. So there’s that.

I absolutely love Welcome to Night Vale and I think that it’s great that two writers who are (as far as we know) straight are working to include queer rep. But part of supporting artists is holding them accountable. Yes, Cecil and Carlos are some of the main characters, so of course they get more screentime - and by extension, more difficulties to overcome. But lately it’s just felt piled on excessively.

Plus, many of these plotlines have baggage for queer people. Unjust arrest, framing for something someone didn’t do, a large queer population threatened with bodily harm, a fear of losing your same-sex relationship due to outside forces - these plotlines are heavily queer-coded and potentially triggering. Marketing them one after the other to a very queer fanbase is not a good move.

I really doubt that the show creators will see this, but I hope they take it into account if somehow they do. Night Vale means so much to me, but I don’t want to be hurt by listening to it. The real world hurts me enough.

#tw death, #tw homophobia, #(it's not really homophobic persay bc i don't think it's intentional), #but i'll include the tw to be safe, #tw gore, #welcome to night vale, #cecil palmer, #carlos the scientist, #sheriff sam, #lgbtq, #just let them be happy, #wtnv spoilers
25 notes · See All
lend-your-lungs-to-mePhoto

→ Post-Modern Magik: The Whole Premise of This WIP

Tag List Under the Cut - Ask to be added!

#aebookone, #myedit, #wtwevent, #writeblr, #was it ill-advised to include the person of mass destruction?, #probably, #it's redacted because that's like, #the biggest spoiler, #and i mean the BIGGEST
26 notes · See All
midddoriyaPhoto 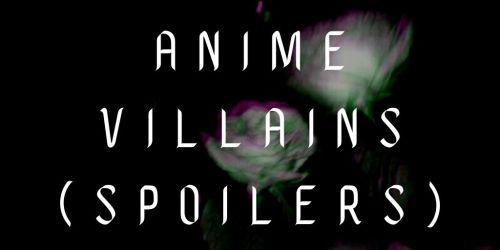 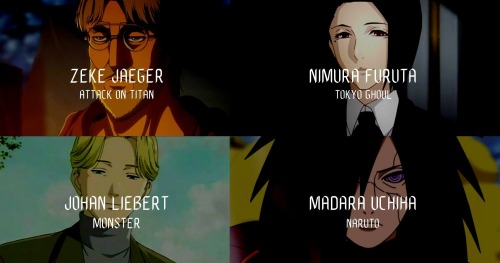 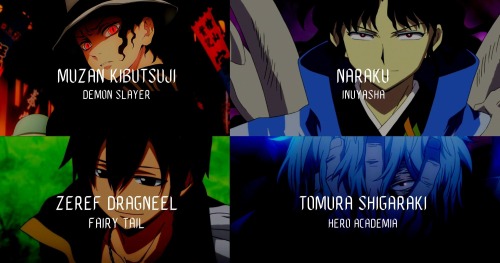 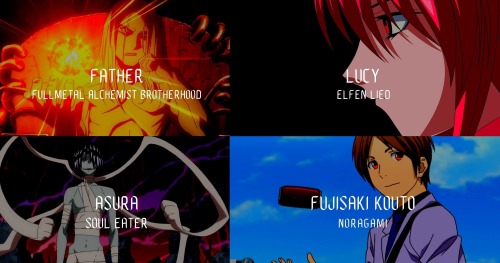 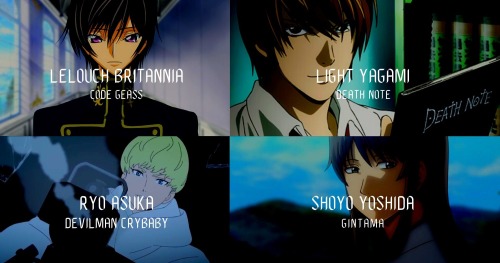 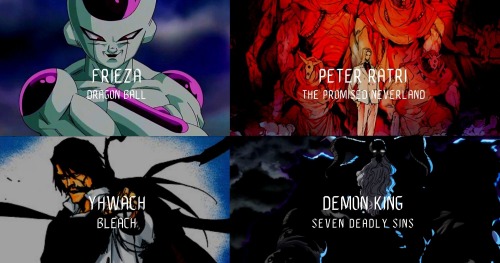 #some are debatable i guess, #but i didn't include some that were ongoing that it's kind of unclear who is the main villain, #anime, #SPOILERS FOR THE MANGA AND ANIME OF THESE, #zeke jaeger, #attack on titan, #nimura furuta, #tokyo ghoul, #johan liebert, #monster, #madara uchiha, #i picked him instead of kaguya because i didn't like her so imma just ignore her, #naruto, #muzan kibutsuji, #demon slayer, #naraku, #inuyasha, #zeref dragneel, #fairy tail, #tomura shigaraki, #boku no hero academia, #father, #fullmetal alchemist brotherhood, #lucy, #elfen lied, #asura, #soul eater, #fujisaki kouto, #noragami, #lelouch lamperouge
52 notes · See All
iturbideAnswer

This is.  Honestly really broad because to some extent I like all the 3H characters (since I’m assuming you’re talking about 3H at this point).  Vaguely in order of more positive to more generally negative (though there’s certainly wiggle room for some of them):

#answered, #anonymous, #fire emblem: three houses, #fe:3h spoilers, #there are things i like about most of the characters, #and there are certain moments that i dislike for most of them too, #they're all human and flawed and i appreciate that, #but there are also some that i have major issues with, #and that's basically the above list, #cyril isn't included because my feelings for him are complicated
10 notes · See All
insertusername94Text

RIP Crust and all the heroes who died while trying to save people and stop murderous terrorists.

#my hero academia, #spoiler, #bnha 272, #mha manga spoiler, #mangacap, #including the guy twice murdered for catching his friends, #but lets ignore that because the villains had sad backstories
36 notes · See All
Next Page