someone posted this saying it’s rules on a facebook page about abortion rights, and how they’re still being policed by men????????

but this is good! I’m a trans man who was born w/ MRKH and most posts I see are very female-language oriented, which makes me feel invisible.

it’d be nice to see more pages including all afab people in them, bc most of us do have to deal with reproductive stuff and abortion rights and all that, and everyone deserves to be included.

An intro into what I am and what I believe in since I can’t be to in depth in my bio:

who believes that anyone can be a feminist

Feminism main issues still are the issues women face and yes that includes what transwomen face as well. If you read my full bio you see that I am antiterf but I’ll put that here too. I view trans people as the gender that they say they are. But feminism also reaches past just women centered issues, its also about gender equality for men and women. And yes men have issues too such as mothers almost always win full custody of the children even if the father is the better parent. Unlike other “feminist” I do not view men as the devil. I see men and women as equals and because of that I recognize that there are equally bad women as there is men and equally good men as there is good women. I also believe as feminists we should be at the frountlines of any inequality protest.

I am left leaning but I’m not liberal

But I am also not a radfem so I guess by default that makes me libfem?

This blog also has some leftist political views in it.

Indian men when putting up an ad on a matrimonial page: want a young,beautiful, fair, slim,tall, well educated, patriotic, obedient, caring, virgin with no history of past affairs, motherly figure who is ready to have children within a year of marriage, good at cooking and cleaning bride.

Also Indian men: why am I still unmarried :/

Videos from one of the protests in Poland yesterday ⚡☂️

Just so they know we’re not gonna shut up.

For those of you who don’t know, on October 22, Polish ‘Constitutional Tribunal’ that is illegaly taken over by our government, made abortion in cases of incurably damaged fetus, constitutionally illegal. Fetal surgeons can go to jail if something happens to the fetus during surgery. Women will be forced to give birth to babies that will die in pain in few hours after being born.

When you try to be pro-life, but the result is the opposite. Fuck off Poland! 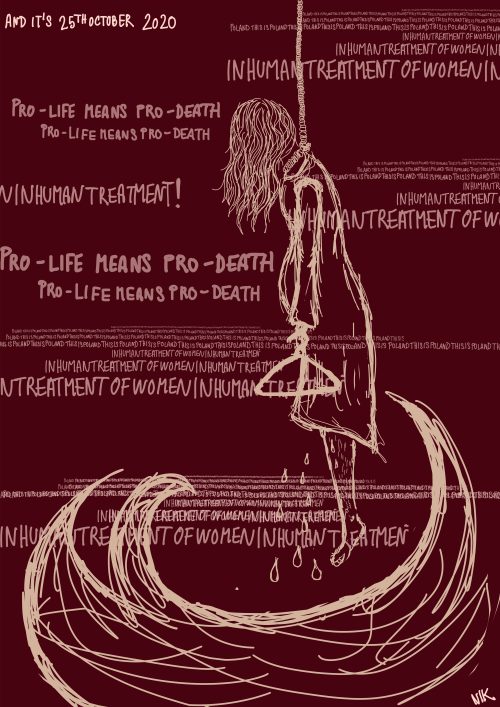 Feminism is for everyone!

I think patriarchy just has its adverse effects and you don’t even realize it.

I used to think that walking really straight, such that it will bring attention to my boobs, will make people think that I am a “slut” with “too much confidence”

But this dawned on me today:

This is absolutely false. Please remember that being a confident woman is NOT wrong.

We have been told, passively, that confident women are not likeable, even unwanted.

But this is because men fear our capability. They fear when we can be as boisterous and loud as them.

So, to every girl who needs it:

Please, please get rid of your intrinsic misogyny.

Feel free to add your own #misogynisticdawns

Before the world knew what intersectionality was, the scholar, writer and activist was living it, arguing not just for Black liberation, but for the rights of women and queer and transgender people as well.

This profile by Nelson George of Angela Davis in T Magazine encapsulates today’s tarot reading: a trajectory from Knight of Wands through to Temperance and The Sun. The ‘brief, electric period’ of Davis’s life where she was imprisoned as an accessory to a crime she did not commit and considered a terrorist for her Black radical politics was dramatic enough to have made her an international icon and the subject of multiple creative projects retelling her story (including songs by the Rolling Stones, and John Lennon and Yoko Ono).

Yet the intense heat of political and media scrutiny did not burn Davis out. She has ‘kept her fire’ and continued in her fight for freedom, while also working for inclusivity, showing solidarity with oppressed peoples including the Hmong during the Vietnam War, and nourishing the Black, feminist and LGBT communities with her intersectional approach. For Davis, narrow-minded goal-setting stymies the potential for real change: balance and acceptance of a broad church is key. She reasons pragmatically (throwing her support behind Joe Biden) yet advocates for further action (expressing enthusiasm for progressive female congresswomen Alexandria Ocasio-Cortez, Ilhan Omar, Ayanna Pressley and Rashida Tlaib).

Ultimately, Angela Davis exhibits ‘relaxed optimism’, her grey Afro ‘circling her head like a crown.’ She continues to illuminate shadowy places through years of teaching, writing and editing. As she says in the piece: “When we do this work of organizing against racism, hetero-patriarchy, capitalism — organizing to change the world — there are no guarantees, to use Stuart Hall’s phrase, that our work will have an immediate effect,” she says. “But we have to do it as if it were possible.” It is this magnificent and consistent optimism that warms us and encourages us to grow. 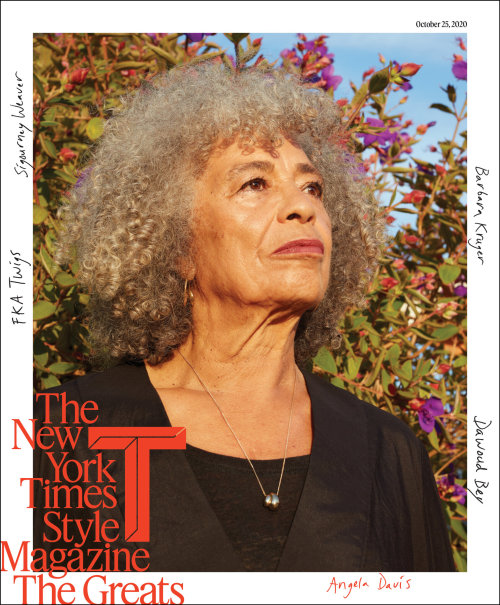