INJURY AND SOME BLOOD WARNING!

Well, guess we finally know how he got all those gray hairs. That’s what you get for pseudo-adopting a self-sacrificial teenager. 😅🤣

I’m already working on some new stuff but it won’t be as often since I’m aproaching finals.

If you like my art support with a reblog, it is appreciated. 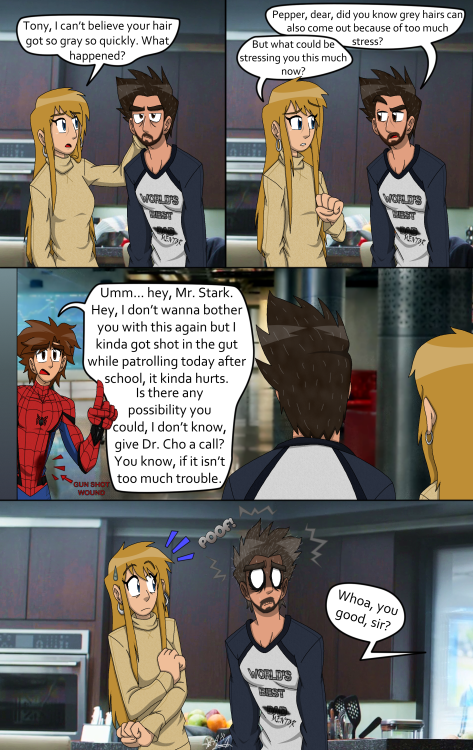 peter: if i ever grow u-

tony: if i ever grow up?

peter: *nods* yeah, if i ever grow up, im never getting a vacuum, theyre too loud

Peter : i put an egg in the freezer .

Peter : its for science .

Peter : the science of seeing what a frozen egg looks like .

steve: i think you might’ve upset your dad.

peter: i don’t have any parents.

peter: *sees tony shaking his head in disappointment in the corner*

Tony : Because it’s sitting right in front of us and it’s broken .

Sam : Oh really ? Then what were you doing by the coffee cart earlier ?

Bucky : I use the wooden stirrers to push back my cuticles . Everyone knows that Sam !

Steve :I broke it. It burned my hand so I punched it.

Thanos: Stark, I will ruin your happiness by any means necessary.

Peter: so what happens if I push this button?

Peter: *grins and presses down on the button*

Tony: it’s when you let it go that things get nasty.

peter:
fanfiction writers: *furiously projecting themselves onto him*
peter:

Tony: Where the actual fuck did we find this fucking kid, man?

Harley: My mom threw me out the window when I was three because she thought that I looked weird. And then you kinda just picked me up. I remember that very vividly.

Tony: why do you look so mad?

Stephen: YOU HIT ME WITH THE FRYING PAN

We could have been the announcer took off the blue-haired prince.