Tony: kid what are you talking about?

Peter, getting closer: your vibes are off

Tony: why aRE YOU RUNNING ToWARDS mE??

Drax: I scare people lots because I walk very softly and they don’t hear me enter rooms so when they turn around I’m just kinda there and their fear fuels me.

Scott: How did you get in my house?!

mj: what? no, peter IS the baby

bucky: i dare you to marry me

bucky: then i win.

sam: what? hell no! i’m gonna marry the fuck out of you right away. let me right a church right now. you think you can just win like that? hell no.

Summary: A truce to end all wars leads to an alliance between Earth and Asgard in the form of Loki marrying a mortal. None of them what this. None except fate.

Word Count: I’ll be leaving this job when things settle down. I cannot work for a company that does not have humanity or sympathy for the people that keep it going. I would rather get a decent pay and be treated with the respect I deserve for the job I do. This pandemic really brought a whole different side to how much they care for you.

The rough kisses of the wind under the light of the moon bring with it the song of nocturnal birds ready to take the night. Every little ecosystem of the witching hour is alive as the light brings forth a new day and a new adventure, bursting out into songs of the twilight; or their supper. Everything except for the God on the horse that zooms past them, interrupting their daily chores to look at him in curiosity for five seconds before going back to whatever it is they were doing.

For Loki, it is less of an adventure and more of a race against time. He knows firsthand the sensitive areas of the Asgardian mountains, especially the ones lying close to Vanaheim and Alfheim that are hiding the remnants of old enemies of the throne. Once the war was over, it was a given that the invaders from other galaxies who had set their claws in the weakest kingdoms would have to face the Asgardian forces to draw them away, and so they had fled in the darkness of the many nights to prevent being captured and exiled to their planets or worse, being left on a barren moon to fend for themselves. And it would not be any barren moon but one which the Silvertongue would choose specifically for their suffering. 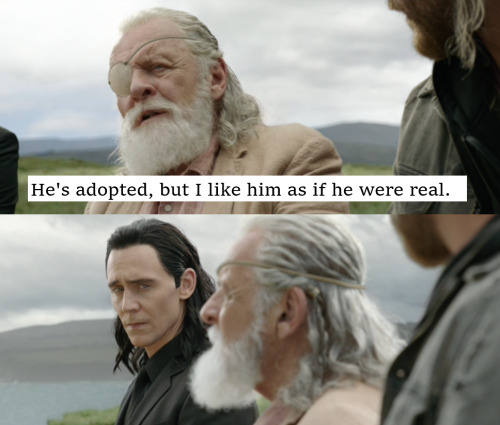 Steve: Hey, do you think I could fit fifteen marshmallows in my mouth?

Bruce: You’re a hazard to society

Bucky: And a coward. Do twenty.

Loki: Speak for yourself.

Loki: And lucky for you, they don’t laugh.

Sam: where is Steve? I’ve been looking for him everywhere but he’s not there

Bucky: hold on I got this

Bucky: can someone please hold my hand

steve: this quarantine is so boring sometimes!

bucky, on the other end of a video call: well this quarantine got you an online date with me so shut up.

Stephen: how many hours of sleep did you get this week? 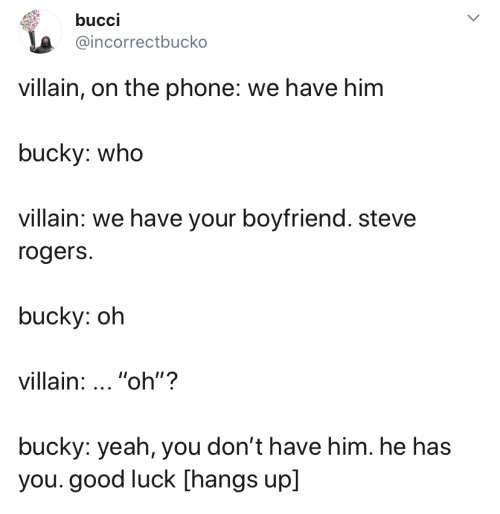 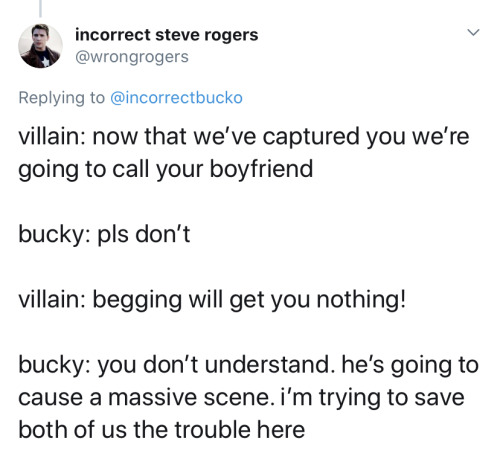 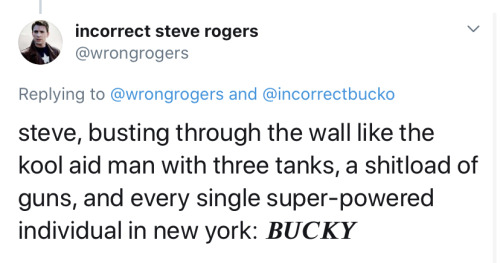 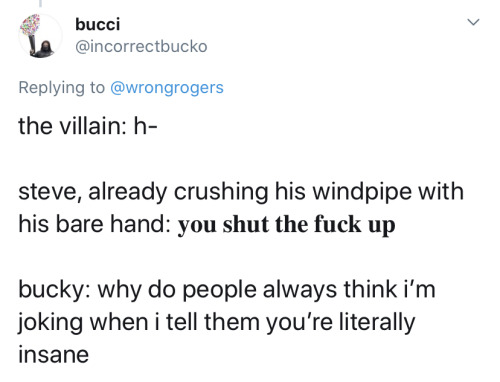 Okoye: I don’t have time for this.

Okoye: [gestures vaguely at everything]

Rhodey: so how’s it been going?

Tony: my 2 year-old said “night night” and shoved a pillow over my face.