Screenshot redraw because I’m proud of Infinity Train for managing to get onscreen murder.

maybe we should have a little infinity train watch party when hbo max launch.

my sketch that I made a few weeks ago

I’ve been dead on tumblr for over a year so I’m gonna resuscitate this account by posting some fan art.

we, as a society, need to discuss this amazing exchange and the acknowledgement that neither of these two have a brain cell between the two of them.

Man just her arc in book one was nuts 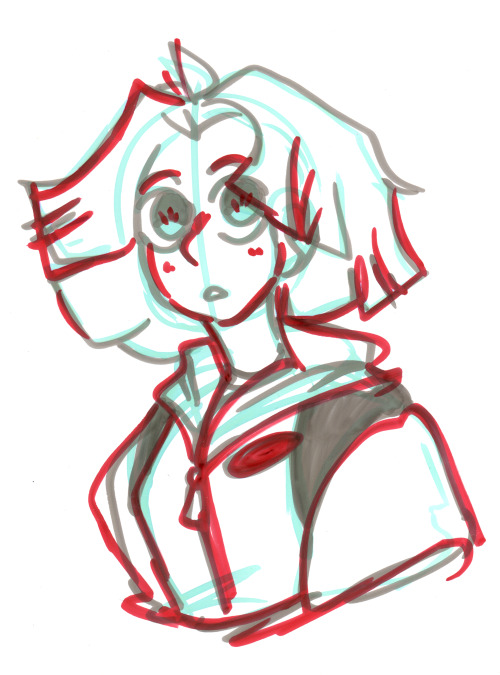 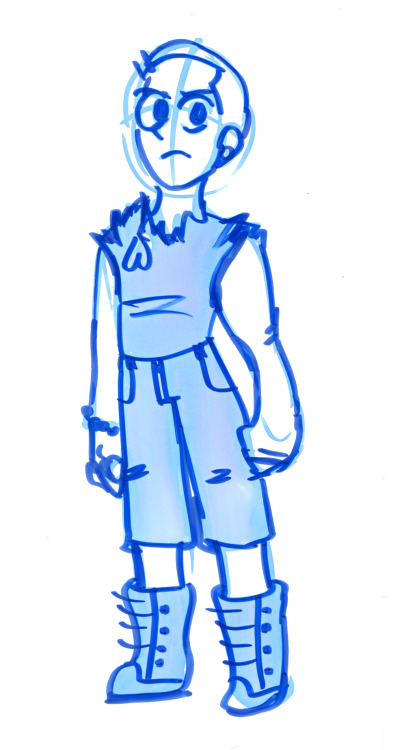 Meant to post these a while ago cause I forgot finished that sketch from an ask back. But honestly I love these two so much!

[ID: four digital drawings of the protagonists from Infinity Train book 2, each is coloured somewhat messily in a style resembling watercolour and brightly coloured geometric shaped decorate the space behind them. In the first Jesse, a thin Apache teenage boy dances with his back to the viewer. His blue and yellow letterman jacket reads “Pupfishy” across his back and head smiling. In the second, Lake, a teenager with buzzed short hair is made out of mirror or a chrome-like substance. She has a non-binary pride flag wrapped around her shoulders, face paint to match and is smiling proudly. In the third Lake and Jesse’s younger brother, Nate, are dabbing. Nate looks like a smaller version of his brother and has a cast on one arm, a speech bubble shows Jesse off to the side, sticking his tongue out in disapproval. In the final image Lake stands holding a cat over her head, she frowns and sticks her tongue out at it. /end ID]

Seriously considering risking my computer getting about 100 more viruses from bootleg websites just so I can watch this show again. I miss them so much, so here’s some “off the train” content

A small attempt to help feed the hungry Infinity Train fandom,, I miss these two as well guys,, I swear CN/the crew better at the least release some shorts to show what happened with them after the train 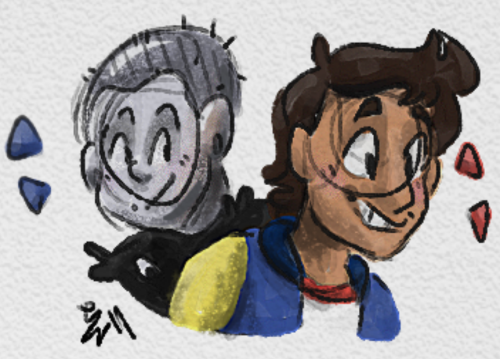 A comic I will most likely NOT finish (’:
So anyways what if the Apex found Jesse before he met MT and AD? 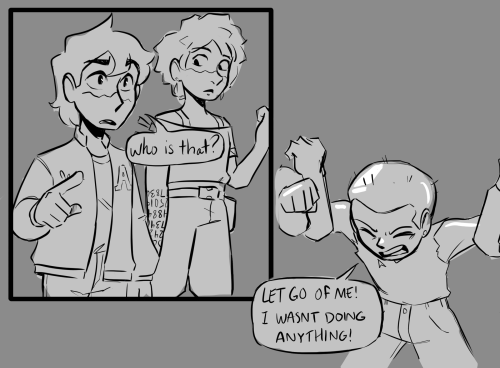 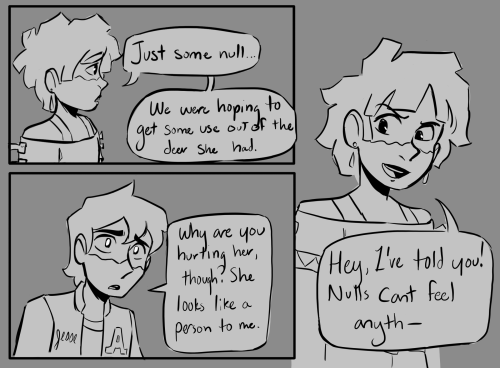 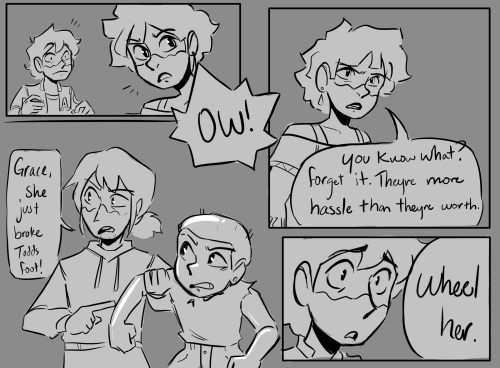 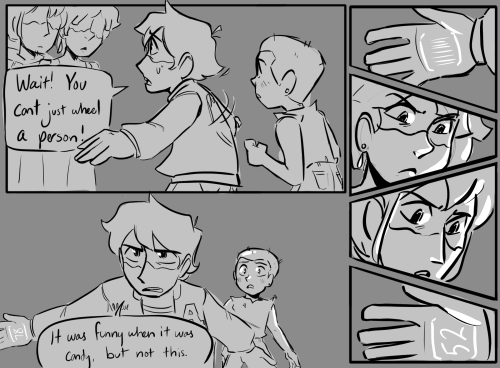 I bet Lake will inspire more reflections to run away. Wonder if we’ll ever see One One’s reflection again? 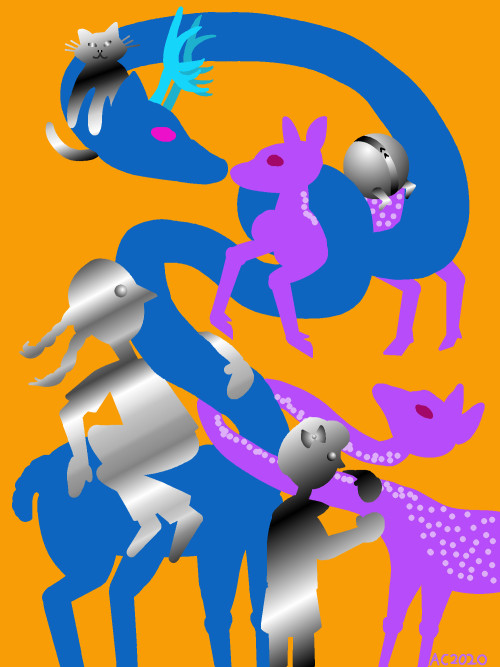 I decided to finally draw something with Twin Markers again, and now I´m reminded why I never use them anymore. I have a whole pack of Twin Markers with different skin colours, but none of them were right for Jesse. So I ended up trying to mix different colours to get it right. It´s not entirely right yet, but I was afraid I’d ruin the drawing by mixing even more, so I did some touch-ups in Photoshop to try and fix it. I’m not 100% happy with Jesse’s skin yet, so next time I’m going to test all my markers first to see which colour is the best match.

I still wanted to post this drawing, because I like how the rest of it turned out.

Do not re-post without permission!! 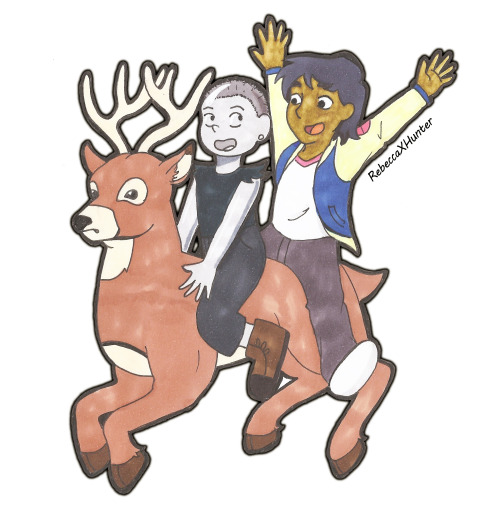 Infinity Train: Tulip no longer has a reflection after MT escapes.

Me: Okay, makes sense. Not by the laws of physics, mind you, but still.

Infinity Train: MT has a reflection. 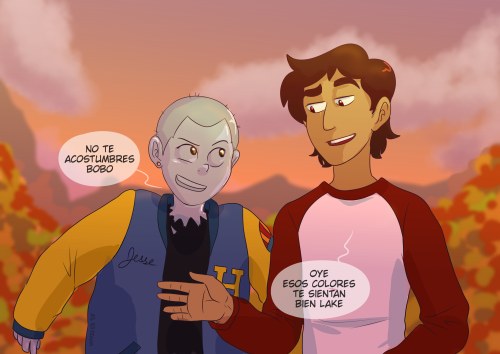