sharing this ink moth i drew as a gift for a friend :^) i don’t do ink illustrations very often but the process of building up shadows is so therapeutic Baby Glaurung, featuring his dad, Melkor. Little Glaurung looks like a potato. But he will grow up to be long and strong and big and wreak havoc. Ink drawings. 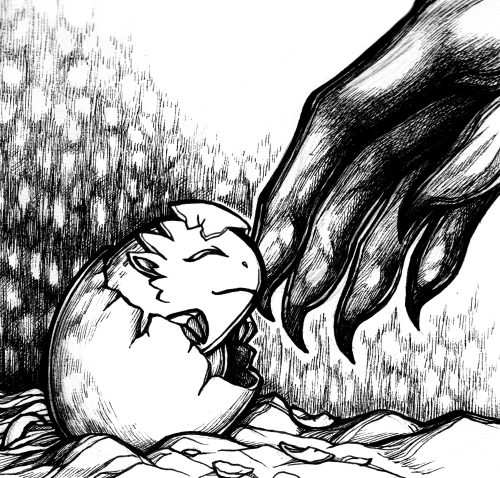 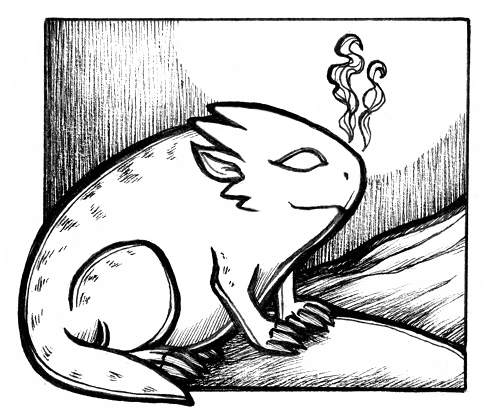 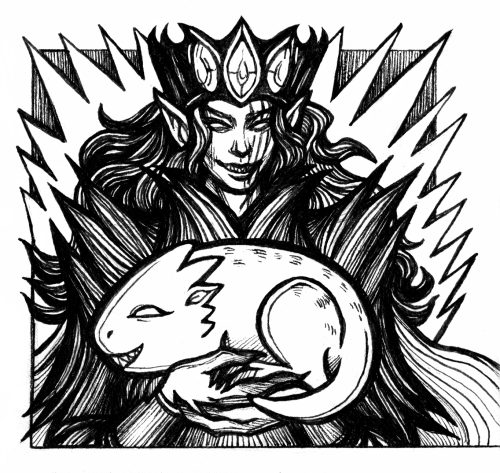 For day 228 of 365 Days Wild I spent some time watching and sketching the blackbirds in the garden.

Usually I’d include some photos as well, but I didn’t manage to get a single clear picture the whole time I was watching them.

By the time I was done, I had three little blackbirds on a page of my sketchpad.

If you’re from around here, you probably know this already, but some really weird stuff happens in this city. No? Just me. Well, probably. Whenever I bring it up with people it barely phases them.

Like the last Summer Solstice. I was out in Hyde Park celebrating in a completely responsible, socially distanced way with the local Pagans. We were there from sunrise and cheered as the mighty king rose over the horizon. We stayed all day watching as the Sun rose from the East until it was high overhead. Then it… hung there for a bit. And started moving back towards the East. It sank lower and lower towards the Eastern horizon and eventually set, to much applause from the Pagans.

I was like, “Doesn’t the Sun usually set in West?”

I asked them. “That was pretty weird, right?”

They just shrugged. “I guess.”

I mean… that was pretty weird, right? Right? It hasn’t done it again since, so doubt it’s anything to worry about, but, wow. That was weird.

Anyway, that’s nothing to do with what happened today.

Town was quiet. I had been working on some job applications at Flamingos Coffee House and was on my way back to the bus station to go home. Walking down York Street, there was an oldish guy in front of me walking in the same direction. He was wearing a ratty grey suit, had short, grey hair, and blew plumes of accrid grey smoke behind him as he walked. I’m an ex-smoker so not a big fan of second hand smoke. I slowed my pace down to avoid it.

As we got to the NCP Car Park, I spotted something fall from his pocket. It looked like a wallet. I jogged forward and picked it up. Definitely a wallet. I shouted to him to let him know and he froze on the spot and spun around like he’d just heard an explosion. He stared at me with this weird intensity. I swear I am not that scary! Then in a flash he sprinted off down a side street towards the outside bit of Leeds Market! Golly, he was fast. I ran after him, waving his wallet over my head as he disappeared around the corner.

I rounded the corner and he was no where to be seen. There was nobody there at all. But I could still smell the smoke. I looked down, and saw a small grey cat crouched down staring at me. Its ear were all the way back and hair standing on end. It leapt away and disappeared under the stalls of the market.

I mean, I guess that was pretty weird. But the weirdest thing was seeing the cat had a lit cigarette in its mouth. Do cats smoke? How would they even light a cigarette? Can they read the health warnings on the packaging? So many questions.

No idea where the guy got to. The wallet was empty except for a bit of change, including an old Dutch coin. I’ll keep hold of it in case I come across him again.

drew these while watching a documentary about a comic artist

Drew Minerva with Breezy 💕 I think she deserved another pretty picture!! 🦋 ✨

I still don’t always understand how to ink fabrics and clothes and how to fill big dark areas so that it looked good and the atmosphere of a drawing wasn’t lost. Aaah, so much things to learn and practice…

In fact, I like to draw myself but don’t really like to post it as I feel pretty cringy about drawing myself nicer than I am in real life. But here, the face is hidden, so it’s fine.

And just one more thing: it would’ve been more accurate to call it “self-portrait-2020″ because in the process of drawing I found out that I’m not in this state anymore. And, you know what? It feels like a relief, really. 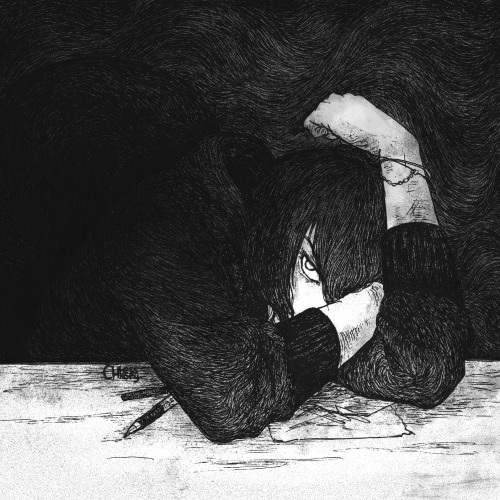 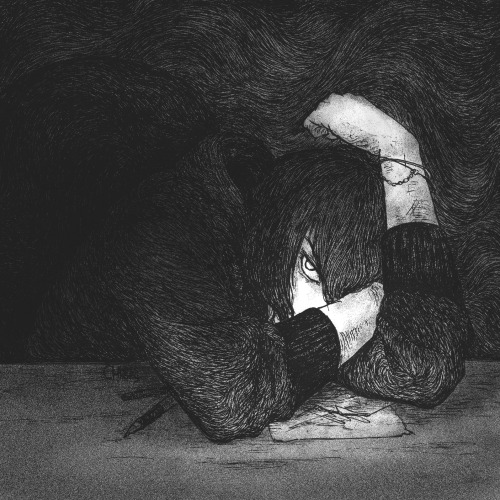 This was the same woman changing places so I could have a second attempt drawing her. 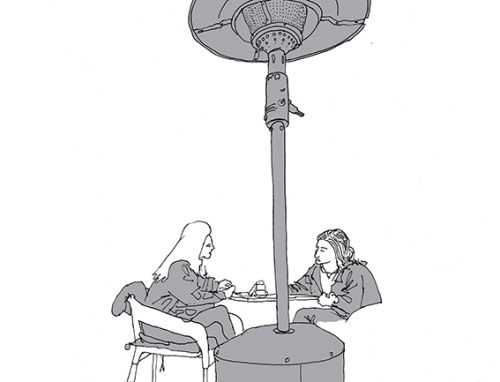 Inspired by a twitter friend; a penguin piloting a mech suit.

(I have been made aware that the penquins resembles Gunther from Adventure Time, but i kind of forgot about that show to be honest.) 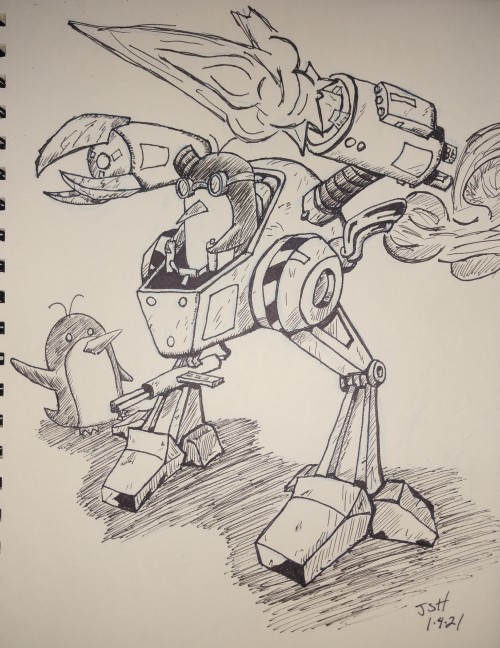 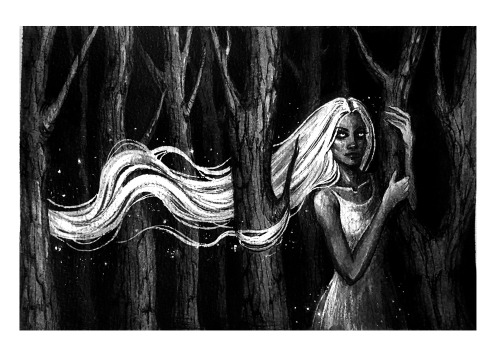 6/26 in an alphabet sketch challenge from Micayla Garza (IG: @/lukewarmhands)

We are an unusual couple you know 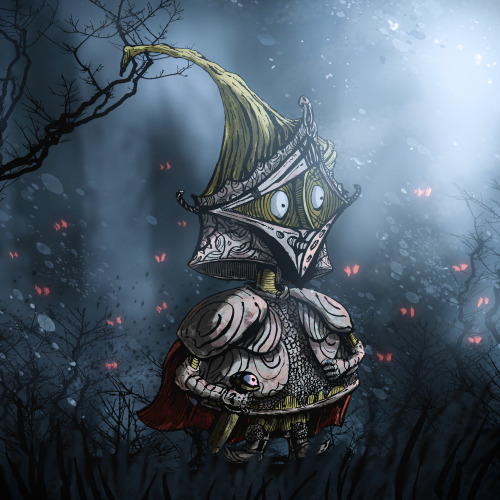 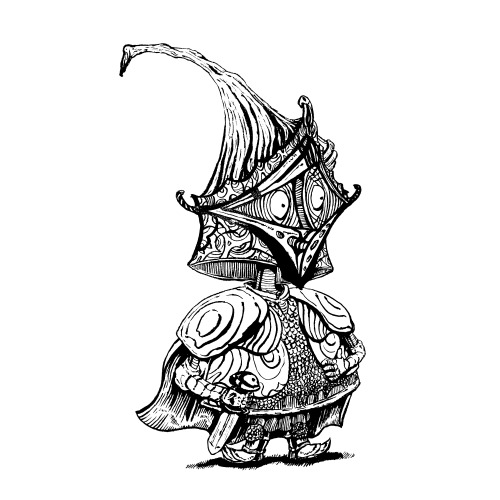 So, the unanimous opinion from my last two posts has been in favor of the uncropped version with surrounding doodles edited out. Thank you for sharing with me! In other news, got my antibiotics today. Yay! 😷