shoutout to the fact that I’m about to hit the 2 year anniversary of into the unknown, originally titled vuelie. I’ve done a lot of revamps and recycles, but vuelie is where the groups massive as fuck map was made, and it originated with the release of the first teaser for Frozen II. And here we are, almost 2 years later and I still do not have the main plot figured out. I got distracted by all the side plots and world building. //sigh// I know it’s like my fault there are so many countries that need to have their governments built and filled, but still. 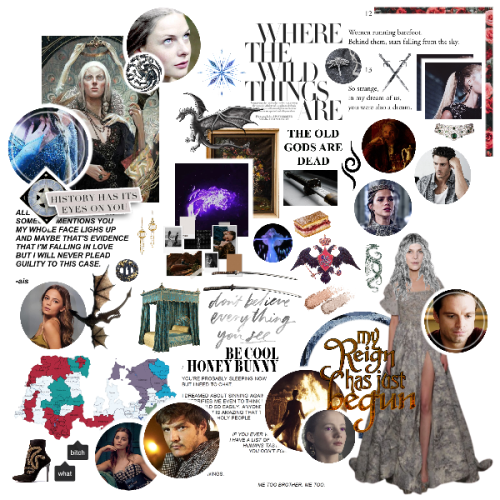 Arya smirked up at him. “What’s wrong, old man?” she asked. “Cat got your tongue?”

Viserys blushed. He was possibly as crimson as her dress. And his eyes just as dark.

I’m the dried roses in a book,

I’m the sadness in his look,

I’m the feel of an ancient castle,

I’m the eyes that holds the Hazel,

I’m the moss in an abandoned garden,

I’m the cold breeze of autumn,

I’m the crystals of ice,

I’m the tears in his eyes,

I’m the first kiss in snow,

And I’m the feeling of a dying soul..

Of some sugar, honey, and maybe cream

So hot and spicy

To ease the pain

Of my unsettled woes

To ease the strain

On my severed hopes

To soothe my throat

After all this crying

To give me life

When I feel I’m dying

I can heal my pain

Take joy in each sip

From the cup that’s…

Expedition through the Otherlands

They were to go to Dragonstone.

Naerys barely remembered the ancient Targaryen keep and only remembered being with Alys. The thought of her sister made her hug her Uncle Bran even more. Because he only had one arm, he was made to stand aside and watch as the servants and the rest of the family made sure that everything was in order.

Alys loved Dragonstone because there were so many places the two could explore. Jaehaerys often did so with them, scaling the rocks and reaching for places they might see a dragon, even though their mothers had told them the dragons had died out long ago. The three of them had been so happy on Dragonstone, despite the gloominess of it.

But now they were going back without Alys and Naerys felt a hollowing in her chest. She snuggled closer to her juncos as he pressed a kiss to the crown of her head.

“It’s okay, sweet girl,” he said. “I’m sure you will have a good time on Dragonstone.”

Naerys pouted and her uncle rocked her slightly, perhaps to just readjust her, but she felt calmer regardless. “I want Alys.”

“Mm.” He kissed her head again. “I know, but Alys will always be with you, even if you cannot see her.”

Naerys nodded. “I don’t want to go to Dragonstone.”

Uncle Bran chuckled. “If I could convince the king not to take you, I would do so. However, I’m sure your mother and father want you with them.”

“Naerys,” her uncle said. “I want you to promise me something.” She snuggled closer to him and he sighed. “Never be alone with your father’s aunt or with the two men called Baelish. Can you do that for me, sweet girl? Can you promise me?”

Naerys didn’t know why her uncle was asking her to make this promise. It just didn’t make sense to her, but she nodded anyway. “Okay.”

“Good girl,” her uncle replied firmly. “Now it’s time to take you to your father so he can situate you and your mother and your sisters into the carriage.”

She would have known the second she was taken into her father’s arms even without the bell. She snuggled into his warmth and the smell of her father’s cloak. He kissed her too. The stubble of his beard scratching lightly against her skin and she giggled.

The sky feels so close, like you can touch the stars, but yet so far away.

Into the Unknown and moonshadow elves…..

Specifically, Into the Unknown performed by Aurora is VERY moonshadowy.

The scene with Lujanne at the Moon Nexus, and the scene where Elsa, in the movie, sings Into the Unknown. To me they are very similar. Both, in a way, revealing stories with magic.

Moonshadows are all about ~illusions~ and being ~mysterious~ or whatever.

[tl;dr Aurora’s performance off Into the Unknown gives of major moonshadow vibes imo.] + I don’t know how to use this app smh

..and you became the light that couldn’t shine in my darkness..

Me, kulning the siren part of into the unknown: Find me an adventurer

You ever just want to hit the road with no word, no communication, and just travel and meet new people and try different things? I swear if and when Rona gets handled I’m just gonna disappear