Hot take: Souta and Sesshomaru fighting over custody of Towa once everything is settled.

I have a personal request for the sessrin fandom.

There is a nasty ice storm that has run rampant in the armpit of America that is Oklahoma. And there is no power due to the ice trees that are knocking down our powerlines left and right and we will be out of power for a few days.

(Ooooh shit….. the tree next to my window is literally about to break my wooden fence to pieces!)

So if it isn’t too much trouble…

Can you guys just send some awesome sessrin content to the group? Fics, memes, fanart (preferably personal or with permission from the artist), even just a shlutout of love. I need the distraction. Its pretty gnarly over here.

2020 just keeps getting better and better.

God I am SO GLAD that SessRin is real.

Fair, there’s one example of this sort of relationship taking place in RT’s works. But there are a LOT more examples of age-appropriate couples in her comics. If she had a HABIT of writing older men meeting and acting as guardian to girl-children only to marry them later on, I’d consider that a pretty big indicator of that being the case with Sesshoumaru and Rin. But not only does she normally not write those types of couples (one example notwithstanding), she’s done everything she could to personally avoid actualizing the pairing in her work, and still, to this day, refuses to address it. One of the only questions that she had more than a written shrug for in her most recent interview is the one where someone was probing her to say Sesshoumaru used a certain word for “scent” for Rin because she was his love interest, and RT said he and Inuyasha used the word referring to allies and girls, not love interests specifically. She essentially shot it down, even if she didn’t outright say it was “wrong”. Since she’s not exactly a JK Rowling, telling readers exactly what to think YEARS after her series is done, I doubt she is interested in disallowing her fans from making whatever interpretations they’re apt to make about the parts of the story they don’t see, but you’d think if a COUPLE she had intended from the beginning was a thing, she would have said something long before a sequel was even in the works.

So yes, cherry picking one relationship in one work of RT’s might superficially support the argument that she intends the same for Sesshoumaru and Rin, but it would be ignoring a lot of meta context.

Which is more tsundere, Inuyasha or Sesshomaru?

Both are, Inuyasha in annoying immature way and Sesshomaru in serious ice king sort of way.

#change my mind, #you can’t, #the song is an absolute serve, #it was made for them, #and I just love the song lol, #inukag, #inuyasha
0 notes · See All
boycottyashahimeAnswer

See them, nothing - Sunrise are shippers themselves. They’ve been pushing the pairing in various ways ever since they secured Inuyasha as a property. I have no doubt that they’ll continue to push it in this new show, even if not overtly validating it by making Rin the mother. They may maintain the status quo by pushing in a way that antis can ignore while they watch, but it’ll be there, no doubt.

So the visibility of the shippers isn’t really a factor at this point, since Sunrise is just going to do what they’re going to do. It’s unfortunate, but if the worst should happen, it’s easier than ever for folks to ignore the sequel now that RT has admitted to having virtually nothing to do with the story. I know people seem to value retcons and additions more when they come from the original author, so this is a huge relief for a lot of antis. I hope you can take comfort in the fact that RT just did the character designs for the three main girls, and you can disown what Sunrise does with them if it gets too upsetting.

Hang in there, querent.

Lady Moroha, the daughter of Priestess Kagome and half demon, Inuyasha and the grand daughter of inu no taisho, Toga and niece of daiyokai, Sesshomaru

WIP for KaguraWeek 2020! Hopefully I’ll finish this in time.

This is a video that was brought to my attention by @shortieluwho and HOLY SHIT. This needs to be watched by all sessrin fans. This is a fabulous analysis on the ACTUAL relationship between Sesshomaru and Rin and….. please! As a sessrin girl, I implore you to watch it.

I would argue that antis need to watch this, but I refuse to add that tag on here. Thank you so much to this creator and their dedication to the fandom to be able to make this. 🧡 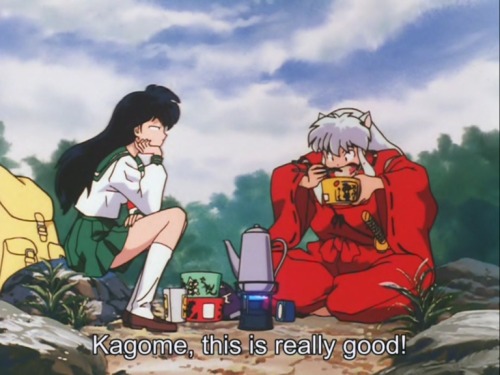 #Getting into the manga again recently, #Let's hope I can finish it this time, #Because Inuyasha got really draggy somewhere in the middle, #And I have yet to finish the manga to this day!, #Anyway love and never tire of this scene, #Not my GIFs or caps if that wasn't obvious, #Unable to determine sources, #Inuyasha, #Kagome, #Anime, #Manga, #Food
3 notes · See All
ladycelestiteText

Q: Regarding Kagome’s decision to live in the Modern or Feudal Era; it felt as though Kagome herself made the decision rather than “a decision prepared by the author”. Were you thinking that you wanted Kagome to decide for herself?

I was at a loss when it came to Kagome’s decision so I asked Kagome’s voice actress, Yukino Satsuki, “Which would you pick” and she immediately responded with “I want to be with Inuyasha”. When I thought about it, Kagome could never forget Inuyasha and if she chose the Modern Era, she would probably live as though half of her soul had been taken away and that seemed cruel. Rather than “the Feudal Era”, I would say “With Inuyasha” was the best way for Kagome to live.

Sesshomaru and Rin are married 😌♥️

i shed the pain and emptied my heart, i took the time to clean out the clutter and dump out the useless collections. you were the one i held onto before i finally let it go, i felt the goodbye ripping into me, you ripping away forever. a ghost is what you were? a dream perhaps? all i know is when i opened my eyes you were already long gone. the night the moon looked down on me i thought she was being unsympathetic but she was telling me to move on girl, waiting for my next move. my heart yielded, but this time i left with no tears numb from distance, diminished over time. yes, its finally gone. soulmate, twin…it never mattered to me when we would fast walk through the breathing trees. i saw you in my dreams looking right at me wearing green, even though i think about it i wont find out what it means. no more struggles, im not coming and you don’t have to come for me.

Please stop making memes/posts which belittle the anti agenda to trying to win “shipping wars.” That is not what this is.

Some antis ship SessKagu, some ship SessKag, some SessMir. Some of us think Sesshomaru is asexual, but at the end of the say all of us agree: anything is better than Rin.

We do not care who Sesshomaru ends up with. So long as it does not make him a groomer (which if it’s Rin, yes, that makes him a groomer. And no, you are not going to change my mind.) We don’t want our favorite show ruined because they decided to make an unnecessary sequel that promotes a grooming dynamic.

Underaged girls dating adult men is already a huge issue in real-life modern society, the last thing we need is another piece of media showing this dynamic as a “healthy” option.

That said, I would like to also say, please actually look into the “fandom drama” before you make the claim that “antis are the bad guys, they’re the ones harassing people over their ships!”

Anytime anyone posts Sessh x (anyone who isn’t Rin) on twitter, they get attacked by Sessrinners. Not anti-sessrin posts, just shipping posts that aren’t sessrin. I know many people who refuse to go on twitter for this reason, or go on but are too scared to actually write anything for fear of being attacked.

Sessrinners have also been sharing anti blogs on tumblr and asking people to mass report for no reason other than that they’re anti.

Sessrinners also go out of their way to invade anti spaces, which antis do not do. I know of two separate incidents, though I will not go into detail to protect those involved, but one anti group chat on tumblr actually had to relocate after being repeatedly stalked by sessrinners. Meanwhile, the sessrin group chat remains unbothered.

I know a Sesskag shipper who is PRO SESSRIN but they got hate mail from other sessrinners for writing fanfics that were sesskag.

Sessrinners are known for harassing, bullying, stalking, and name-calling anyone who disagrees with their ship (even if they disagree peacefully), and anyone who ships Sesshomaru with anyone who isn’t Rin. If you don’t believe me, look in the tags. Talk to antis. These stories are EVERYWHERE. Because it happens to all of us all the time. Do not believe them when they claim to be the victim.

One last point, and this is for any Sessrinners who might be reading. The vast majority of antis have NO BEEF with Sessrin shippers who acknowledge that their ship is problematic and are not pushing for it to be canon. You guys keep doing you, and I’m sorry that your fellow Sessrinners act the way they do. I hope you know that when antis make these posts, we don’t mean you.

Everyones asking “ Wheres the parents” but nobodys asking about the best boy Ah-Un.