based on the fact that,, fuck you I wanna write about Harley’s health problems.

okay so, first thing first? Harley’s? Going deaf. When he was younger, it was classified as mild hearing loss that he was born with, but a he grew older it slowly grew more severe. They don’t exactly know why, but they think a part of the reason is that he works in a lab with loud bangs and noses without ear protection. But they dont know why he was born with mild hearing loss. He builds himself special hearing aids at sixteen, that weigh almost nothing, and cost even less. He gets them patented by SI and essentially helps millions of people all over the world get more affordable and efficient hearing aids.

he was also and extremely sickly kid until he was like.. nine. then he only got sick every once and awhile. But because he was so like.. sickly and sick, he had to stay home a lot, which led to reading a lot, which lead to wanting to do the things he read, and let me just say, he read a car manual once and managed to pry open the front hood of his car. so he was sitting there with strep throat and learning the parts of a car by the time he was three. His mom used to be a stay at home mom, so when he didnt understand, he’d climb into her lap and point to a word and ask. When he was a kid, it was like,,, strep every few weeks and an occasional stomach bug, but as he grows older its less frequent but when he does get sick its a little more severe.

and now for his heart problems: he was born with two conginital heart defects, but one was discovered when he was born, and fixed up. The one that was discovered was leaky/weak valves (atrial septal defect), meaning that blood flow wasn’t doing the thing it should. That was fixed. But they missed a very small hole in his heart that steadily grew as he grew- and got progressively worse as he grew older due to stress and the ammount of caffine he intakes. By the time they found it and fixed it, it had a lasting affect on both his health and his heart, making it pretty weak and making it have developed and irregular heart beat. He gets a pacemaker at age seventeen and thats? kinda it. He has to avoid caffeine point blank, and not get into anything too stressful, but yeah.

It doesn’t really affect his super heroing, and he actually uses a mini arc reactor to power his pacemaker. But- it does lead to all of his friends and family being pretty against him being a super hero. He doesnt listen, but he does take it easier than Peter “im-gonna-throw-myself-into-danger” Parker.

Peter: whoever ate the chocolate cake Harley and I made, I hope you have a shitty day.

Harley: LOL, shitty day you crack me up Peter

Harley: We put laxatives in the cake.

Harley: [accidently gives Morgan a paper cut] oh sweet summer child! Do you need the first aid kit? Stitches? A cast? How can I ever make it up to you?

Harley: [Accidently shoots Peter] Get up loser, you’re fine. Stop getting blood on the carpet. We’ll just chalk this up to a whoopsie-daisy.

Harley: WHAT?!?! You think Vision is more threatening than Scarlet Witch?!?

Harley: but-but she can levitate objects, brain wash people and READ MINDS! What’s scarier than that?

#marvel, #avengers, #mcu, #peter parker, #spider man, #spiderman, #comics, #harley kenner, #iron lad, #spider lad, #parkner, #parley, #scarlet witch, #wanda maximoff, #vision, #wandavision
257 notes · See All
lilacsandlilies4Answer
Can I get parkner for either anger 16, bliss 7, or terror 10. Like only one prompt at a time not all together lol

Sorry for taking so long. This may have gotten slightly out of hand. I only intended for it to be around 500 words, but it ended up being about 5000. I couldn’t get all of it on tumblr, so I put a link to ao3 below. I hope you like it.

Harley didn’t know how things had gone so wrong so fast. It was supposed to be a normal patrol, just Spider-Man and Iron Lad working the streets of New York. The next thing Harley knew, they were in a fight against someone who had used some type of blast gun to throw Peter down. Harley threw a quick look at his boyfriend. The bloody and bruised lump of red and blue fabric wasn’t moving and fear threatened to swallow Harley whole. Luckily, the guy they were fighting was in a similar situation. It took all of Harley’s control not to abandon the fight and run over to Peter. Harley shot down the man and told his AI to call the police before rushing over to his boyfriend.

“Peter.” He gently shook Peter, but he got no response. “Karen, vitals?”

“He is in critical condition. Get him to medical attention as fast as possible.”

Harley gingerly picked up Peter before flying them both to the tower and straight to the medical room. He stepped out of his suit and called Tony and Bruce down. The two men quickly came running in. “Harley what happened?”

“We- We were fighting someone and then he hit Peter with some weapon or something, I don’t know what happened. There- There was an explosion.” He turned to face Bruce, almost begging him. “Tell me he’s going to be ok.”

Bruce just gave him a worried look as he started to prep Peter. “I hope he will be. Now both of you need to leave.” He tried to shoo Tony and Harley out of the room as he started working on treating Peter’s wounds.

Tony grabbed his shoulders. “C’mon. We need to go.”

Harley tried to plant himself there, but instead he just broke down, reluctantly moving as Tony pushed him out of the room. He slumped into a chair nearby, tears forming in his eyes. “I should have done something.  I was right there.  I should have kept him safe.”

“Then you would be in that room and Peter would be out here crying about how it was his fault.” Tony looked Harley straight in the eye. “It’s not your fault. Both of you know the risks, you do it anyway. He knew this could happen. It’s not your job to take everything for him. Now come on, you were in the fight too. Got any wounds?”

Harley just shook his head. “I still should have done more.”

“You couldn’t have done more. Now let me see your wounds.” He grabbed a first aid kit from nearby and tried to treat Harley’s injuries.

Harley pulled away. “I’m fine. It’s Peter you should be worrying about.”

“Bruce is taking care of Peter. We can’t do anything else about that. But when he comes out of there if he sees you with all of these bruises, he’s going to yell at me.” Tony nudged Harley, trying to get him to smile.

Tony just stared at Harley. “You need to take care of your injuries.”

“I don’t have any that matter.” Harley could feel the beginnings of tears in his eyes at the severity of Peter’s injuries.

“Kid.” Tony tried to get Harley to react, but he couldn’t. Instead he just pushed the kit into Harley’s hands. “At least do something about them eventually.”

Harley: [flying in his suit of armor] IS THIS TO FAST FOR YOU??

Peter: [sticking to Harley] NO I ACTUALLY THINK YOU SHOULD GO FASTER!

Peter: YEAH, THAT WAY WHEN WE CRASH I’LL DIE ON IMPACT

a simon vs the homosapiens au where peter and harley start talking thru emails because they are the only gay people at midtown, and both develop crushes on each other, while at the same time like each other in real life, so they are both conflicted because 1) they’re gay and 2) they have a crush on two separate people at the same time. cue antics and pining and an eventual reveal of themselves and their love (bonus points if peter also reveals he’s spider-man)

News reporter: we are heading to you live to Stark tower where it appears that Stark tower has caught on fire, yet again.

News Reporter: here are some of the avengers now, do you have anything to declare?

Bucky: YES! LOCAL DUMBASS OWNER OF A BILLION DOLLAR COMPANY SET HIS OWN BUILDING ON FIRE BECAUSE HE MICROWAVED A SPOON ‘FOR SCIENCE’

Tony: It wasn’t ‘for science’ I wasn’t testing anything! I already know what happens when metal is in a microwave! Give me some credit.

Steve: he’s right Bucky, he didn’t do it ‘for science.’ He did it because he was dared to by TWO TEENAGE BOYS!

Peter: We didn’t think he’d actually DO it!

Harley: Man, it was so f*cking worth it to see those sparks!

Steve: the scientific minds of the future ladies and gentlemen

Peter: [walks by in his Spider-Man suit]

Harley: bitch what are you doing out here with all this ass??? Double cheeked up on a Thursday afternoon, Hella ass. the sun is still out-

Peter Parker: [pulls his hand down]

Shuri: how do you two keep getting into messes like this?

Peter: [webbed to a rotating ceiling fan] because I’m a f*cking idiot.

Harley: [webbed to Peter] because I’m f*cking a idiot.

Harley: [walking into the street]

Peter: Harley! Look out for the the Dodge!

Harley: Dodge what? [gets hit by Dodge car]

Peter: [sobbing] why God? Why me? Why did you bring these country folk people into to my city?

Maury: Steve when it comes to 17 year old Harley and 16 year old Peter…..you are NOT the father!

Maury: Wait….Hold it….Tony Stark, when it comes to 17 year old Harley and 16 year old Peter…..you are ALSO NOT the father!

Harley: uhhhhhh…..what was the point of this again?

Tony: We just wanted to let you know that you were adopted. We figured this would be the best way to do it.

Harley: Tony, Of course we know that we were adopted. How stupid do you think we are-

Tony: All I wanted to know is who threw Dum-E out the window

Pepper, trying to read Morgan a bedtime story: Five little monkeys jumping on the bed. One fell off and…

Peter, interrupting her: Was diagnosed with mesothelioma.

Harley: You might be entitled to financial compensation if he or a loved one dies.

Teacher, yelling at Peter: Look at Harley, he works so hard out of school and still finishes his homework on time, aren’t you ashamed of copying his work?

Harley, knowing he copied Peter’s homework but submitted his work first so it doesn’t seem like he cheated :

Ok MCU fandom, You can only have one of them show up in the third Spider-Man movie:

Which do you choose? 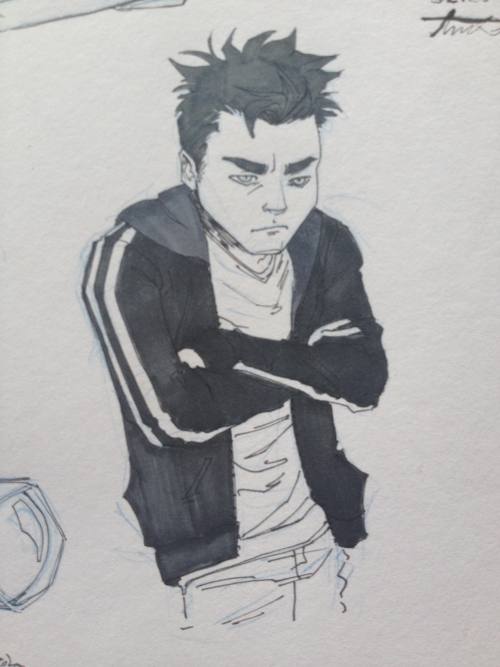 Peter, sticking his hand out for Harley to shake: hi, I’m Peter

Harley, moving to shake his hand: and I’m-

Harley, seeing how attractive Peter is and freezing: *under his breath* super fucking gay