Damian: we may have all died, but the only one powerful enough to kill me is me

Would it be too generic to name my Din Djarin x self insert oc series “A Clan of Three”?

in which dean has a Dad Moment bc jack is definitely his (and cas’) son :]

#hello#can u believe it’s canon that they have a son?#🙄🤚🏼#anyway#i just want dean to have dad moments#to be able to be a better dad for jack than his dad was for him#along with the love of his life cas ofc :)#spn#supernatural#dean winchester#jack kline#awww yeah baby#my art#erieart#spn fanart
4 notes
chelofvenus
Text

not that i don’t enjoy being a f2p player, but if you catch me spending money for that hu tao banner even tho she’s a similar play style to xiangling,,,, no you didn’t,,,,

#genshin#delete later#listen... listen... the devastation i felt when i pulled for the final time on zhongli’s banner and didn’t get him :/#can’t risk a serotonin crash like that during semester time guys i can’t risk it#also i think it’s hilarious that EVERYONE canonically despises her because she’s an absolute menace seemingly unprovoked#like qiqi is my BABY (who i have yet to pull rip) and the possibility of putting them on the same team will not be robbed from me#also i love love love playing with xiangling (i main her and xinyan because i don’t care about balanced teams); so IK i’ll love hu tao :)#slowly making my way towards that all polearm team#anyway since i’m ranting about genshin: PAIMON!!! SO CUTE!!!! changed to the jpn audio and i have no regrets :)#i lied one regret - kaeya sexy in the eng version and i keep subbing him on and off my team and i miss his flirty drawl#kaeya really pulled me into this game like i started playing for zhongli and i stayed for kaeya :)
0 notes
patiencetaught
Text

“Is it really so bad? To spoil them a little?” He questions innocently, still gently rocking the newborn, seeming to refuse to let them go a minute without being in his arms– he can’t help it! He’s still reeling from the fact that they had a little one!

And Setau always said he’d be as good a father as Idris was to him and never be the sort of father Thoth was. That meant giving their precious little one a lot of attention. “I–I promise, I won’t spoil him when he’s bigger…but, I mean,” He smiles brightly showing off their son. “How can you not? What do you think Matilda?” He asks, brow raised as if to try and get her on his side. “It’s not so bad, right?”

Matilda considered the squirming infant for a moment, clearly giving the question serious consideration. After all, this baby was not the cute little bundle of joy that was on diaper commercials. This one was still shriveled and pink and funny looking. Not to mention that the little girl was already feeling strangely isolated, despite Setau’s efforts to include her in this conversation. After all, she’d been the center of her mother’s world for a few years now and now she was being forced to share with this squirmy little thing. Of course, she wanted to be a big sister too. She had too many memories of her older brother Michael throwing food at her and generally tormenting her, and she didn’t want this baby to feel the same, even if she wasn’t totally thrilled about its presence.

“I don’t think letting Setau hold it is gonna spoil it, mum,” the little girl pointed out diplomatically. “Babies actually thrive off of human touch. You can kill a baby by not touching it enough.” This line of reasoning is enough to get Jenny to smile tiredly at her oldest child and gesture for her to come sit next to her on the hospital bed.

“Fine. Maybe I wasn’t worried so much about spoiling the baby and more about the fact that their father won’t ever let me hold them.” An eyebrow is arched playfully in Setau’s direction, her words a clear attempt to tease him.

#this is so old holy shitttt#it was at the bottom of my drafts and i just saw it and uh...#i want more jenny and setau#i want more mama jenny#this checks a lot of boxes#but feel free to ignore#given it is so old#also?? baby name? any ideas?#❝ it isn’t much but it’s enough for me ❞ ⟨ IN CHARACTER ⟩#dxspereaux#.•° ✿ v; and just as bad as life was that’s how good it became ⟨ POST CANON ⟩
1 notes
aswebeg
Text

It has been a privilege to see off another part of superwholock (and its baby siblings, looking at you, Merlin fandom) with all of you.

See you all when the tapes are released. Ramble on.

Ps. w*ncest is shite pass it on

What do you mean it’s not canon ?

#I’ve made this in like 1min#I’ve made it quickly because I wanted to draw my mc but I was scares to forget it lol#anyway It’s what 100% happend#Mc is now canon I don’t want to hear anything#Just thinking about how less complicated harry potter would be with Mc omg#Harry Potter : Wow Bill is so cool. AND HE’S BEST FRIEND WITH MC OMG 😱😱😱#Bill Charlie Tonks Mc are the coolest people Harry meet#harry potter hogwarts mystery#hphm#jacob's sibling#harry potter#hphm mc#I must also say that Mc is part of the friend who helped with the baby dragon like DUH
15 notes
chromecast69
Text

#sometimes things should die on screen#not 2 b morbid but like u expect 2 see a slug get feed salt and it like reverts into baby form rlly???#that just takes me out of the moment honestly#or do they have like a canon explanation for this#like it’s natural for things 2 die and I feel this is such needless censorship
3 notes
yourpalpalpatine
Photo

idk what show the rest of you watched, but the season actually ended with Din getting his son back and then taking him on vacation to Space Disneyland just to relax for once. Unfortunately, Grogu is too little to go on any of the fun rollercoasters, so they’re stuck on the little kid rides :3c 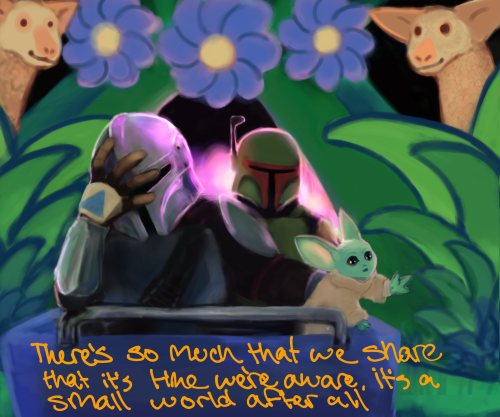 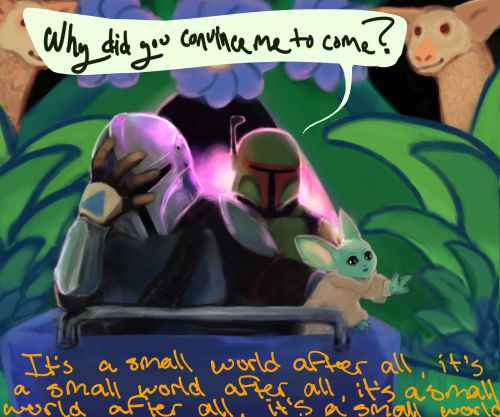 People have really atrocious opinions about the Jedi on this site and like 90% of my issue is that this is tumblr so the logical fallacy that how you talk/behave is what you think/intend is in full swing and people here think you cannot be violent while being polite. The rest of it is Clone Wars and other Filloni based media blatantly retconning previously established canon that held for years.

#Jedi#Star Wars#they’re not evil but if you think they didn’t orchestrate their own demise you’re only paying attention to the most recent timeline#anakin wasn’t what they fucked up and did wrong on a grand scale#but the Jedi and the Sith are splinters from the same religion the Jedi literally birthed the Sith it is absolutely self demise#and the fact that they are working for the government but refuse to get involved in human rights issues is absolutely fucking corrupt#so is the fact that they are involved in the war#exhausting with you people#also yes#anakin was not able to adjust to jedi social structures because turns out they’re inherently abusive and only work for kids raised in them#because JEDI STEAL FUCKING BABIES WITH MIND TRICKS#and that’s been canon for a long ass time#so their practices can be as gently abusive as they want all their members have been brainwashed from birth#and why’s that? because the Jedi are afraid of the Sith so they do fucked out shit to avoid letting members fall#but the one who would have fallen all fall anyway#LMAO#because controlling people like that is bound to backfire it just is#it’s a cult#it is not a good thing#they are slightly past neutral on the negative effects on the galaxy scale#because they end up doing more bad than good on average#if you think about it historically within Star Wars lore that’s just a fact#that is a fact that the world of Star Wars states again and again#the most radical thing Luke did was ignore the law of attachment and save his father#and that’s in the first fucking trilogy#they have been telling us the Jedi aren’t infallible from day fucking 1
2 notes
lesbianyuugi
Text

man it’s like dean never got to be a kid because he had to be a parent in john’s absence and dean refers to cas as being like a child but as cas loses faith in god he too is forced into maturity just instead of as a human adolescent as a million year old elderitch horror going through the same maturity process as a human adolescent who just realized their progenitor is fallible and will never help them become the thing they choose to be and instead only expects them to conform to the thing they are “meant” to be and both of them now exist as these entities that appear as grown men but are at once infants and elders performing a version of adulthood they never practiced but were simply expected to embody and every mistake they made along the way was blown up exponentially to further their sense of doubt and confusion around their own selfhood and purpose and then jack. is born without a living father but believes so deeply in his father’s goodness. in his father’s willingness to fight and die for him. in his father’s love that his cry pierces through realities to wake him and bring him back home, to bring him back into existence, to give him perhaps his most true state of embodiment, so thoroughly convinced that castiel is a presence that he makes it so. knows on this instinctual level through his memory of cas from inside the womb that a father’s role is to protect and guide and nurture and believe you can be the best version of yourself AND that you are allowed childhood and allowed to question and wonder and doubt but never doubt that he loves you. and you don’t need to prove that to him, your own existence is enough.

#unfortunately I must say it again: castiel canonically queers fatherhood#spn#ziz watches spn#lots of thoughts here but this is like. the cliff notes of where my brain is right now#cas assigned father at birth#this is related to why I don’t mind that jack isn’t a literal baby I think it’s very important that he’s able to articulate feelings#in the same way it’s important cas did that in his early seasons
474 notes