Me: not getting THAT job (i have been whining about and it’s been stressing me tf out)

Also me: Not getting THAT job today but everyone involved trying actively to keep me aboard, and offering me shit to not getting me to leave this company.

#i mean...., #all these talks were POSITIVE AF, #i am sad obvs, #but not too sad??, #i know who is the new manager, #and i get A LOT OF FREEDOM AND GROWTH, #its vv liberating tbh, #and more money which is also always positive, #but was not my initial intention, #but i feel GOOD ok, #lots of appreciation, #its still weird because no go, #but still good process??, #iunno, #im good!!
6 notes · See All
capwisunText

how to deal with feeling stuff about things

watched the haunting of bly manor, which was very much outside my normal ‘thing’. i liked it a lot more than i expected but i really could have done without the last half hour of the last episode. really kind of soured the whole experience, honestly.

#i have more i want to say about it but i'm sleep deprived and haven't had caffeine yet, #iunno
6 notes · See All
thisisthehardestthingText

:| I haven’t written anything in so long. Will I ever write again? Who knows. Only time will tell.

#Tbf it’s only been two-ish weeks?, #I’ve definitely been away longer, #but that’s buying season for you, #Claudia rambles, #I’m so close to finishing the 1kevent though, #I should just DO it, #there’s some great prompts and characters left, #coming soon guys, #maybe tomorrow?, #iunno
6 notes · See All
jeadstuffText

#pixi text post, #mostly cuz I’m embarrassed that I got into it so late, #but also I know a lot of my moots read the manga so, #iunno, #I just feel weird about it on Twitter, #also want to keep my twit to like just precure fe and pokeani
0 notes · See All
mister-lucky-bunnyText

The two roommates together!

“Maybe Eri has a point though. Maybe I should go to the girl’s side more often, if he’s willing to shapeshift and go there with me…”

Writing neopets fiction again is actually quite refreshing, and it makes me want to draw the characters I write

Look, I know that I am by no means an expert in these things, but I fail to see how hiring The HU to do another piece for Star Wars is suddenly cultural appropriation? I mean, maybe if it were a non-Mongolian group doing an imitation, or if they were uncredited for their work? But that’s really not the case here.

you ever just put some music on and then realize that it’s at a point in the music and you go “WHEN THE FUCK DID IT GET TO THIS???”

#ask me about this hellhole, #ask me about halfkit/paw maybe, #or whatever, #iunno
1 notes · See All
imorphemiPhoto 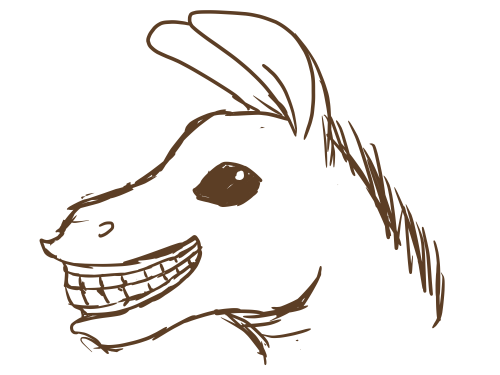 #my art, #george, #does this count as original art, #iunno, #donkey
10 notes · See All
theoriginaljordgeText

I’m convinced some of these people would go into a gas station and fill their cup with stuff from a machine and then tell the cashier they got a venti half light roast, half caramel cappuccino, four pumps of vanilla, three shots of espresso

Instead of just like, plonking down their frankencaffeine and looking the dead-eyed cashier in the face and being like “it’s coffee” so the cashier can hum and be like “99 cents” because coffee refills are cheaper than first time fillups and once you’ve worked in a gas station for long enough you stop giving a shit

Anecdote: someone once ordered a caramel macchiato at work way back before I’d ever even tried a Starbucks anything or knew anyone who drank it, so I was like “sure!” and brewed the espresso, mixed in the caramel syrup, and topped it with thick milk foam and the person who ordered it looked at me like “what the fuck is this?”

#my post, #personal, #and the reason i did a caffe one, #was because, #iunno, #i assumed the person ordering thay, #from a place called, #The Coffee Bar, #with item menus likr, #espresso, #americano, #caffe latte, #and iced caffe latte, #would be wanting coffee when they order something coffee
2 notes · See All
mister-lucky-bunnyText

If anyone needs me for voice work shoot a message my way n I’ll do my best! I gotta go to work but I’ll reply to stuff later if I can!

I’m depressed… and can do headcannons?

Iunno how this goes.

Anything from Fruits Basket and Naruto I guess.

And also a huge shout out to @mamey2422, @bourbon-ontherocks and the anons who send me this answer! <333

I know this must sound like the beginning of a newly crowned Miss Universe’s  speech, but I really never expected I See Your Technicolors would do as well as it did. But the amount of people who said they really didn’t think they would like it based on the premisse, and then raving about it in the comments, and the absurd amount of kudos it got is just… It’s kind of super weird (I don’t think I ever had a fic so popular) but all the love for it really keeps my spirit up in this whole pandemic - also because I just really like writing it, I’m sad already that it’s only two chapters left haha.

(Did got me thinking of doing a follow up later - but I was like nahh, ffs just finish this first, we’ll see about that later)

#THE LOVE FOR THIS FIC GOT ME LIKE uhgughughgu, #IT IS my happy place now right, #even though there's some angsty things in the next chapter, #maybe it's like Disney meets Grimm, #iunno, #my fic, #nbc good girls, #fanfiction, #asks
6 notes · See All
eclogaaText

am trying to do drafts…..am sleepy

#( ooc. ) ˢʰᵘᵗ ᵘᵖ ᵇᵒⁿᵉˢ, #maybe ill focus on plotting instead? ?, #iunno, #i dont wanna be inactive, #bc i was gone yesterday
4 notes · See All
herushinguText