or: how each of the captains spend their halloween, then how they spend their november 1st

He’s not what he seems.

Written for @hqhorrorweek​ Day 10: the fight of your life!

#not to toot my own horn but this is a good one!, #iwaoi, #oikawa tooru, #iwaizumi hajime, #hqhorrorweek
1 notes · See All
our-wargameLink
you're obnoxiously tall; i see nothing but you - Reign2Rain, SwordintheThrone - Haikyuu!! [Archive of Our Own]https://archiveofourown.org/works/26466601

tooru’s not going to stare for much longer. she and hajime are going to exit the scene, tooru’s going to go his own way and that’s going to be that.

fine, he’s a fucking liar. this fucking sucks. but he’s a rational young man. he set out to conquer volleyball through a ten-part plan; he’ll do the same thing now.

Notes: thought I posed it to tumblr, apparently i didn’t. i usually crosspost from tumblr to ao3 because it preserves the formatting but it doesn’t work the other way around so.

#iwaoi, #my writing, #angst with a happy ending, #friends to lovers, #it was supposed to be short but nope, #as always, #hope you enjoy thank you to commentors!
0 notes · See All
haikyuu-but-make-them-pukeText

NOTES: I wrote a little something for Halloween! I didn’t do too much editing, I just wanted to post something for the holiday, take more Iwaoi!! Also this takes place at a college in the USA because I didn’t want to research Japanese universities, I’m sorry.

Does anybody else think that Dr. House and Dr. Wilson have the EXACT same vibes as iwaoi?

Read this masterpiece on AO3 at https://ift.tt/3jMe3pG

Oikawa and Iwaizumi has been in a secret relationship for 6 months now. They loved each other. The only people who know about their relationship was their teammates.

They were happy, until she came.

“Why roses you ask? Remember when you first asked me out? You gave me a rose. I was really happy.”

He he! Traditional Halloween IwaOi! Every year I draw this au, so now here comes something hot! 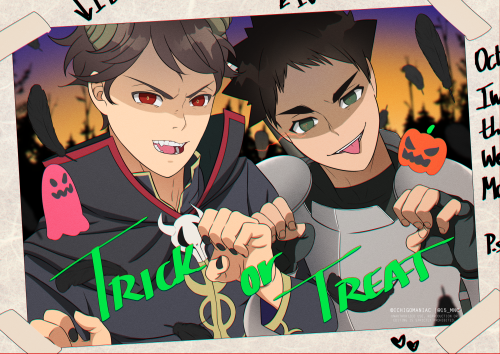 Okay!!!!! I did it,,,my first official fic,,,,,this is more so the introduction in a way? But !!! It’s still here!!! And I’m kinda proud ?? But if you guys wanna see anything in particular, let me know!!! Or constructive criticism, really I don’t mind LMAO this is my first time writing from iwaizumi’s POV, so please…Have mercy,,,,,,,,,😔✌️

I DID….THE FIRST CHAPTER……OF THAT SHERLOCK HOLMES IWAOI THING………IDK HOW TO FEEL ABOUT IT BUT IT’S A ROUGH DRAFT OF COURSE AND DEFINITELY HASN’T BEEN EDITED BUT I’M KINDA PROUD? NOT REALLY BUT IT’S FINISHED??? SO WHAT IF I POSTED IT?????

Start from the beginning

Rating: Teen and Up Audiences 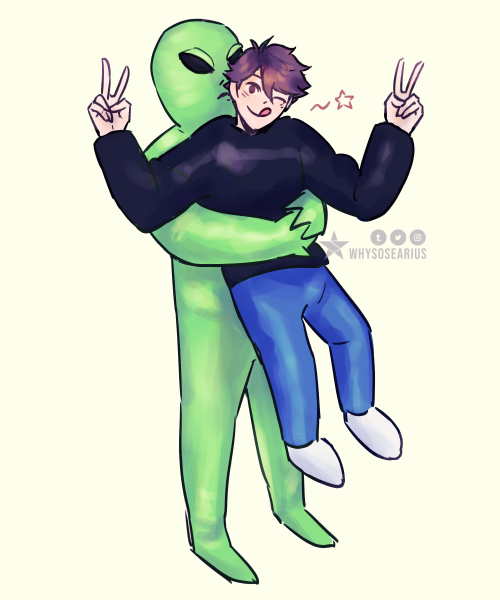 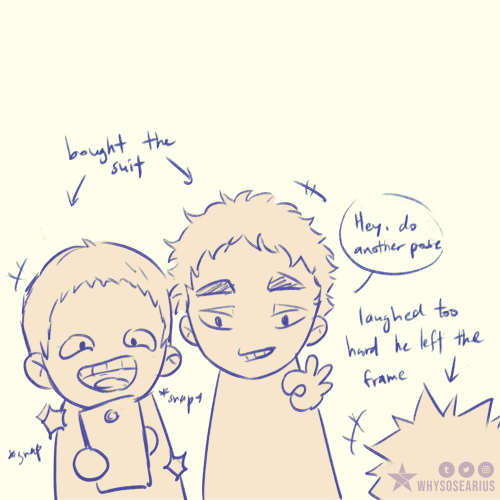 my entire theory that iwaizumi is bisexual can just be boiled down to an image of his denim jacket/hoodie combo at the karasuno vs. shiratorizawa game

Literally the best pieces I’ve drawn thus far. I’m so happy with how they came out.

DAY OF THE NAVIGATOR: Lone astronaut Iwaizumi goes into uncharted space alone and is pursued by a monster. (1 Chap posted prior to this fan event, for HQ Horror Week I posted TWO chapters!

Actually started this for Horror Week last year, didn’t finish, I made it way too long, decided it would be multichap and I would just post it whenever I could, irl+other fandoms+COVID happened and I didn’t post Chapter 1 till June of this year. And I spent all of October 30th perfecting another chapter which I ended up splitting in two. Happy Halloween.

Would be cool if I could make a nice, spooky aesthetic post to go with this but I’ve never done one and don’t care THAT much so. Eh.

ACTUAL summary: Astronaut Iwaizumi is forced to leave the crumbling Earth in a shuttle alone, hoping that the passenger-laden Travelers were able to leave first to escape the invaders and the planet’s end. He flies in uncharted space to nowhere, for nothing.

There are no Travelers out here. Only himself and his endurance against the infinite dark. And a pack of humanoid creatures that follow him. They and their smiling leader, never rebuffed by his defenses and weapons for long, endlessly circle the ship. The leader - brown-haired, brown-eyed, perhaps indestructible - watches him with awe and hunger. It salivates. Iwaizumi stares endlessly back.

#Hqhorrorweek, #IwaOi, #Horror, #Haikyuu, #OiIwa, #Horror and characters being hunted and a weirdass ;;romance;; is a taste I like, #I have to be gone for 1-2 hours to do a family related errand but when I get back GOD I'm gonna keep writing writing writing!, #EDIT I FINISHED!
4 notes · See All
pamayapayaText

There’s only five ships I actually like, and out of those only two that I really go hard for

5. Tsukkishima/Yamaguchi/Yachi, don’t @ me they’re all cute

4. Tanaka and Kiyoko, idk the heterosexual 13 year old in me just jumped out, okay??

3. Iwaoi, I do ship it bc it’s funny but I kinda forget about it all the time ngl

2. Asanoya, the first ship I really loved in the whole show, they’re in Egypt on their honeymoon rn and I WILL fight you on that

1. BokuAka, I don’t even see any reason for me to justify it, we ALL know that they’re married

The third and final installment of what could have been one long fic but i was impatient and posted them separately.. Read “What’s the Word?” first and “Time” second.

“Sorry,” Iwaizumi says, sitting back. “It’s four-thirty. You should probably shower and head back to your room.”

Disclaimer: I am not a professional and my reviews will be honest.

Hello :) I just really love reading fanfiction and I think it’ll be fun to read over some stories and just talk about them. I want to form a Rec List to help readers find authors that I think they’ll enjoy reading from :)

Note: I will only review them if the author asks me/allows me too. I don’t want to give unsolicited advice. The reviews will be on Tumblr and I’ll link to the story. I’ll also leave a comment on the original piece about what I liked. Reviews will have a spoiler-free section and a spoiler section.

Here are things I won’t read (this list is ongoing):

Here are some fandoms I’m in as well as some ships I follow (I also read fanfiction from books):

*I put an asterisk because I’m actively in that fandom at the moment.

my favorite iwaoi trope is iwaizumi going “wow he’s really pretty…” when first meeting oikawa and then as soon as he starts talking he changes his mind like: