So I smash through the window, feet first. There’s glass everywhere, And I say, “Hey, there, sorry for dropping in.”

There’s a chink in the old stained glass window in the building across the street.

Jake’s made a habit of staring at it whenever he’s perched in the windowsill in their living room - a perch he’s found himself visiting more and more often over the last few weeks, a perch he only discovered a mere eight months ago after living in this apartment for more than 2 years.  There’s nothing particularly special about it - nothing particularly comfortable, either, if he’s being honest - but he’s had this image in his head for more years than he’d care to confess, of his wife, untamed hair up in a half-hearted way that screams more utility than style, nose buried in a book, framed in a window seat against a sky speckled with brilliant hues of blue and orange and pink.

(Since she was nothing more than a colleague, he’s had this mental image, born after a very long night that ended with him driving the two of them back to the precinct from a scene across town; she’d pulled a book from her work bag in his back seat and read the whole way back, the atmosphere soft and comfortable despite the silence, and when he’d glanced at her from the driver’s seat her silhouette was set against the just-peaking rays of the morning sunrise.)

He’s had this image, but her apartment let him down, because she doesn’t have a window seat full of overstuffed pillows and luxurious throw blankets like he’d imagined; she has a thin wooden windowsill, off-white paint chipped on one corner after a day of shifting furniture, and it’s hardly wide enough to even count as a perch because he’s found that if he stays there any longer than five minutes his butt starts to go numb.

#my b99 fics, #brooklyn 99, #jake peralta, #amy santiago, #jake x amy, #baby fic, #look i'm not really looking to get into discourse, #this is just. an idea., #really really really not looking for discourse - show-related or otherwise, #based on a conversation my cousin had with his wife after their first baby was born, #anyways
78 notes · See All
rosalitadiazzPhoto

That Rosa is the funniest aunt Roro Mac could ever have, she picks him up from parties and everything (when he’s drunk), she buys him pizza when he’s feeling down, he goes to her for advice and she even teaches him how to ride her motorcycle.

Why by Sabrina Carpenter X Peraltiago

Being a Brooklyn99 fan means singing along to I Want It That Way but not the original version but the one with Jake and the perps singing it, including all the dialogue.

I really miss seeing them working on cases and other things together.

does anyone know any immigrant owned clothing brands/ brands donating proceeds to immigration efforts that i could buy an abolish ice shirt from?

Jake *looking at her seductively*: How about we take things to the bedroom?

Amy : Are you trying to seduce me into sleeping?

Jake: …Is it working?

you are in love, true love…

one of my first attempts at digital drawing, inspired by this amazing fic: you can hear it in the silence by @elsaclack 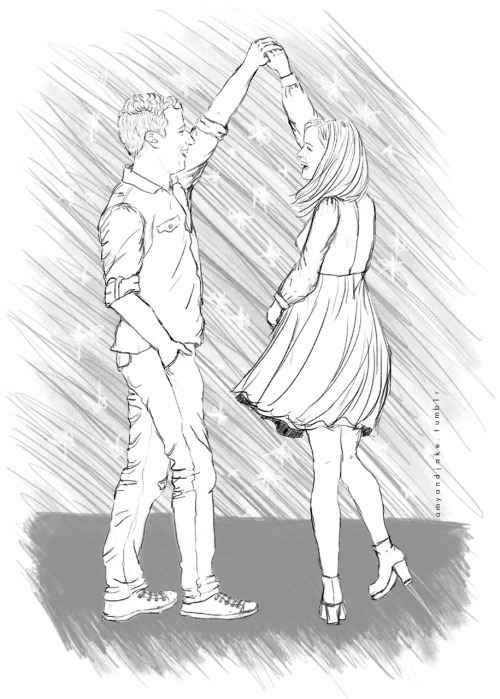 #peraltiago, #jake x amy, #b99, #b99edit, #b99 fanart, #brooklyn 99, #brooklyn nine nine, #usermacperalta, #every time I read this fic the image of jake and amy dancing is so clear in my head, #so I had to draw it, #this is the first time I post any of my drawings on here, #so hope you like it
214 notes · See All
peraltiagostylesPhoto

Oh boy, little did he know.

So I finally put up part 2 of my Anastasia au, I hope you like it!

Jake doesn’t push too hard when they get home. Whatever she’s remembered, it’s clear from the moment she enters the spare room that she doesn’t feel ready to delve too far into it, at least for the time being.

Luckily knows her well enough at this point to know exactly how to lift her mood, even a little. And with a combination of Polish food, Property Brothers and a fresh newspaper with a crossword just waiting to be completed inside, she warms up just the tiniest bit. Then, she takes a deep breath and begins to speak.

“They were executed. My family, I mean.”

“Ames…”, he stops her, not wanting her to go deep into the events if it’s just going to upset her.

“No, no it’s ok. I just wish I could remember their faces, who they were, not just…”

With that, he opens his arms, she dives in and they both fall asleep to the sound of the channel that neither of them were really watching anyway.

Later that night, a sudden noise from outside stirs Jake from his sleep. He looks down and sees that Amy is still fast asleep and decides not to wake her: after what she’s been through, she needs to sleep. But as an ever energetic ball of energy, he finds it hard to rest, so he turns on the captions of the documentary that seems to now be playing on tv whilst also silently playing on his phone.

He doesn’t pay much attention, until something entirely unexpected catches his eye: amongst others, Amy’s face is on the screen, dressed in fine clothes, along with what looks like the rest of her family. Still trying to not wake her, he carefully pushes the remote and gasps when he sees the name of the programme currently playing: “St. Iago’s Lost Royal Family”.

He doesn’t tell her right away the next morning, twisting the words around in his mind, trying to find the way to tell her what he saw, especially given what she’d been through the day before.

Both Jake and Amy have a shared day off and they spend the morning quietly, Amy filling out her crossword while Jake plays Candy Crush. After they’ve had lunch, he sits her down on the couch and gently tells her that, after they both fell asleep last night, he woke up and saw something on tv that she needs to see. She looks apprehensive as he turns it on and when she sees herself on the screen, she has the same look of shock that she had when she ran away in the jewellery shop.

The next few hours all blur into a mess of Amy spinning the music box in her hand whilst Jake continually hovers to check that she’s ok, his protective instinct taking over as they limply attempt make painfully stilted conversation.

“So my real name is Anna huh?”

“Yeah I guess so”

“So… what do we do now?”, Amy asks after a pause that seems to last forever.

“That’s up to you”, Jake gently responds. “That documentary said that your grandmother is still alive – do you want to try and find her?”

“Yes” Amy answers firmly. “I know it sounds so corny, but I feel like I need to fit these pieces of my life together.”

“Hey you just had life altering news, you’re allowed to be corny”, he says, going to kiss her forehead.

“How did I get so lucky?” she responds softly, holding him close.

It’s not until they’re almost at the end of thief train journey that he seriously considers the possibility that he’s going to lose her. Neither of them know for certain what the future will hold, but he can imagine that if she chooses to stay with her grandmother that, as painful as it may be, they may have to go their separate ways.

But then he looks down, to her head resting on his shoulder and he knows that as long as she finds where she belongs, that’s all that matters to him.