(Tell me if I got this wrong)

Hey everyone! I’m back after a week of disappearing with another oneshot for my eye color au. This one takes place some time after the last one shot, which will be linked. This takes place in my au where the sides have eyes that change color to reflect their mood, and Logan has been wearing contacts to hide their depression. I’d recommend reading the general headcanons, eye color key, and the last oneshot if you don’t want to be too confused.

This is my second oneshot for this au, and I’m still a little hesitant about posting it, as this is only my second thing I’ve written that hasn’t been for school.

TW: depression, lack of self-care, overworking oneself, self-deprecating thoughts, burnout. [Let me know if you want me to tag anything else]

Oneshot under the cut, I hope you enjoy it!

A/N: It’s December again! This December, I’m gonna be using THIS PROMPT LIST by @huffletrax! Like last year, I’ll be putting up one story a day, and these will all be cross-posted to my Ao3 account in a collection for easier navigation. Here on Tumblr, they’ll all be tagged #Holidays2020 and each prompt will be tagged with the day the prompt corresponds to, so today will be #Day01, tomorrow #Day02, and so on through the month.

This year, I’m planning on centering the stories around the Sanders Sides, rather than the Markiplier/JSE Egos, since I’ve been basically hyper-fixated on Sanders Sides for the last several months.

Without further delay, here’s the first fill for the month!

@coconut-cluster hope you enjoy it!!!

“Of course I know, you make it very clear.”

“Can we just get this over with, please?”

“Of course, mon cheri.” Janus’ words were sarcastic, but his eyes showed a bit of hurt in them.

Logan hadn’t meant to be rude— dealing with Janus was always… complicated. It was hard to tell what had been ignored, and what had really gotten through to him.

He brushed away his thoughts, and adjusted his glasses.

“Well, then. Should we get started?”

“I suppose so.” Janus ran a hand through his hair, and Logan’s voice caught.

He shook away the feeling, clearing his throat.

“How would we go about, ah…. learning how to dance?” He asked, starting to realize how little he knew about all of this. He wasn’t sure Janus knew much better— why was he doing this, again?

“Just— follow my lead, will you, Oliveira? We’ll start with a waltz— it’s the easiest to learn.”

There were a few seconds of awkward touching and eye contact, while Janus tried to show Logan how to position his hands for the dance.

Soon enough, one of Logan’s hands was on his dance partner’s shoulder, and the other being held in Janus’ own.

He was barely touching him, but Logan felt like he was on fire. When had it gotten so warm in there? Maybe they should open a window?

Janus’ eyes found his, and a small smirk graced his lips. “Cat got your tongue, Oliveira?”

“it doesn’t matter— let’s just… get this over with.”

Janus started to step backwards, and Logan followed his lead, careful to not step on his toes.

At first it was complicated, but Logan thought that he was starting to get an idea on how to do it. It was simple, really. Just rhythm, and a bit of   coordination—

He accidentally trod on Janus’ toes, and muttered an apology.

Maybe it was more like a lot of coordination.

They slowly moved around the empty room, and Logan tried to ignore how small the space between them was.

Janus had ceased counting, but Logan was still hearing it, like an echo in his head.

Their footsteps were the only sound now— and Logan realized that they had forgotten to put on some kind of music to dance to. All for the better, maybe— he might be able to stay longer, if Janus got distracted enough to forget about the time.
Although he would never admit it out loud, he was actually enjoying this lesson.

Suddenly, Janus stopped moving, and Logan tripped, nearly falling onto him. He managed to catch himself at the last second, but it still left him in a compromising position— his hands on Janus’ chest, and Janus had flung his arms around his shoulders for balance.
He could hear Janus’ heart beating, much faster than he’d think dancing would cause. And he was sure if he were to listen to his own, it would almost match. His breathing hitched, as he stared into those eyes.

They stood like that for no longer than a few seconds before Janus smiled, that obnoxious, arrogant smirk that Logan could absolutely NOT stand, and Logan pushed him away. He pretended not to see how Janus’ grin faltered, how he brushed himself off and looked away.

“I apologize, Janus. I don’t know why I did that. Are you hurt?”

Janus looked up, feigning the same smirk as before. Logan could tell it was fake by the way his eyes looked— there was no smug sparkle to be seen.

A few more moments, and then—

“I’m sorry for dragging you here— you looked like you hated every second of the dancing, and I don’t know why I made you do it in the first place.”

Logan met his eyes, and a soft, genuine smile tugged at his lips.

“Actually, I… quite enjoyed the waltzing. Perhaps we could do this again?”

Janus opened his mouth to speak, and Logan backtracked, careful not to let him get the wrong idea.

“It’s not like I like you, I just think that dancing requires a lot of skill, and I would like to see if I could learn more, and—”

Janus cut him off by stepping forward and adjusting his tie— a very effective way to shut Logan up, because he suddenly found himself unable to form a simple sentence. Janus began to speak again as he fixed ir.

“Of course, I wouldn’t dare think that you could actually tolerate me.” Janus rolled his eyes, but there was a hint of sadness in the way that he said those words. He stepped back, giving Logan a once-over, before nodding and turning to leave.

Logan felt like he should say something, but he didn’t know what.

“I’ll see you next time, Oliveira.”

Let’s play a game called “how many em-dashes can Ari put into one drabble? The answer is— A LOT.

This was extremely fun to write and I hope that people actually like it!!!!

“You look like you’re having a difficult day, my prince,” Janus said, coming up behind Thomas and slowly wrapping his arms around his neck.

Thomas groaned, tipping his head back and burying his face in his palms.

“Please don’t call me that, I’ve had enough of being a prince for the day.”

He sat down close beside Thomas, just as Janus did the same thing at the prince’s other side. They exchanged an amused look as Thomas finally took his hands from his face.

“I am this close to just quitting and letting Roman or Remus be next in line. It sounds so much simpler.”

“Darling,” Janus said. “I think you would regret giving it up, even if it can be stressful.”

“Is there anything we can do to help?” Nico offered.

Thomas sighed, before smiling - a mix of tiredness, appreciation and a small bit of teasing mischief.

And, of course, that was exactly what Thomas got.

Roman *to Virgil*: Kiss, Marry, Kill: Logan, me, and Patton?

Janus *from the next room*: What the hell?! I wasn’t even an option! 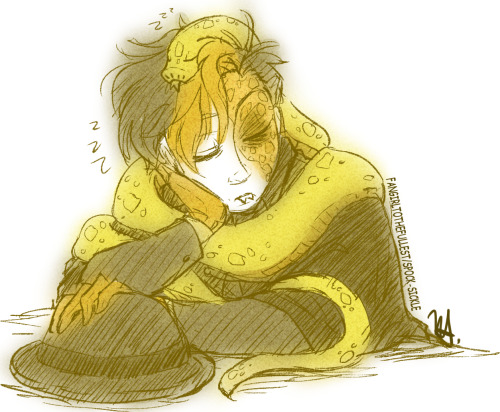 Remus: Are you okay?

Aww, you made him happy ^u^

Imagine if Janus cuddles with his scales pressed to the warmth

Janus: Wait, you’d take a bullet for me?

Remus: I would do anything for you, darling.

Remus: Except eat cucumber, those things are fucking nasty.

Logan: If I go outside and all our mugs are on the front lawn, I’m going to kill you.

Janus: *sips tea from a bowl*