The hilarious #JASONSUDEIKIS is joining Ellen in the studio to talk about the “Saturday Night Live” alum will chat about his new Apple TV+ series, “Ted Lasso,” which is getting rave reviews!

Then, Ellen will sit down with the newly crowned winner of “America’s Got Talent,” poet #BRANDONLEAKE , to talk about what it was like getting the coveted Golden Buzzer in an early round of the competition, and how it felt to perform poignant pieces about Black Lives Matter, his newborn daughter, family grief, and more.

Then, you’ve probably seen this hungry 2-year-old in a video making its way around the internet… #CadeHagedorn and his grandmother #CindyHunt are in the studio with #Ellen ! The video of Cade grabbing and tasting every ingredient – including raw butter, flour, and eggs – has gone viral, and Ellen will make an attempt at baking with #CadeandCindy

Next week on @theellenshow 📺

Alright, so ignore that title for a second. This is a movie with a ton of funny charismatic folks in it. Jason Sudeikis, Tyler Labine, Lake Bell, Lindsey Sloane, Nick Kroll, Will Forte, Leslie Bibb, Martin Starr, and others. Don Johnson even has a minor role (or a cameo; suppose it depends if he comes back?). On the strength of this cast alone, this movie should do no less than a B-.

And yet… I dunno, it just never quite gets better than mediocre…?

Let’s break it down, as there’s a lot of moving parts here. We focus on a group of friends and it’s a larger-than-usual cast. Each of them has their own storyline, which actually works. The dialogue and interactions are all great and really make this contrived/silly setup work. I’m not really a Nick Kroll fan, but he works pretty well here in a “less is more” capacity. So like in that respect, things are rolling great. Like uh… Lindsey Sloane’s character lost a bunch of weight, but is still really anxious about being seen naked. Sue (Michelle Borth) is low-key (but still statedly) pining after Eric (Sudeikis) and has been for some time apparently. Duquez (”du-kezz”; Starr) is racked with anxiety over his rock record (but also is the friend that they all crap on)/that takes the razzing personally). Eric (again, Sudeikis) is trying to save his party house and dating one of the realtors hired to sell said house (Bibb). It’s very much an ensemble piece and actually works really well.

Oh, it’s game time. Yes, writing this as the movie is still going. See, there’s a big hangup I have here. The movie opens with our cast at their various places of work/normal life, and then heading to party #1 (the White Trash Bash). Apparently this is a regular thing: our cast party at a vacation house, and have been doing this on & off for years. Eric’s dad (Don Johnson) is selling the house though, and Eric n co want one last blowout. And what is that finale? Peep the title of the movie, kids.

So, from jump street, I find it weird that friends would all sign on for this horrendous idea. Like I’m awkward as fuck, but I just can’t conceive of friends banging it out and then all still being chill about it.

But my big objection/hangup is that they’re all 30ish. Like… this is a 20something plot. This is the premise of one of those post ‘American Pie’ movies that is just an excuse for a fuckton of female nudity. Them being in their 30s - and Kroll’s character explicitly states “they took my 20s; they will not take my 30s” - makes it… I dunno, kinda weird. Like there’s some level of immaturity here that isn’t addressed in any meaningful way (which it probably should be). I dunno. There’s something about it that rings… strange for me. Like I said though, friends banging it out like it’s nothing also rings “odd” to me. Maybe a night of swinging is something friends without kids do? I dunno. All our couples friends have kids. It’s weird.

I dunno. Uh, 7/10. The dialogue is enjoyable and the people are charismatic, but it’s just not on that next level like I was hoping it would be. Available now on Hulu

Tomorrow on @theellenshow 📺
.
#JASONSUDEIKIS is guest hosting for a second time, and this time with a new look!
.
First, the beautiful #OLIVIAWILDE ,to talk about her film “Booksmart” and how much it means to her to have directed for the first time!
.
Then, the talented and incredible #JOHNMAYER , to play “Ellen’s Burning Questions”!
.
.
#ellen #ellendegeneres #theellenshow
https://www.instagram.com/p/BylsFl5hM-A/?igshid=1rtgobwabx1wv

Tomorrow on @theellenshow 📺
.
Ellen’s great friend #TIGNOTARO , to catch up with Ellen and talk about her family, parenthood, and the movie “Instant Family,”
.
Then, Ellen and #OLIVIAWILDE will be giving #JASONSUDEIKIS a haircut! How will Jason feel about this? You’re going to have to watch!
.
Plus, Ellen welcomes back #ROBLOWE! To give Ellen and her audience a look at his new FOX show, “Mental Samurai”! when he stops by!
.
that he’s the host of the The competition series puts its contestants’ smarts to the test in unbelievable challenges you’ll have to see to believe! Rob will
.
Also, the next Bachelorette #HANNAHB ,
to tell Ellen how ready she is for the upcoming season! She’ll chat about the results of “The Bachelor,” her journey on the show, and how excited she is to find love!

These two are ready for a hometown date.. 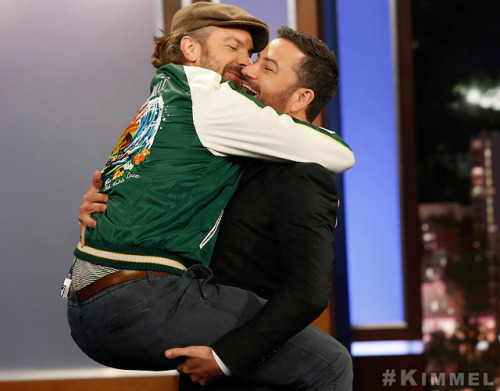 The new trailer for Downsizing is amazing, we cannot wait for it to be released

#Repost @sheiscolossal
・・・
“Look what had to happen for things to get interesting around here."⠀
⠀
Anne Hathaway and Jason Sudeikis star in director Nacho Vigalondo’s COLOSSAL, opening 4/7 in New York and Los Angeles, with many, many more cities to follow. Get your advance tickets at sheiscolossal.com. #SheIsCOLOSSAL #annehathaway #jasonsudeikis