nhs is baby but also I remained convinced that given half a chance, he can be daddy :3c

technically drawn for this fic 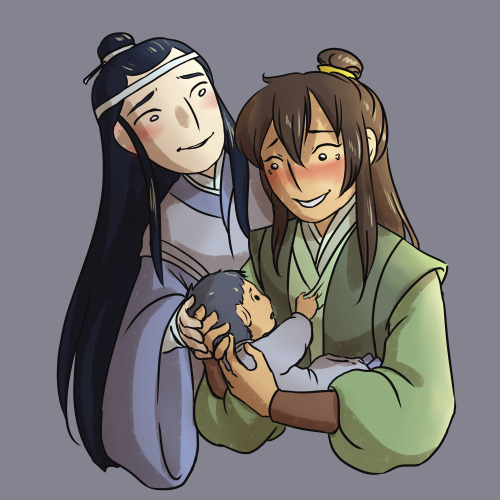 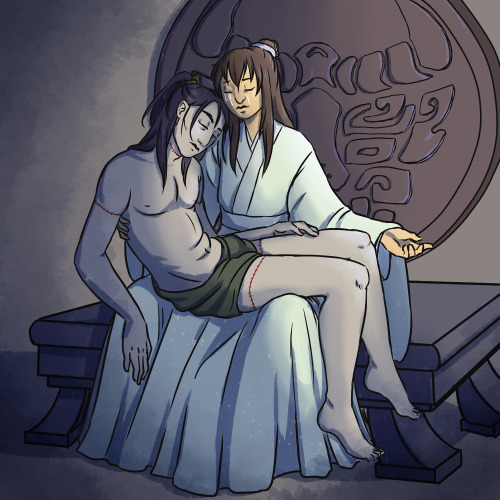 #nie huaisang, #nie mingjue, #will I ever stop drawing nhs craddling his dead brother's body (or parts of it)?, #signs point to fuck no, #mdzs, #jau draws, #should I have put actual effort in the background? yes but I'm very lazy
75 notes · See All
ibijauPhoto

Sunday 11th: Free spot - Age/role reversal, where Nie Huaisang is the oldest with a bratty little brother, while Lan Xichen is the sweet and happy Second Jade of Gusu Lan

“I leave my brother in your capable hands,” he said, before turning to Lan Wangji and bowing again. “Please, make sure he doesn’t create troubles. I trust your judgement in these matters, so punish him if need be."

Next to him Nie Mingjue scoffed, as only a boy unused to discipline could. Nie Huaisang, who was the entire reason his brother often came off as a stubborn brat, sighed. The Lans would have a lot of work with that one.

Lan Xichen, who had been standing behind his brother, stepped aside to grab Nie Mingjue’s arm, smiling brightly.

"I’ll make sure he behaves,” he promised. “If he does anything bad, I’ll tell Brother and Uncle."

"Xichen-ge!” Nie Mingjue cried out, betrayed. “I thought we were friends!"

"I trust you most of all,” Nie Huaisang said, amused as always by this too earnest second master of Gusu Lan. He almost laughed when Lan Xichen’s face turned bright pink at his comment. It was always fun to compliment those Lans. “Lan Er-gongzi, please take good care of my little brother. I know you will be a good influence on him."

Lan Xichen preened, until Nie Mingjue elbowed him in the ribs for this betrayal. This time, Nie Huaisang really couldn’t help laughing. He exchanged a glance with Lan Wangji who also looked amused, in his own manner, while Lan Qiren just sighed and dismissed the two boys so grown-ups could speak in peace. Well, two grown-ups and Lan Wangji, who wasn’t quite nineteen yet, but often behaved as if he were already in his seventies or more.

"How are things in Qinghe?” Lan Qiren asked, inviting his guest to sit while Lan Wangji served tea for both of them.

“Better these days,” Nie Huaisang confessed. “We haven’t had another plot against us since that last time. I think everyone is coming to term with me being in charge until Mingjue comes of age… And five more years isn’t so much to wait." 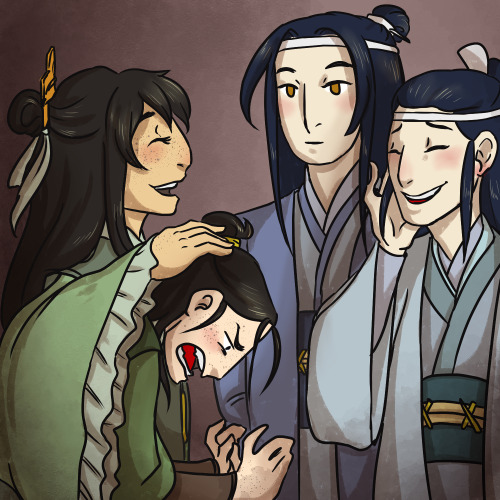 “How much further?” Lan Xichen asked, increasingly curious about their destination.

They had left the town behind them a while ago now, yet Nie Huaisang showed no signs of wanting to stop. Lan Xichen didn’t mind as such, happy to follow his lover and carry everything the other man had thrown in his arms, but it really was getting a little odd. Nie Huaisang wasn’t someone who usually enjoyed the wilderness, not unless he was bird watching, and in the dark of night that simply wasn’t an option.

“Not much, we’re almost there,” Nie Huaisang replied, looking back behind them, as he had down several time already. “Actually, you stop here a moment, I’ll look around for the right spot.”

Lan Xichen smiled, amused by his lover’s taste for mysteries and perfectly happy to indulge it. As far as things went, a surprise in the hills on the night of a festival was not, and by far, the worst thing Nie Huaisang had ever schemed for. So Lan Xichen smiled to himself as Nie Huaisang went back and forth on the side of that grassy hill, until he finally found a place that appeared to satisfy him and called for Lan Xichen to join him.

“Give me the box now,” Nie Huaisang ordered with a grin.

Lan Xichen obeyed and watched as his lover took out a blanket which he spread onto the grass, as well as a smaller box decorated in a pretty manner which he carefully put on the blanket. He then sat down elegantly, and gestured for the empty space next to him. 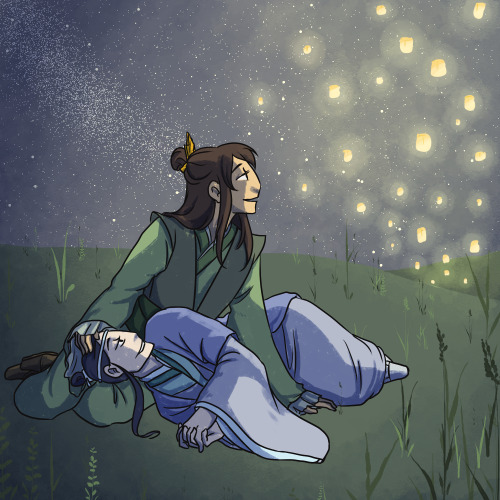 #xisang, #xisangweek2020, #nie huaisang, #lan xichen, #mdzs, #not that it's very important but this would be post canon, #also partner said they both look high and I can't unsee it now XD, #jau draws, #jau writes, #I so badly wanted to also do the role swap theme so I'm using it tomorrow... kinda
36 notes · See All
ibijauPhoto

Not much to say. Those men are both hiding from the world, and sometimes also from each others… but I have to believe that eventually, they learn to really see each other :) 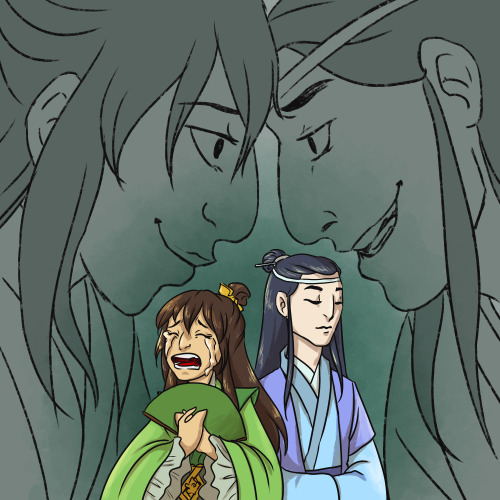 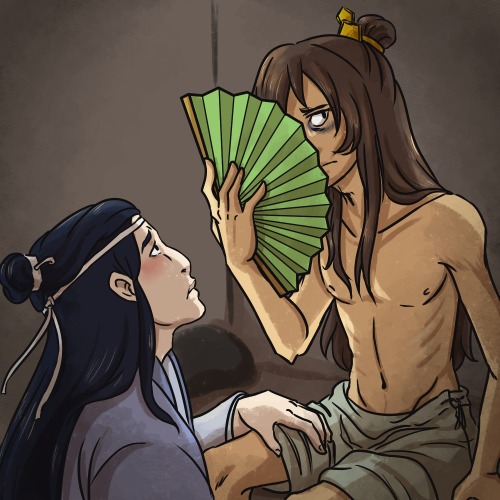 #xisangweek2020, #xisang, #nie huaisang, #lan xichen, #mdzs, #jau draws, #jau writes, #curses totally count as a type of illness because I say so, #aaah I remember being young and innocent and thinking I'd write just one or two fics for this ship and be done with it
25 notes · See All
ibijauPhoto

Lan Xichen, lowering himself inside the bathtub, sighed at the nearly painful warmth. Even with his high cultivation, this sudden blizzard had been a little much to handle. He couldn’t quite regret his decision to push toward the Unclean Realm in spite of the weather and the late hour, though. Not when it meant that Nie Huaisang was now fussing over him like this, scolding him for being unreasonable but stoking the fire so Lan Xichen wouldn’t get unwell, helping him wash and dry his hair, bringing him a towel that had been warmed near the hearth…

It was rare for Lan Xichen to be on the receiving end of so much care outside of whatever moments of privacy they could steal, but he enjoyed it very much. Nie Huaisang could grumble all he wanted, his every action felt like an encouragement to misbehave again, just to be tended to like this.

“I’ve laid some clothes for you on the bed,” Nie Huaisang announced when Lan Xichen had been dried from his bath. “They’re probably going to be a little short because they’re mine, but they should be warm enough, and at this hour it’d be a bother to look for something more your size. Did I mention how unreasonable you’ve been?”

“Several times,” Lan Xichen replied, smiling to himself as he walked to the bed and started dressing up. 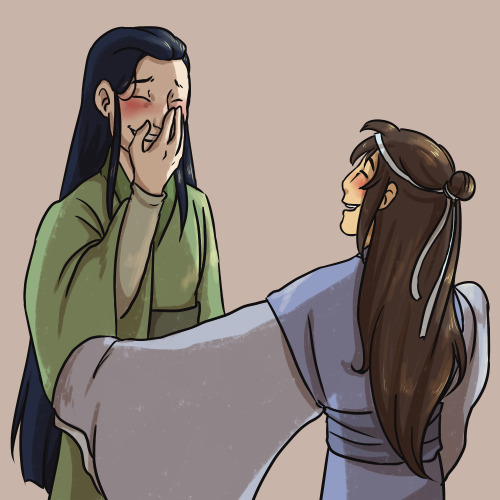 Lan Xichen stopped the flow of healing energy into Nie Huaisang’s shoulder, who gingerly tried moving his arm and winced. It still hurt, even after being healed, even through the slight haze of drugs.

“Don’t move,” Lan Xichen scolded him. “I’ve just gotten it to stop bleeding. It’s… you’ll need stitches. I’ll get you a proper healer for that, as soon as they’re done with…”

With the people who were less lucky than Nie Huaisang. The one who were cut open, the ones whose cries of agony drew Nie Huaisang to the scene of the disasters.

The ones who died.

Nie Mingjue had always been too powerful for even fellow cultivators to fight against, and so these people, many of them servants, a few juniors from other sects passing by, how could they…

Nie Huaisang shivered. It would be a mess to make apologies and give blood money to all these people’s families.

It would be a mess.

It would be his mess. 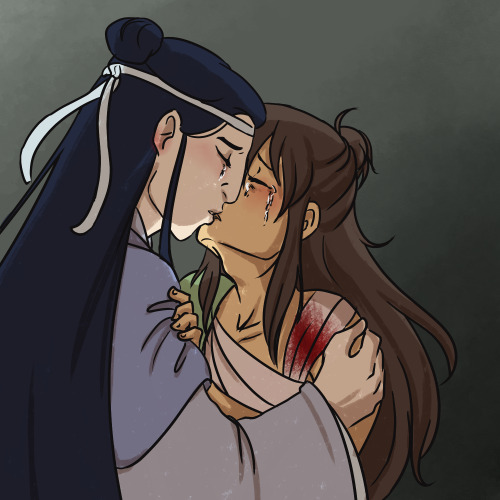 #xisang, #lan xichen, #nie huaisang, #mdzs, #xisangweek2020, #In true Jau fashion I start this with angst because come on, #have you met me??, #Jau draws, #jau writes
56 notes · See All
ibijauPhoto

Y’all, Three Gates by @robininthelabyrinth is both the sweetest and the most terrifying thing I’ve ever read and I’m loving it so damn much TAT

Meng Shi is Nie Huaisang’s mother, leading to Meng Yao entering Qinghe Nie much earlier than he does in canon 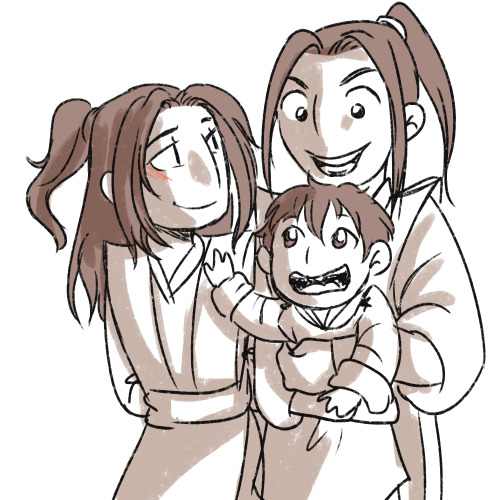 #nieyao, #nie mingjue, #jing guangyao, #meng yao, #nie huaisang, #mdzs, #jau draws, #gods I love this AU an unreasonable amount ahah, #this quick doodle really doesn't do it justice but I was overcome with the need to do something for it RIGHT NOW so here we go
170 notes · See All
ibijauPhoto 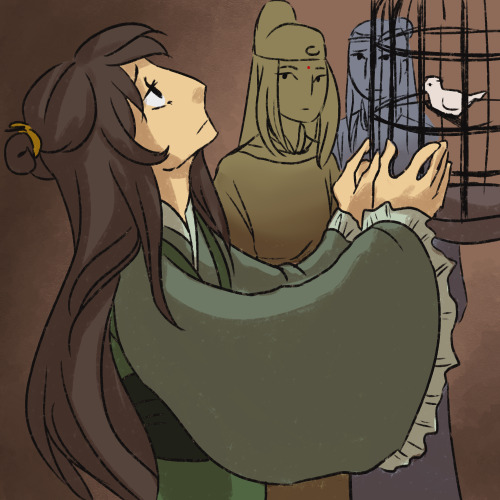 When both you and your best friend have a didi complex and you’ve never minded before, but now said best friend is dating your own actually didi and maybe that’s out of line, Xichen? really? Do you see me dating Wangji? 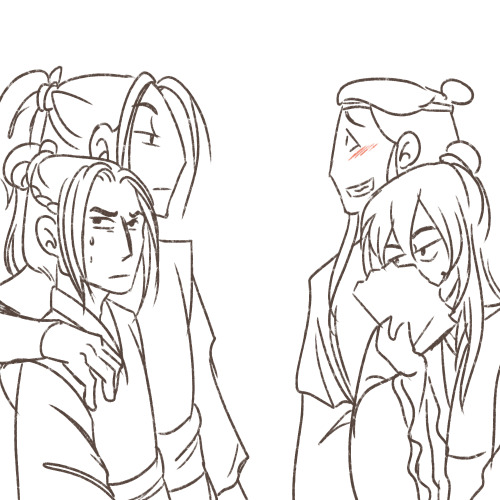 #mingcheng, #xisang, #nie mingjue, #lan xichen, #jiang cheng, #mdzs, #jau draws, #this is very stupid but yeah, #nmj and lxc both have a didi complex but for like a different type of little brother
124 notes · See All
ibijauPhoto

thanks @demonic-cultivar for making me realise just how uncomfortable lxc would be in this latest bit of the demon!nhs au :) 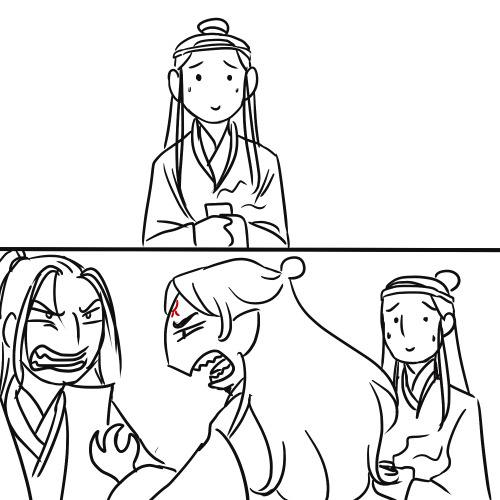 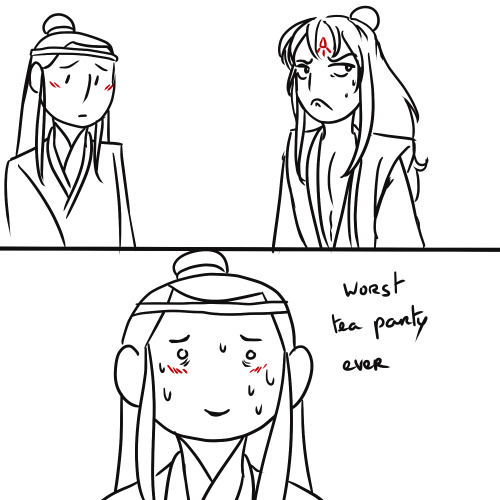 still trying to get that Deathbed Wedding AU out of my mind :) 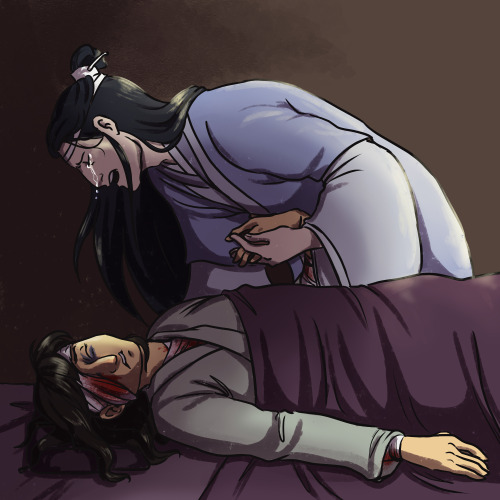 it’s fine if I don’t write this fic, I can still illustrate it right? 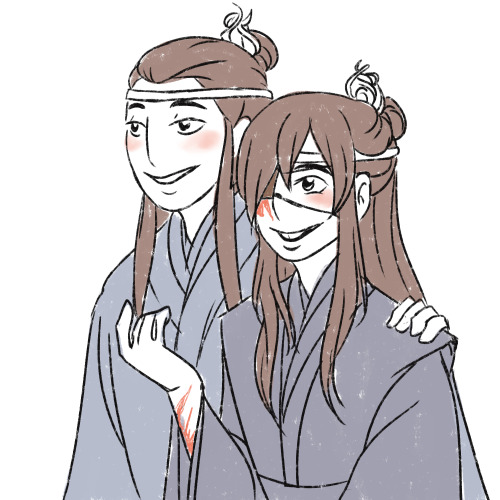 #xisang, #nie huaisang, #lan xichen, #mdzs, #mo dao zu shi, #jau draws, #deathbed wedding au, #big thanks to the xisang discord for putting up with my rambles on this topic yesterday, #I am impossibly attached to this au but I can't see to write it because I suspect it's wildly ooc :)
44 notes · See All
ibijauPhoto 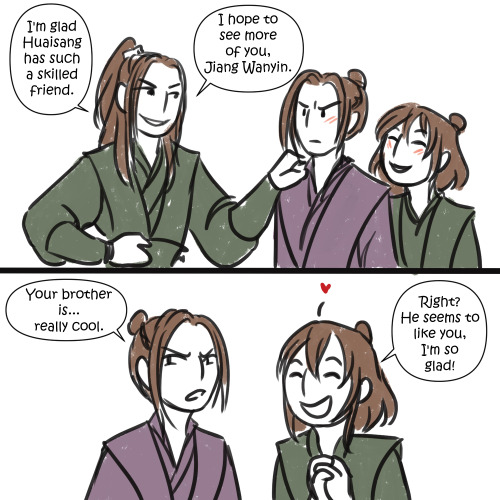 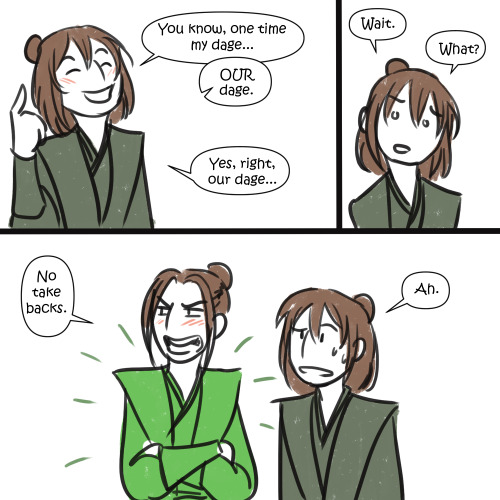 That song is not particularly fitting these characters but it’s still what inspired me so welp :) 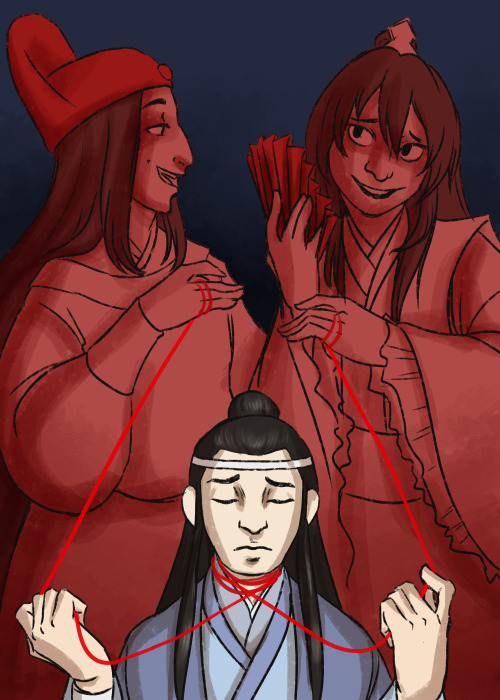 shamelessly ripped from that Cordelia poster, because I fucking can I guess 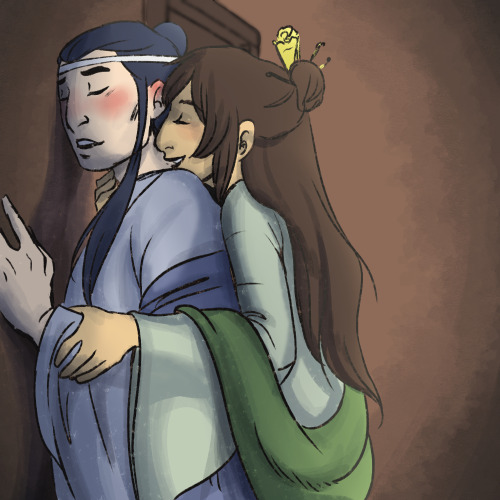 “Please don’t tell Da-Ge,” Nie Huaisang begged, looking up at him with tears in his eyes. “Please, he won’t understand, you know how he gets, he’ll be furious!”

Hearing him speak in such a manner helped Lan Xichen regain his bearings. There was a crisis happening here, and so he had to mediate for it, it was almost an instinct. 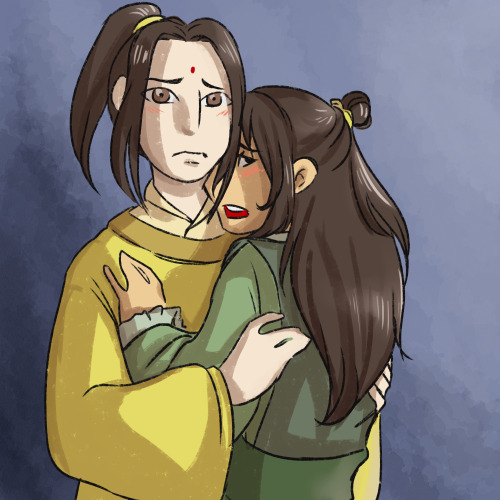