(He’s just gettin’ a lil overwhelmed give him a minute)

Ever since Oliver began working at Freddy’s he began to experience parasomnias such as confused arousals (confusion upon falling asleep and waking up), sleep walking/paralysis, and night terrors. These night terrors are usually from the point of view of one of the missing children and entail their demise, caused by Vincent.

Vincent is the reason for these nightmares, partially— he’s been messing with Oliver’s head. He also appears on the cameras when he knows Mike and Jeremy aren’t watching, showing his face to Oliver so he’ll try and tell the others. Mike and Jeremy don’t believe him and simply think he’s hallucinating due to a lack of sleep, or stress.

But these nightmares are so vivid, and he swears he can see that purple bastard. Oliver’s bound to have a meltdown of some kind sooner or later.

More doodles + a comic I did, mostly Cody related! Cody was a day shift employee killed in an incident known as the bite of ‘87. His ghost doesn’t do much other than cry. Vincent is mean to him !

Refs part two! Dead kids + the victim of the bite of ‘87! Ik he was supposed to only sustain frontal lobe damage but sadly, he is dead. It happens :(

I made an AU based off of rebornica/2015 era fnaf,,,I’m feeling nostalgic and I wanna post my shenanigans ;;

This is the timeline for my AU!!

Fritz: GOOD CREDIT! BAD CREDIT! NO CREDIT?! NO PROBLEM! ARE YOU DEAD?! FUCK IT! GHOST CREDIT!

The guards reacting to you asking for their pronouns. 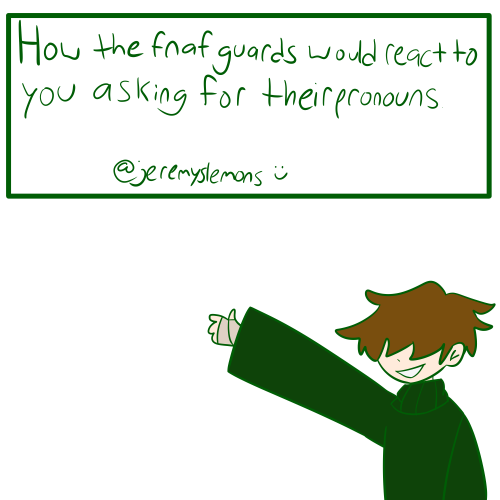 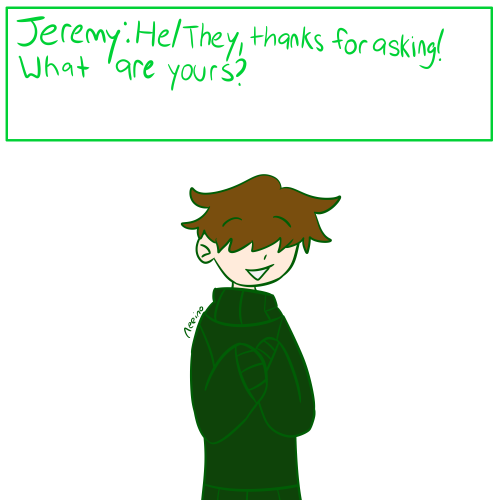 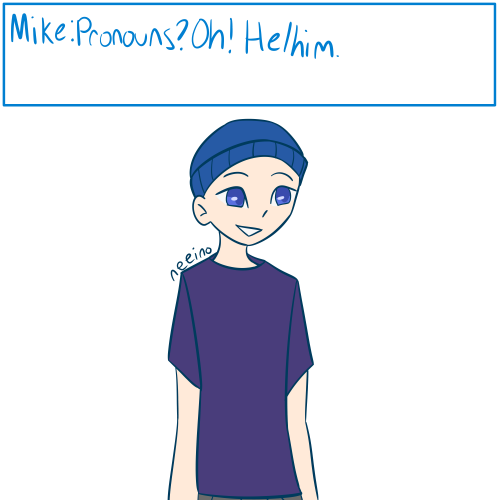 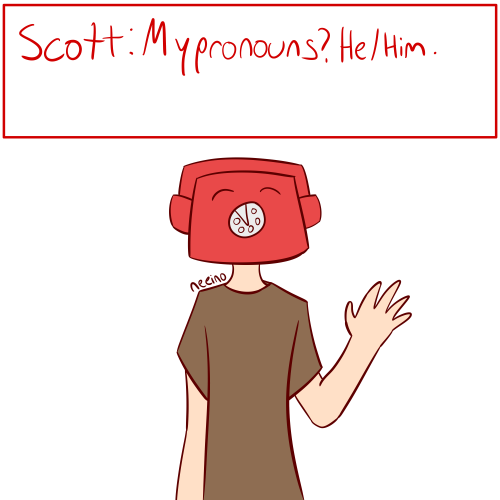 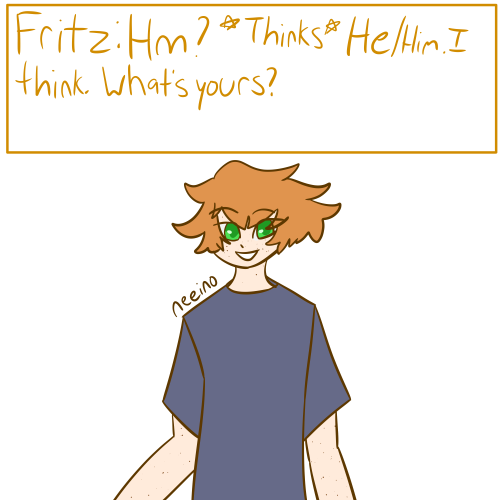 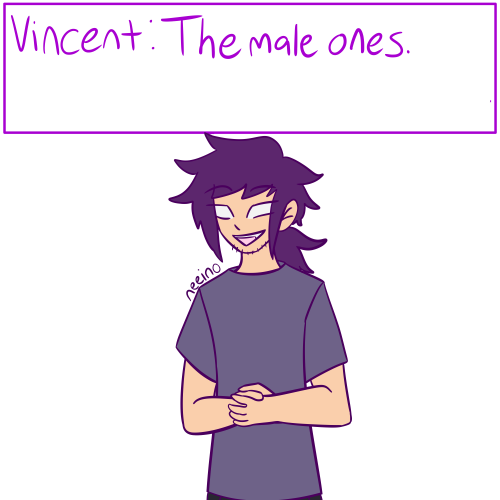 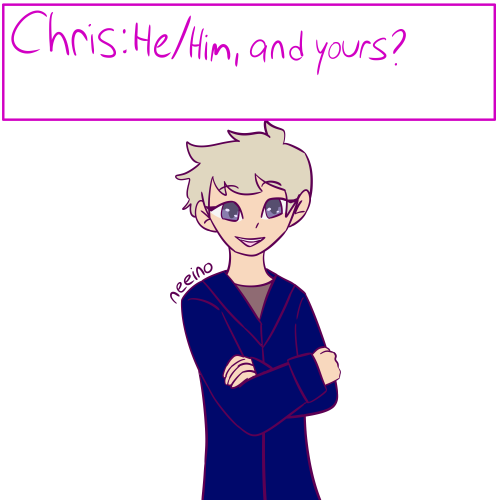 Jeremy is essentially a gremlin on crack. He has a great sense of humor & can get along with anyone (though some may find his enthusiastic personality a bit annoying).

Jeremy’s been good friends with Michael since elementary school. Both of them decided to take a gap year in after graduation to figure out what they wanted to do. Because of this, they both end up employed at Freddy’s.

In his free time, he enjoys playing video games & hanging out with Michael. 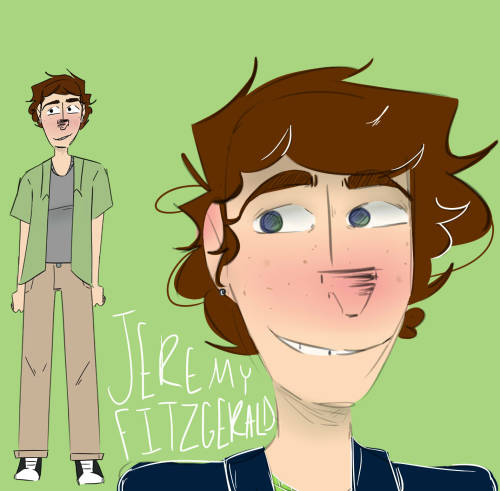 I kinda struggled to get this one done because ✨mental health✨ but now I only have one left aaaa- This time presenting Scott, who ended up turning kinda cute ngl

“And mine is infested with bugs”

This is actually a duo drawing, the other one is with Jeremy but I haven’t gotten around to finishing it yet

shadow bonnie was following jeremy home after he left work. 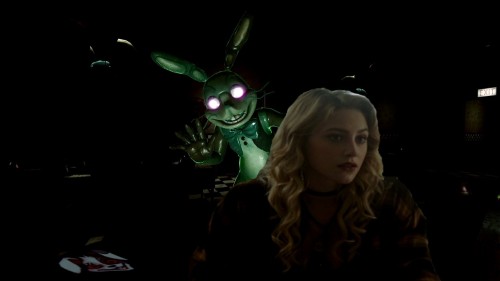 brightly colored but terrifying man and his bubbly punk boyfriend 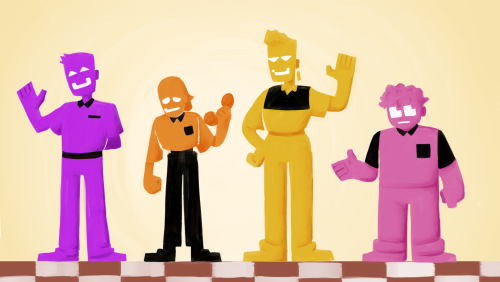 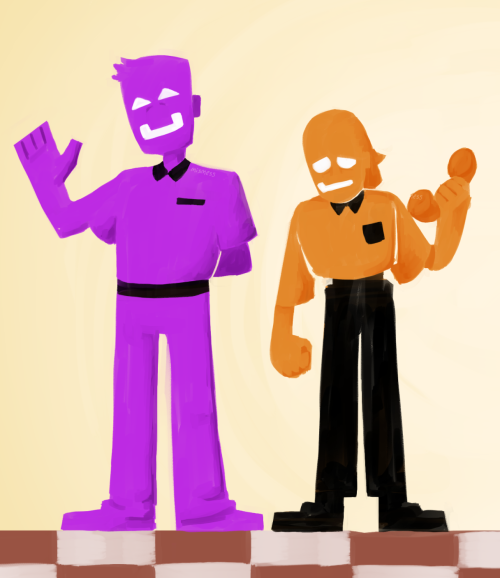 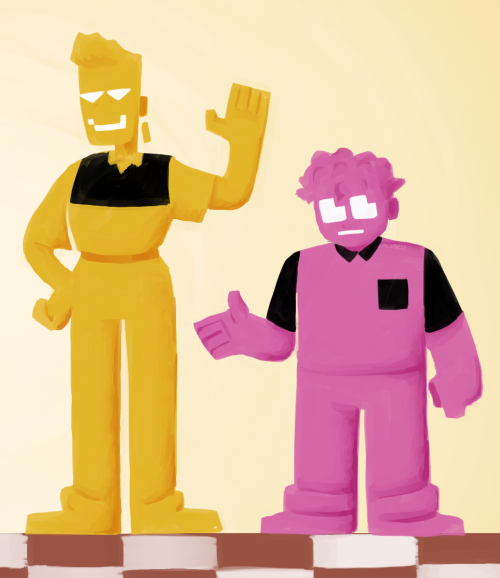 #five nights at freddy's#William Afton#Phone Guy#fritz smith#jeremy fitzgerald#fnaf#fnaf 2#art#lekko's art#Scotty Guy
113 notes
rabbitstatic
Conversation
Jeremy
If I accidentally sat on a voodoo doll of myself, would I be trapped forever in that position, doomed to starve to death?
Marionette
How am I supposed to know?
Mike
You say, as if we don’t use you as a source of knowledge of the occult.
Marionette
*sighs* You wouldn’t be trapped.
#incorrect quotes#fnaf#five nights at freddy's#fnaf inheritance#jeremy fitzgerald#the puppet#mike schmidt
14 notes
aftonroboticz
Text

Michael refused to wear his “corpse of the month” shirt