Make sure you follow me on Twitch for me shenanigans. <3

I have my first non-holiday vacation day I’m taking in more than half a year coming up (it’s for a long ass appointment but it still counts 😂) And today I cooked and stored 3 kinds of soup to basically get me through the rest of the winter. Please don’t be like me and have a healthy work schedule to go with your healthy soups! - Pears

McCree: I can appreciate you wantin’ to have a productive day off but *stares at a mountain of food on the counter* what’re we gonna do with all of this?

S/O: Meal prep for the next month or so! We can freeze what we don’t eat this week!

S/O: *yanks mixing bowl out and slams it on the counter* DAMN RIGHT WE CAN!

Some drama draws for @mataglap from their Junkenstein flavored McHanzo story, Survival Instinct. 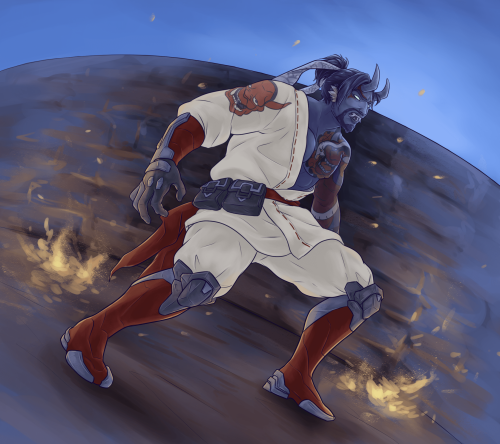 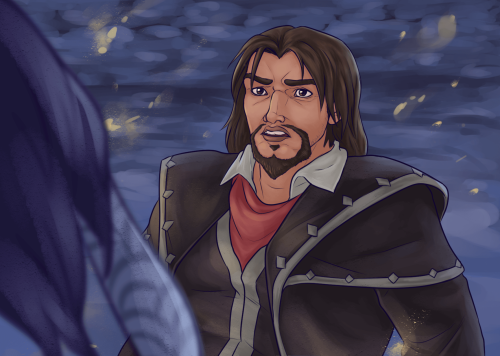 Mcdoodle because finals are coming up

Last fisherman/mermaid AU for the day!

The source of change, part 3

*After everyone has gone home, Hanzo changes and heads to his and S/O’s bedroom where S/O pretends to be asleep*

Hanzo: *climbing into the futon and whispers* A horrible night, but a good beginning starting tomorrow. We’ll watch the sun rise in the new year together, and I’ll have some good news for you then. Good night, S/O…

S/O: *gets up gently to not wake up Hanzo and heads outside wrapped up in a blanket. Heads towards the shed near the dock and finds a small kayak that she pulls out and places in the water near the dock. She gives one last look at the Shimada’s house* When I come back I’ll be a human. Wait for me here… *pushes the kayak out before leaving a note on the dock and hopping in to start paddling off*

Hanzo: *hits the alarm and rolls over* morning, s/o… are you feeling any bett— *sees her spot empty* Maybe she’s in the bathroom? *Gets up and starts getting dressed*

*In the living room*

Hanzo: Happy new year! Is S/O done in the bathroom yet?

Genji: I didn’t hear her at all this morning…

Hanzo: *walks to the bathroom, sees the door wide open and no one inside*

Jesse: She’s not in bed?

Hanzo: No… *walks to the back door and winces at the cold, seeing the sun rise over the ocean* I wanted her to see the new year’s sunrise!

Genji: I’m sure she’s… wait, why is the shed open?

Hanzo: What? *starts down the stairs and runs to the shed* someone’s been inside!

Hanzo: Our old kayak! *starts looking around and sees something on the dock and runs in that direction*

Jesse: She wouldn’t go skinny dipping after that prank last month, why would she—

Hanzo: *picks up her shirt and the note falls out* What’s this?

The source of change, part 2 (this chapter has nods to the “Father’s Secret” chapter from a while ago)

Jack: *in S/O and Hanzo’s room, gently pulling the futon over S/O’s shoulders before giving her a little otter chirp and scampering back to the living room with the others*

S/O: *stirs and sees the light in the hallway* Han…zo?

*In the living room*

Ana: Your father told me to only reveal how he became human if his sons showed complete devotion to someone.

Hanzo: You mentioned that before…

Ana: I believe you have shown that with S/O.

Genji: It’s pretty obvious to all of us brother!

Jesse: Could see it from space!

Jack: I knew it all along!

Gabe: I don’t like admitting it, but I see it too.

Ana: You saved her, protected her, and you want your future to be with her, yes?

Hanzo: I do. More than anything!

Ana: … Then I’ll tell you. I was a captain stationed here by the old Overwatch organization at the time. I met your father along the shore mourning the loss of a whale who managed to be beached and passed. From then on I met up with him discussing our lives respectively. He didn’t even have a name until he met your mother, she was the one who gave it to him.

Genji: Our mother named our father?

Ana: Yes, before he was just a nameless dragon god. Your father met your mother here in the village while watching a group of humans from the beach. He grew attached to Hiroko when she spied him off the coast and called out to him. From that day on he often came looking for her, and she waited for him.

Hanzo: We had no idea…

Ana: Because of her kindness and love, he wanted to be a human, to be by her side for the rest of their lives. So he sought the help of the monk to the north.

Jack: *ears perking up* What’s Zenyatta got to do with this?

Siebren: Yes. He’s a powerful monk who lives in the northern sea.

Ana: Zenyatta had a portal, called “The Iris” said to be capable of transforming beings to any form they could imagine. He went to Zenyatta and begged to be human. So Zenyatta struck a bargain, your father would be granted duality between human and beast, so long as only Hiroko would be the only person to ever see him transform again.

Jesse: Then let’s find him! S/O only wants to be human right?!

Jack: It’s not that simple, Jesse. No one knows where he lives in the northern sea now.

Siebren: Zenyatta was traveling on a ship that went down. The mermaids in the area all uses what power they had to save him. It’s the reason their species hasn’t had magic for the last century or so. They used it to seal him to safety underwater so he wouldn’t be destroyed. He’s an omnic and he surely would’ve perished without them!

Gabe: How’d you know all this?

Siebren: He once gave me a healing spell when I was injured by a dolphin hunter. He’s the only I lived so long! I remember where his dwelling is too!

Rein: SO THEN LET’S GO! We’ll take my boat and we’ll find him together!

*In the hallway unbeknownst to anyone*

S/O: … *returns to the bedroom and returns under the covers of the futon* … I’m not gonna let them uproot themselves just for me. Sojiro did what he did on his own…

The source of change, part 1

Genji: What is that noi—

Gabe: *busts through the door just having transformed back into a human* WHAT HAPPENED TO OUR PUP?!

Jack: *still a tiny sea otter, starts dragging in a halibut 3 times his size between Gabe’s legs* If she’s sick I brought fish!

Reinhardt: *follows behind them* Sorry, when I told them he transformed and ran off, I couldn’t get a shirt on him!

Genji: It’s alright, I’ll get some of Jesse’s clothes…

*Jesse and Genji explain the events of that night much to the horror of everyone in the group.*

Genji: Hanzo is with her now, so—

Gabe: I TRUSTED THAT FISHERMAN! HE COULDNT EVEN PROTECT S/O FROM SCUM LIKE THAT! Selfish, unreliable, just like all human—

Genji: STOP TALKING ABOUT MY BROTHER THAT WAY! *slams fist on the living room table* I know you don’t trust humans Gabriel, and you have the right to after your past, but you can’t keep throwing my brother under the bus for something that wasn’t his fault!

Jack: Gabe… *curls into Gabe’s lap and uses his paws to pet his hands* Genji is right. Hanzo has only tried to protect S/O and teach her new things since she came here. He loves her…

Siebren: I could tell when I met them the other day. A selfish cruel person would never reach out his hand to an old fae like me and offer me a chance at a new safe life.

Hanzo: *slides open the screen door to the living room* I accept your apology, Gabriel. But *surveys the crowd in the tiny room and the giant fish on the table* I’ve got some questions here.

Genji: Ignore the fish, I’ll make a stew or a curry for S/O when she’s ready.

Hanzo: She’s asleep finally. Hopefully she sleeps for the rest of the night.

Jack: Can I go tuck my pup in?! *pleading otter eyes*

Hanzo: Of course, she’d probably like that. *motions the doorway to jack where he waddles in*

Reinhardt: *helping Ana clean and wrap Jesse’s hands from the fight earlier* We heard what happened…

Ana: *tying a bandage* I think it’s time we discussed something, habibi.

Mccree: where do you get your arrows from archer? You have, hundreds of them.

Hanzo: from your ass, that’s where.

Mccree: my ass should open a shop, apparently it’s quite prolific.

I loved the platonic ask with Hanzo💙. Can we have Platonic love with Mccree please? [love your blog 💕✨]

A/N: I will never not love platonic requests, friends. Platonic stuff is just… so good.

All of you: no one seems to want to hear my r76 headcanon, I have no one to talk to-

I WANT TO HEAR ALL THE R76, JACK, GABE, JESSE, SOMBRA, OVERWATCH HEADCANONS

Ok ok ok ok wait! Fuck I’m red In the face rn jfc😳😳😳😳😳🤤🤤🥺 I’m starting a blog with my friend rn to write primarily about McCree plz dm me privately so when I write it I can @ you!!

Can we all admit this man is gorgeous? Please I can’t be the only one ! 😍😍

Fuck sake he could get it any day 🤤🤤

Finished the prologue of my new fic. Any sort of attention or help to gather attention for it is definitely appreciated!

“For ten years Hanzo Shimada had lived with the curse. Maybe not so directly as Genji did, but the consequences of it was what Hanzo had to deal with himself. And if he didn’t…he may never be able to see his brother’s face again.

Jesse McCree had been struggling on his own. A traveling bounty hunter with nothing better to do than steal the occasional jewel and slay the occasional threatening fantastical creature. It was easy to say Hanzo Shimada had been the most interesting thing to happen to him in a long while, and he wasn’t about to let the sullen man pursue his quest alone.”

If anyone wants to talk about my newly formed R76 ft. Baby Jesse Mermaid au pls HMU. My friends don’t like overwatch and I need an outlet so bad.

I found this rough draft in my old drawings; it’s a Hanzo Angst comic I never made, and I kinda? want to draw it now??

But I also want to earn from it, for reasons I described on my Ko-fi page, so I’m thinking about setting up a Ko-fi goal for each part of this comic (4 panels per parts, 29-30 parts in total).

Would you guys be interested to support this project? ʕ ᵒ̴̶̷̤́ᴥᵒ̴̶̷̤̀ ✿ʔ 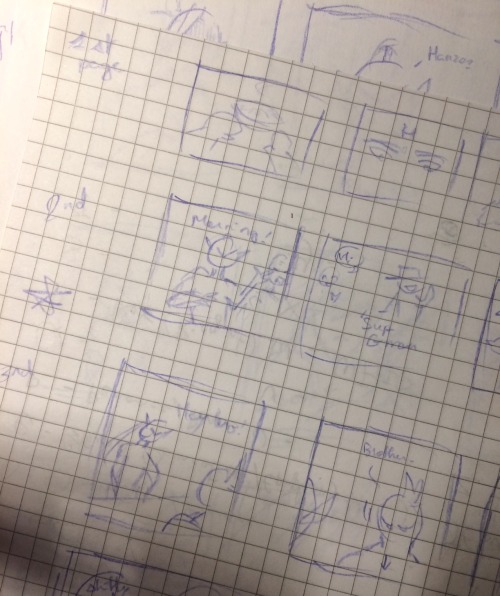 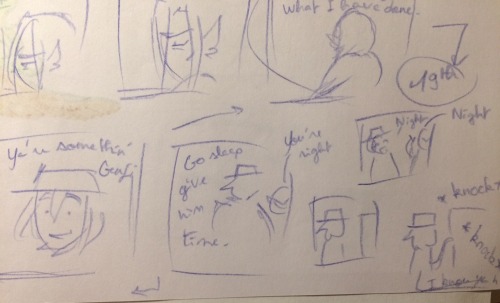 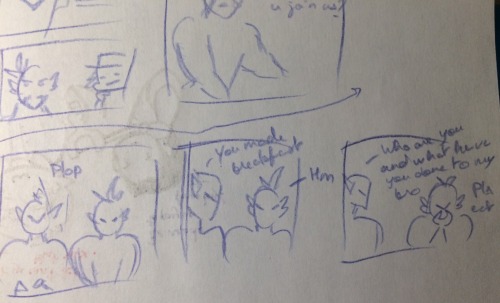 Witchy S/O: *writing a shopping list* Basil has an abundance of prosperity and joy. Tomato’s are for love and fertility, and cheese invokes wealth and grounding.

Mccree: so you’re saying, pizza is a prosperity spell?