Hello People if tumblr! I’ve come to share my personal story of discrimination, as a Jew. I believe now is the time for all minorities who are discriminated against to speak up. No one deserves discrimination. No one has been killed in my community, and I am thankful for that, I see even in my own city, members of other minority groups discriminated against, and I honestly can do nothing, as a kid (though I am white), I would never risk my life if I thought I would only add a second casualty, or a second victim. I think this makes me part of the problem, but at the same time I fear for my own life, which is threatened by the same kind of people. Whether an anti-semite, or a racist(which are kinda the same idea), I believe discrimination is the lowest form of human behaviour. (low as in worst, not as in least bad) .

I’m not looking for sympathy, I’m not looking for approval, or validation. I’m here to tell my story, and hopefully, someone in a similar situation can take solace in the fact they are not alone. Anyways, now that I have made clear my intentions, let us begin.

Three years ago, I tested for my junior black belt, in the group I tested with, there was one boy, a few years older than me, who we’ll call L. Now L seemed to be a nice person, and was nice to me, and he knew I was Jewish. I treated L with respect, and he respected me back. Fast forward to the end of 2019. I wake up on a Saturday morning and my synagogue is on the news. What’s this? Someone drew a swastika on my synagogue. Of course I was not very pleased with this situation, as this all took place during the Jewish High Holidays, the holiest days in the Jewish year. Now, back to L. I find out, within that same week, the names of the vandals who drew the swastika were published as they were above 18s. I check the names and oh, what’s this? L? The guy I trained with at my karate school for 6 years? Who had never shown an ounce of hatred to me? How could this have happened? It took me a few weeks to understand the gravity of the situation, and to understand what could have motivated L to do this. I had decided that he must have been drunk, or high, or tripping harder than any other human ever. My father told me, “sometimes, the nicest people, can do horrible things.” and that idea changes the way I viewed the whole scenario. In the end, I forgave L for his behaviour, and when he wanted to rejoin the karate school, I said he should be given a chance, because he had obviously forgotten what he had learned about respect and kindness.

Not two weeks later, I open a random locker in my Highschool, what do I find? You probably guessed it, more swastikas, this time with the friendly message “death to all Jews” this angered me to no end. I left my class early at the behest of my parents, and went to the vice-principal with the photos I had taken of the locker. My father was called into the school, we discussed with the VP. Then, nothing. I was cut out of the loop. The school bolted the locker shut, and called it a day. They spoke the students who used the locker, but that lead nowhere.

In the span of two weeks, my life was changed for better or for worse. My story is one of a privileged white boy, finally understanding a fraction of what some of my fellow students might feel every day. This was an airhorn to the face. The sense of safety in my community was brutally ripped from me, I no longer felt safe in my school, or my place of worship. That was new.

This happened when I was 14. I’m sure this is much older than some people’s first experience with discrimination. I’m sure this compares nothing to what some others might experience. But this was a wake up call to me, as a white jew. I learned that, even though I am white, I am still a Jew, and nothing would stop people from defining me by my beliefs. No one is immune to discrimination. No one should ever have to suffer from discrimination.

No one I know has been beaten, or killed for being a Jew. But I know that my city is the worst city for racism in the region I live. I want to fix my community, I want to close the divide between the discriminated communities and come together to help protect each other. Maybe that’s too ambitious, maybe that’s overzealous, I’m a kid, let me dream. This is my story of discrimination, I hope it helped you feel a bit better about your own experiences like this. You are not alone. Stay strong, stay united.

If you feel stuck, or are scared to come out with your own story. Take it from me, even just typing this made me feel just a little bit better. Find someone you trust, seek help if your are being discriminated against. Please, Don’t become another statistic.

(Sorry for bad formatting or grammar, on a phone, I also suck at grammar)

Does anyone know where the mizrahi jewish pride flag is??? please please help me out. I really need it 🥺

I’m reading Abraham Joshua Heschel’s God In Search of Man, and I gotta say, I’m not impressed. I’ll be writing a review of the book when I finish, but it’s so underwhelming after hearing all the hype about the man’s theology. Why is his work so popular? Makes no sense.

Did you guys ever tell your parents about something that happened in school, and you didn’t even realize it was a big deal until they get upset?

I just told my mom we had a teacher read The Boy in the Striped Pajamas and show us the move in 5th/6th grade (so 10-12 years old), and she got pretty angry, saying the teacher should have told the parents and actually had discussions with us about the material instead of just showing it to us.

”She should have realized how distressing it would be to any Jewish students she had! You were a child!”

And I just kinda sat there like “Actually yeah. That makes…a lot of sense.” 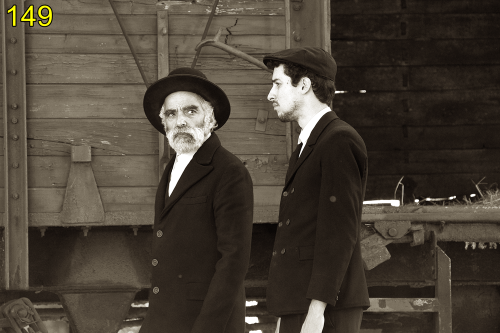 I don’t want to see any of my Jewish brothers, sisters and siblings sitting out and staying home during these protests. Remember our heritage and our legacy. We’re a surviving people, and we have a history of oppression and segregation. Stand up in alliance with our black communities. It’s our duty as Jews.

#i hated her since the strip club video, #dua lipa, #antisemitism, #jumblr, #jewish, #i speak
6 notes · See All
progressivejudaismPhoto

“To Black-Jews who are at the intersection of anti-black racism & antisemitism, I’m so sorry for the pain you’re experiencing as once again black bodies are abused by the US State.  You’re not alone. The wider Jewish community sees you, loves you & supports you.” from @BenMFreeman 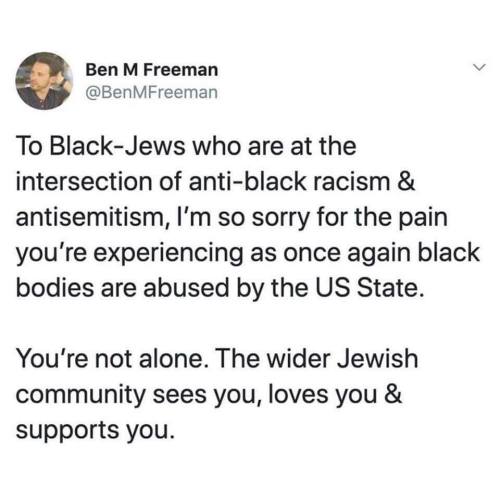 This morning we got a phone call at around 5am from one of my aunts to tell us that one of her sons, so my cousin, had been attacked by goyim and was in hospital. He’s still there and probably will be for at least a few more days. And I’m tired. I’m so so tired of this. At first I was angry and scared and I couldn’t stop shaking, but now I’m just exhausted. Because this kind of thing keeps happening and every time it does I feel like I lose a little piece of me - like a little part of me just gives up. And by now it’s happened so much that all I can feel is numb because it won’t stop, maybe it never will, and I’m done. I’m so fucking done. I just want to disappear, to shut down and never have to deal with this again.

#Personal, #vent, #Antisemitism, #Jumblr, #Jewish, #I’m so tired of this, #please G-d, #when will it stop
9 notes · See All
jewishicequeenText

gay and bisexual religious people are so strong. it can feel so confusing and conflicting and both sides will just tell you to get rid of part of yourself and so few people respect you as a whole and recognize that your spirituality and sexuality are both parts of who you are and you deserve full respect and acceptance as you are without having to compromise. being gay, lesbian, or gay and being christian, muslim, jewish, hindu, or whatever religion you belong to is a wonderful part of who you are and no one can take that away from you. you are just as much a part of the lgbt community AND your spiritual community as anyone else. you are loved and you are important.

hello jewish tumblr I need an image translated please!!! I’ve got the first two lines (anti fascist, anti police!) and I think the third line has something to do with black lives but I’m not sure!!! 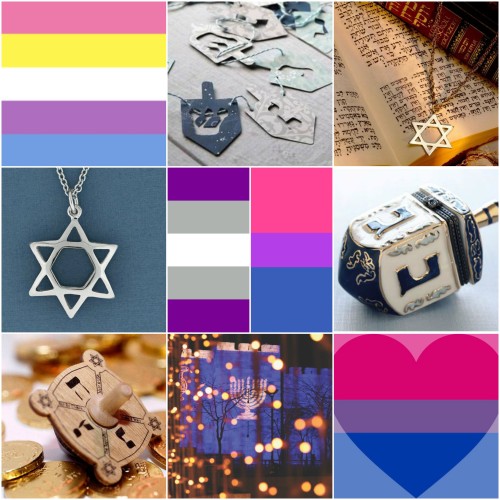 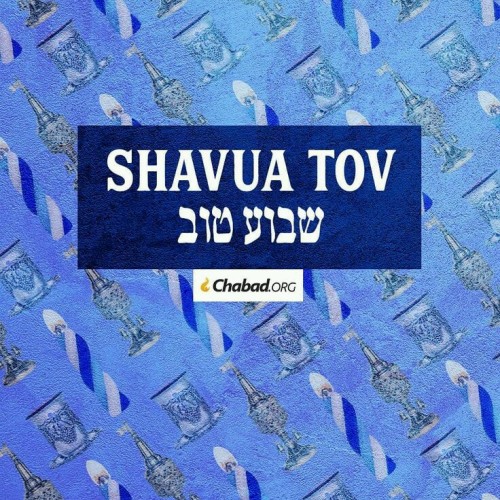 I have a list of questions already, but do you have any burning questions about conversion? Ask or PM

Do you have any resources that might be useful to link? PM

Me; I want to participate in Shabbat so badly

My mom; No religion under my roof

My Jewish Friend; *Invites me to his families Shabbat dinner*

Me; *Is instantly so happy, I can just tell this is the right path for me*