Jin Ling throws the robes to his face.

“I’m not wearing that!” he announces. “I’m Lanling Jin heir-and-parent, I cannot wear the colours of another sect.”

“Heir apparent,” Jiang Cheng retorts with a barely controlled snarl. “Apparent, as in you appear to be, until your aunt gets another child.”

The boy’s scowl deepens until it’s like looking into a mirror and Jiang Cheng knows, he just knows that this will be another difficult day. It always feels like he gets too little time with his nephew, and yet somehow Jin Ling’s personality takes after him rather than all those pompous, over polite assholes back in Carp Tower. It would piss him off if Jin Ling were as slimy as the Jins, sure, but sometimes, just sometimes, it would make things easy and that’d be nice.

“I’m sure it’s heir-and-parent,” Jin Ling retorts petulantly, as if he knows more at ten then his uncle ever will.

Sometimes, Jiang Cheng swears there’s something of Wei Wuxian in that kid, and it makes him want to both strangle him and hold him close so nothing can ever hurt him.

“I’ll show you later how it’s written,” Jiang Cheng threatens. “Now stop being stupid and put this on until I can have your precious Lanling Jin robes cleaned. Or do you want to stay in your underwear?”

“I have to show I’m a Jin!” he explodes. “Jin Chan says if I didn’t wear gold, nobody would even know I’m one!”

Something collapses inside Jiang Cheng’s chest and for the first time in his life, he wants to harm a child. Not Jin Ling of course, but Jin Chan and all those horrid little pests in Carp Tower who think they have any right to hurt his nephew. Jin Ling is so much like him, what little good he has and all of the bad, but that fear of not being good enough is really something Jiang Cheng wishes hadn’t been passed to his nephew.

“So you’ll let Jin Chan dictate what you wear?” he taunts. “Some heir apparent you are if the first loudmouth kid passing by can make you doubt yourself!”

“He doesn’t decide for me!” Jin Ling protests. “Give me the stupid robes!”

Jiang Cheng hands them to him, rolling his eyes. They really need to work on that, Jin Ling’s taste for contradiction is going to get him in trouble someday.

They need to work on so many things and Jiang Cheng knows he’s the least qualified person to tell that kid how to get a grip of himself, but he also only trusts Jin Guangyao so far when it comes to raising Jin Ling right, so he’ll have to be the one doing this.

He hopes he doesn’t mess up that kid too much.

Wei: I dont have a favorite junior. I love all of them equally. Jin ling, sizhui, zizhen, and-

#the untamed, #mo dao su zhi, #the grandmaster of demonic cultivation, #wei wuxuan, #wei ying, #yiling patriarch, #yiling laozu, #lan jingyi, #lan sizhui, #lan yuan, #jin ling, #jin rulan, #ouyang zizhen, #not sure if this was already done, #but i thought of it while watching again for the third time, #so i decided to post it, #incorrect quote, #source: unknown
12 notes · See All
polkadotdragonxText

Jiang Yanli, Jin Zixuan, and Jin Ling’s current Alliance records (Including JZX’s under his real name and fake name!) in my Untamed/MDZS Firefly fusion fic ’Burn the Land, Boil the Sea (You Can’t Take my Son from Me)’.

In picking the character of JZX’s fake given name - I wanted to pick something with the same reading but a different character. But I don’t know chinese so I found it using google - according to my google fu it’s the character for ‘to chose’ or 'to select’. As JZX chose his new life in my fic, it felt appropriate :) But if that is not actually what the character means or if it’s somehow innapropriate to use as a name, please let me know! :D

Can someone remind me what Jin Ling’s gift from WWX was? I want to say it was a bell but I can’t remember and I don’t want to comb through a hundred chapters or 50 episodes to find it

Lan Jingyi: I laugh in the face of danger!

I think it was already kind of collapsing via exposure to the reality of Wei Wuxian! That’s how you get Jin Ling crying on the pier after Wei Wuxian and Wen Ning show up to rescue them, Jiang Cheng inviting Wei Wuxian into the throne room, and that whole sequence of events at Carp Tower where Jiang Cheng really should be turning in the Yiling Patriarch over to his sister’s brother-in-law so they can set him on fire as a family and instead he is making pointedly snotty comments about how thin Wei Wuxian’s cover story is and letting him roam around his nephew’s home unimpeded. There’s this great line from the book where what Jin Ling takes from the experience is that Wen Ning, Wei Wuxian, and Jin Guangyao did all play a role in his father’s death, but he can’t really hate any of them and he’s not going to feel bad about that. I really like that for him.

#jin ling, #jiang cheng, #wei wuxian, #i do think it's a little bit unfair to wen ning, #who regardless of what universe we're in, #had no say over either his zombification or what various flautists used him to do to zixuan, #but it's not like jin ling knows the ins and outs of flute based zombie control, #and anyway i'm sure he'd appreciate the sentiment, #i do kind of assume his feelings about jiggy are complicated, #not hating someone, #even loving them and appreciating that they loved you, #is not the same thing as being cool, #with the roles they played in the death of your aunt, #cousin, #father, #and to some extent mother, #it is very hard being jin ling, #i think he handles the experience with a great deal of grace, #considering, #man imagine if jiggy had bothered to go after jiang cheng, #and win his trust, #they're coparenting and he's very alone i don't think it, #would have been that hard, #prickly and disenclined to make new friends as he is, #game over right there D: saved again by jc's personality, #Anonymous
52 notes · See All
hamlietAnswer

I think Jiang Cheng deeply loves Jin Ling and the feeling is mutual. However, Jiang Cheng has never showed he loved someone in an entirely healthy way that we know of, so yeah, there are unfortunate aspects in how Jiang Cheng parents Jin Ling. That said, I think that after the conclusion of the novel, Jiang Cheng will hopefully move away from that.

I don’t think that the Wei Wuxian thing is entirely on Jiang Cheng, honestly. Everyone hated Wei Wuxian, and knowing that Wei Wuxian had killed his father–which Wei Wuxian did, even if by mistake–is kind of enough to make Jin Ling dislike Wei Wuxian on his own… at first anyways. I also feel Jin Ling clearly did not have the same opinion as Jiang Cheng on demonic cultivators–he may not have liked it, but he did not immediately try to kill like Jiang Cheng insisted he do, and even helped Wei Wuxian out.

But in terms of the issues in their relationship, the main one I saw was him treating Jin Ling not unlike his father and mother treated him, which made me sad. I wrote about that more in depth here.

I was pestering @kotaboda the other day with the concept of the junior quartet as a boy band, so now I’m unleashing it on all of you as well

Jin Ling  would be sold as the “tsundere” member, to his immense displeasure. He’s always so pissed off, but for some reason fans eat it up and adore him for it. The times he’s tried to complain about it, everyone reacted with “awwww look at him being embarrassed”, so he has learned to go with it (very begrudgingly).

Sizhui is what fans call the “church boy”. He’s seen as the innocent one, especially in comparison to the chaotic mess that is everyone else. If he says something or acts in a way that is even slightly rude or not as innocent, people go crazy over it.

Jingyi is the true troublemaker of the band. If there’s controversy, it’s because Jingyi either started it or is currently instigating it. Some might say he’s too rude, but everyone agrees he’s the only one that doesn’t give a fuck and so says what everyone is already thinking. Because he’s always justifiably angry/rude, fans always forgive him without a second thought.

Zizhen is the one band member that’s always cracking jokes and making interviews less awkward, he has an insane amount of charisma. If Sizhui is the perfect boy, Zizhen is the nice boy next door. He’s also a huge romantic and whenever he’s allowed to talk he ends up spewing poetry. If you dare call him average looking expect absolute hell from his fanbase. 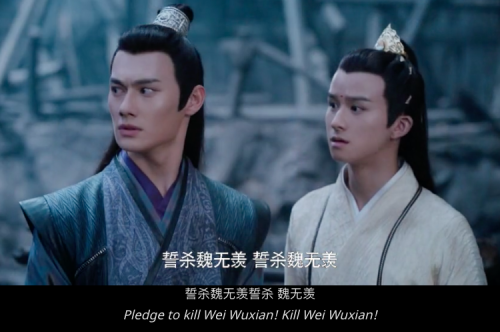 Okay so, I wanted the juniors to see and experience the real story of WWX, since they only know about the rumors and WWX never really speaks of his past actions, so they only heard about the ruthless and heartless Yiling Patriarch and how most of his story has always been twisted and inaccurate so i kept thinking how would the juniors react if experiencing what wwx had? how will their view on him change. And so the main idea became a fic which I’m not sure how long will it be since I’m currently working on it but I’ll drop some chapters now.

happy to announce that “this brat, why does he stab the same spot as his uncle did” is still exactly as devastating a line on repeat viewings

#jiang cheng's FACE, #never mind how they all manage to hear each other at these distances, #AND JIN LING!!! BABY, #this family.... i can't, #wei wuxian, #jiang cheng, #jin ling, #the untamed, #leela watches the untamed
23 notes · See All
kasielartistText

They make me cry

feel kind of sorry for him, the one character who is actually having a moment 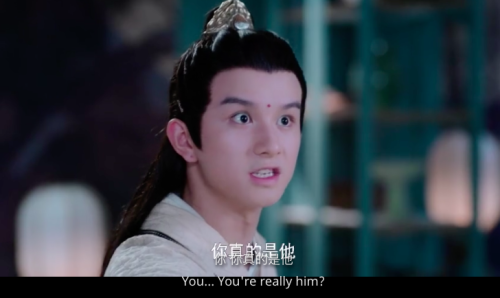 #everybody else is like; i just want to exit this conversation, #while jin ling is having a full blown existential crisis, #jin ling, #the untamed, #leela watches the untamed
14 notes · See All
spicy-congeeText

Jin Ling: Uncle, what’s the goofiest thing you’ve ever done? Because I bet I just topped it.

Jiang Cheng: I doubt it. My actions led directly to the death of the only thing I’ve ever loved.

Jin Ling: This is maybe twice as funny as that!

Judge: How do you plead?

Jin Ling: Just lock him up.

Do you ever think about the fact that wwx reincarnated is the half brother of Jin Quangyao and Jin Zixuan and also, now, the biological uncle of Jin Ling. Oh and he’s also Jin Quangshan’s son… my head hurts

Imagine jc is telling wwx that he’s not a part of Jin Ling’s life and he’s not his actual uncle and wwx is just like “well actuallyyyy..”

sometimes I feel like I don’t actually ship Zixuan/Yanli for the sake of the characters themselves, but because I don’t want any version of the story in which Jin Ling doesn’t eventually exist