NOTES: Thank you for requesting!

You peered out from Satoru’s side. You were hiding behind him, hands clinging onto his jacket.

“Isn’t she the cutest?” Satoru cooed.

The baker stood there with a lazy expression on her face, completely used to her regular showing off his beast. 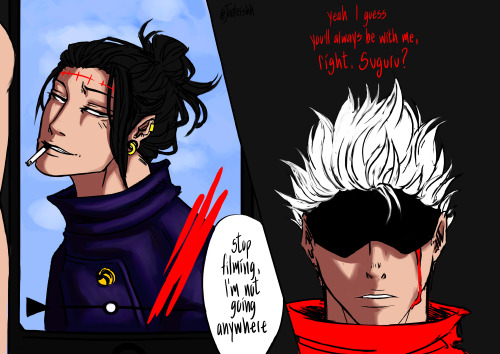 Omg yes the poor man is just so starved for your attention. Yeah sure the man probably had been in alot of relationships before but he was never this clingy with them. You bring out a side of him, that wishes for you to dote on him as much as possible 🥺❤ in the spirit of I’m so stressed from university I’m going to die I’m gonna write some more clingy Gojo 💙

*the morning after the wedding*

*jumps around the bed*

y/n, still half asleep: satoru shut this kid up he thinks we’re married

Well I love this manwhore

Like/reblog if you saved and loved it 🤎

love how akutami sensei hates gojo satoru, but still made that white haired bastard one of the prettiest characters to exist.

Categories Of Characters Who Is A Pro With Their Tongue

Presentation Mic from My Hero Academia

Detailing to why will be extensive. If need to edit and explain why, I will definitely make another part or add it to the post.

How could you not simp for him

Like/reblog if you saved and loved it 🍑

nobody loves gojo as much as studio mappa does

“I know that you’re wrong for me

on the day I leave”

Gojo thought the moment he felt his heart flutter when he heard (y/n) let out a merry laugh at whatever one of the students spouted out.

This is so so so bad…what a cruel cruel thing.

Gojo glanced away from the sight, scared that if he looked any longer, his heart would explode.

How utterly pathetic how if (y/n) asks for anything, he’ll give them everything.

Absolutely everything he could give.

If Gojo could buy the world, he’d give it to them.

Why me? Shit, what a stroke of bad luck.

Gojo had cursed every moment his heart fluttered.

“Gojo-san, are you okay? You look like you need to shit.” (y/n) asked, placing a hand on Gojo’s shoulder.

Kind yet blunt. (y/n) was a different breed.

They were brave and strong, able to face situations that can have other’s shaking on the spot.

They were fun and creative, able to lift the mood with just a few words.

And the sharp tongue (y/n) was blessed with…or cursed, some may think, had them caught in terrible situations, sometimes ending with Gojo having to save them.

But everything about them, everything about (y/n), may it be their sharp tongue or the bell-like peals of laughter that accompanied them wherever they went, made Gojo’s heart flutter, constrict, as a flash of fondness, warmth, and softness filled him.

But he knew, from the start, that this fluttering on his heart, this feeling, was bad news.

“Shitting is normal, Gojo-san. You can’t tell me you don’t shit out all those diabetic sweets you eat.” (y/n) said, crossing their arms over their chest.

Gojo’s gaze lingered on them for a second, his eyes sparkling with an emotion not visible to anyone else because of his blindfold.

Why does it have to be me, (y/n)? Why do you have to be so damn attractive?

Gojo grabbed the reins for his thoughts before it went too far, hiding his clear displeasure with a mocking grin.

“I suppose you’re right. Gotta hand it to you, (y/n) for being so smart.” Gojo praised as he slung his long arm around (y/n)’s shoulder, ignoring the fluttering of his heart; ignoring whatever feelings he had.

Because it’s no good.

(y/n) narrowed their eyes at Gojo.

“Are you mocking me?” They asked flatly, not at all bothered by how close Gojo was.

Gojo felt relieved and hurt at that;

“Not at all, (y/n). You’re a keen individual, gifted with a talented mind and a sharp tongue…” Gojo trailed off, removing his arm from (y/n)’s shoulder.

He then proceeded to walk away from them, only to dramatically glance back at (y/n) when he was a good few feet away.

“Honestly, all I have is praises for you.” He said, sending them a grin before facing forward and waving for (y/n) to come and follow.

“Come on, let’s buy some dango and sweet tea.” He ushered, acting as if his heart was racing…acting as if (y/n) didn’t make him feel things.

And Gojo pushed the growing feelings in his chest as he let out a laugh that sounded more in pain than happy.

“I brought you down to your knees

Cause they say that misery loves company”

“If it’s hurting you so much, then just fucking tell them already.” Shoko said, rolling her eyes as she took a long drag from her lit cigar.

The stress Gojo was putting her plus the usual stress from work, had brought her back to smoking.

“I can’t…nor do I want to.” Gojo huffed like a hard headed child.

Shoko let out a sigh as she purposely blew smoke at Gojo’s face.

“If you’re not gonna do it, then stop bitching about it. Don’t drag me down on your little train of misery.” She said.

Shoko deeply cared for Gojo, she did. But he was destroying himself because of his feelings and she’d prefer it if he didn’t drop his emotional burden on her.

Saying what she wanted to say, Shoko had dropped her cigar before stomping on it.

“Face your feelings before they kill you.”

“It’s not your fault I ruin everything

Gojo had wanted to offer (y/n) a shoulder to cry on. He wishes he could.

But he couldn’t. He wouldn’t allow himself.

Because he was scared.

Scared that if he offered (y/n) his shoulder to cry on, he’d only fall deeper for them.

“Stop crying, (y/n). You’re fully aware that life as sorcerer’s is dangerous. We face death all the time.” Gojo said, arms crossed over his chest as a way to stop them from reaching out for (y/n).

(y/n) glanced up at Gojo, nose red and tear stains on their cheeks.

They let out a shaky pained laugh as they wiped their nose and cheek with the sleeve of their shirt.

It took all of Gojo not to engulf them in a warm hug, tell them that it’s okay…that he was there for them.

“Can’t you comfort me, Gojo-san?” (y/n)’s voice was small as they hugged their knees to their chest.

Gojo bit the inside of his cheeks to not cave in to (y/n)’s plea.

“No. I’m not going to give you the comfort that you want, (y/n). Grow up and face that this is the reality we live in.” He said, rather harshly.

(y/n)’s shoulders sag as they buried their face on their knees, letting out a broken laugh.

“How cruel of you, Gojo-san…” (y/n) murmured, their voice muffled.

Gojo gritted his jaw so hard, that he was worried he might break his teeth.

This is the only way.

Gojo thought as he turned on his heel, walking away as (y/n)’s sob racked through the room.

He walked away with a heart too heavy for him to carry.

“Baby, angel’s like you can’t fly down here with me

I’m everything they said I would be”

“(y/n) had transferred to the Kyoto school…they were running low on staff and they had offered to go.” Shoko suddenly informed the snowy haired man one day.

Gojo hummed, acting indifferent despite the bleeding pain in his heart.

He already knew that.

After all, (y/n) had told him they were going.

“Gojo-san, I’ve been offered a position in the Kyoto school…” (y/n) had approached him one day.

Gojo fast steps faltered for a second, before they shifted into a lazy shuffle as his heart dropped to his feet.

“And? Why should I care? Why are you even informing me of this?” Gojo asked, voice emotionless.

He halted and glanced back to see (y/n) bow their head, a small smile on their face.

“I knew you’d ask that….” They murmured.

“I just wanted you to know….I wanted to hear your opinion on it….”

Gojo wanted to tell them to stay. Don’t go.

But he could not allow himself.

Instead, he ignored the sharp pain in his heart and waved dismissively at them.

“Do what you want. I’m not your dad or teacher.” Gojo said dismissively.

Because, as he constantly reminded himself, this was the only way.

When Gojo had moved to walk away, (y/n) spoke up.

“I know I’m not anyone important to you…” They trailed off, biting their lower lip.

No, you’re the most important person to me…

Gojo bit his tongue to prevent himself from saying things that will only make his heart bleed more.

“But Gojo-san is someone very important to me…” (y/n) said as they placed a hand on their chest with a sad smile.

Gojo willed his face to not falter.

“Everyone’s saying how Gojo-san’s so mean and arrogant…a prideful prick, they say….”

Gojo wanted to laugh, because it was true.

Hearing (y/n) practically calling him a prick made the pain in his chest lessen just a tiny bit.

“But I think you’re very kind.”

“An arrogant piece of shit, yeah…you are one…” (y/n) said, chuckling a bit.

“But you’re a very kind arrogant piece of shit….that’s why I-”

(y/n) roughly shrugged his hand away, holding his wrist.

“Why shouldn’t I say it? It’s the truth.” They said, eyes soft and gentle.

“Because I don’t want to hear it.” He said, voice cracking.

(y/n) took in a deep breath before sighing.

“Alright….but you already know what I was going to say…” (y/n) trailed off.

“Don’t worry, Gojo-san…I’ll be out of your hair immediately….”

“I’m sorry for wasting your time. I guess this is goodbye…”

With that said, (y/n) was gone, leaving without a trace and taking Gojo’s injured heart with them.

“Why didn’t you ask them to stay?” Shoko asked, knowing that Gojo was hurt upon (y/n) departing.

“Because…” Gojo trailed off, no longer able to hold back the clogging and drying of his throat as his eyes stung with tears.

He never did get to finish his sentence because he had broken down after that.

Shoko had offered him some comfort, already knowing what he was going to say.

Because I can’t love them freely….because my love would be my weakness and I couldn’t bear the thought of putting (y/n) in harm’s way…all because I’m in love.

Because if I were to love (y/n), I’d may as well have cursed them.

Because love is the most twisted curse of them all.

@potatofu-art and I decided to make a little art trade and these pieces were the results! I did the lineart for the first piece and the coloring for the second while the cutest and most talented potato ever did the coloring for the first and the lineart for the second. PLEASE LOOK AT THOSE SKILLS I’M IN TEARS NOW GO AND SHOWER THEM WITH ALL THE LOVE YOU HAVE