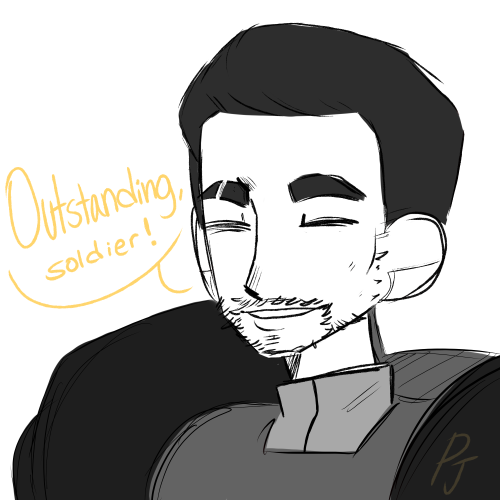 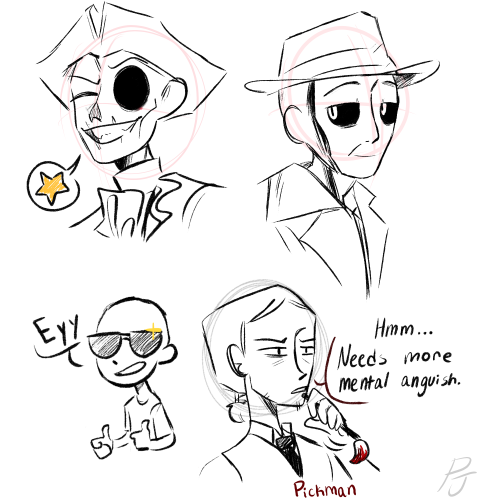 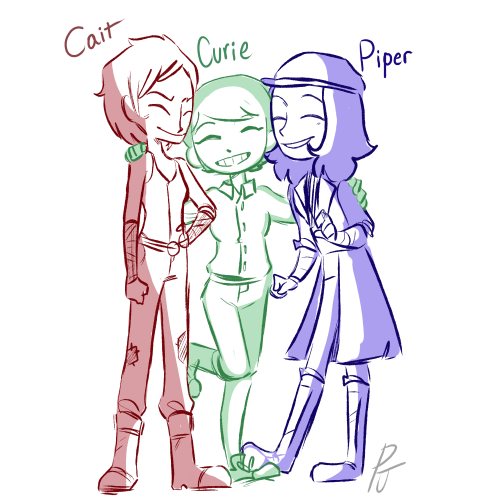 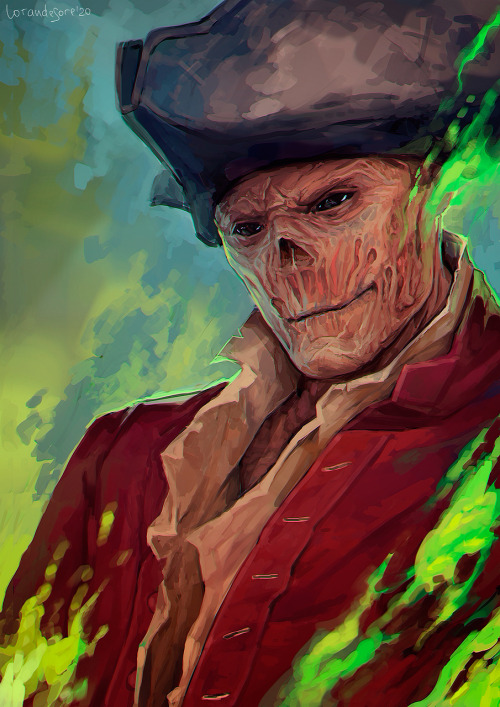 What’re they listening to? 🤔 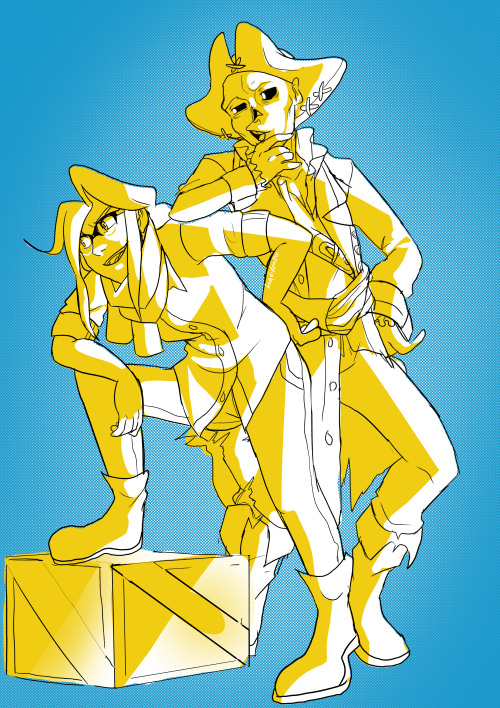 Finally finished this! I had loads of trouble drawing them as people so I went the anthro route. I also cheated and added two extra characters but I really wanted them both.

Tails, Noir and Ham were for @i-dont-need-socks-mom

Tony and Pepper were for @multifandom9573

Hancock was a suggestion by a friend

4) get thrown in a fancy refrigerator for 200 years

6) forget about your missing child for 60 hours

“What do you mean you haven’t used righteous authority?” Lyons squawks out as Angel gives him a sheepish look as she shrank back.

“To be fair, I haven’t had to. Since I have a bat and two other guns.” Angel tells him holding hand ups to quickly defend herself. Said bat was in her backpack gleaming in the sunlight.

Lyons let out a sigh or what sounded like a sigh from behind the hamlet. “You’re going to learn how to use it now.”

As early as they could the next morning the group left, on there three hour walk to Lexington. Angel suspected that this was a ploy by Lyons to get her alone to talk and to see if she was courtable. Those Angel knew she wasn’t courtable, that fact was drilled into her head. They had made it to the outskirts of Lexington, Lyons and Angel had made small talk and somehow he had asked about the rifle.

“I take it you know about kickback?” Lyons asks as he searches for some targets.

“It’s the backward movement of a gun when it is discharged it can also be called recoil.” Angel tells him with an eye roll and scoff, “My uncles taught me about kickback.”

“Good that saves us some time, perfect see those bloatflies?” He asks, pointing to a pair of giant flies.

“Yes, why?” Angel asks grimacing as she gave him a sideways glance.

“Is this necessary?” Nick asks annoyed at Lyons’ actions as he was tapping his foot.

“Very much so.” Lyons tells the old synth trying not to snap, thanking whichever god that the flies hadn’t spotted the group, “Take your time.”

“Right.” Angel tells him, pulling the trigger and falling backwards onto the ground. The shot went off, killing one of the flies as the other started to buzz over, but was quickly killed by Hancock.

“Ang you okay?” Nick asks, kneeling next to the young omega.

“The fuck? That kickback was insane.” Angel growls and winces, “You could have warned me that it was going to be, kickback from hell!”

“I could have but you needed to learn.” Lyons nonchalantly tells her while walking away.

“That guy is a fucking prick.” Hancock states as Angel got off the ground.

“Agreed.” Angel tells him with a nod, as they caught up to Lyons. Angel took in a deep breath as she matched Lyons’ pace and walked next to him.

Okay but like I’m actually kind of proud of this one and I hope it makes up for all of the short chapters I’ve been doing. Enjoy!

(Jinx is my sole survivor character)

Jinx sat at her office working on her paperwork as her son continue to guess her name.

Jinx: Hancock and Maccready are listing the worst names ever. I’m surprise Maccready’s son have a normal name

Shaun: Duncan told me his mom named him.

Jinx: That make sense. Anyway Shaun, do you have more guesses?

Shaun: I have three. Heather, Jane and Mary?

Jinx: It’s not Heather, nor Jane. A lot of people thought my name was Mary for some reason.

*laughing as she remember old memories*

Shaun: *sighs heavily and plopped his notepad on his mother’s desk.*

well I’m tired of guessing.. can you at least tell me why your nickname is Jinx???

Jinx: *grabs his notepad and start to write something on it*

I needed a cool name. Once I enter the wasteland I knew my real name isn’t going to send people running away.

Do you want a cool nickname too? How about scout or Einstein. Or even better, my little good luck charm!

Shaun: *start pushing his mom away* Mooom!~ Stooop!~ I’m not a kid anymore! Plus those nicknames are lame!

Jinx: *stops, but give him one more kiss on the cheek*

Fine, you’re lucky I have a meeting soon.

Don’t think too hard, Shaun. You figure it out. You’re a smart kid. See you later, I love you.

*walk out the office*

Shaun: *straighten his hair as he pout*

Mom is so annoying sometimes. And what was she writing in my notepad?

*picks up his notepad and reads it*

Go back home and your father will tell you..

changed the rules a bit 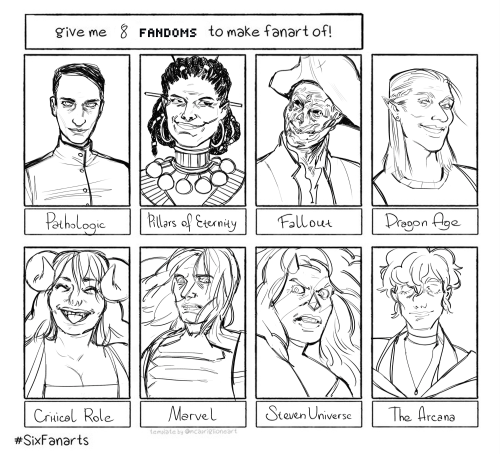 Respecting Women is hard work and does it make you a simp? Only to Mac is does…

Rafe Spall as John Hancock was so good.

#he was so dandy!!, #his OUTFITS, #i just. i love him., #every scene he was in. a masterpiece., #sons of liberty, #john hancock, #rafe spall, #amanda speaks
1 notes · See All
falloutdovahPhoto 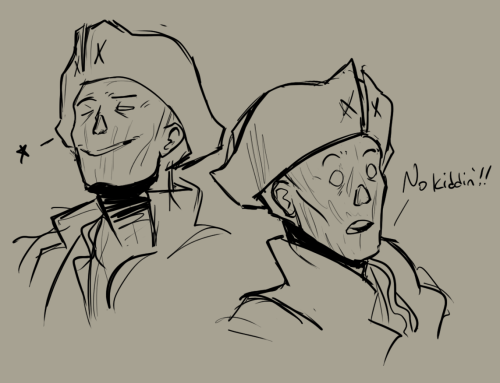 “Once we mopped up, we strolled right into Vic’s quarters in the State House, wrapped a rope around his neck, and threw him over the balcony. And there I am, gun in hand, draped in Hancock’s duds, looking at all the people of Goodneighbor assembled below. I had to say something. That first time I said ‘em, they didn’t even feel like my words:

I’ve been wanting to draw my second favourite companion from Fallout 4 for a while now. I couldn’t really get to it until now though. I’m actually quite proud of this, the background isn’t as bad as I usually make them. Still need to practise lighting.

#hancock, #mayor hancock, #john hancock, #john mcdonough, #fallout 4, #goodneighbor, #vic, #hanging
8 notes · See All
viewfromthevaultAnswer
For the expression meme: danse in 2c (definitely at Hancock doing the ¯\_(ツ)_/¯ but you don't have to draw that part)

But Lilly… I gotta

Now the real question is what they could be bickering about

#fallout, #fallout 4, #fo4, #paladin danse, #hancock, #john hancock, #fo4 hancock, #expression meme, #myart, #lillysteam44, #thanks for being ever so patient with me!, #i had to hold off until the time was right
59 notes · See All
vault-tec314Text

(Jinx is my sole survivor character)

Jinx and Hancock hiding in a supply closet from raiders.

Jinx: We are outnumber, low on bullets, and stimpacks… How the fuck we are going to make it out alive???

Hancock: *take 2 container of mentats from his pockets* okay… so like this a dumb idea but this could work.

Jinx: you really think a few mentats can help us??

Hancock: Hell yes and plus we have no plan! We can either go guns blazing or take the mentats to make us smart enough to think of plan and leave out with minor injuries.

Jinx: *deciding for a moment before taking one of the container* Hancock, if we die. I will whip your ass in the afterlife

Hancock: *laughs and wink at Jinx* I always knew you was kinky.

I haven’t thought of this before nor have I even seen anyone mention this but since Hancock is technically a mayor, couldn’t he just preform marriages?

A person and robot want to get married? Sign him the fuck up! He’ll even bring the drinks and food!

Never give up! Keep fighting! 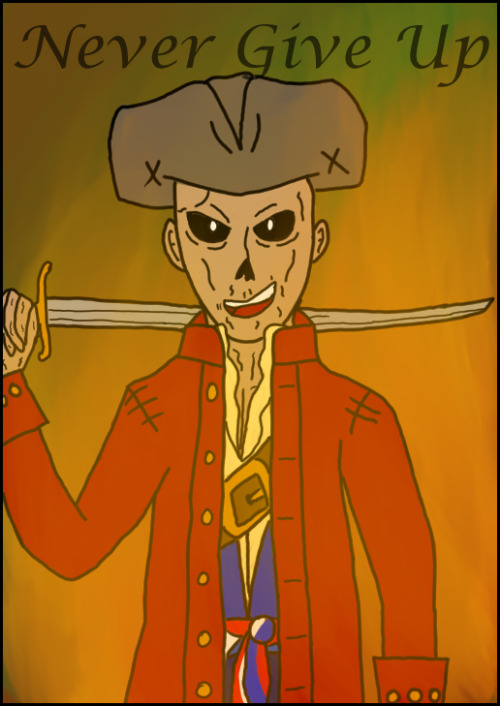 #John Hancock, #Hancock, #Fallout 4, #fallout 4 companions, #of the people for the people, #I missed drawing this ghoul so much, #inspiration
13 notes · See All
honey-in-a-jarText

“This is me” from The Greatest Showman

But it’s just Hancock and everyone in Good neighborhood + Nick and some other synths and DiMa(?).

I’ve just had this playing over in my head, I’ve just had the scene of Hancock doing backflips and dance numbers while singing. It’s just so in character of him. I’ve also jus being listening to “This is Me” nonstop too.

#fo4 companions, #fo4, #fallout4, #falloutcommunity, #fo4 wholesome, #fo4 headcanon, #fo4 hancock, #john hancock, #hancock, #fo4 nick valentine, #this is so random, #random ideas, #please what is this mess, #songs, #this is me, #this is my contribution to the community, #greatest showman
9 notes · See All
ma-sulevinPhoto

I was tagged a while ago by both @a-shakespearean-in-paris​ and @thevikingwoman​ to share my fics for quarantine reading recommendations.

So, here we are, broken down by fandom:

#alistair theirin, #cullen rutherford, #kaidan alenko, #harry carlyle, #reyes vidal, #james vega, #john hancock, #sharky boshaw, #staci pratt, #this isn't even everything I have on ao3, #I can keep you entertained for a long time lmao
16 notes · See All
Next Page