This stand has one of my favorite designs in all of Part 5. I love the horror-esque vibe it has and it’s power is truly terrifying. Notorious B.I.G was literally created just so Trish could have an enemy to defeat in her stand’s debut (per Araki, who said that he actually had more fun drawing the user Carne than the stand), and still ended up being one of the most intense arcs in all of part 5. This was a really fun one to draw for me.

Kakyoin does not like children, but he would be a good dad 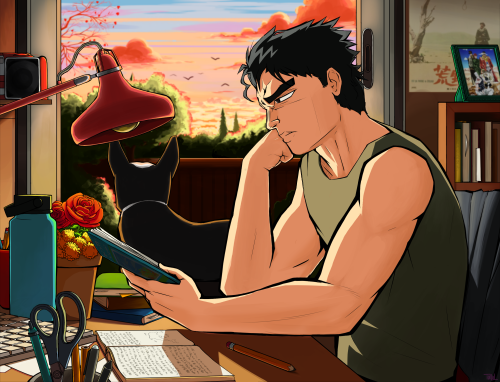 Gotta get it all out of my system
Best Jojo ship 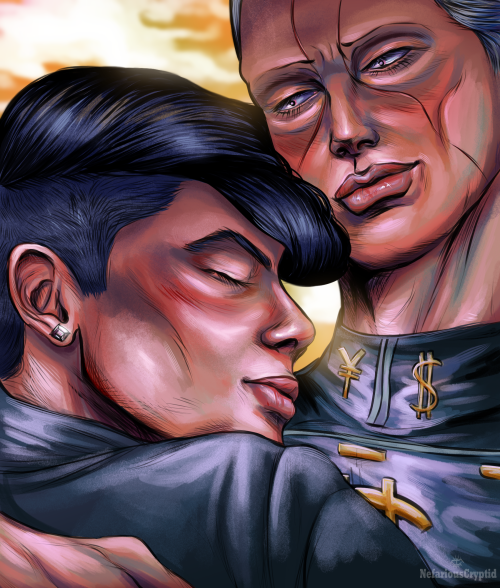 This stand is about as OP as it gets when it comes to mastery of the atmosphere and weather phenomena. From making it rain poison dart frogs from the Amazon basin, to increasing the oxygen in a certain area to lethal levels, Weather Report has some of the coolest usages of a relatively “cliché” ability. Definitely one of my favorite stands, and DEFINITELY one of my favorite pieces I have done.

Also the “sunlight” animation is literally just an Instagram filter.

This stand is SO misunderstood and people hate on it beause of these misconceptions surrounding it. Diver Down has various abilities:

1) The ability to store the kinetic energy of his kicks and punches in any surface for later release .

2) Reconstruction: Diver Down can “dive” into anything (this is not like other stands who simply phase through stuff) and reconstruct its inner structure. It can also pull solid objects with it through walls (We see that other stands can’t do that with Star Platinum in Part 3). Diver down can also use this ability to dive into people and damage their organs, rearrange their bone structure, implant objects into people, protect people from massive damage and even replace lost limbs while he is in them.

Diver Down is one of the coolest stands and I feel more people would agree if they actually understood how it works.

Have some Giorno because I keep thinking about this golden boy

Dio is a dilf, change my mind. Ref used

Anonymous asked: Hey so i am the one that asked for the Hucow reader (reverse thing) and first of all thank you for answering me♡ I wouldn’t really mind if there was nsfw. I leave the whole writing to you do whatever u like. I’m pretty sure it will turn out great one way or another~

:3c this was a fun one to write, I just did Jonathan and Joseph for this one