lol the next part is where i reveal kaizen’s family (CHOSEN BC AESTHETICS IM SORRY, BUT KAGAKURO IS STILL MY OTP JDFNJSJFFNJ)

a clearer look at kai’s design

note: kaizen was still tohru when i made this-

for the abo thing, how else would kuroko have kids bc fem kuroko belongs to fem kagami >:)

AND NOW FOR THEIR GROUP PHOTO

okay so my headcanons so far:

-if abo is applicable, she’s the alpha female who’ll become the Empress of Akashi Corp. one day lmao

-very into gore and power dynamics like her father, but as emo as her dear mother (despite kuroko’s insistence that he’s a male, since he birthed her, he’s technically her mom so seika doesn’t really care)

-also, kaizen basically babysits her on a daily basis bc yOU HAVE SEEN BOKUSHI’S SCISSORS SCENES RIGHT?? IMAGINE IF THAT WERE A PERSON’S ACTUAL PERSONALITY

-i think kise rubbed of some of his sparkles on her, and kuroko is blinded by his daughter on a daily basis (also kuroko’s surname is akashi in the documents but he’s kuroko  tetsuya everywhere else)

- if abo is applicable, he’s the only omega child and papa is in his most protective father mode with him (in contrast to his rivalry with his daughter to almost everything -they also fight for kuroko’s attention every day lol)

-pretty much kuroko with akashi features sans eyes BUT when kuroko is more monotone, neutral and as masculine as an omega can be, kai is way more expressive, easily embarrassed, and basically a tsundere??

-he used to play basketball with his family when he was a kid, but he wasn’t interested in joining an actual team and devotes his time to the arts (animatics, webtoons and fanarts galore)

-he’s still somewhat a basketball fan tho, just not a player  (papa and chichiue are still proud)

-he’s the youngest by a grand 10 years from his older siblings (the pic says otherwise, i know) and probably born on april 1st or smth bc nobody believed kuroko when he said he was having third kid at his age lmao)

-he’s the wild card of the family-

-like legit, in the abo, he was the one who wore traditionally fem clothes so everybody thought he was going to be another omega but then boom growth spurt and he’s an alpha ;-;

NOTE: yeah having akakuro as parents lead to a very stiff childhood, but rest assured, that’s just the parents’ personality and they still spoil them in their own way)

also yeah, they refer to them as their current closeness would have it:

the ‘papa’ thing between akashi and kai indicates their closeness, while he calls kuroko ‘chichiue’ because well, their similar personalities don’t really convey their affection for one another so yeah

yuki just calls them both dad so it’s pretty confusing or daddy/mommy for distinction but the unholiness to the couple is very apparent . He’s pretty neutral when it comes to favoritism (he slightly prefers kuroko  over akashi tho)

SO THAT’S IT FOR NOW, AND THIS IS HONESTLY MY STRESS RELIEF NOW SO YEAH

Yes, I drew a picture for a fictional ship to celebrate a fandom day. Yes, I know it’s 2020. 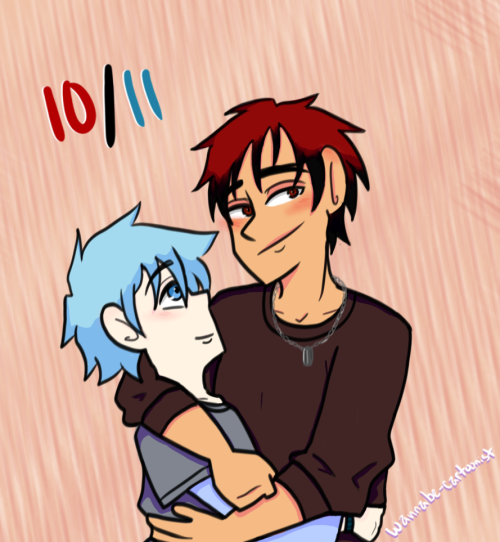 #kuroko no basket, #Kuroko's Basketball, #kuroko tetsuya, #kagami taiga, #kagakuro, #my art, #this was done really quickly so some stuff looks a little off, #kuroko is on a box, #don't think about it too much
25 notes · See All
lazydork0507Text

Idk what to write other than: 🥺Kuroko. Referenced from TXT Can’t You See Me?

title: hold me tight or don’t

synopsis: Kagami wasn’t Kuroko’s first heartbreak, but he was definitely the worst. They were young, dumb and carefree in high school, and the future seemed so distant, so out of reach still - at least for Kuroko. In hindsight, he could swear that Kagami sometimes seemed like he knew it would end like this, with a hasty goodbye at the airport, one last kiss and then years of radio silence.

Four years with the Lakers would change a person, except that Kagami’s still the same goofy boy that Kuroko grew to love and happened to somewhat fall for. Because of course he came back, unprompted and unannounced, standing at his front door. At their front door, because Kagami wasn’t Kuroko’s first heartbreak, but he was the one that got away, and Kuroko just can’t stay away from those who hurt him.

#ask and i shall answer, #geometricalien, #i started writing this. stopped to watch brother bear, #THEN stopped brother bear to finish writing this and now i'm not sure i'll finish watching, #enjoy asdgh i definitely did, #aokagakuro, #kagakuro, #aokuro, #because of course its aomine who kuroko got back together with, #i pulled an uno reverse card on the typical aokagakuro dynamic which is aomine gets estranged from them both and kagakuro gets him back, #now its kagami with the distance, #your daily dose of angst yeehaw
4 notes · See All
kiirosenpaiText

What do you mean it’s not called Kuroko no Harem???

I got inspired by @moulimelo​ ‘s super cute KagaKuro outing pic that I wanted to make my own little fem version. 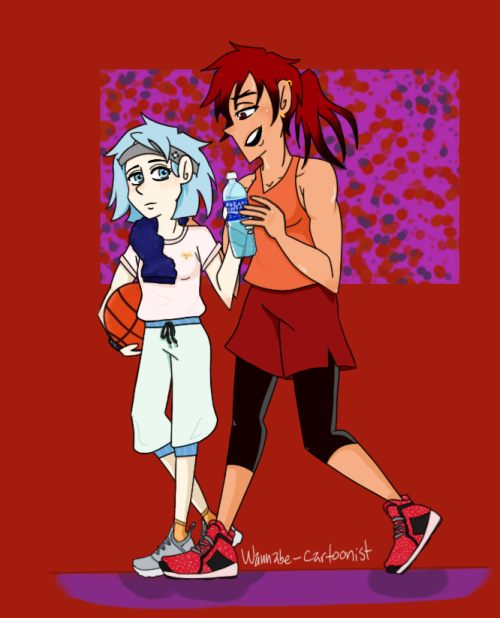 For this one, I’m doing both friendship and relationship headcanons because Kuroko deserves his harem.

Thanks @wingroad for the idea~

I can’t see the difference???

Winter, for Kagami, meant going to the roof of the building to watch the few stars the could be seen in Tokyo’s sky. When Kuroko and Aomine decided to join him, they soon realized that only one of them would be able to sit next to Kagami, as there was only one beach chair to spare.

This is part of the Summerfest Bingo Event from @sloaners​ tumblr
The prompt for this one was: Fighting over the last beach chair

Card under the cut! 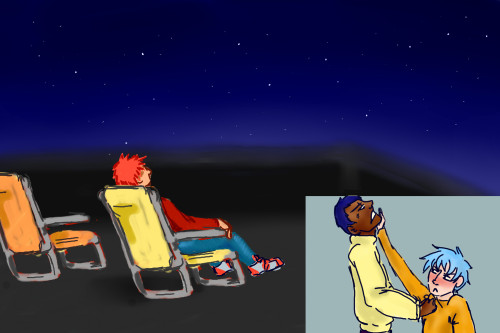 Ship dynamics that are like “Yes, I am the most handsome, badass of them all. But have you met my cinnamon roll boyfriend? Ah yes, that one. He will fuck you up.” Are always worth shipping.

sketch of these cuties!! bonus: 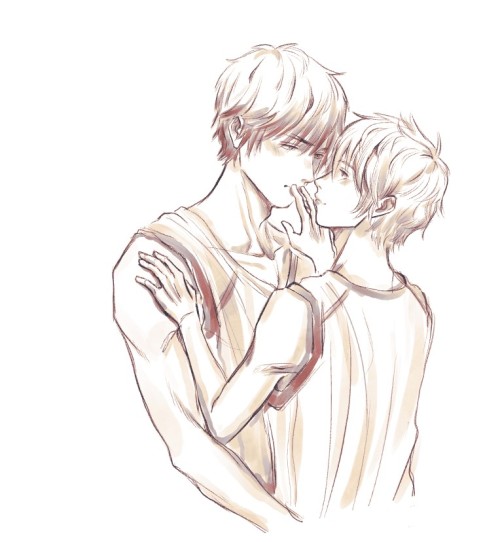 #kagakuro, #kuroko tetsuya, #kagami taiga, #kuroko no basuke, #knb, #i love sports but gay so much, #and characters that play sports is a good excuse to draw dem muscles
109 notes · See All
izukillme-movedText

#ceru speaks, #kpop, #anime, #kagakuro, #look i dont hate kgkr but do i like it??? naaaah man i like them as brotp only xD
20 notes · See All
bakugoukatsuki-risingLink
A Piece of Your Heart - Kurokonobaka - Kuroko no Basuke | Kuroko's Basketball [Archive of Our Own]https://archiveofourown.org/works/15857886

Hello yes I am shamelessly plugging my KnB AoKagaKuro fic that’s been a long time coming.

I started working on this in September of 2018 and left it all this time, but I have returned to it and just released Chapter 5!

I would love if you beautiful babes gave it a read and let me know your thoughts!!

You’re gonna make a fic?? That’s awesome! Hehe I may not be that deep in kagakuro/knb right now but I still love looooove that pair and series! (And I’m still hoping for more seasons ahhh)