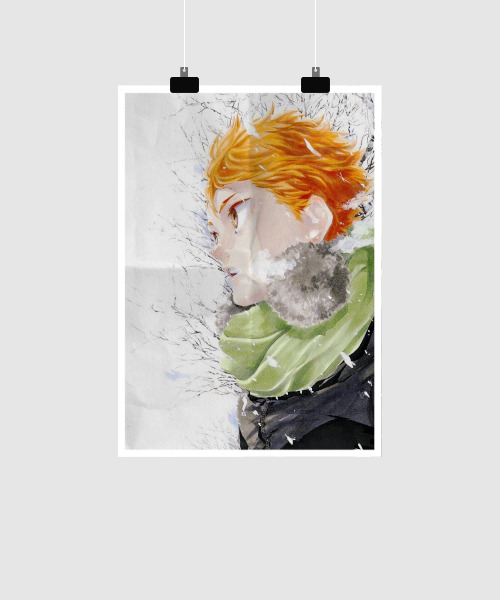 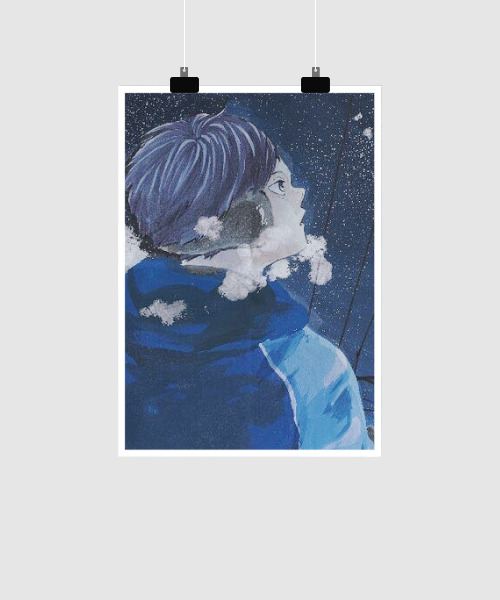 If they are being completely honest, the air isn’t yet warm enough to justify it. Sure, it feels a little better in the sun, and it will only go better from there, but the grass is still wet from last night, their noses still itch when they breathe too hard, and their fingers still hurt when they don’t move.

They’re being very deliberately dishonest, is the point. Because there’s only two days left before classes start again, and then Kageyama has family obligations, which means that they won’t see each other before first practice, and, well. It’s going to be back to the way it always is, once they start practice again. Official practice, that is. It’s probably going to be back to the way it is in, like, ten minutes from there, when they remember that they are not supposed to let their guard down in front of each other. But for now, right now, they’re tired, and satisfied, and happy, and the idea doesn’t seem too ridiculous.

So Kageyama sighs, and lets himself be pulled down by Hinata’s weight, only letting go of his hand to avoid impacting the wet ground at full force. He stretches his arms, enjoying the slight soreness left by exercise. Above them, the sky is too big and too blue and the whole world can just disappear on the edges. Yeah. It’s dumb, and cold, and over indulgent, but then, Hinata lets out a pleased sigh and snuggles against his side like a cat, so, he can take it.

“Any of us catch a cold and everyone is going to give us shit about it.”

“Keep your scarf if you want,” Hinata mumbles, and his tone has Kageyama raising an eyebrow.

“Are you already falling asleep?”

Well. The lack of answer is answer enough.

so apparently I’m still doing those: send me a ship and a prompt word and I’ll write you a 3-sentence fic

#kagehina, #haikyuu, #I wanted to write something else but then I realized, #I do not have their voice at all, #I need to rewatch the episodes, #or write 45 fanfics, #or both, #anyway have some softness, #cancelledkirby69
5 notes · See All
loveeijun15Text

I’m in love on how Hinata goes around and saying I’m here to everyone.

Mint and Cinnamon
by the pandemic17

I only hope that he’ll be patient with me.

Isn’t he already? He holds me as I hold him, explains what I don’t understand, and knows what I do understand. We nearly always know what the other is thinking… Maybe it won’t be as difficult as I fear.

Whisper of the Heart and Haikyuu!!, both being feel-good stories about personal growth with a foundation of interpersonal support and self-care, how very special places in my heart. Whisper of the Heart’s storyline of two people inspiring each other to pursue and improve in their crafts and Haikyuu!!’s focus on human connection and relationships, specifically revolving around Hinata and Kageyama’s relationship, led me to realize that there are A LOT of parallels between Shizuku & Hinata, and Seiji & Kageyama.

Shizuku and Hinata are the protagonists of their respective stories and therefore undergo the most growth. Shizuku sets a goal for herself to finish her novel by the time Seiji returns from Italy, and Hinata aspires to be good enough to beat Kageyama, the “King of the Court”, declaring that even if it takes ten or twenty years, he will do it.

Seiji is very good at making violins and has high aspirations that will take him elsewhere on the globe to improve. Kageyama is hailed as being a prodigy setter and has a strong drive to become the best there is. (I think the moment these parallels clicked for me was when I realized that their aspirations brought the both of them to Italy: Seiji to be an apprentice violin maker in Cremona, Kageyama playing for Ali Roma). They have worked hard for what they love and their goals have been set for a long time, in contrast to Shizuku and Hinata. Shizuku and Hinata acknowledge they need to catch up; Shizuku says “it must be nice to know what you want to do with your life. Me, I just go from one day to the next” and Hinata, having started playing volleyball later than Kageyama (and playing in a proper team even later), learns along the way what he wants to do and HOW best to do it

Seiji and Kageyama start farther ahead in their personal progress but give Shizuku and Hinata the inspiration and the means to start theirs. They create a place for them to use their talents – Kageyama using his precise setting to make use of Hinata’s incredible speed/jump height/overall natural athleticism, Seiji being a part of Shizuku’s connection to Baron and part of her inspiration to write. They open up their viewpoints to a world they could have never seen without them.

And these relationships spark passion and drive and inspiration between every individual. Kageyama makes Hinata promise that he will meet him at the world stage one day. Long before Shizuku even noticed him, Seiji admired her talents and checked out dozens of library books hoping she would see his name on the cards. They excel on their own but with Shizuku and Hinata there, they can become even greater.

These relationships are about having someone around who makes you want to be better, who makes you want to dig deep and learn about yourself and go through the hard work of improving without the glamour and glory. I got into it briefly with this post but there’s a whole lot more i want to talk about (especially after seeing this beautiful piece of fanart by hazwqste !)

i got carried away and this got super long so i’ll be going into this in more depth (and including haikyuu manga spoilers!) under the cut:

#whisper of the heart, #haikyuu!!, #kagehina, #ghibli, #hq!!, #hq m, #as long as i'm here, #mine, #janina reads hq!!, #there are SO MANY more tiny little similarities that i wanted to include but didnt because this would end up getting way too long, #love is stored in the volleyball, #food becomes muscle
13 notes · See All
ladysunamireadsText

As if dealing with a serious sports injury isn’t enough, Kageyama also falls ill.
Ukai is prepared to fight anyone and everyone for this kid.

Author’s note: I miss the 7/11 store near my old school and I remembered this idea (Hina in braces y e s). Anyway this will prolly be angsty (?) who knows. I just miss kghn, anyway, enjoy the shit I made

voting can be done over on my instagram, @ryus.sketchbook!

A redraw of my most popular tiktok video hehe 🧡

I tell people my haikyuu OTP is bokuaka but honestly

✨how the hell am i supposed to pick✨

One day im crying over iwaoi, kuroken the next, then matsuhana then the same day tsukiyama, the next day sakuatsu and more and then the cycle repeats itself, HOW DO I PICK???

a long night in the canyon
by memitims

“he is very special to you,” ushijima says. it’s a statement, not a question.

hello demon children. would anyone like to be in a group chat to talk about anime and be friends? reply to this post and i’ll make one :)

why you look so damn sleepy

Hello Darling, after reading this I was gonna match you with Hinata but then I saw that you were a Gemini and because he was born on the cups he could either be a Gemini or a Cancer but the Haikyuu Wiki states that his birthday is on June 21 which is the start of Cancer season. I’m getting carried away but if he was a Gemini, you and him would be a good pair but if he was a Cancer it would be a good match.

So after going back and forth as to pairing you with Hinata, I’m gonna pair you up with timeskip Hinata.

So timeskip Hinata is 5′7 so you guys are the perfect height for each other. Now no one is gonna me that Hinata would not date POC. Come one he plays for Brazil, he loves representation so there is nothing wrong with you being Black, and though he doesn’t know much about cultures so please educate him on that. Now he’s passionate about volleyball so when you told him that you love to draw, write stories, edit. He also watches anime so you two will be watching Anime together. This sunshine of a man loves drinking tea with you in the morning, and He’ll try to take you on a morning run and bribe you with getting tea after that.

Now since you stop being calm and composed once you get to know and trust the person you open up more,,,,honestly same,,,so once you open up to him your relationship will be wonderful.

So if this is bad im sorry, despite waking up early I still have a headache so matchups make take some time or not depending. I might also stay up all night doing the match ups I have then do the headcanons of Haikyuu and My Hero Academia.

hinata and his best friends in the entire world :-] 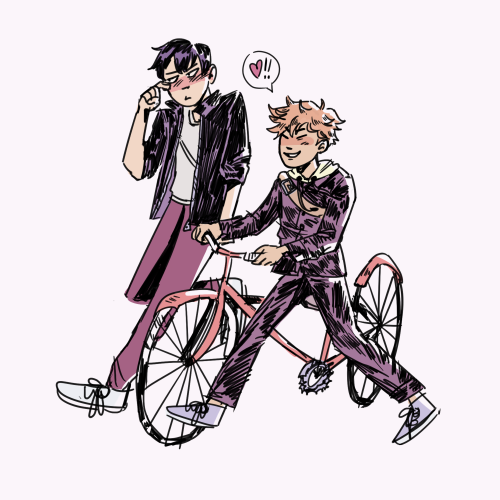 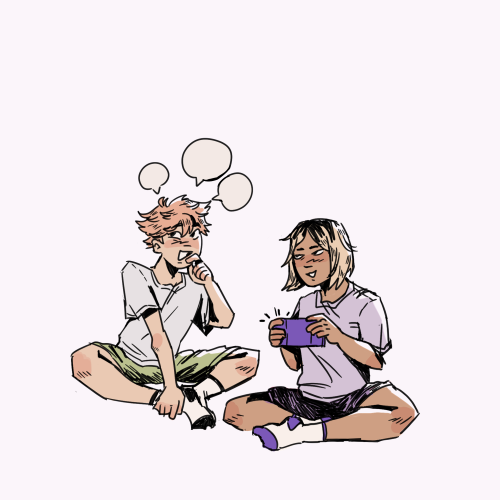 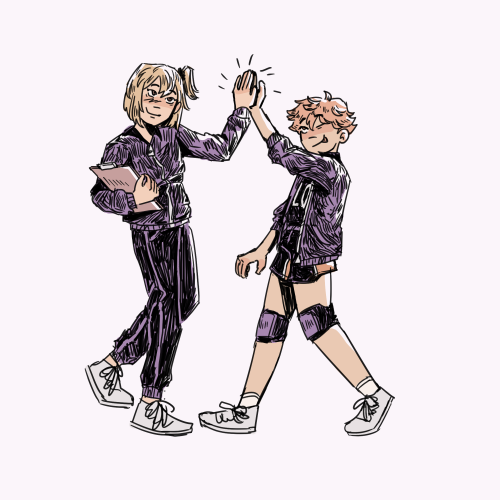 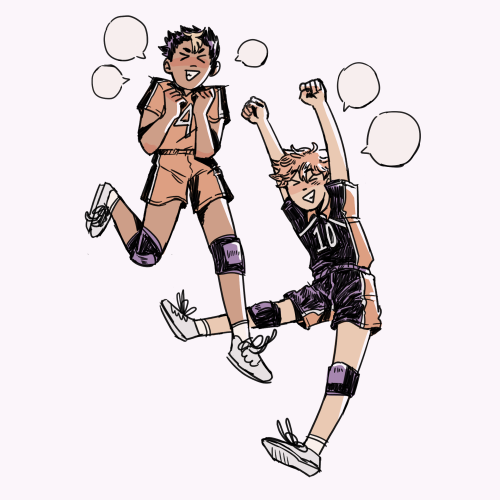