It was fun to draw Kagome. I miss her I hope she appears in Yashahime, and I really hope she’s not dead!

With each episode of Yashahime I grow to adore Moroha more and more and it’s getting to the point where if I so much as see a pic of the little gremlin I start to fawn over how amazing this child is.

Moroha is the one who owns this old crone’s heart. She is my child and I’d literally tear a demon to shreds if she asked me to for real. Kagome and Inuyasha did the world a favor and gave us this beautiful feral, adorable child known as Moroha.

the comparison between my two favorite ships ah my heart 💓 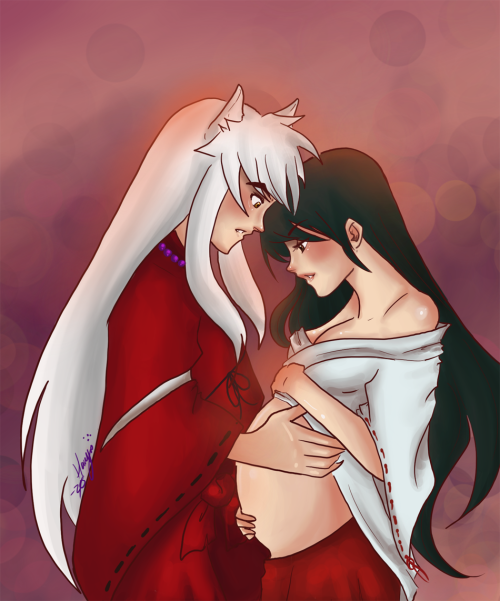 No one understood my love for Kohaku back then, but look at my mans now. Looking like a whole MEAL! 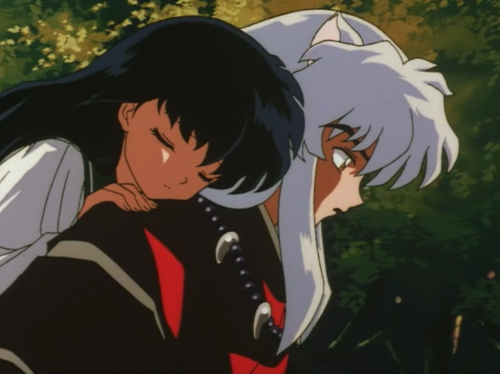 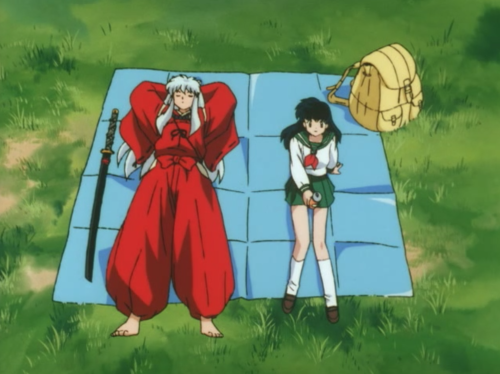 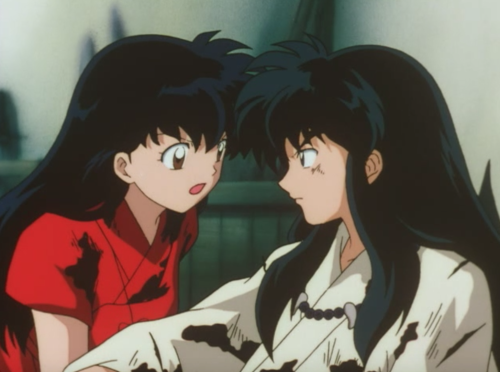 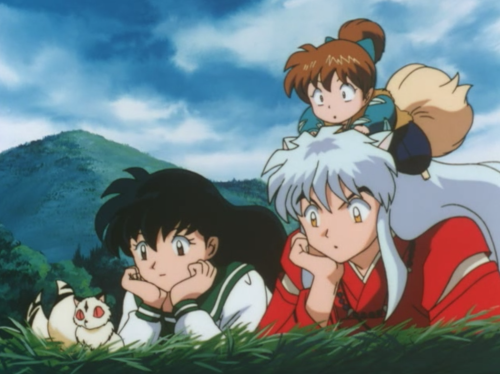 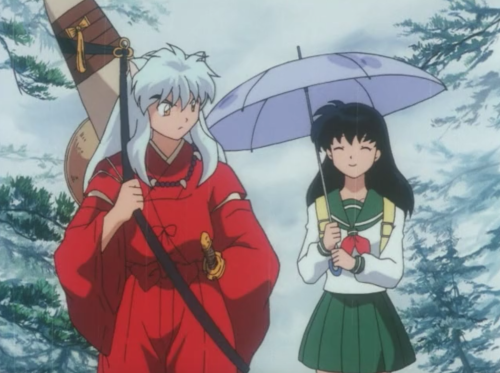 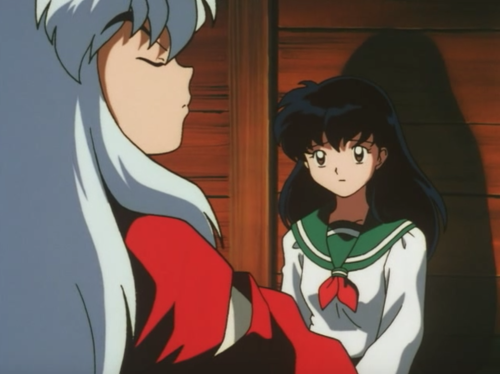 Kagome woke up early to get ready for her date. She did her hair and picked out her best bathing suit. Her mom helped her put on waterproof makeup and bought her a new towel and some scuba gear. This was going to be the greatest date of all time.

Once she was ready, kagome put on her cover dress and walked to the beach. There she found a gift with her name on it under a yellow umbrella. The tag had a note written on it that read: “my dear kagome, this reminded me of you. I hope you like it.”

She opened the box and found a beautiful pearl necklace. She put it on and went into the ocean. When the water was up to her chest, kagome put on her scuba gear and dived under the waves. She made it half way down when her boyfriend finally appeared.

“Bahahahaha hey kag0me!! Are you ready for the best day ever!!??” The yellow sponge yelled as he emerged from the dark water.

“Yes hello SpongeBob!! I’m so excited!!” She yelled back.

They swam to eachother and hugged before swimming down to bikini bottom. They went to the krusty krab for lunch where SpongeBob made her the best Krabby Patty she’s ever had.

“Mm this is really good. Did u make it different this time?” She asked.

“Bahahaha! It was made special with extra love!” He responded, looking at her lovingly. “did you change your hair?  It’s great!”

“You like it? I was worried it would get messed up down here but it’s actually held up pretty well.”

Kagome giggled and finished her meal. Then they went to the beach and had a great time doing beach things. But the day was ruined when inuyasha showed up and started yelling and trying to pull kagome away.

“I can’t believe you kagome! You were supposed to be back by now but when I came to get you they tell me youre at the bottom of the ocean with some weak sponge!” He pushed random fish out of the way as kagome struggled out of his grasp.

“Stop it inuyasha! It’s not like you own me! I can do what I want so just go away already!” She turned to leave but he grabbed her arm again. “inuyasha.

"Don’t. Kagome can’t you see I’m just looking out for ya. We need you back in my time. There’s no time for this everyone’s waiting. Let’s g go!”

“Inuyashaaaaa” she cleaned her fists and he could tell she was getting irritated but he still didn’t back down.

“Come on, kagome, don’t be like this. You’re the one that lied just so you could go out with whatever this is”

“Hi I’m SpongeBob.” The sponge stuck his hand out in greeting but inuyasha ignored him.

“You can’t really like this guy right?” Inuyasha asked

Inuyasha fell sending sand flying everywhere. SpongeBob went flying with it and landed next to kagome at the edge of the water.

“I know what will cheer you up!” He said and took kagome’s hand.

Inuyasha watched sadly as they left the beach. SpongeBob brought his girlfriend back to his house and set up his sound system. They danced to the top 20 under the sea shanties. After the first few songs inuyasha appeared again. This time he challenged SpongeBob to a fight.

They fight with no weapons and inuyasha won easily. SpongeBob’s hands were just too soft to actually hurt a powerful half demon like inuyasha. Now that inuyasha has asserted his dominance over the sponge, kagome realized that she was being silly to think a sea sponge could make her happy.

“Oh inuyasha I’m so sorry I ever doubted you!” She ran up and hugged the half demon. “let’s go home!”

“Gladly” inuyasha said as she climbed on his back.

“Oh wait. Hold on a sec.” She walked over to SpongeBob who was laying on the ground in pain. “I’m sorry SpongeBob your a really nice guy but I’m afraid I’m breaking up with you”

SpongeBob started crying as kagome got on inuyasha’s back. Inuyasha jumped them both out of the ocean and went back to the higurashi shrine.

Read it on FFN HERE 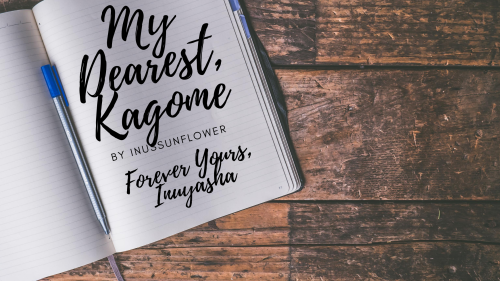 To be honest, I like you just the way you are.

Summary: Inuyasha is a troubled UFC fighter, who’s quickly found comfort in the lap of luxury. However, his temper had landed him in trouble numerous times already in his short career. Lately, his publicist Miroku has had enough of his self-destructive ways. Exasperated, Miroku has decided it’s best for Inuyasha to enter a public relationship, in an attempt to soften his public image. Enter Kagome Higurashi, a barista who works at a cafe a few blocks away from Inuyasha’s flashy Manhattan apartment. Tempers and frustrations fly as Kagome and Inuyasha struggle in adjusting to a loveless relationship, but will time change that?
Story is rated E for graphic depictions of violence, and blood as well as references and chapters referring to alcoholism/addiction, depression and suicidal thoughts and frequent bad language/cursing. Injuries in the fights of this story will be serious most of the time. Read at your own discretion.

Chapter Summary: Inuyasha and Kagome get into a heated discussion of what happened the night before. Miroku drops the bomb that they’re due to make an appearance in a youtube video. Inuyasha tries to make amends.