Not me simping over lena cuz it’s her birthday.. what are you talking about?

When was the last time she’d been kissed?

The last time was five years ago, when she’d first realized that she loved Lena; when everything else became background noise and she was all Kara wanted, no one else. When she thought it was a love just between friends, only to discover that it was so much more.

Kara’s waited five years for this. For Lena’s lips on hers. And when it finally happens, she misses it.

OR Kara passes out during their first kiss. And their second kiss. And the third. First, they think it’s sensory overload. Then, subspace. They come to know it’s a combination of both.

@amnesia-yourself No words could describe how amazing this fic is. Wow. So emotional. Thank you for this! ❤️

i’m working on my library au so here are some things i hc about deaf!lena and kara

Yo, so, a few people wanted me to write the Blind!Kara idea, so I did. Here’s the first chapter, you can take a look if you want, I guess.

#I wrote the thing, #there will be a lot of fluff in later chapters, #it’s a bit of a mess, #but it’s fine, #supercorp endgame, #i promise, #supergirl, #supercorp, #lena luthor, #kara danvers
4 notes · See All
sapphic-shipperText

So Lena said that Kara broke her heart. And Kara said betraying and hurting Lena was one of the biggest mistakes she’d ever made, and also said that Lena hurt her in every way imaginable. So what I’m hearing is that not only did Lena break Kara’s heart back, but worse than just about anyone else ever has. Like listen homegirl was a lil sad after MonHell got yeeted to space and came back with a wife, but she did not spend an entire season moping and crying and acting OOC about it. She did not spend a whole episode altering time because of it. I believe Lena Luthor was the cause of Kara’s most painful heartbreak ever

[after a bad day]

Lena: I mean, touching your hair would make me feel a little better. 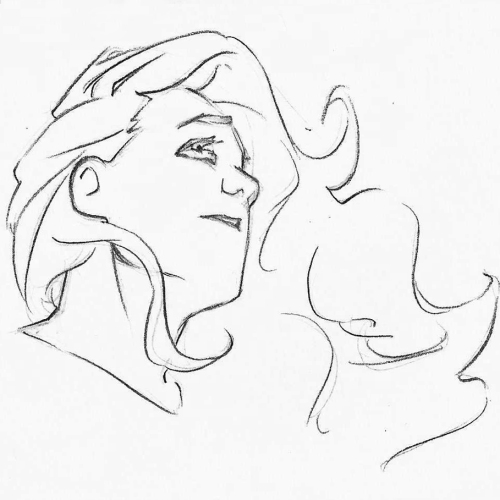 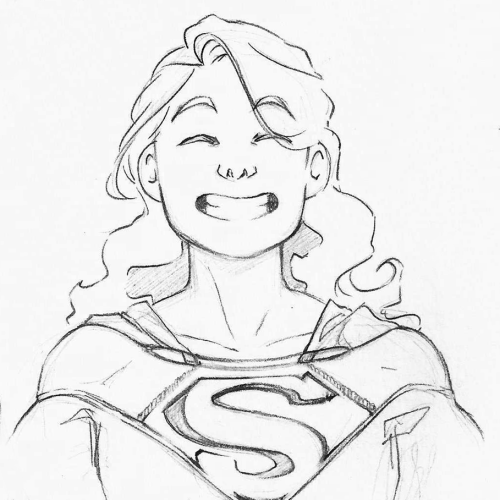 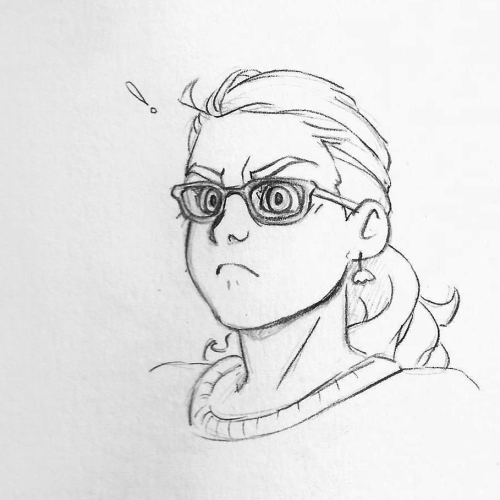 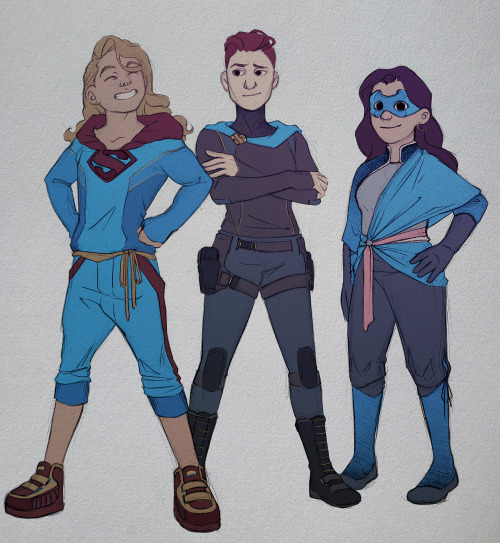 #someone needs to start dressing hero characters without the baggage of century old designs for the love of god, #supergirl, #cw supergirl, #kara danvers, #alex danvers, #nia nal, #what if kara was something other than superman lite, #what if instead of blue robin hood alex maintained her practical stealth aesthetic while also subtly reflecting her sister, #what if we put nia in something that looks like a person might actually wear dlskajfkldwsa, #anyway, #fan art
452 notes · See All
thesparklingblueText

“Lena did as asked, tossing her t-shirt to the side and Kara was instantly leaning forward, her tongue reaching out and licking Lena’s nipple before taking it in her mouth. “God,” Lena gasped, her chin tipping up, her hands reaching for Kara and gripping her shoulder and arm.

Kara’s tongue swirled and flicked, and Lena swallowed thickly, her back arching slightly under the relentless attention. “I will never leave these,” Kara murmured after a moment against Lena’s skin and Lena snorted. Kara looked up, startled by the sound and stammered. “You. I will never leave you.””

Lena and Kara are a happily married couple who enjoy making each other happy.

This right here is one of the biggest reasons why Supercorp is real. There was absolutely no reason to have Red Daughter obsess over Lena if their relationship was never meant to be more than platonic. They could have easily only used Alex as fixation point because she is Kara’s SISTER and has the strongest connection to her. But instead they chose to focus on Lena over and over again and then have Red Daughter stare at her almost like Kara did when she first met Lena in 2x01. Choices. Those are all choices.

(I just want to say that even though I have a different view point, I completely understand where so many fans of the show are coming from when it comes to Kara’s anger issues.)

For months I’ve seen posts about how Supergirl doesn’t let Kara express her anger the way she use to in season one anymore, and for a while it really confused me. Because the way I saw it Kara did get angry and a lot. I didn’t even think she was ooc. But I do agree that they need to show her getting angry like she use to in season one. Here’s why.

In the first episode of season five Kara admitted the mistake she made and told Lena the real reason she didn’t tell her the truth, and then after things fell apart between them she got self righteous. She got hurt after admitting that she was wrong, that’s why She didn’t want to be in the wrong so she put it all on Lena.

But this is exactly why Kara needs to express her anger the way she use to in season one. Intentionally or not she has turned into this person who doesn’t let her feelings out. She keeps her anger and frustration locked inside until it builds up and then she takes it out on the people close to her, mostly Lena.

That’s why the way she acted in second half of season five felt completely in character to me. But that doesn’t make it right. Just because people act this way doesn’t mean they should. She is hurting herself, hurting the people around her and damaging her relationship with them all because she is not expressing and hence not handling her anger issues.

The girl has a lot of pent up anger inside her, she always had and it’s affecting her badly. At this point she can only make positive changes in herself by handling her anger issues. And to do that she needs to express her anger the way she use to in season one.

Eliza Danvers arrives a day after Alex came crashing into the apartment, and Lena has never been so on edge. Her nerves are shot as she tidies things in the apartment she knows she’s already been over twice before. She had given up on work hours ago because she knew Eliza Danvers was going to be critical of a Luthor; she has to be. Lena’s rearranging a pile of Catco magazines for the third time when Kara drops onto the balcony, sopping wet from the February rain.

“Don’t!” Lena shouts as the blonde is about to step into the apartment. A deep frown graces Kara’s face in question. “I just cleaned, I don’t need your footprints everywhere."

Lena doesn’t see Kara’s look of confusion at the CEO’s behaviour, but simply floats into the apartment, trying to avoid any stray water from dropping. Lena finishes sorting the magazines in order by date before she turns back to the kitchen, fixing herself a scotch because it’s all that’s going to help her get through an evening with Kara’s adoptive mother. They had met before at Thanksgiving, but that was a different universe, in a different time when she dated James, and even then it wasn’t the most amicable of discussions. Kara emerges in jeans and a crew sweater that shows off strong shoulders far too well.

"You know I can hear how erratic your heartbeat is from across the city. Are you ok?” Kara’s concern is evident as she leans against the counter.

“And she loves you,” Kara reassures.

“Eliza is no different from the Eliza you’ve met on our earth. The only difference is well…"

#supergirl, #supercorp, #lena luthor, #kara danvers, #the ripple effect, #i lost a lot of sleep over this, #give it a go, #lena luthor needs a hug
9 notes · See All
spookypotatohText

have i ever told you how much i freaking love dark supercorp? like,, the emotions when they’re ruining the world together oh my god i’m obsessed with it

Halloween was supposed to be for scary movies and sugar, but this year there was Kara. This year everything was changing. Mom had strictly outlawed scary movies. Dad was distracted and too busy to carve pumpkins…

“Do it with Kara,” He was already halfway out the door, headed back to the lab. “you can teach her what Halloween’s about.” At least they didn’t expect her to take Kara trick-or-treating; her friends would never let her live that down.

“So… we carve the fruit?” Kara peered at her pumpkin over the rims of her glasses, a little puzzled but receptive to the idea.

“It’s not a fruit.” Alex tried not to sound too long-suffering.

“Fruits have seeds, and the pumpkin has seeds, I can see them inside-”

“Ok, yes, but a pumpkin is a gourd, it’s different.” She was mid eye roll when an idea struck her. “You used your x-ray vision on the pumpkin?”

First day of school for Liran, Luna and Dawn. One of them finds the love of their life but at what cost?

|| Hey you guys, I am looking for longterm roleplay partners. I am quite the experienced player for 8 years now, literate, para/ multi-para and a fan of established story building.

I would be happy to hear from you!