Tan: You can say “have a nice day” without a problem, but you can’t say “enjoy the next 24 hours” without sounding vaguely threatening.

Karamo: Thanks! It’s a facade!

Bobby: I will my parents still loved me.

Antoni: Thanks, I use both my nostrils.

I had a dream that all of the Fab 5 were left by their partners on the same day. Bobby just got a normal divorce while Karamo videocalled his husband and said “now I know what your face remind me of: a zit” and then everyone cried.

ok I gotta say…the scene in ep3 where the guy starts crying about his decreased dad was a lot less touching after karamo walked in with that guys maga hat. like… I s2g, can these people get any worse?

oh yeah, there’s also that part where he met his wife in a club and slapped her ass. I mean that’s their relationship, if she’s okay with that, whatever, not my business. but just…it’s just one more shit ingredient in the horrendous pot of garbage they’re cooking up. I pity the poor daughters in that household.

ok so I just arrived at ep 3 of queer eye and they’re getting pulled over. and like, I’ve heard before that ppl say how not fucking funny that prank is and I could 100% understand that, cause racism, police brutality and just straight up murder. yanno, no further questions from me.

but seeing it..like. you can tell that that is not a guy being a lil nervous and unsure as to why he’s being pulled over, that is a man fearing for his goddamn life. because that is the reality of his life. that his skin colour makes him a target in the eyes of the police. that something as little as being pulled over, comes so damn close to a death sentence. and you can see that. everyone in the car is worried for him, Jonathan is filming it (and the fact that that is even fucking necessary! I-), but Karamo’s face is just sheer fucking terror.

Like…that is the face I pull when I have flashbacks, that is a reflection of what it feels like when everything inside of me is screaming in sheer agony and hysterics.

it’s not a fucking funny prank, it’s not a joke; you’re toying with someone’s life, and I want to burn every person that thinks like that to the fckin ground.

if you were to look up the definition of “cheeky bastard” in the dictionary, it would show you a picture of tan france.

I hate that whenever karamo is having a conversation with the hero like they get interrupted by the others walking into it, like, LET THEM HAVE SPACE, there are so many more deep things he could say and talk more and like I appreciate every single one of the fav 5 and I’m sure it’s not up to them but production who decides that, but like LET KARAMO TALK. LET THEM HAVE A CONVERSATION. Cause I can see it when the rest walk in cheerfully that karamo is like his face just goes DAMN IF ONLY I HAD ONE MORE MINUTE

Karamo Brown appreciation post for his incredible t-shirts this season 💖 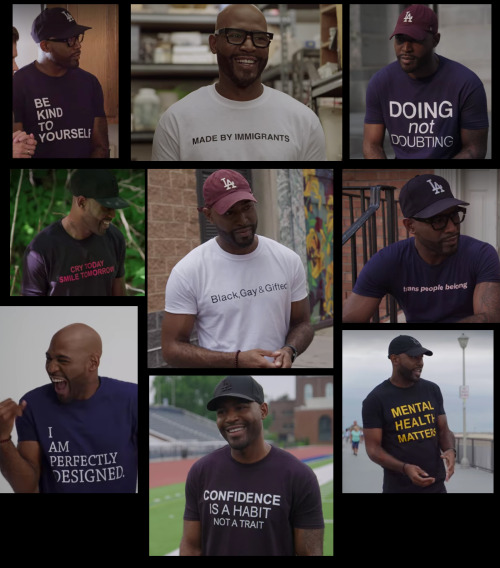