I’m kind of obsessed with Tenma’s hair, so I decided to give him a try 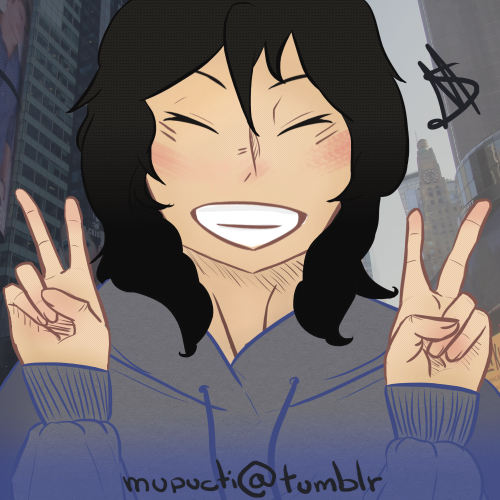 Tsukki : Are you guys that fucking dum- 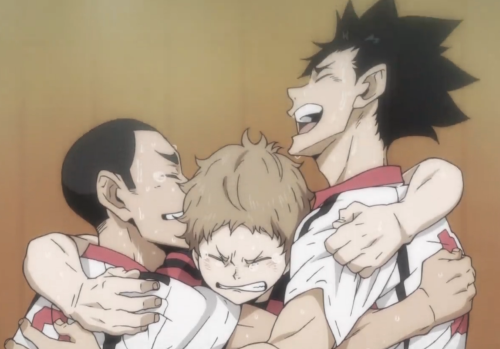 -”Sho, it’s really okay! Kageyama doesn’t have to set for me if he doesn’t want to-”

-Too late, he’s already dragging the setter over to you

-Screams the loudest at your games when you score points

-”Of course! You’re probably better at it, though”

-He used to cheer after each point, but he almost got kicked out and he quieted down

-He thinks its super cool that you’re both pinch servers

-Offers to show you some helpful tips for when you serve

-Whenever your team wins a game, he’s sooo super happy for you and congratulates you until you tell him to stop

-Y/N, baby, I really loved that last server you did! It was so cool! Can you show me?”

-Suddenly he’s excited about you also being a middle blocker

-Goes to whatever games he can, but is super tsundere about it

-”I’m only coming because you told me it’d be fun.”

-”Aw, Kei, I know that you wouldn’t have come unless you really wanted to.”

-Super proud that you’re the wing spiker of your team

-And the captain too?  W o a h  this boi is impressed

-Gives you all the tips he has on helping your team, but also know that you could probably do just fine without them (the tips, not the team)

-Woahh you’re the setter on your team?

-Loves being able to talk with you about volleyball

-A smidge sad that you didn’t tell him earlier tho

-Since Kageyama doesn’t take much of his advice

-Super surprised when he finds out

-He just gets really flustered

-”Y/n, you don’t need to ask me for advice! You’re already as great as you are! Plus, you’re probably better than me…”-

-Goes to your games, and is always so supportive at the end

-Tries to show you how to do the rolling thunder

-You do it in front of your team one day and he is. so. proud

-But then the pride multiplies when he sees you use it in a game, letting your team score the final point

-The people next to him think he’s having a seizure

-If you thought he simped for you before

-You are about to be simped on like never before

-Show you every single trick up his sleeve

-When he goes to your games, he cheers after every point and gives you a bone crushing hug afterwards

-He thinks it’s pretty cool, but doesn’t freak out over it like how the chaos trio™ does

-Admires how great you are, on the court and off

-sorry i dont have much for ennoshita

-Thanks to the power of the managers, you two are able to convince the coaches to let your two teams play against each other

-Since Kiyoko knows about the two of you’s relationship, she gets the coaches of your team and hers to play a practice game together

-Kiyoko promises she’ll take care of the team, and off the two of you run

-You kinda just watch the game from above together while talking

-Except Kiyoko, who is all-powerful and knows all

-feeling tired of always giving and never getting

#this isnt a vent or anything, #haikyuu, #haikyuu angst, #ittetsu takeda, #karasuno
3 notes · See All
and-you-found-meText

Hello everyone, looking to interact with more haikyuu mutuals if possible and see more hq content on my dash ^^ so please rb so I can follow, thank you ♡♡♡

Announcement: We’re trying to make a Haikyuu!! Game on Among Us. If your interested please let me know. As of right now i have a oikawa and Tsukki. Looking for other players… 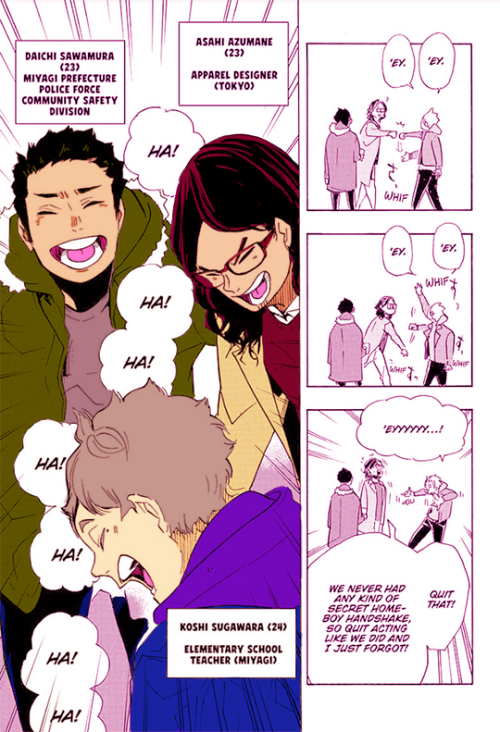 Random chibi haikyuu!! icons I did like a year ago lmao.

I have never related more to anything before.

1 photo of hinata shouyou hitting a spike during a match. in the background, tsukishima kei, asashi azumane, sawamura daichi, tanaka ryuunosuke, and kageyama tobio watch. kindaichi yuutarou (aoba johsai) watches from the other side of the net. 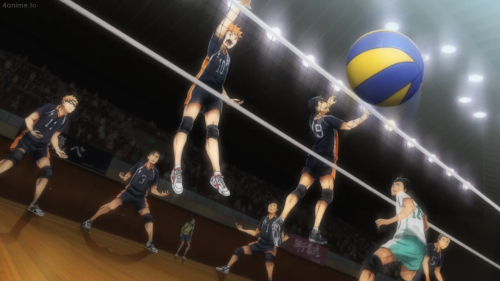 Fuck so i drew ukai in the middle of my art class cause i had nothing to do. I might post it later

#Ryuk not being smart and giving in because of their lack of impulse control, #oh god what the hell have i done, #drawing, #karasuno, #coach ukai, #ukai keishin, #ukai drawing, #haikyuu!!
2 notes · See All
nishinotyersText

suga: tsukki sweetie is that you?

A = Affection (How affectionate are they? How do they show affection?)

B = Best friend (What would they be like as a best friend? How would the friendship start?)

I think he would be the crackhead best friend that talks you into doing all kinds of dumb shit with them. Your friendship probably started with him rushing off somewhere and running into you, then hanging out later.

C = Cuddles (Do they like to cuddle? How would they cuddle?)

OMG. This boy LOVES cuddles! He would probably like to lay on top of you with his head on your chest.

D = Domestic (Do they want to settle down? How are they at cooking and cleaning?)

Eventually, yes he would want to settle down, but it’ll take a while. I think we all know he is shit at cooking and cleaning, so good luck with that.

E = Ending (If they had to break up with their partner, how would they do it?)

I can see this poor boy crying the whole time because he doesn’t want to hurt you, but knows it’s probably inevitable.

F = Fiance(e) (How do they feel about commitment? How quick would they want to get married?)

Hinata would want to get married as soon as possible! He just loves you sooooo much and will do anything to show you that.

G = Gentle (How gentle are they, both physically and emotionally?)

Emotionally, he would act like he’s walking on a fricken minefield, he just doesn’t want to say anything that might hurt you. Now physically, he’s a bit less careful, we’ve already established that he’s very affectionate, so he can get a bit carried away.

H = Hugs (Do they like hugs? How often do they do it? What are their hugs like?)

THIS BOY LOVES HUGS! PROVE ME WRONG! I DARE YOU! Hinata will hug you whenever he can, just so he can feel you. I have a feeling he likes hugs that let him rest his head on your neck.

I think he waits about a month, and then gets excited and decides to just declare it to the world.

J = Jealousy (How jealous do they get? What do they do when they’re jealous?)

65% Jealousy level. When he’s jealous he’ll just wait for the perfect moment to come up and mark his territory.

His kisses are full of passion and excitement. If you want him to calm down he will, but it won’t last very long. He likes to kiss you  on your cheek, while he likes being kissed on his nose.

L = Little ones (How are they around children?)

Having a younger sister growing up, he is definitely a natural when it comes to kids, so children aren’t a problem at all.

M = Morning (How are mornings spent with them?)

You’re going to have to wake this boy up cause he can’t do it himself. He only likes mornings spent with you. He tries making you breakfast, but it always fails.

N = Night (How are nights spent with them?)

Probably trying to get him to bed at a reasonable time so that maybe you won’t have to shake him awake the next morning.

O = Open (When would they start revealing things about themselves? Do they say everything all at once or wait a while to reveal things slowly?)

He would be completely open with you right off the bat. He has no shame sharing his life story with you.

P = Patience (How easily angered are they?)

This precious cinnamon bun has all the patience in the world. Part of it is that he just doesn’t want to have to be mad at you.

Q = Quizzes (How much would they remember about you? Do they remember every little detail you mention in passing, or do they kind of forget everything?)

Shrimpy here only really remembers the important stuff. Some just goes in one ear, out the other

R = Remember (What is their favorite moment in your relationship?)

His favorite moment is the first time he say you wearing his jersey at his volleyball game. He played better than ever.(Daichi begged you to do this for all their games)

1000000% Protective. He likes to try and intimidate other people who might flirt with you while he likes when you have your arm around him.

T = Try (How much effort would they put into dates, anniversaries, gifts, everyday tasks?)

U = Ugly (What would be some bad habits of theirs?)

Sometimes he just doesn’t know when to calm down. He’s always so excited he doesn’t notice that it might not be the time or place.

V = Vanity (How concerned are they with their looks?)

Not one bit. Period.

W = Whole (Would they feel incomplete without you?)

He would definitely feel like part of him is missing without you. You are so important to him that he wouldn’t be able to function without you.

X = Xtra (A random headcanon for them.)

He only really tries to study if you promise to help him.

Y = Yuck (What are some things they wouldn’t like, either in general or in a partner?)

Hinata is a sleep talker. He’ll mutter in his sleep how much he loves you and other random funny nonsense.

Don’t be afraid to request characters from BNHA or Haikyuu!!

1 photo of the karasuno team celebrating/cheering during a match. 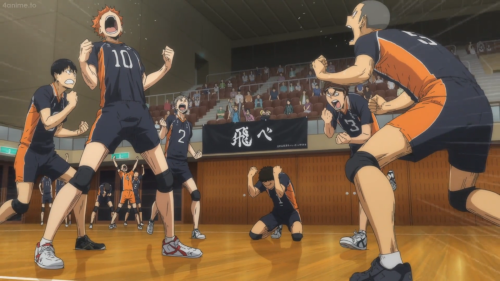