Can Azula and Katara perhaps parallel Villanelle and Eve in dynamics???

basically none of them are cis lmao

One thing that keeps hitting me in ATLA is how much damn endurance Katara and Sokka have. I mean they’re from the southern water tribe, they effectively grew up in their Antarctic circle, and then suddenly they’re having to trek through deserts and jungles and savannahs and other blisteringly hot places in the other nations and… a sunny day half kills me, and I’m from the temperate zone (southern England, same latitude as southern Canada - though my genes are from the Ukraine and Central Asia). Those kids have some serious midichlorians or something. Aang struggles more in the heat than they do, and he’s the bloody Avatar.

just watched some behind-the-scenes clips and interviews of the ATLA cast and the speaking voice of Sokka’s, Zuko’s and Aang’s voice actors sound EXACTLY like them it’s so freaky and amazing at the same time lol

Toph sounded very similar too, but not as much as the boys’.

Also, much respect for Appa & Momo’s voice actor as well as the late Mako for bringing Uncle Iroh to life 🔥

U think you’re old I remeber the ATLA mcdonalds toys

Suki and Katara talking about boys is a conversation that never lasts long because its either cut short by A) Katara screaming with her hands over her ears when Suki says Sokka’s name or B) Suki overwhelmed & at a total loss for words at Katara’s (in her opinion) horrid taste in men, bc lets be real, Jet is Suki’s worst nightmare

We have pretty boi Haru - earth bender, grows a beard at the end, chill boi… I mean it was never confirmed but we all knew she was crushing and then she accidentally got him arrested sooo… would’ve loved if he was featured more but ya know…

We have non-bender Jet - playboy, jerk, tried to kill a wholeass village bc of his prejudice against firebends, wished he’d had more opportunity to redeem himself instead of dying but his one-mindedness ultimately led to his downfall (god he was a fascinating character)

We have our resident hotman and flamey boi Zuko - wants to regain his honour, collapsed the first time he made one (1) right decision, awkward at communication yet somehow manages to lead a country… I am a huge Zutara stan… bc I love me a well done redeemed antagonist…

And ofc our last Airbender Aang - technically the Avatar so more than just an airbender but yknow his first discipline was air bending… soft boi, sweet boi, mildly jealous boi… I also love me some Kataang because their relationship was so organic and developed so well throughout the show… except for that final kiss… that seemed a bit off pace but I’ll forgive it…

And ofc if you count Aang as a water bender too, well… Katara taught him sooo he’s the only one who square up against her badassery…

And he managed to capture her heart! I’m not saying being the Avatar helped be these facts line up pretty neatly… 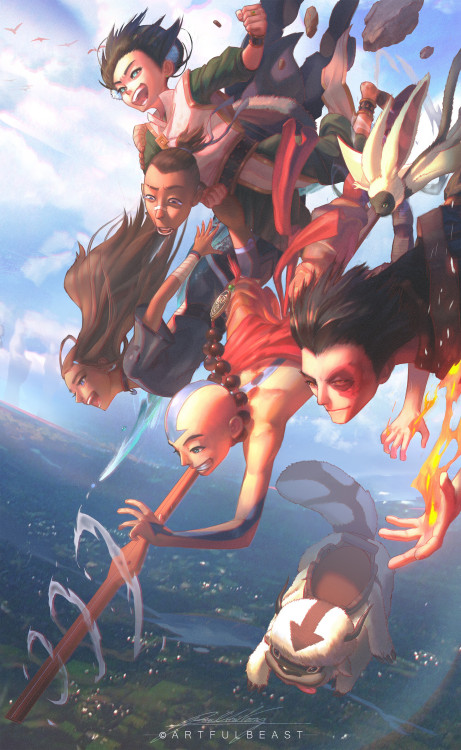 Nice to meet you!!

I made a quiz to see what type of bender you would be in Avatar: The Last Airbender, I’ll reblog with a link

I love it because it’s practical, weather accurate and pretty! I’m not sure if what I’m about to say makes sense, but I’ve always felt this outfit (with this hairstyle) was good at showcasing how much she had matured through the seasons. It makes her look strong and fierce, while still keeping it femenine and very much her. She rocks it and I simply love seeing Katara wearing boots <3

However, I want to make a small shout out to her book 1 outfit. I really like it too for similar reasons, and I reference it a lot when drawing her ♥

#ask, #anon, #katara, #thanks for asking me ♥, #Anonymous
8 notes · See All
phantomrvckText

It’s been almost a decade but…

I remember when I was all for zutara, then I rewatched the series and realized that zukka was actually where it’s at and I’m glad I saw the light before it was too late

#then i found out zukka was an actual thing on tumblr and i sorta fell down the rabbit hole, #love that for me, #sokka, #zuko, #zukka, #atla, #avatar the last airbender, #avatar, #aang, #katara, #toph
14 notes · See All
evymText

Hey you beautiful bitch. Find someone that chooses YOU over mastering the avatar state.

#the avatar returns, #the avatar, #avatar aang, #katara, #someone has probably said this already, #it was a very intrusive thought i had to say it somewhere
2 notes · See All
cherrylavenderteaText

Sokka has two hands and is bi we can have both

since toph wasnt there during book 1 she doesnt know anything theyre talking about besides combustion man, but she does know iroh was super kind and caring of his nephew who she knows is zuko, and to top it all off zuko had been totally sincere during their interaction; i bet all my cash that she was probably at least a little conflicted as the rest of team avatar was just bitching around

imagine if katara had brown eyes the whole time

for my ‘Katara is Vaatu’s Avatar’ idea, imagine her version of the Avatar State

she radiates a sort of black light (which is all kinds of impossible), tinted with red like the blood spilled by all of mankind’s wars, she looks terrifying and awesome

I interpret the Avatar State as the World Spirit (Raava and Vaatu both being aspects of it in this AU) manifesting more directly through the Avatar; Aang is powerful because Raava brings her might, as well as that of the previous incarnations. Katara has no other incarnations, but Vaatu simply summoning himself through her, in his full might and limited by her ability to restrain him.

A bit more like Venom, probably, if the symbiote was a god-monster.

Vaatu is more destructive by far, and his influence in the Avatar State makes Katara a nightmare to behold, a vengeful entity of doom itself walking the world; she likely phases into it during the events of the Southern Raiders, Vaatu’s influence probalby encouraging her to kill

MAKE THEM ALL PAY’

i’m not saying that Vaatu tries to convince Katara to drown the fire nation, kill every single man, woman and child as their ancestors killed the Air Nomads, as they are killing the Water Tribes

and he just doesn’t understand why she won’t.

i am… plagued by a wonderful thought

for an AU where Vaatu does indeed arise early, roused by the chaos of Aang’s time, seeing a world without an Avatar. Caught in a cycle of pointless stasis without meaning, and so, he chooses an Avatar of his own to, in his spiteful way, do the job Raava and her human host apparently won’t.

And the human he is drawn to, is Katara.

Katara; who is kind, who is resolution, who never turns her back on people in need.

Katara; the avatar to the spirit of chaos and destruction.

But she is also bearing a burden of anger, she has seen too much of her people destroyed, and there is so much rage in her… something that Vaatu understands well.

And so that it is from the south pole that something dangerous and destructive arises: a new Avatar, one that is meant to force the world into compliance, as Vaatu sees it, and with the power of all four elements, they can do what Raava couldn’t-

And then Katara wakes up Aang and Vaatu thinks ‘aw, SHIT.’

So now, the world has two Avatars. One of light and order, one of darkness and chaos, and both still very human in a way that the spirits they embody cannot be. Both survivors of the Fire Nation’s evils, both determined to save the world.

And where Raava is indifferent and cold, Aang is kind and loving. Where Vaatu is a destroyer and a breaker of worlds, Katara is a kind person, who would build up something to save their damaged lives.

And bit by bit, Vaatu starts to wonder if perhaps the human he is bonded to do doesn’t have a point here or there.