Katsuki on house arrest: all these fangirls be like “u mine”

Katsuki: BELONG TO THE STATE

thank u for this request, i had so much fun imagining this scenario 😤💖 i hope you like it!!!!

Katsuki with a sassy s/o:

A year ago I created a whole story surrounding a bakudeku fusion AU. Today I grabbed all of the notes and drawings I had done then, and with more artsy-confidence than before, I’ve decided to start redrawing and posting everything this time around.
(This Au doesn’t have to be about shipping, it’s more of the general development of both characters as they grow to be friends, but if you want I don’t really mind. Whatever floats your boat, guys.) 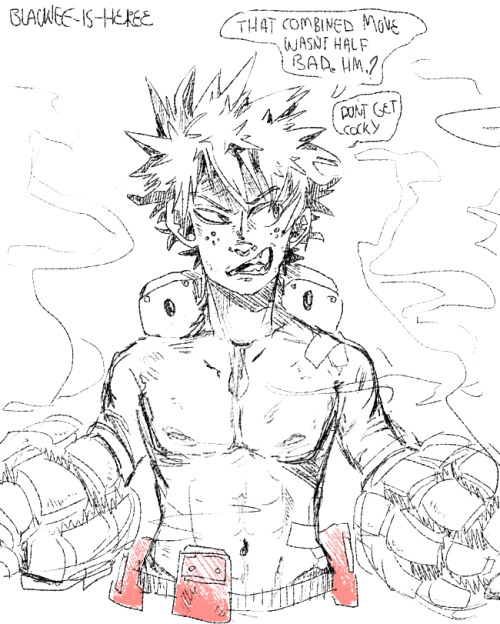 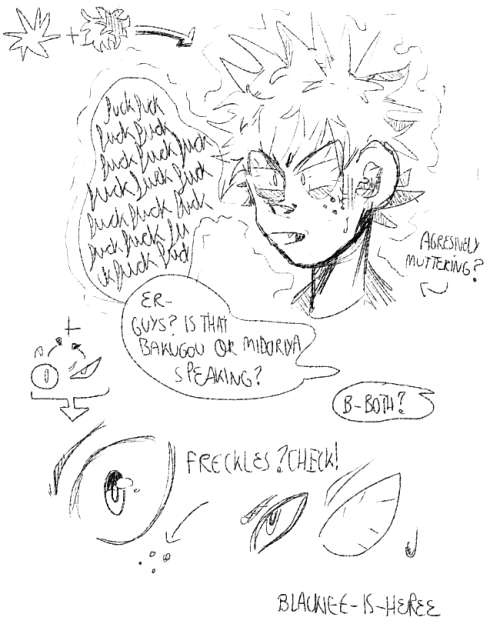 Bakugo: That’s not how you trash talk, doofus.

Bakugo: I prevented a murder today.

Katsuki: None of you should have sex ever.

Denki: Ooh, baby, how are you gonna get laid then?

Eijirou: [chokes on his drink]

Kirishima: What do you call a fish with no eye?

An incorrect bakusquad moment based off of this post.

Kaminari: …we had to climb over the bob wire!

Kaminari: Well, what the hell do you think it’s called?

Kirishima: Oh my god. You guys. BARBED wire. Because the wire has barbs, it’s BARBED.

This is just some Deku art from my insta <3 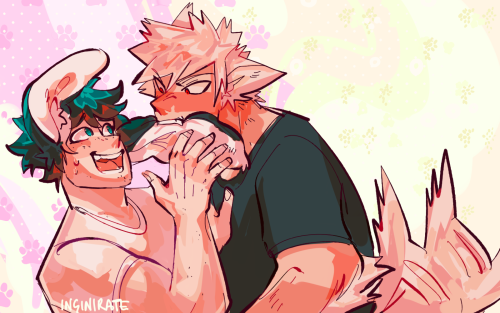 ok first the ‘dont be fucking rude, katsuki’. it really speaks volumes about the way denki thinks. they both know hitoshi is a dead weight but calling someone a dead weight may have really bad consequences and denki knows it.

they dont know really anything about hitoshi but the fact that hes earlyloki + wild middleschool bakugou but a dead weight. so they dont know what may piss him off to the point of noncooperation and that aint good

but its not the best thing:

denkis mad katsuki doesnt have fucking manners and that may cause trouble for both of them.

homeboy be bout to smack the shit outta explosion boy

not only that but when hitoshi agrees with bakugou denki bouta smack that boy too.

this takes me to the point why this arc is my favorite: denki yells. at everyone. at katsuki, at hitoshi, at aizawa and vlad king 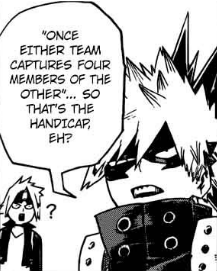 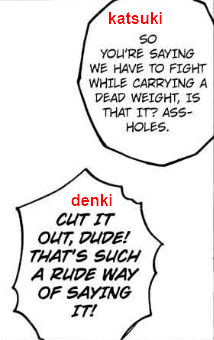 Ochaco Uraraka - she helped me find my class on my first day and she’s lovely, we text sometimes. I swear she likes that Izuku kid because most times i’ve seen her she’s staring at him with literal fucking puppy dog eyes

Denki Kaminari - he literally came right up to me and asked me out like a fucking champ. i said yes and we went in a date but we realised we’re better of as friends, and we’re becoming good ones at that. may i mention the way he asked me out was by saying “heard you’re pyrokinetic, hot quirk for a hot girl”. brilliant

Eijiro Kirishima - he’s so lovely, always has to break up fights between me and Bakugou. the first time it happened he took me out for sushi after school as an apology for his friends behaviour. chivalry isn’t dead!

Koji Koda - he helped a tired bee and it made me smile, friendly giant

Rikido Sato - welcomed me into the school with some home baked cookies, absolutely loved them. forever in his debt

Kyoka Jirou - i stayed round her dorm once and i think she thought i was asleep but she was moving her ear jacks like a wave and singing “just keep swimming”. it was odd but sweet

Hanta Sero - he was explaining his quirk to me and i’m gonna be honest, i thought he was cute so i got kinda flustered and panicked. all i could say in response to his explanation was “sounds kinky”

Fumikage Tokoyami - he knocked on my door at 3 in the fucking morning and asked to hang out. when i asked him what the hell he was thinking he said “well i assumed you’d be awake it’s 3am and you practice witchcraft, it’s witching hour isn’t it?”. i was asleep

Shoto Todoroki - first person to beat me. don’t wanna talk about it. god Shoto not everyone’s dad is number 1

Katsuki Bakugou - i beat him in a fight during training, and afterwards he stormed into my class and said “YOU THINK YOU’RE BETTER THAN ME CLOWN EYES?”. I simply said “no, i know i am”. we don’t get along needless to say. he insists on calling me clown eyes because of my eye markings

Izuku Midoriya - I see him talk to himself ALOT, even when he’s with friends he literally looks at his phone and mumbles

Minoru Mineta - he’s actually pretty funny, but his attempt at hitting on me was worse and more straight forward than Denki’s. he literally said, “your boobs look nice in your hero costume”. i didnt know what to do but it made me laugh so i gave him my number in a friend way

Yosetsu Awase - on like my first day i tapped him on the shoulder to get his attention for something and he just shouted “what the FUCK is it this time you creepy little shit”. i was confused and he had to explain he thought i was Monoma. we’ve been good friends since

Ibara Shiozaki - i didn’t know what she was like initially so when we first spoke she asked me what i was, meaning like nationality, and i just said “God”. imagine my confusion when she starts blessing herself praying. she also doesn’t sleepover at my dorm because she’s scared my “witch stuff will taint her holiness”.

Juzo Honenuki - i told him he was cute on my first day and i didn’t know he was gonna be kind of shy, and his only response was to do an awkward shuffle dance?

Neito Monoma - he got into an argument with Awase and ran out of point so just screamed “i will SHIT in your milkshake”. Awase didn’t have a milkshake and sensei wasn’t impressed

Nirengeki Shoda - he doesn’t look like the kinda guy to be a fan, so i was pretty shocked when i heard WTTBP blasting through his headphones in class

Kosei Tsuburaba - came up to me one morning after getting a hair cut and kept feeling his hair so i’d notice it. i noticed but i didn’t bring it up to annoy him and he got so frustrated and he just said “Akama do you like my fucking hair it looks nice just say something”

Pony Tsunotori - she invited me over for a sleepover and i was early so i just let myself in, only to see her filming herself dance to 90’s rave music. a sight to behold. of course i joined in

Jurota Shishida - tried to ride him like a horse when he was transformed during training. i don’t think he was impressed

Sen Kaibara - it drives him INSANE when i greet him as either Spinny Boi or Clyde Donovan. he’s hella cool tho we go to the beach together sometimes

Shihai Kuroiro - i call him cute because it annoys him. once when i was wearing my black cape during training i didn’t see him go inside of it. when i was in mid air he popped his head out and scared the shit out of me, so i lost control and we both fell the the ground

Hitoshi Shinsou - we had a sleepover instead neither of us sleep so we just stayed up all night and i showed him some of my favourite british/american comedies. he really likes American Pie

Aizawa is such a TIRED DAD. He teaches TEENAGERS. He tutors his PURPLE SON. He goes on MISSIONS. He takes his dumbass students to EXTRA LESSONS. That is on TOP of the OTHER extra lessons that he ALREADY TEACHES. He is watching a little girl so he can use his QUIRK and HELP her. He deserves all the REST and i LOVE HIM. 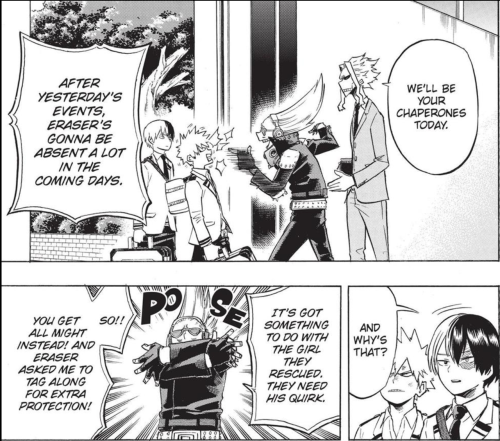