ASCEND // ACCELERATE ○ GEN ○ Dirk Strider & others, exploration of the processes of ascension to the ultimate self.  finished - my fave thing I have written for HS.

SOAPSTUCK. ○ NOT GEN* ○ The worse soap opera in all of history starring Karkat as The Adulterer, Dave as The Hot Pool Boy and Dirk as Husband Who Is Possessed By Demon Who Looks Just Like Him. discontinued.

UNSCRATCHED REMIX MIXTAPE ○ AU ○ DaveKat, SolKat, others. ○  On the eve of his induction into adulthood, Karkat Vantas prepares to face his destiny. As it happens, it’s not the destiny he anticipated. on hiatus.

O’ER THE TREES TO HADES ○ GEN ○ Exploration of Rose and Dave as seen in Pesterquest. finished.

*i genuinely do not  how to rate this, rip.

FROM ONE LIFE TO THE NEXT ○ GEN ○ The last thoughts of Rick Macy.

“Well, I’ll tell you how to change it. This time, you live. You don’t leave, you stay.”

#in the flesh#kieren walker#luke newberry#itfedit#inthefleshedit#wow this episode still hurts huh. psychological damage.#i was so unhappy with this set ive been reworking it for days 😑 you get 7 instead of 6#also sad i couldn't get rick into any of them or amy into this one#itfrewatch#mine#blood tw
110 notes
blindedbythedarkness
Text

There’s this show about dying that I always wish I’d showed you; it’s called In The Flesh. I mean, it isn’t exactly about dying; it’s about depression and growing up and not fitting in and… zombies. Yeah, okay, the show’s about zombies but the whole thing’s a massive metaphor, trust me.

To summarize it briefly, the show is about a young boy, Kieren, who comes back from the dead after committing suicide a few years earlier. He took his life after his boyfriend, who had been pressured into joining the army by his homophobic father, was blown up in Afghanistan. Kieren doesn’t exactly have an easy time moving back home though, since the rural northern village he lives in is very anti-zombie, given that before they learnt how to medicate them, all the undead sort of ran rabid around town killing people. Not exactly ideal, I’m sure you’ll agree. So yeah, a lot to unpack there, even though it only ever had 9 episodes in total (something I will forever be salty about).

From the first time I watched the show I fell in love with it. The fact I was so depressed at the time probably helped make me feel understood, but it went deeper than that too. I related to Kieren on so many levels, feeling trapped, excluded and suicidal and other ways I still struggle to put words to. Even the mere physiology of the zombies, the being cold, unhealthily pale, unable to eat and generally falling apart, seriously resonated with my situation.

There’s this saying they have in the show, an affirmation they call it, for the undead struggling with the guilt of what they did:

I am a partially deceased syndrome sufferer and what I did in my untreated state was not my fault.

I’ve always loved that. Not only is it obviously amusing conceptually, but I always felt as though a part of me related. I’m pretty sure I’ve never gone rabid and eaten my neighbour, so in truth I don’t know why I feel that way, but I do and so it weirdly brings me comfort. I even got a T-shirt with it on, maybe you saw it? I’ve had it years now and it’s been washed so many times the letters are starting to peel. I’ve had people, strangers even, comment on it before and laugh a little. I don’t mind, of course, I’m glad they appreciate the joke, but for me it’s more. It’s a reminder that I’m not alone when I catch sight of it in the mirror.

Okay so, I have a slight obsession with a zombie show, why am I telling you about it though? Well, because it very much contributed to saving my life back when I was younger and dangerously suicidal. There’s plenty of heart wrenching scenes in the show, but there’s this one in particular that really etched its effects into my soul. Kieren goes off on his own into the woods after things get shit again in Life Attempt Two, and when he returns home he tells his dad to open up. To just fucking tell him how he’s made him feel by being selfish and “disappearing again”. So that’s what his dad does:

“I was worried sick. You just go out. Don’t tell anyone where you’re going. No contact for days.

Jem thinks she knows where you might be. So I put on my jacket and get my torch and I go up into the woods. And I get there. I get to the cave. And there you are. You’re sitting down; you’re leaning on a rock. I think “thank God he’s okay”. But then I get close. I see that Swiss army knife I got you for your birthday. You’re covered in blood. So much blood.

The first time I watched that scene I sobbed. It broke my heart. I was someone who had been more than toying with the idea of ending my own life in a way not dissimilar to that, but this finally made the impacts of my decision real. When I first watched In The Flesh, I had been jealous of Kieren. Not jealous that he got a second chance at life, but jealous that he had had the guts to take it in the first place. I truly understood why he did it. But that scene, the final scene of the first season, made me feel so fucking guilty. It wasn’t that I didn’t care about hurting my family and friends in committing suicide, it was just that the pain I felt outweighed that guilt. But this, seeing someone confronted about their suicide and how the effects of a decision like that play out; it changed something in me. From that point onwards, as close as I got to ending my life, I could never go through with it. That scene just kept on playing in my head, a virus and a stark reminder that my actions would have consequences. That scene broke my heart and in doing so made sure that it kept beating.

So, Josh, do you see now why I wish I had shown you this show? I mean, I see it in a whole different light now that you’re gone; I’m on the other side of it all. I’m not trying to say that it would have saved your life too. I mean, that would be a lot of pressure for a TV show. But perhaps it would have made you feel less alone; I can think of a hundred ways you would probably have related to Kieren and other characters too. Maybe it would have just entertained you, maybe it would have brought you peace and comfort too. Maybe you wouldn’t have vibed with it at all. I can only speculate. But I wish like fuck I’d at least tried to share it with you. Should of, could of, would of, eh?

For the record, I think it would be pretty cool if you became a partially deceased syndrome sufferer. Although, maybe not the rabid sort. A word of warning though if you ever do: there would be a long queue of people ready to let you know what you did to them, and not all as calmly as Kieren’s dad did.

I miss you so much, Josh.

[ID: a drawing of kieren walker and simon monroe from the final episode of in the flesh. it’s the scene after simon guides kieren out of the crowd at the cemetery; they’re sitting alone in the hospital waiting room, one empty seat between them. simon is looking at kieren with wonder and admiration, and kieren looks back at him with confusion and anxiety. kieren’s lips are still a bit stained dark from the aftermath of what he just went through. end ID.] 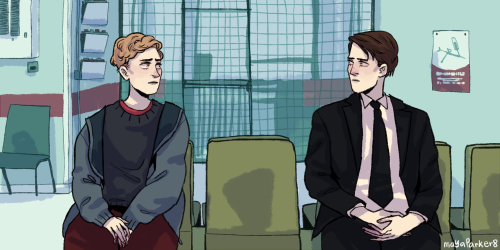 “Deep down, fearing the Reaper is the reason why everyone’s so messed up in the head. They know the end is nigh, but there’s nothing they can do about it so it drives them nuts and they live their lives with one eye on the clock. We don’t have to do that. We can smash the clock to pieces. That is an incredible blessing.”

I think about this show a normal amount

They live in my head rent free now i guess

i figured out the timelapse feature on csp and spent 30 mins drawing mr. kieren in the flesh before i got bored 🤭

#kieren walker#in the flesh#speedpaint groovin#the more i watch this the more im like this is Terrible but. i did it! nd that's what matters!!
33 notes
lukeskqwalker
Text

“I’ve found the first risen. You should see him… he’s beautiful.”

In The Flesh is a CRIMINALLY underrated show y’all 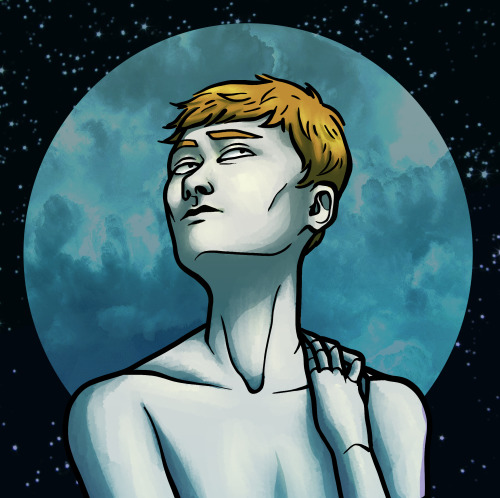 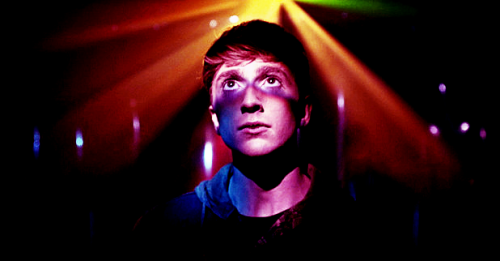 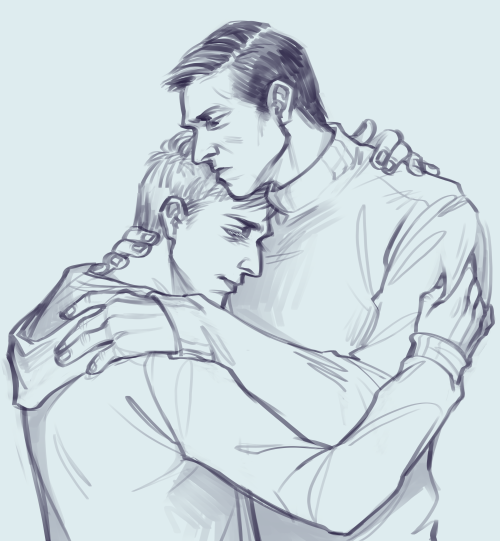