I also wanted to bump my AO3 really quick since I’ve been writing a lot lately! I mainly write for KuroBas (yes, still, in the year 2019 lol), but if you like KiKaga, KiKasa, AoKise, or Kaijou in general, I might have something for you~

Summary: Kagami, who has never taken an interest in anything besides basketball, realizes (with Kuroko’s help) that he has a crush on Kise, and he’s pretty sure he’s screwed. Unfortunately for Kise (and Kasamatsu’s patience), Kagami is also hopelessly dense.

Summary: Kagami, who has never taken an interest in anything besides basketball, realizes (with Kuroko’s help) that he has a crush on Kise, and he’s pretty sure he’s screwed. Unfortunately for Kise (and Kasamatsu’s patience), Kagami is also hopelessly dense. 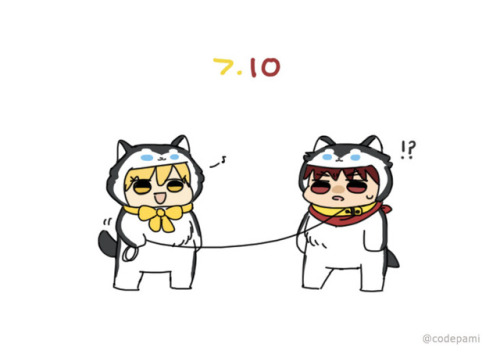 Kagami visits Kise in the hospital.

Kagami, the prince, has fallen in love with Kise, his King’s Guard. But he’s nineteen and will have to marry soon.

#kikaga, #kagakise, #kikaga week, #kagakise week, #kagami taiga, #kise ryouta, #day 7 AU, #lol I'm writing these out of order, #but I'm already behind, #and this one came to me and I just had to write it before I forget.
1 notes · See All
gumdropliceLink
Keep To Your Side Of The Bed - Ravenblossom - Kuroko no Basuke | Kuroko's Basketball [Archive of Our Own]https://archiveofourown.org/works/14703081

Kagami and Kise have to share a hotel room, and of course there is only one bed.

#Kikaga, #kikaga week, #kagakise, #kagakise week, #day 3 vacation, #lol I'm so behind on these, #If anyone wants to rewrite this as smut go right ahead!, #but I'm way too shy for that.
4 notes · See All
codepamiPhoto

That awkward moment when you remember that you naively shipped Kise/Kagami during that one episode of Kuroko no Basket and started calling them Mommy and Daddy after that. (It was episode 5). If only I had known the true Daddy back then. 😂😂😂

“Whether it’s in New York or L.A. or Japan, I’m still going to love you. There’s just no reason to keep holding it back.”

My intention was to post the full volume when it was done. My intention was to write in my hybrid style and then reformat it into prose. Neither are true anymore. Unlike the previous volumes, this is only being written in prose and will post chapter by chapter.

Please enjoy the start of the final volume.

Kagami pairings are strong with this one…with everyone… I love it.

Send me a ship and I’ll tell you…

who makes the bed: Kagami! But if they get up at the same time Kise helps him.

who wakes up first: Kise has his morning routine, but I’d still say Kagami.

who has the weird taste in music: Even though Kise likes most international music, he and Kagami listen to Latin American and American music together! Also chill mixes.

who is more protective: Kagami is aware of all the girls fawning over Kise, but Kise is secretly glad he can keep the attention off Kagami. Because those girls don’t know what they’re missing out on.

who sings in the shower: Kise, he’s a shower diva rock star.

who cries during movies: They both do. They try and not cry, or comfort the other, but they both end up bawling and laughing at each other for it.

who spends the most while out shopping: Kise, he loves buying Kagami designer clothes. He thinks Kagami would make a really good model.

who kisses more roughly: Kise. Kagami can be rough too, but who wouldn’t be rough seeing Kagami blushing and flushed, with his lips wet.. omg I’m stopping.

Now, volumes One, Two, and Three are complete with both the prose and hybrid. Please check it out.

With that done, I’m going to continue work on Volume Four. Unlike the others, Volume Four is going straight to prose (I absentmindedly started writing it as prose, so I’m not going to undo that just for the sake of consistency–too much work to do it in that order). My apologies to those fond of that version.

Volume Four is the final arc and the final volume. Definitely. But in the meantime, please enjoy the prose-ified Volume Three.

I’m so sorry it took me this long to reply. My free time is slowly disappearing… OTL This is kinda halfway between a relationSHIP and a friendSHIP because I am everyone x kagami trash…

Hmm, I’d say Kagami would win, but it would be a tough game against Kise.

Kagami XD Kise would be like “omg Kagamicchi are you okay?!?!” and check Kagami over for injuries.

I’d see Kise doing this, but then Kagami would probably use a whole bucket of ice on Kise for revenge.

They’d just watch the movie together. Nobody spoils!

It would probably be whoever is hungry, sees the slice, and eats it. They’d probably yell “I’m eating it, do you want some?” and get a “nah” or “why not” in response. It’s pretty chill.

Kagami starts, Kise tries to continue, but they both really aren’t that good and it lasts barely one day.

Ah definitely Kise! Although I’m taking this more like overly close friendship, it would probably be teasing flirting and Kagami hurriedly trying to delete all the posts before everyone he knows sees them. Which they do, of course.

Kagami probably gets more visually fired up, but I’m sure they both like winning XD

I can see them both having full-on conversations. Then saying “Goodnight!” but then “Ah, just one more thing!” and then “Okay, actually goodnight” and “ah, but this…” Who knows how long they last.

Kise probably feels a bit self-conscious if his breath smells like garlic and wouldn’t initiate anything before brushing his teeth or eating a mint, but Kagami wouldn’t really care that much if they’re at home.

Person A has just moved in next door to B and it had been a long day of moving and unpacking so both thought it better to greet the neighbor tomorrow. The thing is, it’s a Saturday night and someone is throwing a very loud party nearby.

Both are having trouble sleeping. A has finally had enough and stomps over to their window, opens it right when B does, and screams “WILL YOU SHUT THE EVER LOVING FUCK UP!!!!”

When A finishes cursing out all party goers they turn to see B staring at them. A freaks out and runs inside due to embarrassment, and that’s where it all begins.

It’s their last night in New York, and Kise wants it to be unforgettable.

Beta: Anna ( @daiyafordayz ) Thank you so much! She kicked this chapter into shape and I’m very, very grateful for that.
Pairing: Kagami Taiga/Kise Ryouta
Warnings: UST, language, Kagami being romantic sap
Word count: 9633
Also on: AO3, ffnet
A/N: We’re finally in Touou! I hope reading this chapter will make you as happy as I was when I was writing it. It’s a very peaceful chapter – with a twist ;)
Rated NC-17 for whole series, PG-13 for this chapter. Previous chapter: here.

He stared numbly at the closed doors before his brain kicked in. He gently sets the items Kise gifted him on the desk and stripsdown to his underwear. The night – bordering dawn with sky slowly fading from the pitch dark black to a navy-blue – is too hot to sleep in any clothes. The bed is soft, and inviting but Kagami, with his head full of dark thoughts, knows he wouldn’t be able to sleep.

#kagakise, #kikaga, #kagami taiga, #kise ryouta, #imayoshi shouichi, #my fanfiction, #tell me what do you think about this chapter!
12 notes · See All
firebyfireAnswer
Hello :) Uhm do you know any fanfic about YandereKise to Kagami? I dunno, this ship is messing me up right now and if only i can write, I'll write tons about them.

I’m sorry, but I don’t know any :( I wrote a few scenarios for them in ‘yandere!kise’ tag but that’s all.

Does anyone know any Yandere!Kise/Kagami fics?

#kagakise, #kisekaga, #kikaga, #kagakise we are talking about you, #otp: my promise to you was the most important, #Anonymous, #anon talks
6 notes · See All
Next Page