one shot,, one kill

Reading On Killing by Dave Grossman and goddamn, it is both well-written and kind of gutting. Honestly, I have to recommend* it to everyone, but especially anyone who is interested in the clone troopers re. their training on Kamino, and their actions on the battlefield. (And yes, On Killing can be found pretty easily for free online)

*I feel I ought to disclaim this with the admission that I do disagree with some— though not all— of Grossman’s points re. video games, as the research I’ve personally done into the subject does contradict a few— again, not all— of his conclusions, but I’m not going to get into that here.

Sima has always been one of Lucifer’s children who seems to exude confidence within everything that she does but there are many things below the confident façade that she fights daily. She never wants for anyone to see her as anything less than the confident firstborn daughter of the King of Hell, but there come points where her demons and fear get the better of her.

She is scared to love; as much as it does not seem that way, the Morningstar is scared of finding and falling in love with someone. This is down to her mother; whenever she fell in love in the past, her mother would find out and either hunt down and kill her lover or throw them into the Lilim’s layer within Hell; heavily guarded by Lilim demons that made it virtually impossible for Sima to get to.

Lucifer had tried on numerous occasions to reason with Lilith about this, but even if he managed to bring them back, the mother of demons hunted them down once more, leaving pain for Sima in place of love ~ even getting Mazikeen at one point, to hunt a love down who Sima had really fell in love with.

At points, whenever Sima was growing up, she would also defy her mother’s ideas and ideals. This too would anger Lilith; the fact that Sima was more like her father than her was something she could not deal with and as such, Lilith would throw Sima into tight rooms or cages that meant she could not get in the way of her creation of lilim demons. As such, she can not deal with the likes of confinement or cages any more and for the most part, will keep the panic she feels internalised ~ another thing that Lilith had drilled into her ~ in fear that if she physically screamed or showed her fear completely, she’d get a punishment.

yknow what? i’m just gonna say it; i would kill a man for a pacifier okay

#they’re so funky!! and i would explain further but it would. not sound right.#i just want one really bad ok#i’m baby#killing tw
11 notes
pyrrhicmessiah
Photo

the ark:   of course,   clarke was raised on the ark.   all her memories from birth to seventeen are on the ark.   it’s where she used to follow her mother around in the hospital,   dreaming of one day being a surgeon like her.   it’s the last place she saw her father.   it’s worth noting that her mental landscape takes the form of the ark,   and that her worst memories are not contained within the ark,   but in a landscape that looks much like the place where she mercy killed finn.

her cell:   she spent nearly a year in solitary confinement in this cell,    she knew every inch of the space and endeavored to cover every inch in her imagined drawings of what earth might look like.   depictions of earth,   flora,   animals,   all based on what she’s seen in textbooks and old film media,   covered the walls and floor.   it is worth noting here also that it was within this cell that her reserved self appeared in her mental landscape,   with memories of her friends and loved ones decorating the walls instead.

the dropship:   her first   ‘   home   ’   on earth,   so to speak.   this is where she bonded with the delinquents,   where she first started to take on that responsibility for their survival that weighs on her so heavily.   this is also the site of an   IMPOSSIBLE CHOICE,   where she instructed jasper to light the jet fuel and burn the hundreds of earthborn attackers despite believing that bellamy and finn would also perish in the flames.

ton dc:   the site of another   IMPOSSIBLE CHOICE.   with full knowledge that a bomb would be dropping on the village,   she left alongside lexa without warning anyone.   hundreds more died at the hands of the mountain men that day,   and although she is not directly responsible for their deaths,   she knows that she could have prevented them and so it does not feel any different to her,   no matter who sent the bomb in the first place.

mount weather:   of course,   the site of her most notorious   IMPOSSIBLE CHOICE.   the mountain is the reason she became known as    WANHEDA.   the girl who came to the ground with eyes full of bright hope,   amazed at the green life of the forest,    who learned to wish on shooting stars…    that girl surfaced from the mountain bunker forever changed.   although she would make the same decision again today if she had to,   there is an inescapable GUILT within her for the massacre that day.

polis:   the site of the battle with ALIE and the final conclave,    two very different moments in clarke’s time on earth.   the first,   a moment of true heroism,   choosing to face pain and suffering so that they might truly live.    the second,   one of her greatest mistakes,   fear and anxiety over the past leading her to try to steal the bunker instead of trusting in octavia.

arkadia:   the campsite and perhaps second   ‘   home   ’   for clarke on earth is intertwined with a sense of responsibility.   she had taken charge before storming the mountain because she knew her friends were in danger,   but after the battle with ALIE,   people continued to look to her.   although she often does think she knows best,   her time in a leadership position in arkadia showed her the true difficulties of leading.

the desert:   she will never regret choosing to stay behind so that her friends could make it to the ring,   but her time alone in the desert haunts her.   she came so close to giving up.    between her residual guilt and the daily ordeal of solitude…   the bunker being covered in rubble…   her friends unreachable on the ring…    the reality of her desperate loneliness truly sunk in.   and yet,   somehow she found the strength within her to go on.

shallow valley / eden:   finding the valley gave her hope in the hopeless post-praimfiya world.   finding madi there gave her purpose.   for six years clarke was able to just be CLARKE.   having the chance to set down the mask of wanheda and just be herself,   caring for madi and surviving together in the strange new world was relief like nothing else.   in that time,   she’s able to find some semblance of peace.   she draws actively for the first time in a long,   long time.   she reconnects with the person she can remember being once,   dreaming of living on the ground someday.   but she also starts to process her own failures and traumas;   she tells madi stories from before praimfiya,   in which she is never the hero.   once everyone is reunited,   settling into the last patch of green on earth,   the valley becomes her true home. 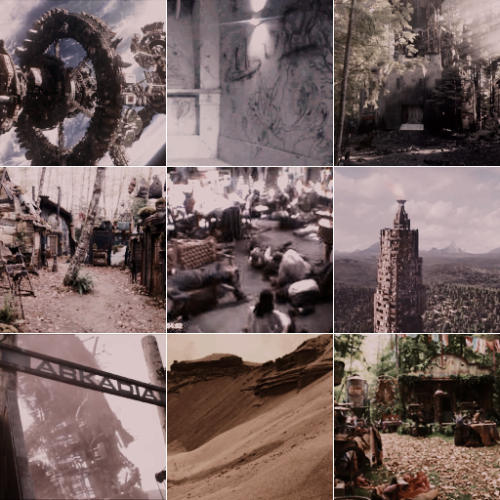 #killing tw#long post cw#death tw#PEOPLE DO NOT TALK ENOUGH ABOUT HOW SHE WAS IN SOLITARY CONFINEMENT AT 17 YEARS OLD#hahaha sorry if anyone thought this was going to just be aesthetic#the most important locations in clarke's life are mostly just places where she killed a bunch of poeple#rip#&. I FEEL THE SUN ON MY FACE. I SEE TREES ALL AROUND ME; THE SCENT OF WILDFLOWERS ON A BREEZE. IT'S SO BEAUTIFUL ( aesthetic. )#&. REMIND THEM WHAT HELL LOOKS LIKE WHEN IT WEARS THE SKIN OF A GENTLE HUMAN ( character study. )
4 notes
am-i-the-boy-you-dreamed-of
Text

i would kill a man for a kiss rn

“honestly niki is completely justified in killing tommy <3 tommy sucks <3 i get it hes traumatized, so is niki <3 thats why its ok if she kills him its coping <3″

*Kills you* (confession of love)