When Wakanda decides it wants to reach out to the rest of the world, King T'Chaka and the other world leaders agree on an exchange of ambassadors in order to learn more about their respective societies.

The world leaders choose to send Captain America as an ambassador, as the man already had history with Wakanda during WWII.

Steve and Prince T’challa become close as T’challa guides Steve through his exploration of Wakanda and it’s many treasures.

A solo art entry for the @marvelrarepairbang​ 2019

Do you understand how many drafts of kittycap doodles I have??? 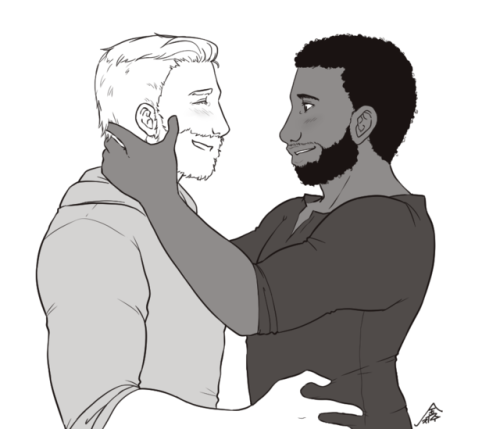 #kittycap, #Steve Rogers, #T’Challa, #stevet’challa, #marvel fanart, #my art, #olol so many guys so many
38 notes · See All
fireflowersfruitAnswer
You got any kittycap headcanons or ideas you'd be willing to share? You're one of the only people I trust to get that ship right, so I was curious. :)

BOY DO I?? I hc that t’challa and steve’s relationship would rly come from a place of like respect but it would not come easily esp in the beginning lmao. (for one, t’challa would get the shield back. It’s his. It belongs to him. Point blank lol. And he only lets steve – or whatever other americans – have it back on his own terms.) But as they get to kno each other and work together, steve would rly grow to admire t’challa on a personal level and lbr t’challa would be a little charmed by steve’s friendliness bc they do actually share a lot of the same like ideals and priorities…

anyway then steve would blow t’challa’s back out and that would be that lmfao idk what else to tell ya the boy is a hoe and loves a good railing :)

Lmao well I could think of a hundred scenarios where T'Challa is having a shitty or lazy day and Steve just sidles on up to him like “lemme hold you.” Sometimes T'Challa likes to be spooned in the dark while they lie in bed but this time maybe he puts his head in Steve’s lap and zones out to the tv while Steve gently massages at his shoulders. And T'Challa is sensitive so the rhythmic pressure of Steve’s hands on his skin gets him all hot after a while and he starts to drift and when he drifts he gets needy and cuddles in even closer and starts rubbing his face against Steve’s thighs, fingers going for the button… that sounds abt right to me.

“Anyway, we wanna court you.” Bucky grins. Steve throws his hands up.

“Buck. There was a way I was going to say that–”

“He doesn’t need anyone sugar-coating shit for him Stevie.” Bucky shrugs, “He knows what we mean.”

Or, where Steve and Bucky are a mated pair who fall in love with T'Challa.
…This’ll get complicated.

Turns out Steve is the one who finally broke the sexual tension by tracking T’Challa down to his office and well. The secret Avengers don’t need cable, they have a rom com happening right where they live.