Sir Reginald Hargreeves has kicked the bucket, and Klaus has to rejoin his dysfunctional family mostly just to make sure that the old man is not going to haunt him in his nightmares. Turns out, all of his siblings have different plans; with Dave’s support, he’s gonna handle it.

Even when the world is ending.

This is a theory of mine, BUT imagine if Klaus finds Dave in the second season, and since he knows that Dave likes him he will go after him. After some time they get together and when the time comes that Klaus has to leave the 60’s he tells Dave everything, and tells him that in 1969 in Vietnam he will appear out of nowhere and that he will not remember him, but that at the end they will be together, and that was the reason why Dave since the start was so interested in him, bc he already knew him and he was already in love with Klaus.

Klaus keychains are in my store now!

Hey it would b hella if you could take a listen to my klave playlist bc I made this a while ago before I remade my tumblr.

A/N: A reflection on a relationship forged in war, from the perspective of the soldier that never made it home.

What I’m asking is - is it possible that five killed Dave?

according to Cody Ray Thompson (the guy who played Dave), Dave was born in Wisconsin in 1940, making him around 20-23 by the time Klaus gets stuck in the 60s and 28 when he died. And given that the average age of a soldier during the Vietnam War was around 22, more than likely Dave has already entered the military or is in training when Klaus arrives.

Other than maybe explaining why, in the released pictures, Klaus appears to want the car keys that Ben is holding away from him, I can’t really see Dave being a major part of Season 2 other than as a distraction or reason for Klaus to leave Dallas while Ben wants him to stay and/or search for the rest of the Academy.

Maybe Klaus wants to find Dave and somehow try to stop his death but Ben stops him because that would disrupt the timeline and erase Klaus and Dave from ever meeting in the first place? That would definitely be a source of conflict, especially if someone else, like Vanya, was to get a love interest this season while Klaus can’t interfere with Dave’s predestined death.

Klaus: Here let me hold this for you.

How does Klaus snap so fast from looking like a hippie cult leader to manifesting as the non-binary lesbian vampire slayer we never new we needed?

First there is progress…

Then there is completion!

Dave Katz and Klaus Hargreeves from The Umbrella Academy. Done in colored pencils. Not perfect by any means but I am pretty dang proud of this 🙌🏻

Some Klave with a little bit of spice!

Klaus’ face looked shallow under the shitty lighting of the rundown motel. A cigarette hung loosely from his fingers as he pulled and poked at his cheeks and forehead. There were a few spots and scars here and there from the stress that came from war.

In an oddly sick fashion, he fit in quite well in the army. He got meals, bad, greasy ones but meals nonetheless, a bed, clothes and, most importantly, people who cared about him. Whether it was reluctantly or due to actual compassion he wasn’t sure.

He was used to fighting because of the wonderful atrocity that was his childhood. The dead people had been hard to adjust to, there were fellow soldiers as well as angry Vietnamese people. However, this particular war was infamous for the excessive drug use that the soldiers partook in.

Most people smoked, cigarettes and weed. Others went further and took pills, coke, LSD or even heroin. One of his comrades who lived up to the troubled youth stereotype, was Chris,a college grad who did anything to block out the pain.

Some other comrades were Pope, a devout Catholic who had accepted the draft when it came for him, CJ, a loyal lovestruck man whose only lifeline was the dream of marrying his girl at home, Richard, an avid Tolkienist, and Miller, a real life cowboy who had taken the draft to prove something to his dad.

These guys had been slow to trust him, with his modern ideals and openness with his expression. Klaus had found it hard to trust them too, having spent so long not being enough for people and having to give something to get basic respect. Yet, as he began to take his time there lore seriously, the guys took him into their makeshift family and that was that.

Dave was different though. He’d taken an immediate liking to Klaus, guiding him through the battles and caring for him when times got tough.

He was patient, not leaving when Klaus’ bad self-esteem and trust issues waved red flags whenever someone got close to him. There were so many amazing qualities about him that dazzled him. From his open heart to loyalty, he was so wildly different from anyone he’d ever associated himself with before.

Their first kiss had been magical. To say the least. He couldn’t truly recall what they were talking about prior, something deep and intimate that had powered Dave to reach out and kiss him. His lips had been moist from the liquor, the dull burn that came with it spread to Klaus’ mouth as they stood frozen in time. He could still feel the light sheen of sweat on Dave’s face and hand from the night’s dancing.

They kissed for the rest of that night, and their leave. Dave’s deep rooted homophobia scaring him from going further than supple lips and smooth caresses in low lots rooms and clubs.

But, last night had changed that. They’d spent just over a month with barely any touches, pretending, putting on a mask of heterosexuality. So with the free willed nature of leave, Dave had grabbed Klaus and made hot, sweet love to him.

The air had been thick with humidity and pleasure. Dave had rocked carefully in and out, fresh anxiety preventing him from going too fast or hard. Instead he’d pulled out the groans and gasps from his lover slowly, taking Klaus apart bit by bit as he licked, sucked and bit every inch of his skin.

That was what he’d been admiring in the mirror. The hickies and bitemarks that stood out against the pale skin that had only just gained a slight tan.

He smiled, because these marks showed that he belonged to someone, and meant something to someone. That he wasn’t just a body or a junkie. He was a person, a person who was loved.

Smooch. Dave made his boyfriend jump as he snaked his arms around his brittle middle, kissing the marks that he was so proud of.

“You surprised me there,sweetheart,” Klaus said, leaning his head to the side to let Dave get more leverage to kiss his way across his shoulders and wrapped a hand in his hair.

“Didn’t know you were so deep in thought,” He chuckled, letting one hand move towards his privates as he nestled them closer. “Wanna go for another round this morning,”

They shared a look, “I mean yeah, but you’re going to tire me out before the day’s even started,” He said and turned around, pushing the two back onto the bed.

“You just drive me crazy, so crazy that if I don’t get to touch you when I can, I might explode if I don’t make the most of our situation,” He’d sat upright now and pulled Klaus onto his lap as he carried on kissing and adoring his neck.

“You continue to surprise me,” He replied, shuffling slightly and tilting Dave’s face up to kiss his eyes, then his nose and finally his mouth. “But that’s enough talking for now, Mr Katz, why don’t you surprise me even more with your love making skills?”

They grinned at each other maniacally before Dave said, “Will do Mr Hargreeves, will do,” and flipped them over to fully use their time together

Klaus: Yeah, Dave was amazing. You would’ve really liked him.

Five: Why do people always say that? I hate everybody, why would I like *him?* 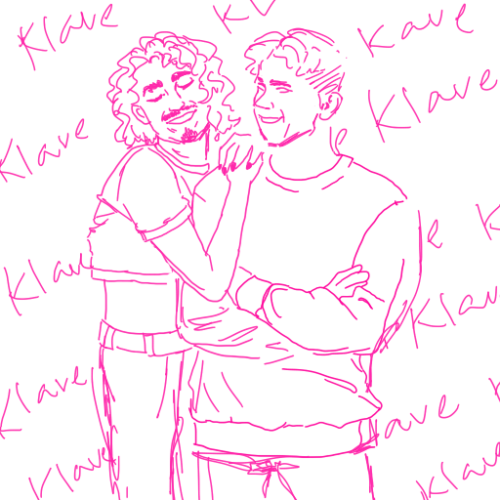 If we don’t get more Dave in season 2 I’m going to punch someone. You buried your gay, you better be ready to dig him up and bring him back as a sexy ghost.

A/N: The shorter of two Klaus x Dave, Hadestown inspired fics that came to me today. It is Sad.

#Klaus Hargreeves, #Dave Katz, #Klaus x Dave, #The Umbrella Academy, #TUA, #Five Hargreeves, #I am the Angst Fairy Godmother, #Hello. I made myself sad., #sometimes I like to write canon pairings, #I am an emotional masochist
11 notes · See All
sunset-strlightAnswer

He’d clicked with Dave immediately, and the man never seemed to get tired of him, something Klaus wasn’t really used to. They’d gotten close over the last couple months, and Dave had patiently taught him everything about this new place he was stuck in. But, also, he *listened*. He listened to Klaus’ late-night, practically nonsensical ramblings. And he listened when Klaus told him the whole story about where he had come from. They’d stayed out late together, one night, and Klaus, drunk and finally sure he could trust Dave, had told him the whole story.

Everything from him and his siblings’ powers, to the death of Reginald and their odd family reunion, to the murders he’d witnessed, to the kidnapping, and finally to the time traveling briefcase he’d used to get there. He couldn’t tell if Dave really believed his story, but if he didn’t, he never said anything.

It had become a more common occurrence, after that; the two sneaking off together, and Dave listening intently to Klaus’ stories of the future. One topic that came up a lot was Klaus’ siblings. Dave found the family very interesting. Dave had brothers, as well, but the most interesting thing about them was that one of them was missing a toe.

Klaus’ brothers, on the other hand, were extremely interesting. One of them was apparently fantastically strong, and could almost lift a truck without breaking a sweat! Dave thought that amount of strength would be pretty useful on a battlefield.

Another one of Klaus’ brothers was even stranger, though. Although he’d been born the same time as the rest of his siblings, he still looked like a teenager. Klaus had told Dave that he could teleport, and travel through time. Apparently the latter of those explained his appearance, but Dave hadn’t yet worked out how.

Klaus hadn’t gotten to telling Dave about the rest of his family, yet, and the man looked forward to hearing about more of these amazingly interesting people Klaus called family. He was happy to listen, always, and he hoped that Klaus knew how much he cared.