(If we could all pretend today is the 9th, that would be lovely.)

I Knew It From the Start

Listen. I love Klave with my whole heart. Every relationship in this show is fantastic, but there was never a contest. 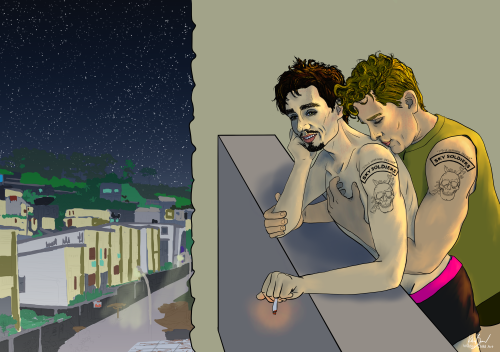 As some (maybe all?) of you may know, I also write fan fiction over on AO3 (my username is TwistedIllusions) but I’ve been kind of stuck in a rut for it. It’s been nearly a month since I’ve touched my current WIP (not that I don’t want to! Just haven’t had the motivation) SO today I decided to draw a snapshot from it for my countdown. Allow me to introduce you to Klaus Hargreeves with his daughter Riley from my stories:

What I Never Knew I Always Wanted

I Promised That I Would Never Leave You

I think this turned out super cute. So I had to share! Sorry it’s kind of random haha but if you like it, be sure to check out my stories as well! If you do, I would love to hear what you think!! :)

Peep my guy in the back who’s checkin out this random man who just died on the ground for a undetermined amount of time whilst yelling at a giant gorilla man. 😏

Dave: *grabs his hand* now what?

Klaus: Nothing. I just wanted to hold hands

Please just bring my boy back or at least AT LEAST give us a spin-off for the ten months in Vietnam. PLEASE. I WOULD WATCH IT

So, lately I’m seeing a bit of frustration in the TUA fandom directed towards Klaus/Dave fans. Not a ton, mind you. From what I’ve seen the past month or so, the fandom has been incredibly positive and excited and it has been such a lovely place to be. (Every now and then I see posts where people complain about all the negativity and I have to scroll through 10 pages of happy, excited fans to find one post where people are upset about anything. Calm down, guys. We’re in the good place right now.) That being said, there was one post I saw that I do want to comment on.

The post was something along the lines of: Klave fans just think the entire show should revolve around their ship.

Now, while I don’t think it’s a stretch to say that Klaus/Dave fans would very much enjoy a show that revolved entirely around their ship (wouldn’t all shippers?), I don’t think anyone honestly expects the show to do so, or even for Klaus’s entire story to revolve around Dave. Or at least if there are those folks out there, they’re few and far between. Most of us don’t need that reality check about what the show is or will be. We just like playing in the hypothetical sandbox of fanfics, headcannons, and episode predictions. It’s fun.

That being said, it’s not unrealistic to expect or want Dave to be part of season 2. This man was the love of Klaus’s life, who he saw die in a horrible, horrible way. Klaus loved this man so much that he followed Dave onto the front lines of a war he KNEW did not turn out well for US soldiers. He kicked a 17 year drug habit just to see him again. He is still wearing Dave’s dog tags all the way up to the second apocalypse. Klaus’s live may not revolve around Dave, but Dave is still a HUGE part of Klaus’s life. It’s not unrealistic to expect the writers to address this issue again. It’s not unrealistic to expect some kind of reunion when they drop Klaus into a time period where Dave is alive and well and potentially about to get drafted for a very bloody war that Klaus knows he will die in.

Klaus: ok I’ll start. My name is Klaus, my eyes are brown and I accidentally time traveled back to the 60s where I fought in a war for ten months and watched the man I love die in my arms and no one tried to talk to me about it except the ghost of our dead brother

Vanya: his eyes are green

He had been sober for almost an entire week, and he has not been able to conjure Dave back. He’s dealt with agonizing withdrawals from the drugs (he still feels them, the need for a needle in his arm or some weed to smoke, but it wasn’t as bad as others day), and he’s been dealing with all kinds of ghosts screaming at him, begging for attention 24/7. He was tired; all Klaus wanted was to see Dave.

“Where are you Dave?” Klaus asked, but he knew that he wouldn’t get an answer. “Why don’t you come see me!?” He paced around his room, getting frustrated. Ben sat on Klaus’s bed, watching this happen, sadness in his eyes.

He ran his hand through his unruly hair. “Dave, please,  I need to talk to you! I need to see you again,” he said, desperation clear in his voice. Ben honestly didn’t know what to say, or how to calm Klaus down. He’s never seen him like this; then again, this was the first time Klaus was ever in love.

“I really need to see you, Dave,” he said, voice quieter. “I just…I can’t keep kissing strangers and pretending that they’re you.”

“Seriously, Dave, why don’t you show up? I-I can’t keep doing this, not without you.”

Klaus continued to pace around the small bedroom, completely ignoring Ben. He paused, and looked over to the bed. But Ben knew that he wasn’t looking at him. “Klaus, no,” Ben started, getting up to face Klaus. But Klaus was looking right through him. “Klaus, I know what you’re thinking. We both know that you can’t go back to drugs. Think about all of the progress that you’ll lose! And I–Klaus pay attention to me!”

“Ben, do you think…one joint wouldn’t hurt right?” He started itching closer to the bed.

“Why did I even ask you, you’re a ghost, and if I remember correctly, I know what my body can handle. And if I say I can handle one joint, then I think I will be fine,” Klaus reassured. Moving the mattress, he expected to see his stash. Instead, all he saw was nothing.

“Five and Diego moved it when you first started to get sober,” Ben reminded (honestly, Ben forgot about this himself), “you’re not going to find anything.” Klaus stared for a few minutes, thinking. Then, he gave Ben a smile.

And rushed out of the room. Confused, Ben quickly followed wanting to know what his brother was up to. He watched as Klaus entered Five’s room, and gave him a glare.

“Klaus, stop it! I know you’re upset, and you’re tired about everything, but please, don’t throw all your handwork away.”

“Ben, we both knew that I was going to relapse. I had a good run, but now I need to ransack Five’s liquor cabinet.”

“Klaus, please, I know how badly you want to see Dave, but getting drunk or high or whatever isn’t going to help!”

Klaus paused for a few minutes, then gave a small sigh. “Listen, Benny, you’ve been with me through thick and thin, no matter what I did, and I appreciate it, I really do, but you can leave now. You don’t have to stay with me, you never did.”

Ben stared at his brother, not sure what to say. As Klaus broke the lock on the cabinet (Even though Diego just told him to get rid of all the alcohol like they did with the bar, but Five persisted with just a lock, saying that would be fine), he opened it up, and reached for one of the bottles.

Ben didn’t know what to do. So, he did the first thing that came to mind. He tackled Klaus.

And landed harshly on the ground.

“What the hell Ben!?” Klaus said, then paused. Ben tackled him. Ben tackled him. He always struggled making ghosts corporeal, and was rarely able to make it work for Ben (even when he did, it was for a short amount of time. It took too much of Klaus’s energy for him to keep him corporeal for so long). So why now, of all times? It wasn’t like Klaus was trying to make Ben corporeal, so why was he?

Klaus took a deep breath, and took a chance.

When they finally reunite:

Dave: what have you been up to honey? :)

Klaus, standing in front of thousands of his cult followers: nothing

Klaus: Dave, do you like me? I’ve been sensing some vibes lately.. 😳

We joked about Klaus starting a cult then it happened.

Lmao what if Klaus levitated and had telekinesis???? Wouldnt surprise me honestly, and you’ve got all those things with the floaty shit. Lmao!!

What if…what if dave came back??? Lmao that’ll be iconic, ahdksj imagine dave comes back and klaus is with him??