Tim: trust me, i know what i’m doing!

Kon: not even God knows what you’re doing

I saw the post and immediately thought of these two lmao,, Tim has had enough of this tomfoolery

Grace Drake-Kent believes there is only one true downside to having two dads–The endless dad jokes.

“I dunno, babe,” Kon chuckles, “I never trust stairs. They’re always up to something.”

“Or lead to your down fall.” Tim snorts. Grace rolls her eyes at their dumbness, stabbing a piece of broccoli with her fork. “You good there, Gracie goo?”

“Trying to remember if Aunt Cassie said the Themscyria thing was only for summers or if I can move there.” The 16 year old smiles at her dads, one they both have used on each other over the years. I might be joking, but do you really want to keep pushing and find out how serious I am?

“You’d miss Dahli and Asha too much.” Tim points out, “Even if you didn’t miss us like you always do.”

“Nutter Butter,” Kon snorts, “You almost broke your dad’s ribs last time you got back, hugging him so hard.”

“Felt like I did.” Tim laughs, getting up to head to the kitchen. He kisses his husband as he passes by, “But your dad gave me some life saving kisses to help.”

Grace rolls her eyes as her fathers’ kiss again, “You two are the reason Aunt Cassie doesn’t trust men anymore.” 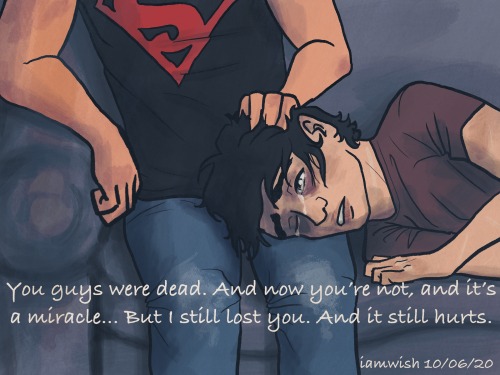 Don’t worry I hate myself too

kontober day 19 piece without the text cause I liked it:) 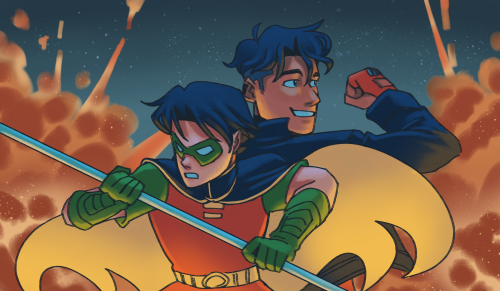 “Blood son my ass” Tim hissed as the door opened with a click. The manor was quiet, it was delicate and unloved, and for those reasons he knew for a fact nothing had changed. Maybe he was dreaming, maybe Janet and Jack were just on another expedition.

No, this time they weren’t coming back, instead long gone, forgotten and already starting to deteriorate in their oh so lovely tombs.

The manor would be out of the drake name by the end of the month. He’d allow it to be sold fully furnished and he’d take only his parents belongings with him. Tim decided he’d donate prizes they’ve brought home from expeditions to museums, the clothes would be mostly donated, jewelry pawned, and the rest? Maybe a nice storage container.

Believe it or not, but time apart from the toxic duo was relieving. Tim couldn’t see the abuse till their passing, but now he felt like he could breath. It felt almost similar to the rush he first got as robin.

Right…robin. A lost title. Dead, just like the many other special things and people in his life. All dead and buried in the back of his mind, people and things he once cherished, unlike Janet and Jack.

No more isolation, no more punches or slaps, no more mind controls and manipulation. He was free, free of parental harm and supervision, maybe he’d throw a party? He didn’t know who he’d invite. The only ones he’d care to party with were long gone, his choices in people seemed to be instead dwindling.

“That’s why we make more friends, Timothy,” he mocked his mother’s voice. Only, in the ways she meant it, it wasn’t to make friends, just slaves and people to do ones bidding, mere pawns. It was tempting, too, maybe manipulation and abuse were somehow in his DNA, maybe he was more like them than he thought.

The boy plopped down on the sofa in the sitting room, stiff, barely used just like the rest of the house. He glanced around, noticing the way the doorways arched and the carpet caved in under the legs of the opposite sofa and the million dollar coffee table in front of him. There was a bar in the corner, still fully stocked with his mother’s champagne and his father’s brandy, when was the last time it had been touched? Silence settled in then. It was cold and brutal, yet comforting in a nostalgic way of his adolescence.

Tim felt a sudden sense of pride then. He’d survived. He was on his own, all alone, no longer a puppet to dead Janet, no longer a punching bag to Jack. “I won,” he stated to the house, running a hand through his overgrown hair, a smile curving at the corners of his lips. It was victory at last, he could almost taste it on his lips, cracked and brittled. It was the sour type of victory, the kind felt after revenge. They were dead after all, and the part of him that did love them, felt guilty for not doing more, but out of all the loss he’d faced lately, maybe these deaths he could alter into a slight win, rather than a typical lose.

“I won,” he restated, this time standing up and strutting over to the bar. He pulled out a bottle of champagne from the mini fridge along with a long glass. He’s done so all the many times before, pouring his mother a flute of champagne and his father a shot of brandy, only this time it wasn’t for them, and the alcohol wouldn’t be accompanied with loud fights and more often than not Jack taking it out on his son. He took his glass, champagne poured nearly to the brim.

“To the drakes!” The teen exclaimed with a grin, the liquid sloshing around as he raised the glass to no one. Tim took a glance around the room, giving each piece of furniture, wall, and conversation piece a lively and proud look before he allowed himself to continue, “may we all burn in hell.”

“Stand by You” by Rachel Plattern

Tim: Is this you or Bart talking

Tim: Kon, don’t freak out, but you’re losing a lot of blood.

Tim: Can you tell me your type?

Kon, bleeding out on the floor: C-cute smile… short hair—

I’m so glad you love them🥺🥰

Those videos name is edits and I love making them even if they are horrible..

And right now I’m making another one for Timkon and this is the intro: 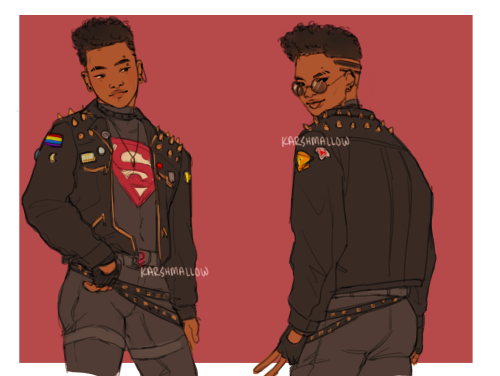 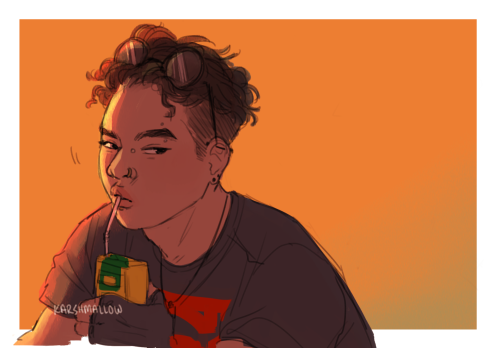 Kontober day 16. I would like to think kon cuts cassie’s hair in the summer so they have matching undercuts. 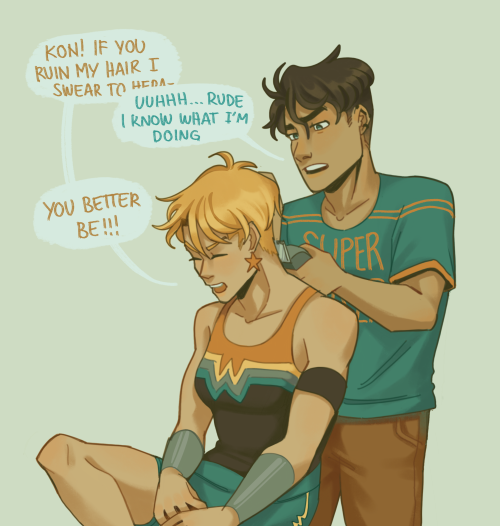 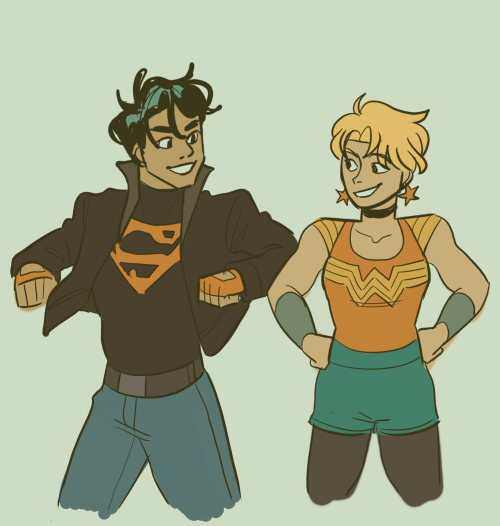 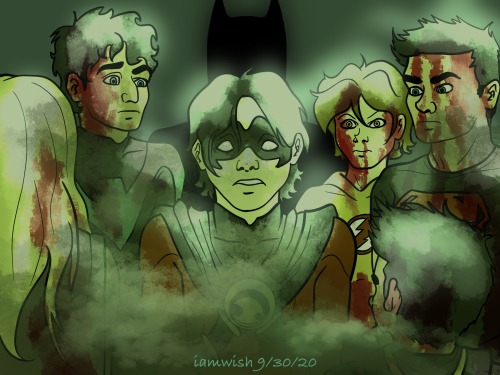 Did the artist here really draw this out, look at it and go “yep. That’s not gay at all.” And with the words too.

#asdfghjhgfdsdfgh, #i mean come on, #Kon is looking at him like he’s ready to pound him, #if you know what I mean 😏, #KonBart, #conner kent, #Kon el, #bart allen, #superboy, #impulse, #bartkon, #young justice
44 notes · See All
ashes-and-artsText

Kon and Bart, looking at Match and Thad: You can be better than this. You dont have to be a weapon. You can chose individuality, you can choose to have a family

Match and Thad: No, we’re superior to you, fuck you