Being a highly subjective assessment of one tiny corner of the interwebs.

Tell The World I Love You (Thai movie) was set to air this Thursday and… didn’t? Rumors are it’s getting a theatrical release in Thailand on April 6 now - contingent on C19 sitch of course.

Happy Friday to us! Whoa.

Links to watch are provided when possible, ask in a comment if I missed something.

You Make Me Dance

I wasn’t going to do this anymore, but at least these short series out of Korea don’t lend themselves to epic posts.

Look. It’s just. I HAVE THOUGHTS.

Korea is being very strategic in their execution of topes and I think it’s a marker of their intent to dominate BL. Or at the very least an interesting side effect of their late entry into the market. They are picking up and playing with tropes in a very intentional way. It’s markedly different from the hap hazard check-list style (with occasional parody) that we get from Thailand, or the cartoon jocularity murder-gay of Japan (capricious god of BL), or the tongue-in-check meets earnestness of Taiwan.

You Make Me Dance is doing BL tropes so very pretty. But simultaneously, kinda dirty too.

You Make Me Dance Episode 1-2

YMMD is a love story between Hong Seok (loan shark) and Shi On (student dancer). It’s also about the love of art and the passion that drives creators and those who experience and respond to their passion. Like all love stories, the drive is connection, but it’s on two levels when art is involved. There is not just a romantic connection to explore, but the intimacy of creativity and how it is received and absorbed. I’m not sure how deeply YMMD will go into is, but I’m excited to see them try.

Unexpectedly, YMMD launched with a take fated mates by talking about the red thread pinky-finger mythos. Shi On looks around on his bus and sees a stranger with his pinky finger up. They have a moment.

But the real twist comes later when loan shark Hong Seok is sent to threaten Shi On and ends up wrapping a red scarf around Shi On’s feet. So many parallels:

Then later we get Shi On hopping around, which was so cute and funny but is an allegory for the crippling nature of both fate and love.

I think I both bounced and clapped.

Honestly, if you have a physical trope like this one that’s all about body language, make a dancer do it. Very smart. This is such a childish innocent move and to have this sweet college kid give it out to a sinister loan shark when his life is on the line was kind of gut wrenching to watch.

Also note the servile level, emphasizing the differential power dynamic? So clever. Contrasted to earlier when Shi On finished dancing and is standing before him, above him, filled with the power of having touched him with his dance.

It also harkens back to the original pinky meeting on the bus and the red thread connection.

So this pinky swear was both executed and subverted, and you know I love that.

They ended ep 2 with a rooftop assignation combined with crash into me. They are moving this one along quickly, which they have to with so few episodes.

According to the series description we are heading towards forced proximity (cohabitation) which is a shorthand for forcing intimacy when you don’t have a lot of time to develop the story.

Korea seems well aware that their curtailed time frame for these BLs means they need to crib in certain tropes to get any kind of character development (Color Rush used fated mates, To My Star and Wish You used forced proximity).

I’m really looking forward to next week to see where YMMD goes with this. Since they have elegantly danced with all the tropes they picked up so far, forced proximity should be a waltz for them.

Yes I am going to use dance metaphors and terminology with these recaps. Gotta put that dance minor to good use somehow. Right? 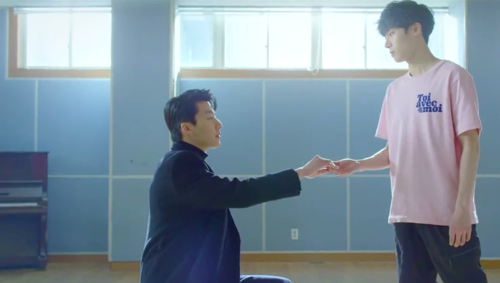 The red scarf of destiny has a really nice ring to it, honestly.

You Make Me Dance has mentioned red threads and I am instantly sold, no denials. That’s all it takes. Red threads and ballet and destiny. Who could ask for more?

The first moment when I finally, truly, started to enjoy the show.

… Yeah, took me a bit to get there, honestly.

Korean BL Color Rush leaped onto the scene at the VERY end of 2020 and blew my mind. Despite being a typical K-BL short run of short episodes, it was given more legs than 2020′s Mr Heart or You Wish with a STRONG core concept and 8 episodes of 15 minutes each. Thus Color Rush (with a total run time of c. 2 hours) felt more like a movie than a series and managed to satisfy watchers because of this cinematic approach.

It broke ground in many ways:

Thai BL may be my stan, but Color Rush is my bias, and it tops my list of BLs to beat going in to 2021. Okay I’ll stop using K-pop lingo: basically I really flipping LOVED COLOR RUSH. 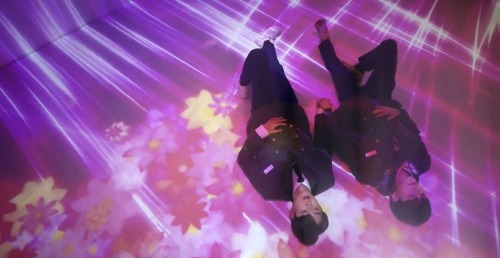 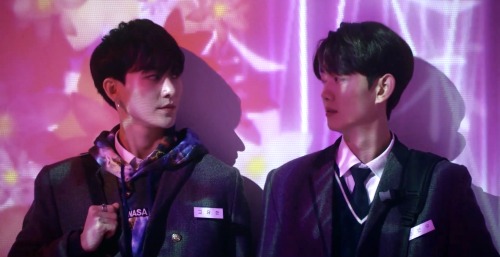 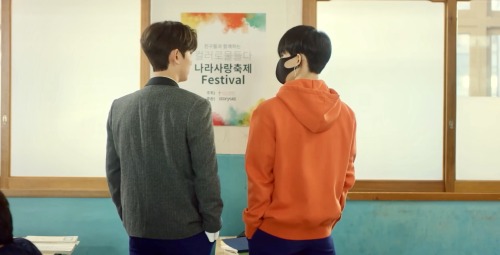 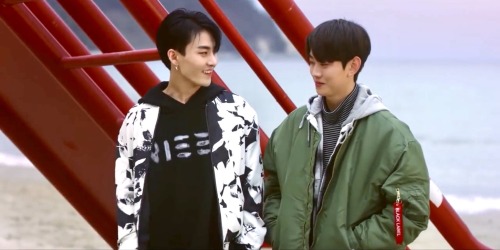 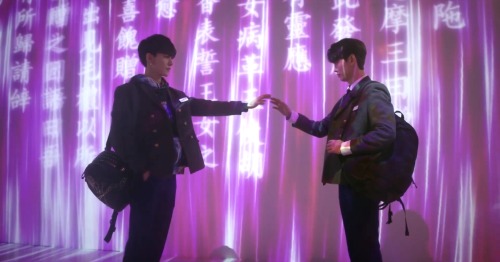 Kang Seo Joon’s panic attack when he heard the rock was… a moment that I loved.

But it was a moment that I wanted to have happened in a more serious drama.

I loved that moment. The way he froze but, even more, how Han Ji Woo responded.

He went right outside to see what happened and to make sure everything was okay. And when it wasn’t, he helped to fix it.

Aaaand then the pimple appeared and all my happy vibes went poof.

This. This is why To My Star is giving me such weird vibes!

To My Star is giving the strangest vibes and energy.

I want to like Kang Seo Joon a lot more than I do. I can’t decide how much of him is real and how much is a facade that he’s putting on because it amuses him. And that kind of character is always rough because do I like the character or the facade and, sometimes, it turns out I liked the facade a lot more… which is often a problem when they put the facade away later on in the show.

On the other hand, I love Han Ji Woo. He’s sensible and annoyed but sympathetic and I really like him. He’s refreshingly honest.

Can’t wait to see them get together… somehow.

Korea just decided “Hey, if we’re making BLs for people who are already BL fans, why don’t we just… turn fanfiction into a show?’ and I love them for it.

Do I think it’s an accident that Yoo Han is wearing black and white in the final episodes? Absolutely not.

This is such a wonderful show. 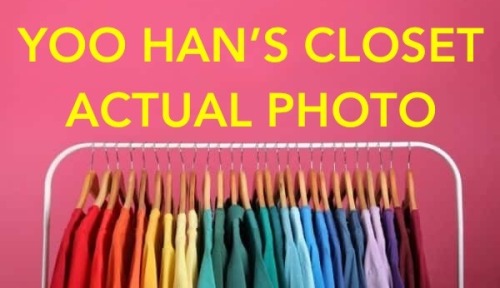 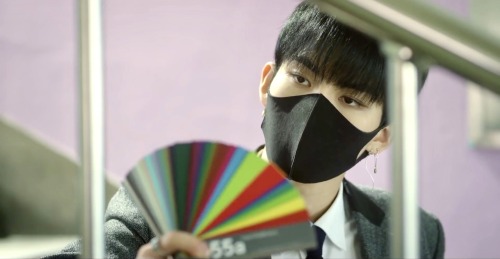 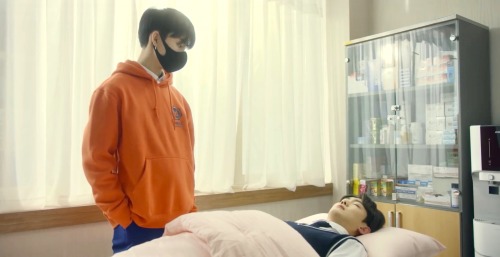 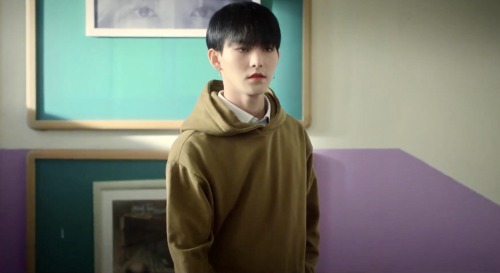 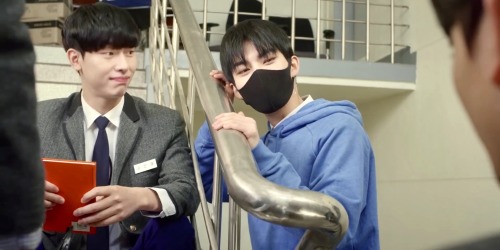 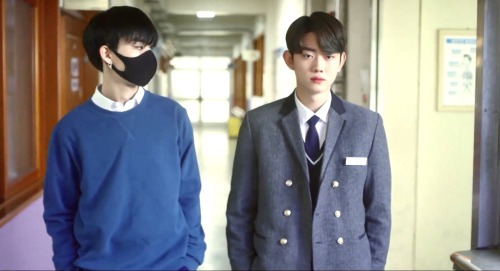 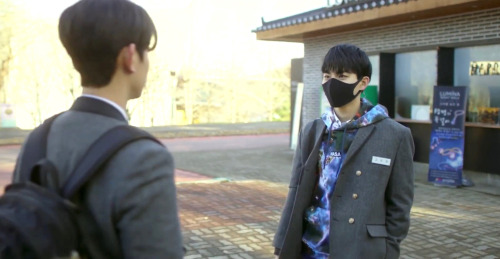 Color Rush tells you not to be scared of your desires because there’s someone who shares that desire out there, someone who will share with you and care with you and love you for the parts of you that you’re most afraid of, that you most dislike about yourself.

Color Rush says the your fear can be overcome with love and that, to someone, you are the most important piece of their world.

Probes are the people who accept themselves against all odds. They’re the ones who know who they are, they love themselves for who they are. They’ve seen what the world says about them and those they love and they reject it out of hand.

Yoo Han loves himself for who he is, even when who he is doesn’t fit into everyone’s expectations. There’s pain there, lurking behind that acceptance, but he knows that there’s nothing wrong with who he is.

Monos are the ones who see what the world says about them and believe it. They see the worst in themselves and they fight it. They try to be ‘normal’, they deny themselves their want and their love out of fear.

Yeon Woo has spent a lifetime hating a major part of himself. He was taught to and he believed it. He fears himself and his wants and his love so deeply it lead him to hurting himself to try to escape his own feelings.

Together, and only together, can monos and probes support each other, can find their strength in each other.

Yeon Woo finally accepted that he is not the worst parts of himself.

Yeon Woo finally accepted that there is joy to be had even in your fears.

Yeon Woo finally saw that he is not alone in his obsession and his love.

And he saw that a cage isn’t a cage when it makes you both free.

i seriously can’t believe no one on YouTube has cut Color Rush against a Boyz song. Or one of Hyunjun Hur’s own pieces?

Yeah yeah he left them. Injured or otherwise, he was criminally under-used and obviously it was the best career move for him. I just love the irony of fandom getting clippy and snippy with a fan vid MV of an ex-idol’s new career juxtaposed against his previous one.

I want someone to do it with Jinyoung + GOT7 + He is Psychometric too.

Not me being sad cause there’s only two episodes left of color rush and I’m here bought to have a mental breakdown cause I want them to fucking hug each other and not let the fuck go 😭😭😭 like come one am I the only one who thinks that. I don’t even care if they don’t get together I want them to hug and shit and fucking be happy 😭 but I wonder what will happen is Yeonwoo actually kidnaps Yoohan like I’m curious 🧐

Okay but can we talk about what Yeonwoo said to yoohan my heart exploded but now I gotta wait a week for the next episode 😭 ugh I wanna know what’s gonna happen next. Like I don’t wanna anything for those who didn’t watch it it so ima shut up