Don’t think about baby Shigaraki climbing into bed with Kurogiri after a nightmare about his family.

Don’t think about baby Shigaraki hearing a dog bark and bursting into tears right there in the middle of the sidewalk, so Kurogiri warps them both back home and sits with him on the couch until he can calm down.

Don’t think about baby Shigaraki flinching and wincing around every adult male he interacts with because no matter what his master and Kurogiri say, he knows he’s a bad kid and bad kids get punished and he’s waiting for the first time he steps out of line and gets the belt from either of them.

Don’t think about Kurogiri having Shigaraki help him go through his closet to dig out every single belt he owns and then having Shigaraki disintegrate them to show him that he has power now, and he doesn’t ever have to let anyone hit him again.

Especially don’t think about Shigaraki, now armed with the memories of Kurogiri’s love and his own budding feelings for the rest of the League, revving up to break Kurogiri out of prison and get his dad back, get the one good thing about his childhood back in his life again – only to learn Kurogiri is a nomu.

That nothing he did was of his own will or his own decision.

That none of it was real.

Sorry if this is bad, I didn’t have much inspiration today

Tenko, no, Tomura writhed around in his bed, pulling at the artist gloves that seem to caress his hands. He doesn’t like them. He doesn’t like them at all. He supposes one would expect that, since he’s never had to wear them before. He’d been training himself on finger dexterity but until he mastered sleeping with curled fists he wouldn’t be able to sleep without his gloves. Oh how he loathes them.

He gets up to check the time. 3:00 AM. Three hours from the time he was supposed to wake up. Sensei said 6 hours was a good amount of time to sleep for the eleven year old, not too little so it wouldn’t damage his brain cells much, but enough to train him to not need rest as much. Tomura didn’t really like it considering that he woke up in the middle of that time anyways, but he’d go along with it for now. When he became king he could make his own sleep schedule and not have to listen to Sensei’s words all the time. Not that he minded too much. Sensei was kind to him, Tomura just preferred to go at his own pace.

I hope we get to see what’s been going on in Shigaraki’s head this whole time. What all he’s dreaming about. If I see a single memory of little Tenko with Kurogiri I’m gonna cry.

#mha, #bnha, #boku no hero academia, #my hero academia, #eraserhead, #shouta aizawa, #aizawa shouta, #oboro shirakumo, #eraser head, #shirakumo oboro, #loud cloud, #kurogiri, #yamada hizashi, #hizashi yamada, #present mic
41 notes · See All
shirakumohnoAnswer
au where both Kurogiri and Eraserhead turned to black cats, so shigaraki grabs the golden eyed cat and flees while the cat with a grey ruff around it's neck is taken back to class a dorms. ...Except the grey ruff is not a capture weapon but kurogiri's neck brace, and the gold eyes shigaraki thought were kurogiri's are actually the color of eraserhead's goggles. Shenanigans ensue.

Purrogiri refuses to talk to Koda, and the class writes it off as Koda’s abilities not working on “Aizawa” for some technicality in quirks. While he loathes being surrounded by annoying and loud hero hopefuls, he does quite enjoy their affection. And can’t help but care about them too.

Catzawa finds himself in a very precarious situation surrounded by villains, but at least their own mistake is keeping him alive. He tries to keep up what dynamics he believes the league to follow, but of course has a few missteps here and there. It doesn’t seem to matter too much though, the league is mostly interested in (save for Toga taking care of him whenever she can) tracking down who did this.

In the end, they both become as affectionate as how they’d treat their families to their enemies.

How does it end?

ITWD!Kurogiri: Though…it seems that my counterpart knows something. I’m not sure if it is good to ask now.

#ultimatum au, #itwd au, #uh oh, #kurogiri, #bnha, #mha, #boku no hero academia, #my hero academia, #oboro shirakumo, #itwd kurogiri is not shirakumo, #he is his own person, #shirakumo unfortunately died like he did in canon and stayed dead, #ult kurogiri on the other hand...., #whoops, #mineblocks303
16 notes · See All
shirakumohnoText

I need more goofy erasercloud aus. AU where Aizawa is an explorer and meets a creature more curious about him than he is about the monster. AU with their quirks swapped. AU where they are stuck as animals till a villain is captured and forced to turn them back.

Toga: Twice, please! You don’t have to do this!

Spinner: It had to happen, Toga.

Mr. Compress: There’s no other way.

Spinner: Yes he can.

Dabi: You can’t delay the inevitable.

Mr. Compress: It’ll be worse if you wait, Twice.

Shigaraki, to Kurogiri: I want a new league.

All for One: I want to kill everyone and take over the world!

They are with Tomura’s, yes. I’m not really sure where they’re at. I just need to warp them somewhere. -Kurogiri

#my hero academia, #bnha, #kurogiri, #i got so confused and had to stare at the word for like a good five seconds, #i'm going to sleep
6 notes · See All
chaoticccrackheadText

#league of villains, #my hero academia, #shigaraki tomura, #dabi, #toga himiko, #kurogiri, #spinner, #big sis magne, #bnha twice
64 notes · See All
smolangoraText
#kurogiri, #bnha kurogiri, #oboro shirakumo, #bnha, #my hero academia, #mha fanart, #bnha spoilers, #my hero academia spoilers, #boku no hero academia
64 notes · See All
theravencawsatmidnightAnswer
So hear me out here. Reader is part of the league. They end up being super protective of Mustard (the middle schooler who was in the league before he was arrested) and toga because they see them as children. They go big sister mode and makes them cookies n lunches etc. Gets into straight up fights with Muscular and Dabi when they try to tease Mustard or Toga. Like reader goes Feral goblin lol They are heart broken when mustard is arrested.

Kurogiri has, on multiple occasions, attempted to teach Tomura Shigaraki to play chess, as befits a future criminal mastermind.

Shigaraki is utterly terrible at it, incapable of remembering how the pieces move and throwing the biggest pissbaby fits when reminded he can’t move his rook that way.

It typically ends one of three ways:

1) Shigaraki flipping the board.

2) Shigaraki decaying Kurogiri’s king and declaring himself the winner

3) Shigaraki accidentally decaying his own pieces, and THEN flipping the board.

The only other member who plays with Kurogiri is Mister Compress and half the time he’s rearranging the board when Kurogiri isn’t looking. 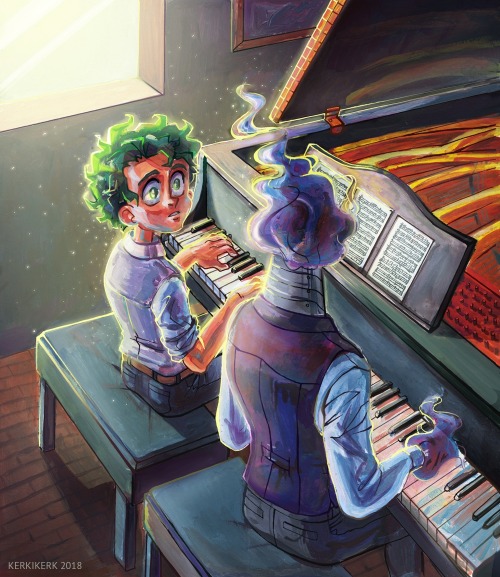 #boku no hero academia, #bnha, #mha, #villain deku, #my hero academia, #kurogiri, #villain midoriya
124 notes · See All
league-of-villians-headcanonsAnswer
So what if shig/dabi/kuro/compress had a tough mission today so they just wanna sleep when they get home but their s/o is being extra needy and keeps trying to grab their attention by repeatedly poking their face while they try to sleep, repeatedly calling out to them in a whiny voice, and other annoying stuff. How would they deal with that

Shiggy rolls over on top of you and falls asleep immediately. Squirm and struggle all you want, he’s out cold.

Dabi grabs your arms, pins them to your side and wraps his arms around you, big spooning you until you’re both asleep.

Kurogiri might just warp you out of his room if he’s really tired.

Mr. Compress, “Darling, if you don’t let me sleep I might just put myself in a marble to get some shut eye.” “You wouldn’t dare!” “Try me.”

#shigaraki, #dabi, #kurogiri, #mr. compress, #lov headcanons
48 notes · See All
theteapotofdoomAnswer
Baby Tenko was probably really colicky. So when he wakes up crying at two in the morning, Kurogiri and Sako take turns cuddling him back to sleep. They keep flip-flopping between "It's okay, darling. Hush, baby" to "Sweet lord, child, shut your eyes! You're killing us!"

BACK AT IT AGAIN WITH BLACK MAGIC PARENTS + BABY TENKO AU!

Yes, this is so sweet, I love this energy. They’re just young parents doing their best with their chaotic smol fluffy baby boy. They’re such a good team though! They do be snapping sometimes though because Tenko is a loud bean. He demands attention!!!

Be kind to your parents Tenko, they both need their beauty sleep.

#my hero academia, #black magic, #shimura tenko, #shigaraki tomura, #kurogiri, #mr compress, #atsuhiro sako
22 notes · See All
league-of-villians-headcanonsAnswer
Heyy I was the one who asked for the lov + katsuki fave punishment and I'd love if it were in the ABO sense!!! 🙆🏻‍♀️

Shigaraki: Tie them up, leave them in the closet for a few hours (twenty minutes if what they did wasn’t a big deal). He’s not a monster, so you can have some blankets and stuffed animals to keep you company. But you need to spend this time sitting there and thinking about what you did. Not taking a nap. “You can come out when you’ve learned you’re lesson.” “Okay I’ve learned my lesson.” “… It’s been five seconds, no the fuck you haven’t!”

Dabi: Spanking for something small they did, but if they messed up big time, guess whose getting yanked around on a leash all day? Guess whose wearing a collar for a week? “That’s right, you fussy little brat. And it’s staying on until I say so.”

Spinner: He’s not too experienced with stuff like this, so he consults the internet. He tries to ask the others for help, but doesn’t really wanna do what Dabi suggests. Internet suggests talking with your omega first, explaining why it’s wrong, and that if you do it again, it’s gonna be a more formal punishment. The internet recommends taking away unnecessary shopping privileges if you’re mated to the omega. Spinner will typically follow that.

Twice: Is an omega. Does not deal well with any version of being punished. He just wants to be held and told he’s a cutie.

Kurogiri: Gentle discussion on what you did wrong and why it’s wrong. He’s not much of the disciplining type, he tends to treat his omega more like equals.

Mr. Compress: Same as Kurogiri, but he’s a bit more old fashioned and he might “ground” his omega from leaving the house for a day or two if they did something dangerous or super disrespectful like flirt with someone else in front of him.