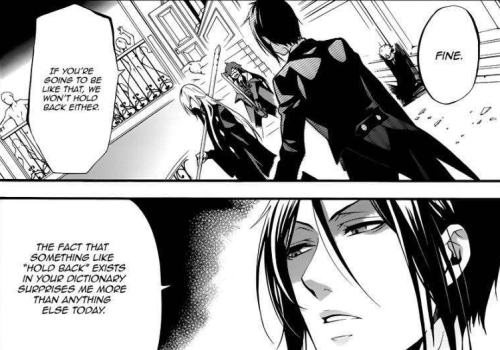 I‘ll be honest it‘s kinda funny how black butler is still SO popular to cosplay (in my country at least, our cons are full of bb) but the fandom is basically dead? Is it just the character design or the “nostalgia”? 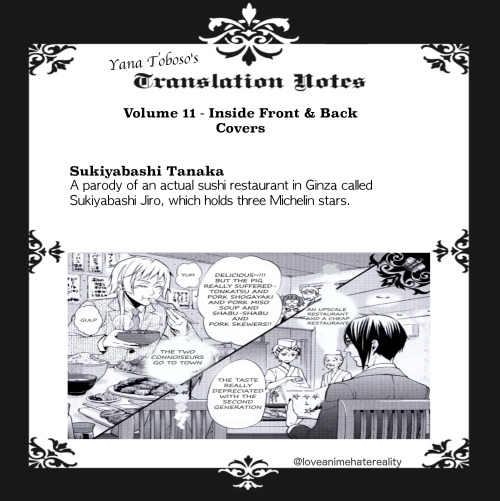 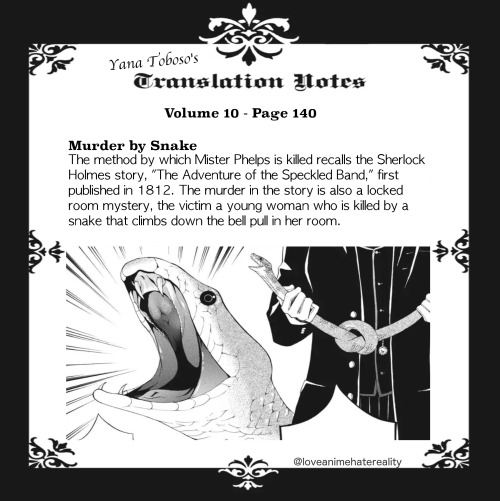 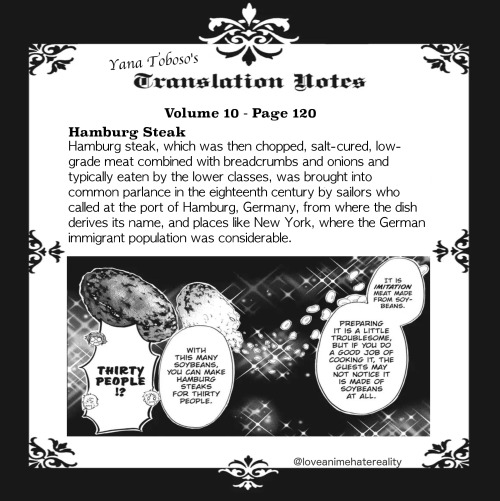 Black Butler #324 - They ALL want to so badly. XD ~ LoveAnimeHateReality 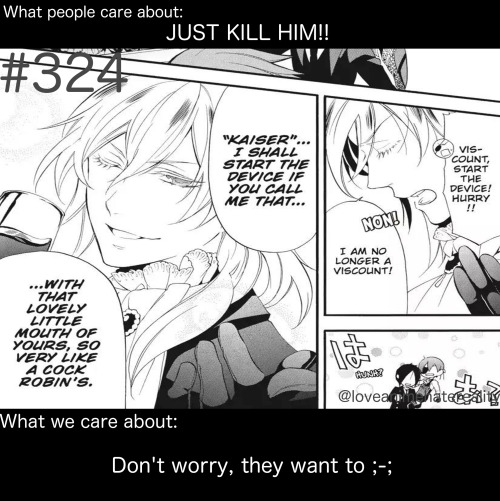 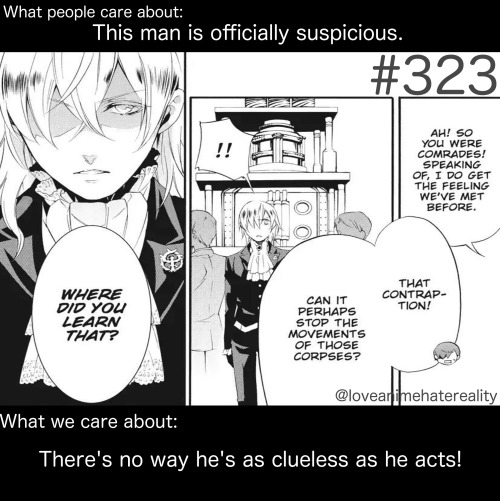 Black Butler #322 - It’s funny as hell because of Sebastian’s actual reaction! This coming from a demon who isn’t supposed to have human like emotions. XD ~ LoveAnimeHateReality 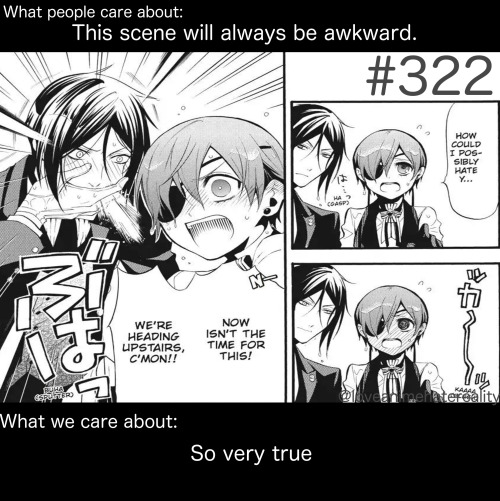 Ahh Bocchan. Well, Bocchan can also be translated as “Little Lord” and Sebastian does say, My Lord. I think it’s appropriate for this time and you’re not wrong! Goshujin-sama is what wives call their husbands as to show them a great respect, it can also be translated to master. But I do believe Bocchan is the most adequate meaning to it.

#bocchan is the name of my cat actually#hehe#black butler#kuroshitsuji
0 notes
flus-forest
Text
Cream and Sugar - FlusForest - Kuroshitsuji | Black Butler [Archive of Our Own]
An Archive of Our Own, a project of the Organization for Transformative Works
archiveofourown.org 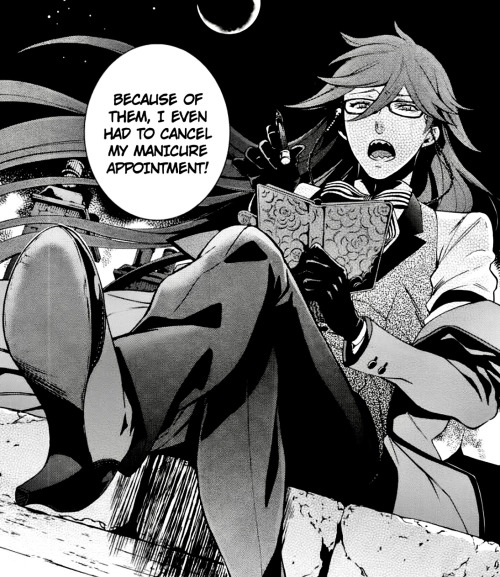 So I think we just got bards last name? I’m not sure, it could be an undercover name but there would really be no reason for that since he’s not important socially and would have no reason to have an alias so-

Anons, dear anons of mine, I know you may believe I’m a pro Japanese speaker, but that’s not like it. I know you’re wanting me to translate the whole manga to you, but I can’t. I don’t believe myself being good in that matter, because I may be certain and sometimes no. So maybe in the distant future I would take it into consideration, for now I can’t. Got my life, my little ones(niece and nephew) to look after, a college carreer of French language and many other things, so little time to focus on a translator. I can, however, help with short sentences. You can always ask me what does something mean, but not the entire manga.

I’m so sorry, dear anons, but I can’t help in that matter.

Bard’s quick thinking prevented Lau from being separated from him (for now), but I can’t help worrying that his time in the sanatorium may trigger an actual PTSD attack…one that would be much harder to control. 😣😣😣 Let’s hope he and Lau make it out of this unscathed!

Oh no you’re not bothering me anon-san!

Let me explain, Grelle talks in Onee Kotoba (Older sister speech) because she’s a lady(well I know you may think Grelle is a guy. Biologically yes, but she wants to be a lady) So she speaks like how a lady will speak. Very feminine, and Grelle doesn’t have harsh speech. She won’t go throwing harsh words around, because that’s not girly like. So she won’t use boku or ore. Atashi is a way of watashi, but an informal way, that it usually used by girls, it’ll be rare the case of a guy using atashi, they use between boku and ore. The very, very formal guys, like Sebastian use watashi, since they’re just so formal and will never address themselves in boku or ore.

Grelle uses atashi to refer to herself.

Sometimes I randomly write extremely short stuff about characters having extremely precise feelings I can’t name so have this about the Phantomhive brat:

“He’s tired. Not the usual “ah, terrible sleep last night” exhaustion, no- the kind of fatigue that comes from a lifetime of not being allowed to want, to need a break and then suddenly the entire world starts acting like you were never denied the right to breathe and it leaves you panicking four hours on end and you don’t let yourself rest because you don’t know if you should trust it or if the air in your lungs will be taken away again. It’s a feeling- an experience too big for his body and every second of it makes his bones ache with something his brain is too sluggish to name.

#hi it's me cangrellesteponme and i live projecting my pain onto fictional characters that deal with it worse than i do :)#kuroshitsuji#ciel phantomhive#black butler#ignore the stupid typo in the first tag thank youuuu
6 notes
plague-of-insomnia
Text

This panel seems to heavily imply that Ron is referring to Bard as a patient who has been told they’re going to die soon, but I think it’s a case of misdirection.

Yana wants us to think that, but I believe that Ron is actually talking more broadly about the blood banking mission/investigation at the hospital, and how they’re going to “set things right” (by “returning to society”).

While I do believe Bard (and the rest of the servants) will die before the manga ends, I honestly would be disappointed if Bard bites it before the big battle(s), especially after seeing how well he communicates with Sebastian. (Remember “collect the wages”?) I think it would be narratively unsatisfying if Bard died too early.

(Ofc, Ron could be talking about how Bard will die in the near future, but not in this sub arc. We don’t know how far their death records go, after all…)

Sure, I can help with that!

He always says: Watashi wa akuma de shitsuji desu kara” The correct way is I’m simply one hell of a butler” But he also makes the emphasis many don’t pay closer to his actual context of the phrase: “I’m a butler and a demon”.

Because desu kara(ですから) is a an emphasis to what something else some else is. Sebastian is meaning that he is both a butler and a demon, but people don’t pay closer attention to his context. So I like to think, Sebastian is always saying his true identity but people don’t get his real meaning behind those words.