I thought demon!Agni would be ✨hot✨ and I am SO right so far. So fucking right.

So have a sneak peak. As a treat.

I think I’ll be fully deceased before finishing this. Please treat our collective husband well when I’m gone.

#i am also giving him the white eyelashes he deserves for once, #this man, #how is he so hot, #kuroshitsuji fanart, #kuroshitsuji agni, #don't mind me questioning my asexuality over 2d men
4 notes · See All
cangrellesteponmeText

anyway have a nice day–

Agni: wha- why would you give a child weapons?!

Sebastian: there’s a lot of creeps.

The softest man in the entire world.

Made of love and holiness.

my hand: I do not see it, the hair will flow in the wind, as it should

Drawing him was a struggle (it took me, like, 20 minutes, but it was 20 exhausting minutes ok), I hope he doesn’t look like a completely different person????

Anyway, this man is perfect, I love him, The Chapter never happened :)))))

Me when I get to write the line:

Agni with a titi window 😔

The fact that Agni was 29 when he died still keeps me up at night.

My coloured MerMay piece is done. So much blood, sweat and tears went in to this colouring… seriously. My PC froze on the back end of colouring work, and I had a full blown panic attack thinking it was hours of my hard work gone. (Must remember to ctrl-s more often!) Much thanks to my fiance and @peonacotton for keeping me calm when I went full meltdown.

Thanks to everyone who loved the line art, and I hope my colouring skills do this justice lol.

If anyone is interested I now have a Ko-fi, and I’m open to taking on some commissions, as I still have another month of lockdown to go. Drop me an ask for prices :) https://ko-fi.com/ragbabyart 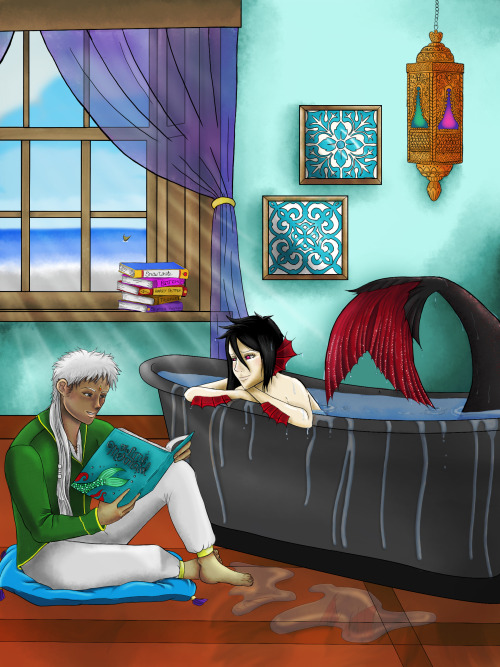 I created this for @bun-o-ween after reading her prompt for Agni and Soma in LPM, my favorite of her current writings. Imagining Agni flustered was trop délicieux to pass up.

Son of the Deceased

Lady Elizabeth was understandably upset over the news of what had really happened to Ciel Phantomhive, and at being suddenly engaged to another. Unable to be consoled by any of Paula’s efforts, the marquess’ daughter finally sent the maid out of the room in a fury. As she left, Paula had seen Prince Soma walking in the opposite direction towards Miss Elizabeth’s room, and she hoped that the Bengali prince might do her lady some good.

Without a noblewoman to attend to and no chores to be done at the moment, Paula walked outside, thinking to benefit from sunlight and fresh air. She stood with her back against the closed door of the manor, shutting her eyes and soaking up the warmth of the outdoors. She stayed that way for a good five minutes before she heard footsteps nearby. Her eyes snapped open involuntarily, expecting a confrontation, but she was relieved when she discovered it was only the Indian khansama.

“Miss Paula,” Agni came to her side. “I saw you leave the manor, and with Prince Soma keeping Miss Elizabeth company I thought it best to check on you. You seemed distressed, what with everything that has happened today.” the man spoke with a furrowed brow.

Paula smiled. Agni had been most valuable since the day she met him, the day Sebastian gathered those closest to Ciel and informed them of the earl’s lost memories. Since then, no matter where they were, she saw him always protecting others around him. This calmed her around Agni, unlike around Sebastian. “I suppose I am fine,” she said. “I only wish I knew how to comfort Lady Elizabeth during this time. She loves her cousin, you know. His promising her to Prince Soma without any sort of warning is undoubtedly breaking her heart. I have high hopes that your Prince is cheering her up right now, though. Both of you bring so much happiness to others.”

Agni turned slightly red and smiled in gratitude. “I am humbled that you think so, Miss Paula.”

“I prefer simply being addressed as Paula, Agni,” the maid replied. “Since we will be working together for the same household in future, I should think we ought to learn to speak comfortably with one another.” Paula clasped her hands together and smiled optimistically. “We have so much to learn from one another, will be friends in no time!”

Agni nodded, and held out his hand to her. “In that case, I believe I should show you how to make curry. I am sure Lady Elizabeth will like it once she tastes it.”
The two turned to enter the manor once more when Paula noticed a cab coming towards the estate. She and Agni stopped moving and watched it as it followed the path and came around to where they stood. The cabby pulled the reins, the horse slowed his trot to a stop, and the door to the carriage opened to allow a woman with a small baby to step down to the pavement.

"Why… Maria?” Paula asked incredulously. She recognized her would-be sister-in-law, of course. Grief over the death of Fred Abberline had transformed her: her blue eyes were full of sadness, her brown hair had lost its shine, and her clothes looked as if she had been wearing them for days, yet Paula could still recognize her.

“I’m sorry, Paula, I’m so sorry-” Maria began before breaking down in tears. She reached for Paula’s arm and grasped it tightly.

“Whatever is the matter? Aren’t you well?” Paula asked, thoroughly alarmed.

“Paula… you need to take my son!” the woman implored through shaky breaths. “Edward is taking me in, but he cannot take the baby. I cannot take care of this child, Paula. I can hardly do anything. Every waking minute of my life is consumed with grief, and no child should be raised that way.” Maria extended her arms holding her baby to the wide-eyed Paula, silently begging for her to take the child. “Fred and I had planned for you to be the godmother long before either of us thought you would ever find yourself in this situation; please, your brother trusted you this much.”

Paula, on the verge of tears herself, took the baby boy in her arms and rocked him gently. "Take care of yourself, Maria, and tell my other brother that I miss him.” the maid gave a weak smile at Maria, who nodded wordlessly before hurrying back into the cab. Paula watched the horse trot back the same way it had come, lost in her thoughts before a cough reminded her that Agni was still present.

“Fred Abberline was your brother?” the khansama inquired in surprise.

Paula nodded her head once, fixing her eyes on the baby she held. “He and Edward are twins, my older brothers,” she explained, not looking at Agni. “They both went to work for Scotland Yard, but Fred was killed.”

There was a moment of silence as Agni searched for the right words. Before he could speak again, the door to the manor opened and out stepped Lady Elizabeth and Prince Soma. They seemed to not notice the baby at first.

"Paula? There you are, I was worried after I asked you to leave, and I’m sorry for-” Lady Elizabeth’s apology faded out of her mouth as she realized what Paula held. “Who…?”

"Lady Elizabeth, Prince Soma… this is my godson,” Paula introduced them in a rather uncertain voice. The baby, who had been sleeping, suddenly began to stir, somehow freeing an arm from the swaddling blankets. Prince Soma reached out his hand to the child, touching the tiny hand with his forefinger. Almost instantly, the child wrapped its hand around the prince’s finger and held on tightly, causing the prince to laugh in joy. The baby boy looked at the four faces peering at him with curiosity rather than fear.

Paula smiled at her godson, leaning down to kiss the fragile forehead. Lady Elizabeth grasped her maid’s arm and gave her an encouraging look. “We will do what we must to help you raise him, Paula,” she promised. Agni and Prince Soma simultaneously agreed.

“Well…” Paula said at length. “I expect we had best be on our separate ways, us back to the Midford Estate and the two of you back to Lord Phantomhive’s townhouse. We each have a great deal of further change for which to prepare, I’m afraid.” 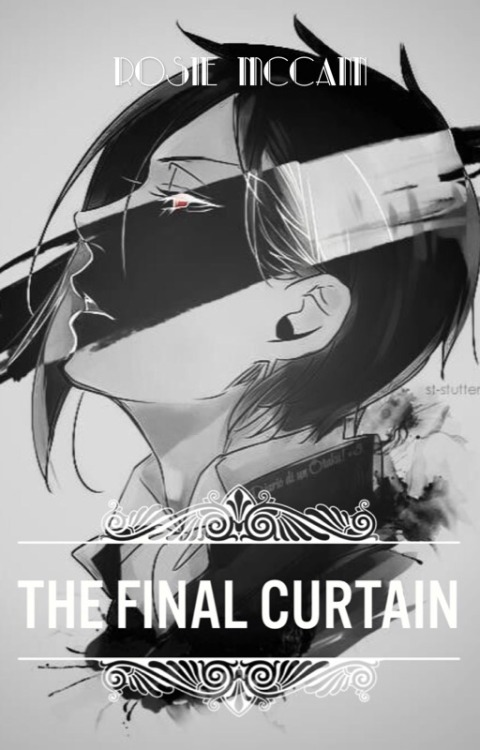 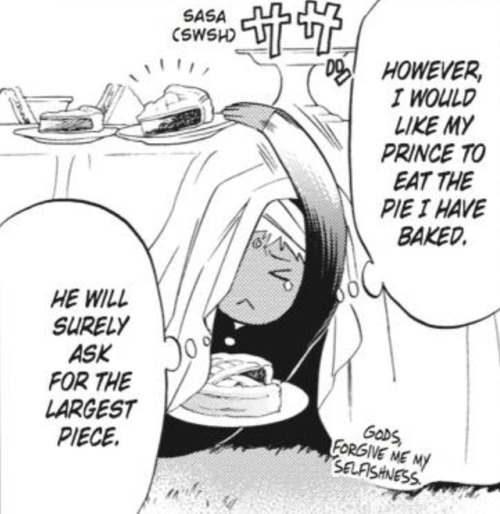 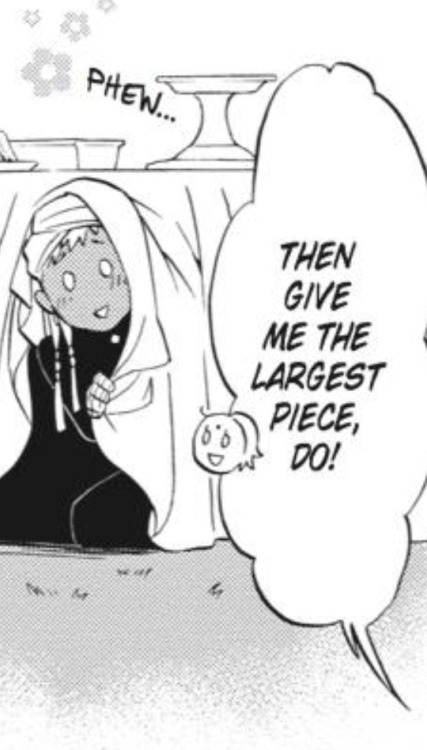 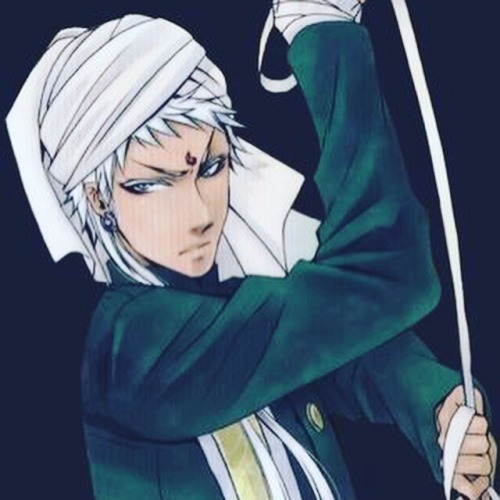 You know who was cute? Agni tbh. Especially back before he became the diligent butler. He was really rocking that bad boy life. 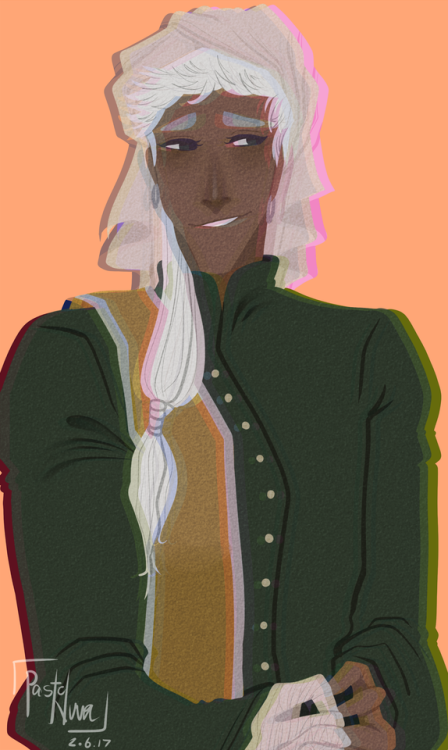 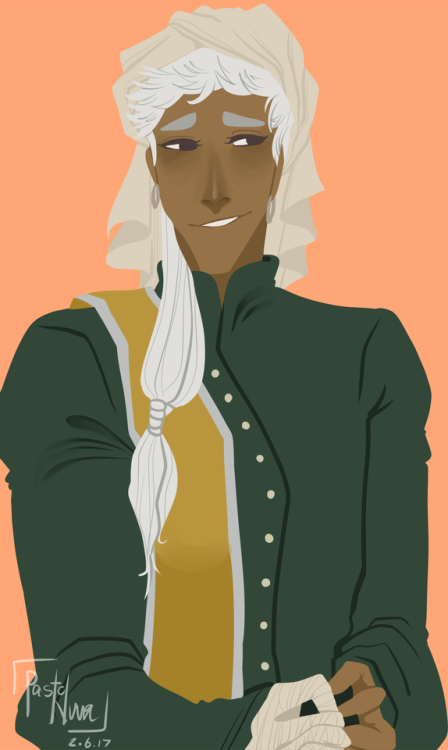 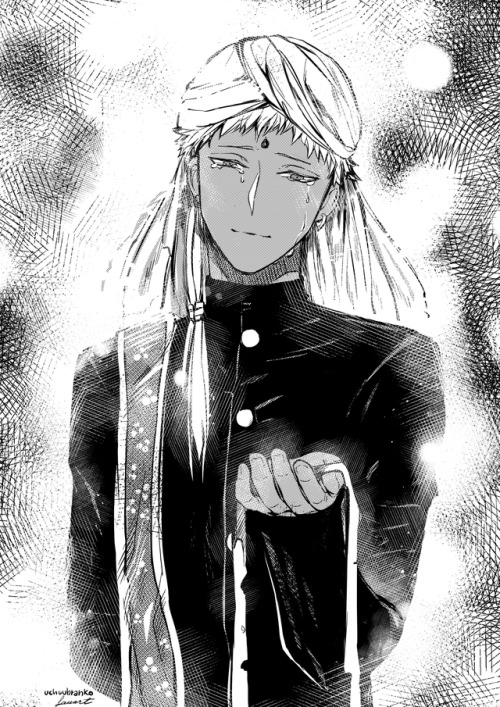 I actually can not believe that Agni is now dead.
Such a great character, yet Yana had to get rid of him. ;-;;