Dear kuroshitsuji fans in the US over 18: Vote.

I’m curious about this “master” that Polaris once worked for. When Polaris mentioned losing his master once before, Undertaker made an interesting facial expression.

What is that face? Sorrow? Regret? He looks mournful. Why would he be looking so solemn at the mention of Polaris’ previous master?

It is as if the mention of the demise of Polaris’ master brought back some type of painful memory for Undertaker and made him emotional.

Either way It’s clear that Undertaker was familiar with the person that Polaris used to work for, whomever that was.

As for Polaris’ real identity? Who knows. Polaris could be anybody, but IMO he’s definitely not someone we’ve seen already. He may have worked for Vincent or even Claudia - Hence Undertaker’s reaction at the mention of their death - Or maybe Polaris served under some other character who hasn’t been introduced yet.

Some people are speculating that Polaris is Joker. Sorry but I just can’t see it.

And Polaris as Agni? NO………just……no

The manga is far from over so Joker and the rest of the circus trope may very well return as bizarre dolls in future chapters - maybe even other characters like Madam Red or Agni - but I do not believe Polaris is Joker (or Agni *facepalm*) .

But yeah I’m curious to know who Polaris used to work for as I suspect that person was important to Undertaker. 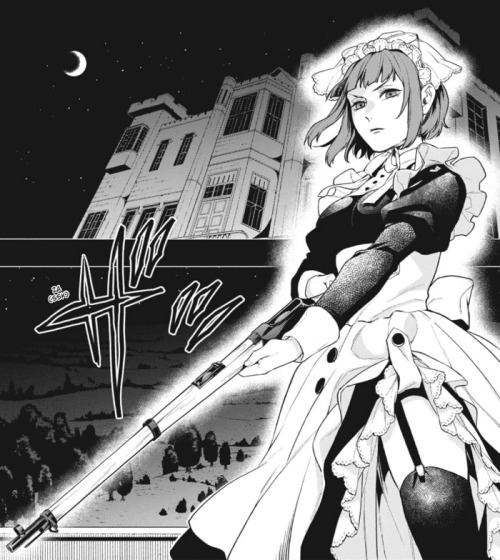 I think we have reason to be suspicious of Tanaka right now?

Chapter 133, Tanaka gets stabbed in the back when the mansion is attacked (Ciel’s flashback arc). We later see him alive and well, when he greets Ciel when he returns. At that point it’s just assumed he managed to survive somehow.

But in the most recent chapter (169), there is a mysterious man who is serving under Real Ciel and Undertaker. He is probably a bizarre doll (since he says he is already dead) and he claims to be their butler. I dont know if it is possible for a family to hire more than one butler, but assuming the Phantomhives only had one butler, his identity should be Tanaka. Who must have died when we saw him get stabbed.

That would mean Tanaka had been a bizarre doll all along, and possibly under Undertaker’s command. It would explain why he was so quick to switch sides once Real Ciel revealed himself. Could he have been reporting to Undertaker all this time as well?

The one thing that doesnt match up is that the man and Tanaka’s behaviour are so different. Tanaka is very calm while this man seems rather crazed.

no theory from me about who polaris is (besides it not being agni). shit is making me tired I have too much schoolwork and just wanna be surprised

Anyone else feel like Undertaker is either in love or obsessed with Vincent Phantomhive?

I mean- I see the appeal but even in death, this dude gets all the Punanny like- w u h

ok but if o!ciel’s name ISN’T sirius i’ll actually be disappointed because the amount of DISRESPECT r!ciel shows by forcibly labelling o!ciel as his actual name to the entire police force and also everyone else when he’s been parading around as his brother’s name for years is PHENOMENAL

There is no way that Agni is Polaris. If you need more convincing, send an anonymous ask and/or reread the manga where Polaris killed Agni. For those of you who see reason, thanks

Hi there! So for the title of this i know you must be really put off guard but trust me on this! Right, lets get into it.

So we know that Vincent died on that fateful day when the twins were ripped away from their family and we saw his body.

But also, how strange is it that the undertaker mentioned that there was nothing left of him, only ash. BUT WAS IT HIS?

DUN DUN DUUUUN Its so strange!
Lets think scientifically for a second,
A house burns up to 593 C (1100 F) and It takes about 760 to 1150 °C (1400 to 2100 °F) to cremate a body. Even then partial bones are left remained. But this is strange, extremely strange that only ASH and NO BONES were left. This gives the possibility that Vincent is ALIVE!

Why did sebastian pose as O!Ciels father when he ‘died’? Sebastian has never met the dad nor know thats the same position in which he was dead. SO HOW–

I can only conclude one thing and that is, IT WASNT SEBASTIAN! It was
V I N C EN T. AND THE REAL SEBASTIAN WAS IN THE GRAVE AND VINCENT SNUCK OUT.

But!
Lets talk about Blavat for a moment, Blavat has been acting very sus this whollle arc and clearly if he isnt a demon, HES VINCENT

Let me elaborate. All the cover art and art in general has STARS representing the twins and astrology aesthetics, who’s aesthetic is that? Blavats. Whos the twins father? Vincent. AND WHO is the father of all stars? BLAVAT.

AND SEBASTIAN LOOKS LIKE ADAM DRIVER, WHO LOOKS LIKE KEANU REEVES AND KEANU REEVES IS IMMORTAL WHICH MAKES HIM MAGICAL AND A SINGLE MOTHER SINCE RACHEL IS D E A D SO THERES ONLY ONE EXPLANATION!

It’s here come get it

Hi there! SO by the title you must be thinking, what on earth are you talking about well I’m gonna get into it. Sorry my introductions are rubbish

The line delivered from Ciel in the recent chapter (169) “i am no longer lord Sirius, that is my brother”

By that line, R!Ciel mentioned that he was no longer the Blue star, but his brother. And by that means, Blavats orders which are, Protect the blue star at all costs, are now projected onto O!Ciel. And thats evident by how in 142 when Blavat calls O!Ciel Lord sirius. And it had already been shown later on with the crash. He lied to Aabberline about O!Ciels whereabouts to protect him I can prove that–

(Hes speaking in sarcasm, otherwise, why would UNFORTUNATE ACCIDENT, be in bold?)

(Hes looking back after saying his line about court and that means something. He clearly knows where O!ciel and Sebastian are)

And now I think that because R!Ciel is going to have to be forced to go to the Hotel where his brother is working with Sebastian who are trying to get rid of the blood support. As it seems that they’re doing it one by one, the hotel arc will be the last and by then they will be forced to intervene personally by going to the hotel as they cannot afford to not be there. My claims are backed up by recent art and merch promotions :) Thanks Yana.

(And before anyone says this could just be merch, you’re possibly wrong. With all thats coming up for yana its not too far fetched to assume that these designs aren’t for the hotel. You can come back and prove me wrong later. But studios and so usually make merch early on from designs of media. so checkmate also its super sketchy to have the undertaker and Ciel there as well as the two main reapers in this arc.)

So thats going to put O!Ciel in danger considering now, that means the reapers are going to be there as well as the star lords to protect r!Ciel Does that mean blavat is going to have to betray r!Ciel to protect the blue star, his brother? There’s been many hints at Blavat being inhuman and possibly a demon so this is going to be extremely interesting

But also, lets pay attention to Jane in this recent chapter.

The line delivered by jane while also claiming to be Blavat’s lookalike is too.. Shady. I know yana is someone for foreshadowing and this could be definitely the case. I know we will be seeing her again and I’m still holding on that thin thread of jane possibly being Blavat. Is strange how she fled as soon as she could.

And with that line it all ties back to my theories on blavat. Maybe, If he was a demon, Betraying his contractor was not stated in the conditions? wink wink

But either way,
I think this is extremely interesting and i come to this conclusion,

OKAY guys who do you think that butler is…I‘m guessing sb that used to work in the Phantomhive manor or sb that has ties to Undertaker/The Phantomhives…But I haven’t had much time to think about this so please tell me!

My rational brain: Jane is trouble, and we probably haven’t seen the last of her.

Is Undertaker thinking about the limitations of his dolls here, I wonder…?

After all, oCiel talks so much about how you can’t bring back the dead, if you did it would just be a trick/reflection.

Undertaker seems content with that reflection, but his dolls, even the ones that run off of “future memories”, can’t really develop beyond that point. Polaris is proving this - he cannot imagine any existence except for the one he was set up for. No growth. No depth. No real autonomy. That’s not great for UT and his focus on individual freedom.

Or maybe his expression has more to do with the concept of work never ending after one’s death, all things about the reapers considered.

Or maybe it’s a combination, and this both reminds him of Dispatch and seeds doubts about the success of his new dolls.