“it must have been hard being alone for so long, right?” 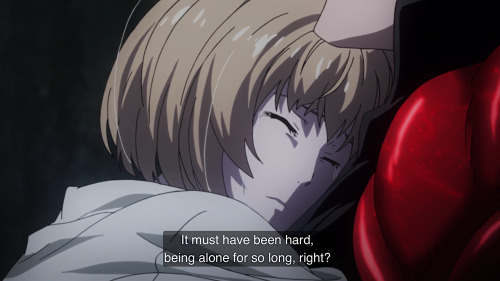 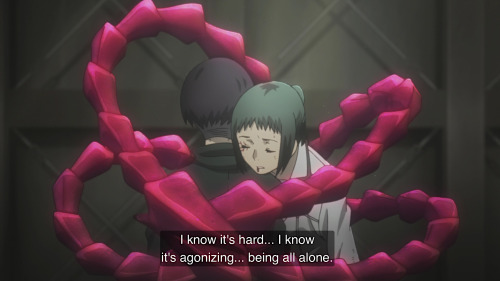 I wanted to take a look at Touka and Kuzen through the lens of how they handled situations differently, and how they handled their creations of cafes for their loved ones. It’s well known that Touka’s creation of ;re paralleled Kuzen’s creation of Anteiku. However, Ishida goes out of his way to show the immense differences between these two characters. This difference, and how it came to be, is portrayed in their backstories, and how  they carry themselves in the actual story. This post will cover things in both TG and TG;re.

Koma: Thanks, Irimi gave it to me

Irimi: I threw it at you

a long time ago, there was a ghoul called kuzen. he, like other ghouls, consumed humans, and killed and slaughtered his own kind to survive. though he cursed his fate, he remained strong… endured solitude…

I bring this up in quite a few Eto posts I made here, so I thought I’d explain briefly here. So, there seems to be this sorta omnipresent idea that when Kuzen took Eto’s place, this was a logical plan and worked, solely on the basis that Kuzen (Yomo’s story is a relay of Kuzen’s story) said it did. The problem is that Ishida makes it clear that this is factually not the case. Characters get things wrong all the time in Tokyo Ghoul (for example, “Kanou implanted a kidney in Kaneki”; “Rize’s steel beam incident was an accident”; “One Eyed Owl is the One Eyed King”, etc); this is one of them.

Tumblr’s refusing to put this into tags, for no discernible reason, and support is absolutely swamped right now with the new policy so this isn’t getting seen lol

I want to go through Kuzen and Eto’s relationship, because it’s one of those things that I feel most of the things are missed (like the fact that Kuzen is smiling in the last chapter of Tokyo Ghoul) and as such, it is severely misunderstood at every level. For example, what I want to start with, is that Ishida makes it clear that Kuzen never actually protected or helped Eto, and that Kuzen merely said he did, like how Kanou said he gave Kaneki a kidney. “Taking Eto’s place” doesn’t actually help or protect her.

Remember, this is a series where one of its central themes is failed parenting, not “failed children”.

One of the other ways Ishida shows Kuzen’s failures is actually through Touka. Touka kinda just… flat out rebukes Kuzen at every level through her actions, if not her words, and that’s why she succeeded with Kaneki.

I know Tokyo Ghoul is full of pain, loss, trauma, sorrow and tragedy, but for me, personally, as a mother myself, one of the saddest moments in the whole manga/anime is when Yoshimura loses Ukina and has to leave behind baby Eto, that part really had an impact on me because honestly I would’ve died in grief if I was him, also the fact that they never got to reunite and get to know each other breaks my heart.

Let me pretend that the cup from the last page of 179 chapter was meant for Eto.

Been wondering about Kaiko’s age and appearance. We know he trained Arima, so he’s probably older than him, and he was half-human. Arima was around age 33 at the time of his death, and likely to die very soon since half-humans don’t live much longer after 30. So Kaiko was likely just a bit older than Arima, which isn’t hard to believe since he doesn’t need to have been that much older to have trained him, especially since we don’t really know the extent or kind of training (may have just been basic combat guidance from a peer).

However, a few things seem to point towards Kaiko being a bit older than we’d expect from a half-human. The first is his appearance, he looks much older than Arima, and has a rather unnatural look.

The second is his apparent familiarity with Kuzen, Kaiko speaking to him like they were old friends. Kuzen could never fully cut ties with V, but the way Kaiko spoke to him gave the impression he knew him from when he was much more active in V. This either means Kuzen remained active in or in contact with V for a while after Ukina’s death, despite killing Ukina being his “last job as a cleaner”, or Kaiko knew him when he was a cleaner.

It’s entirely possible Kaiko was a child at the time, and became familiar with Kuzen at that time. Perhaps the reason he keeps talking about Kuzen was because he had some sort of personal connection to him when he was a child. Since Ukina was killed about 27 years ago it would mean he would have been around 6 or 7 years old (at a minimum, since Arima was 33) when he knew Kuzen in V if this is the case.

The anime however depicts him as the one who recruited Kuzen into V (the manga doesn’t show the face of the V member). This is either a pretty big mistake, a look-alike (some V members look a bit similar to Kaiko) or an indication that Kaiko (and presumably other V members) has been prolonging his lifespan somehow. One theory I had was that they were consuming the Sphinx RC solution that Eto mentioned to Amon back in the original manga, to extend their lifespan beyond the normal limits.

I expect we’ll find out the truth soon enough.

I really want Kaiko to have a Von Karma style meltdown when his obsequiously maintained tyranny is ruined for good.

I find it pretty awesome that Kuzen’s small act of defiance against V has sprouted into a full-fledged rebellion against them. By abandoning them and their values to try to create a small locus of peace in the world they corrupted, Kuzen proved another world was possible - the world that his friends and pupils are struggling to create now.

Kaiko realises the connection when Yomo mentions Anteiku, and much like Furuta’s criticism of Kaneki in the preceding chapter, Kaiko’s criticism reveals much more of his own flaws than those of his enemies. He can only see the world through a lens of manipulation and domination, and since his foes aren’t controlled by him, he assumes they must be controlled by Kuzen. He fails to understand their individuality and independence of thought and action, inspired by Kuzen rather than manipulated by him.

Kaiko’s obsession with the order of the herd is seen in his frequent use of the ‘we’ pronoun, referring to the collective interests of V. This is in stark contrast to the selfish Furuta, whom Kaiko naturally did not get along with - particularly in regards to his bad manners, which defy Kaiko’s orderliness and propriety.

The uniform faceless mass of black hats, coats and katanas that makes up V emphasises this collective, with Kaiko acting as the spokesman of the whole. He cannot stand rebels. Even now he resents Kuzen for breaking from the collective, disrupting its perfect unity, and still wishes to force him back into it. In fact, nearly every time we see Kaiko he’s mulling over Kuzen. That’s one hell of an axe to grind.

In the first, he joyously proclaims that Kuzen’s rebellion has come to nought, laying his anxieties at rest, while in the background Kaneki and Eto, the successors of Kuzen’s legacy, talk; thereby proving Kaiko wrong. In the second, his frustration is so great he breaks even his own rule of manners by swearing at the effect of Kuzen’s legacy in fermenting rebellion and disturbing his ‘peace’.

But his paranoia is justified - that single act of rebellion has caused his entire house of cards to come tumbling down. In the first series’ final arc, V’s control seems an unbreakable birdcage.

It’s implied in this scene that V orchestrated the Anteiku Raid to punish Kuzen’s insubordination, placing their well-polished heel firmly over Kuzen’s head. But in the final arc of :re, it’s Kuzen’s legacy that triumphs over V, and as for their birdcage…

Eto reveals the fragility of their seemingly solid control in the panels below. It rests precariously on a balance that is bound to eventually be overturned by the legions of oppressed beneath it, both the ghouls being slaughtered and the humans tricked into an endless war.

The return of Eto, as Kuzen’s child, is the most explicit symbol of the triumph of Kuzen’s legacy. Kaiko even refers to her as ‘Yoshimura’.

The importance both of Kuzen and Eto herself in this arc reflects their significance in the Anteiku Raid. Eto was the first major destabilising element created by Kuzen’s disloyalty, and Kaiko directly attributes Eto’s actions to Kuzen:

So Eto’s victory over V is Kuzen’s victory as well, and like him, this chapter she has finally broken free from their control.

The spectre of revolution has long been coming for V, and Kuzen’s small disruption of the system has led to its full-scale collapse.

He’s not dead!!! Last we heard he was alive but being farmed, just like Arata! Which kind of seems almost worse than death tbh. 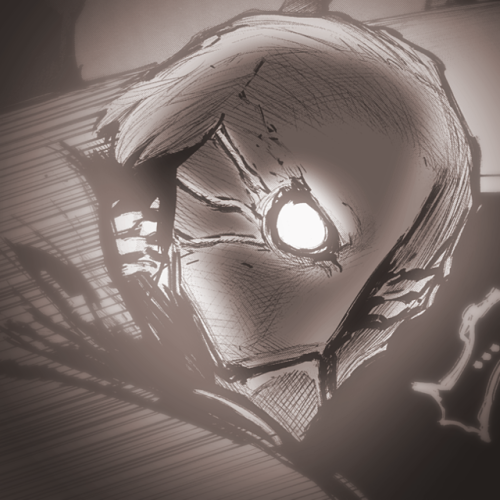 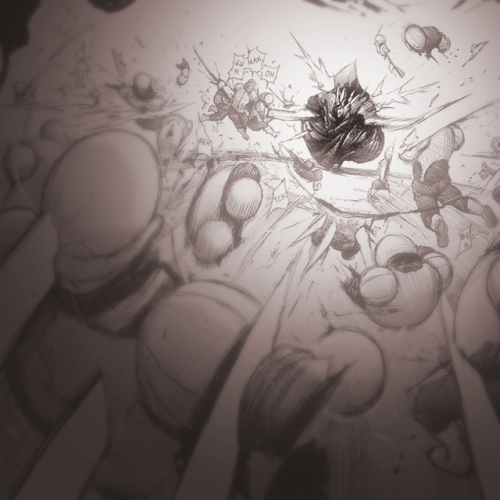 Ohh you're soo right ! That may also be why we saw Rize like that, it could have been a foreshadow to lead us to Arata. I wandered how we could see new Arata armors on Juuzo and Hanbei 😅 I wander though: do you think Yoshimura is still "alive" ? Last news he was used by Kano for the owls and we haven't heard of him since..

Yep. And Yoshimura… I presume he’s still alive and in the lab too. My guess is that if Eto is alive, that’s how her arc will end–with her coming to terms with her father. I don’t know whether I think Arata or Yoshimura are still able to be saved–it might be too late–but it might give their children peace to be able to say goodbye, at least.

Where is Eto :( I miss her. Narrative wise, what's left for her in the story? Did her character arc ever even complete? Her supposed "death" was so anticlimactic that she may as well have said "lmao lemme disappear for awhile, I'll be back fam". Also worth noting is the fact that Kanou is gone, meaning Yoshimura if he's still around doesn't have to be tanked anymore? It would be amazing if Furuta was storing Eto away somewhere all this time and she grabbed her father and fled the scene.

Maybe Furuta is letting everyone loose in the lab. It really wouldn’t shock me.

Narratively, I think Eto’s arc would involve closure with her father. That doesn’t mean necessarily reconciliation, because much like Touka and Ayato with their dad, I don’t know if Kuzen is conscious enough for that to happen. But should she be alive, that’s what I’d expect.