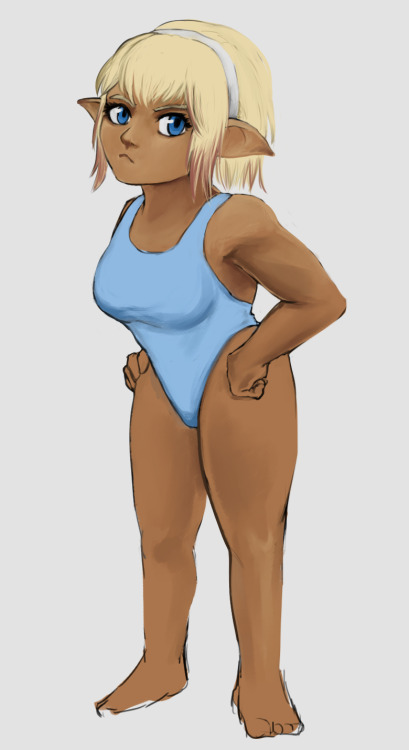 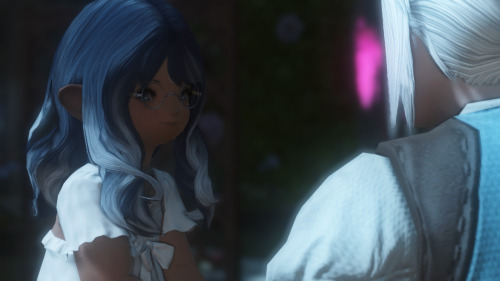 A little lady to cheer you on!

“Only their mother can tell them apart.” 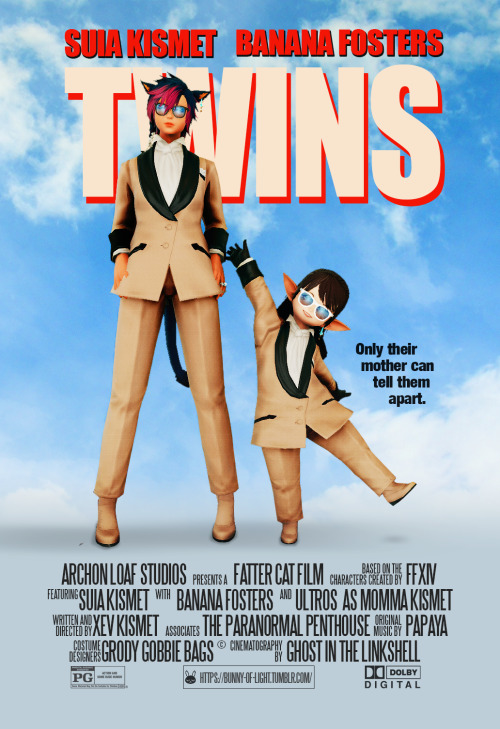 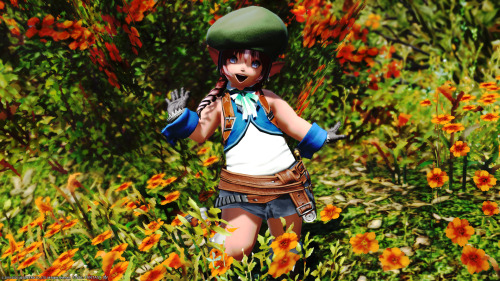 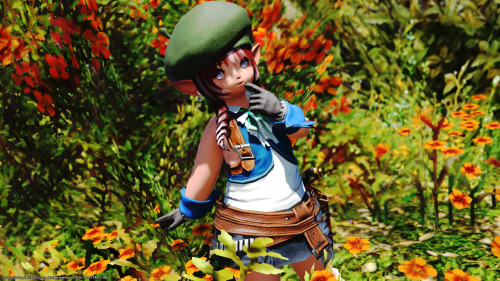 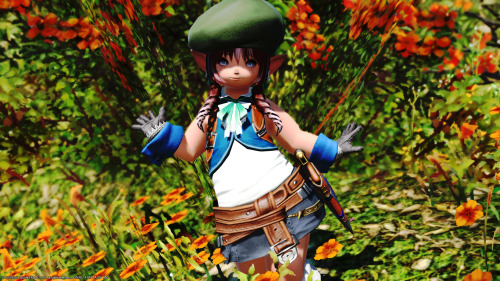 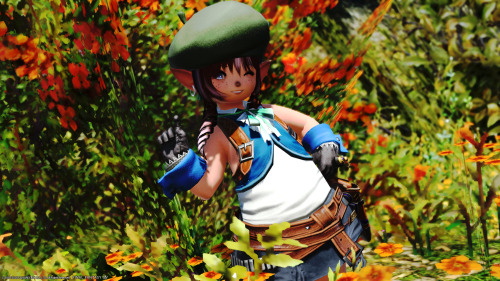 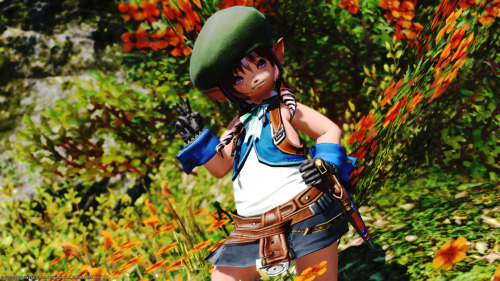 chibis of beau moss and nico! 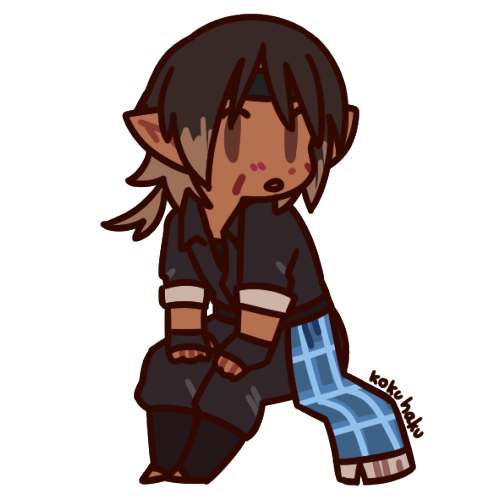 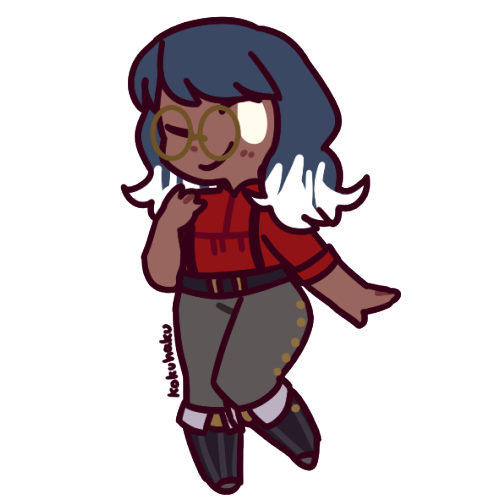 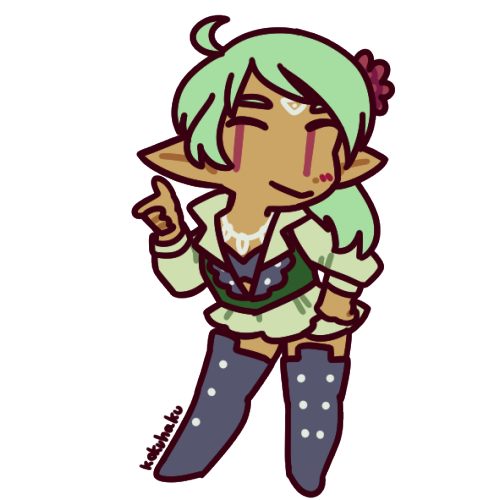 Sasala gritted her teeth as the battle was beginning to take its toll on her.  Her shield arm felt numb from the jarring blows of the Amal'ja and her sword arm fared little better.

She was fighting with everything she had but it seemed for every lizard man she and the Flames put down five more would replace him.

The Dunsefolk was aiming mostly for the archers so their arrows wouldnt drop anyone else like the first volley had done.  She felled yet another when suddenly they kind of backed away and began surrounding her.

The Lalafel stood readied hiding as best she could her fatigue.  Her eyes darted to each one of them waiting for the charge.

Then a voice rang out from behind her, “Throw down your weapon or your comrade dies.”

Whirling she saw the traitor of the Immortal Flames looming over one of the young Midlanders blade at his throat.  The Dunesfolk’s eyes narrowed and she began mentally guaging if she could charge him quick enough to knock the bade from the boy.

The young Midlander raised his head then his eyes widened and he called, “Behind you!”

Turning round she belatedly saw that the thaumaturge that the Flame Sergeant had been fighting was launching a spell in her direction.  She in vain tried to raise her shield hoping it would take the brunt of the effect to no avail.  The spell struck her in the face and she was horrified to realize it was one to incapacitate not harm.

As she stumbled struggling in vain to resist the spell she blurrily saw Ungust come up to her and sneer, “Bring her,”

The last thing she heard before the spell took full effect was the traitor snarling at the others to march and the sergeant cursing him.

(They are so adorable) 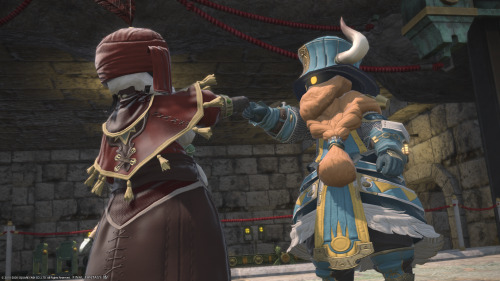 Learning how to paint sloooooowly.
My Lalafell from FF14. She’s a bean.
For anyone who plays, I’m Yonni Boi @ Cactaur!! 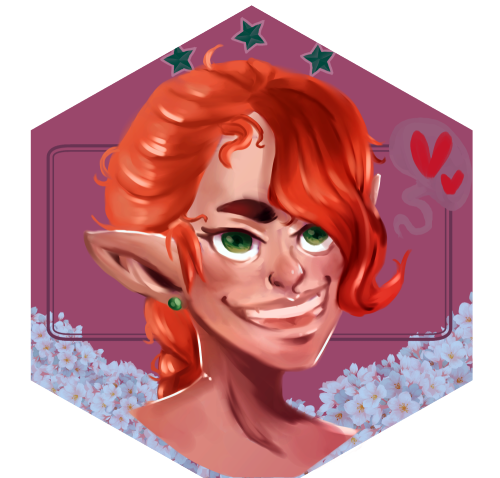 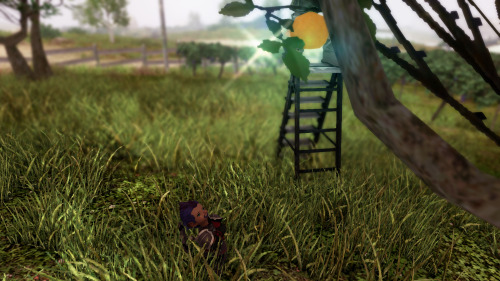 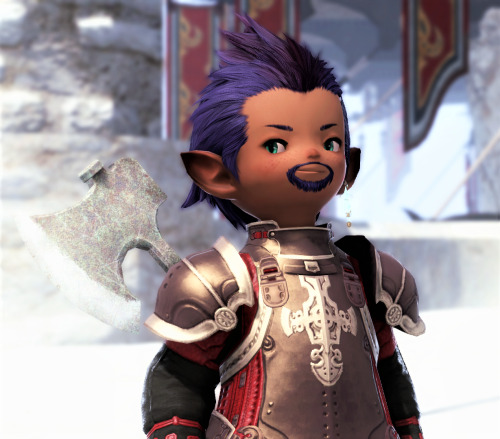 Someone in my FC said the /beesknees was a stripper dance so I can’t unsee it. And now neither can you.

My buddy Suia joined me and Ultros for a night of dancing and debauchery. 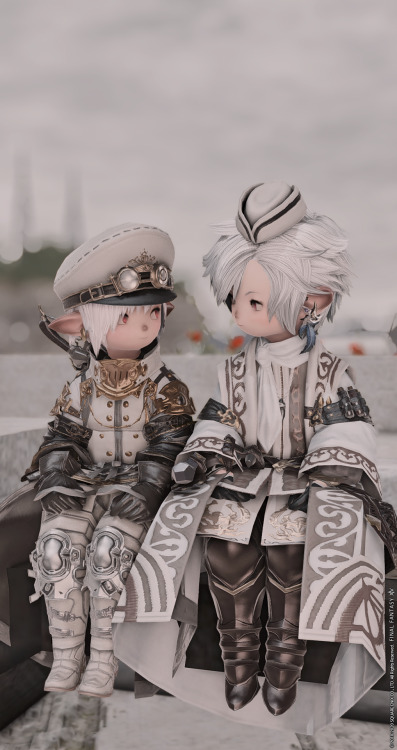 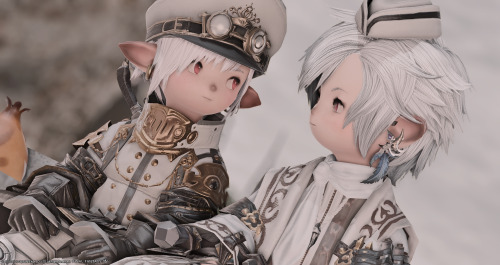 a set of ffxiv comms! 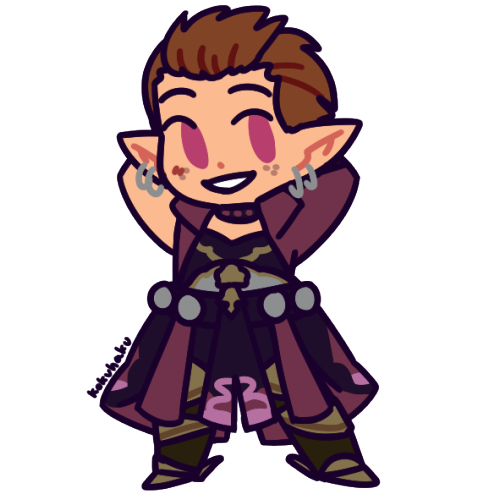 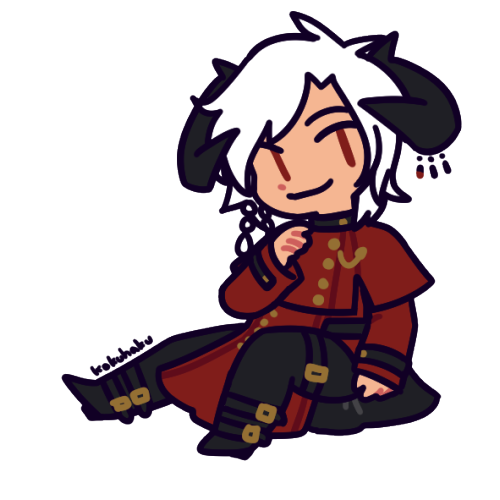 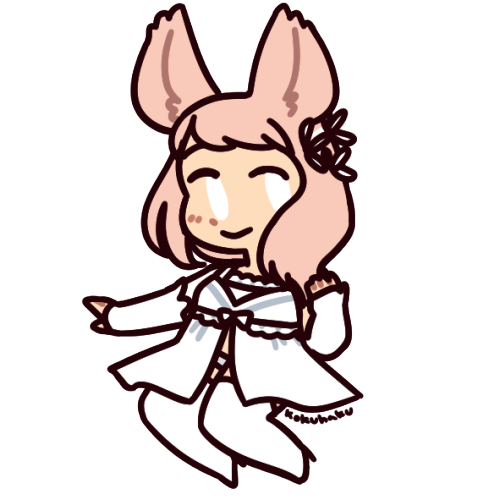 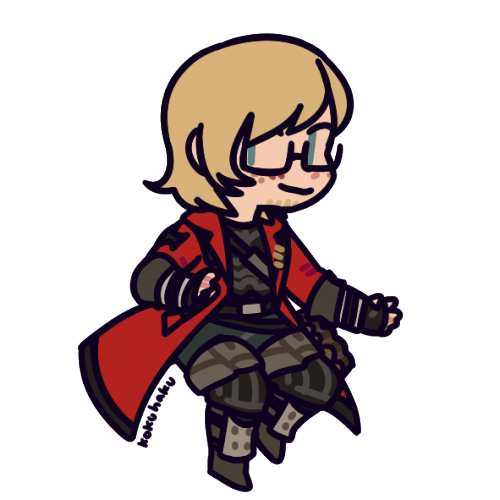 Lelulu walked back to her house the normally cheerful Lalafel furious.  How, how could they do this?  All she had done was try to have some of her fellows have a bit of fun.

Its not like anyone got hurt. They were illusions, she thought to herself tears of frustration threatening to fall.

Why was that woman so angry about it sister? Thyrus asked the little carbuncle bouncing beside her,  Wasn’t the point of the haunted house to be scared?

“It was, but apparently that stupid harpy from the Forum didn’t get that,” the Plainsfolk growled tear beginning to fall.

She stopped balling her fists and struggling to get control of herself.  Thyrus pressed close to her legs chiming soothingly.

Its not fair, Lulu told herself, I shouldn’t have been expelled because she got frightened.

It wouldn’t have been so bad if the illusions hadn’t been good.  However, even the Deans of the Studium  acknowledged the skill and realism that was used in them.  They told her as such before they then told her that they regrettably had to expel her due to pressures from the Forum.

Stupid bitch couldn’t handle the fact that she had been scared by an illusion of a Voidsent, Lulu thought angrily furiously wiping the tears from her eyes and continuing her trudge back to the house.

As she entered and removed her boots she saw her mother, Rululu standing in the living room and her heart filled with dread as she saw her face.

“What possessed you to do something so stupid!” the elder Lalafel shrilled.

Thyrus and her summoner both flinched at the tones as her mother continued, “First and foremost dismiss that construct since you don’t deserve to be calling it in the first place!”

Thyrus bristled but Lulu said quietly, “Just go for now Thyrus, its obvious mother needs to talk to me.”

The tones the Carbuncle let out as she obeyed her summoner could only be described as disgruntled.  In the next instant she vanished in a pop of aether.

For the next hour her mother yelled and screamed at her telling her how much of a disappointment she was.  Several times Lulu tried to explain but the elder Lalafel refused to let her.

“Do you know how hard your father worked to be permitted to consider sending you there and then you go and throw it away!” Rululu shouted for the eight time.

“That is enough Ru,” a soft male voice came from the front door.

Both of the Lalafel turned to see her father Lorider stride in looking his wife square in the eye.

“Your daughter…” the woman began

“I am aware, they sent a messenger to my office not long after,” he replied, “You haven’t let the girl speak for the past half hour.”

“Enough,” he said a bit more sternly then turning to Lelulu he said softly, “Now what led to them expelling you the messenger didn’t have the details.”

Lelulu was staring at her feet her two tone eyes brimming with unshed tears her entire body shaking with anger and she stated in a strained voice “I converted one of the halls into a Haunted House to share the idea of All Saints Wake with everyone.  There were glamour prisims that projected ghosts and Voidsent all looking quite real…..Then apparently one of the Forum came in and got scared.”

She then looked up at her father rage flashing in her eyes the tears falling, “And those cowardly Deans decided that her opinion mattered more than the skills of one of their students!”

“You will not speak of your betters in such a manner!  Remember it is by their grace that we have this house, your father his business….and if you refuse to remember that you have no place here.” her mother growled

Lulu whirled on her, “Maybe I don’t want to be beholden to my ‘betters’ especially when they are a bunch of cowardly idiots that care more about money than their people.  Same as you!”

The younger Lalafel then whirled and bolted to her room.  A burst of aether appearing behind her coalescing into Thyrus who glared at the older Lalafel before hopping after her summoner.

Moments later the door of her room slammed and Lorider looked at his wife his own mismatched eyes full of annoyance as he stated softly, “You know how badly she wanted to go to the Studium…”

“And she blew it by being so foolish,” Rululu snapped

She stepped into the kitchen intent on raiding the larder when she saw her father sitting there.

“Are leaving,” he responded simply, “I expected as much given how earlier went, here.”  he handed her a bundle full of dried food stuffs intended for travel and a bulging sack of Gil.

“Da….” she began then leapt forward hugging him, “Thank you,”

“Take the ferry to Limsa Lominsa,” he told her, “It has the Arcanists guild where you can further your studies in Arcanima,  Its also where my adventures began.”

The older Plainsfolk smiled at her stating, “Your more suited to Adventuring than the Studium anyway child,”

Lelulu stepped back smiling at her father again, “Just you wait, I’ll make both of you proud.”

“I already am,” he told her before shoving himself up, “Now I best get these old bones to bed, safe travels, little buncle”

“Rest well dad,” she stated then turned and headed out the door swiftly making her way to the dock and her new life Thyrus bouncing happily in her wake.

Levelled my Summoner to Lv70, got some sweet Summoner gear, and can summon Bahamut!

A couple expansions late but Chachanji has obtained the Omnibirb.

(The Omnihorse was also obtained off-camera.) 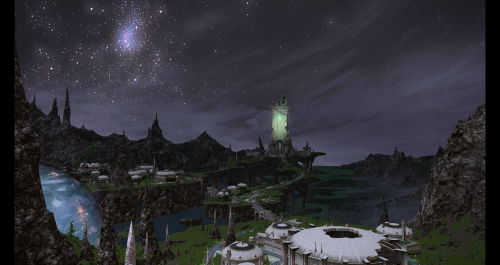 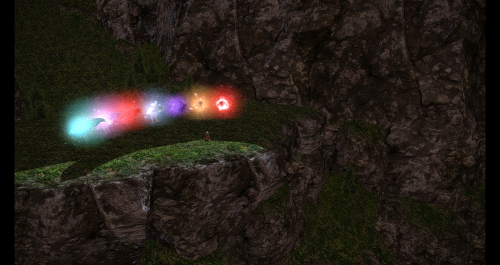 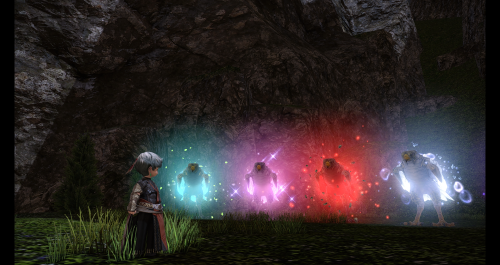 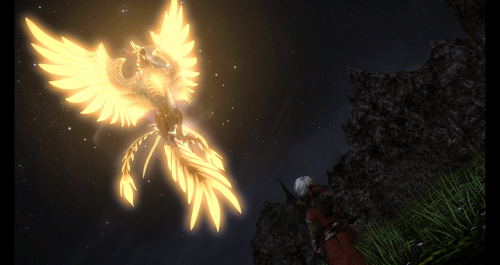 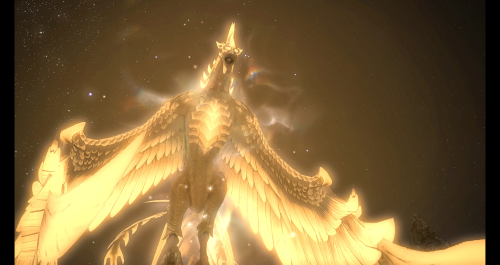 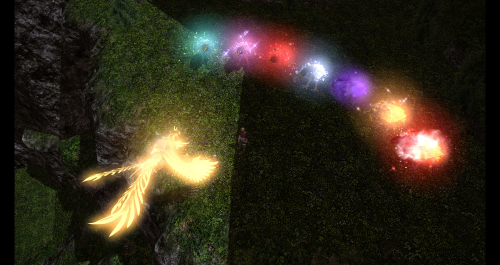 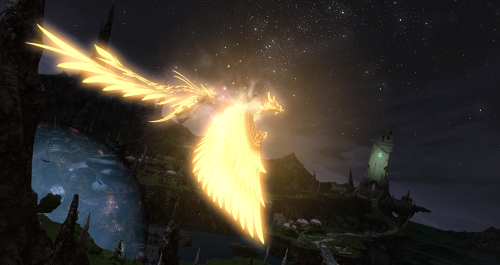 A friend who taught me how to read. I can’t really do her justice. Or her personality.  Fetrata. 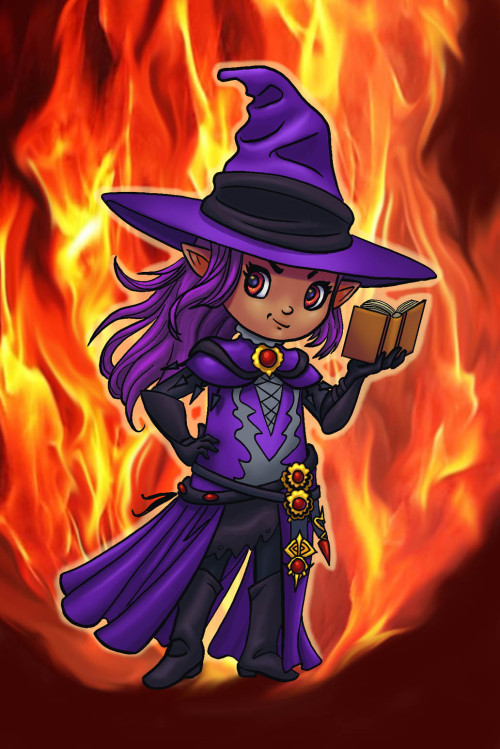 I know what I said! And I meant it!