Lan Xichen: Do you believe it’s possible, to love two men at the same time?

Wei Wuxian: Set the scene. Have we been drinking?

Xue Yang whisks a nihilistic Lan Xichen off on a murder roadtrip to raise Xiao Xingchen and Meng Yao from the grave. Because that will solve all of their problems, right? AU where Wei Wuxian never came to Yi City and Xue Yang is still running around post-canon disguised as Xiao Xingchen.

Chang Ping ducks his head slightly. “Of course, my good daozhang. Anything for you.”

“Anything other than putting that crazed monster in the ground, you mean.” Chang Ping blinks, his watery pink-rimmed eyes bulging even farther out of his head.

“I beg your pardon, daozhang?”

Ch. 6: meaner than my demons

“I need to make sure it’s truly him,” says Lan Xichen. He stares at the spirit-trapping pouch clutched in his hand. Everything is blurred but the small brown pouch, which stands out starkly in the flickering orange torchlight. “I need to—to—”

“If he’s not in there, he’ll never be, and we have to get out of here.” Xue Yang shoves the heavy stone lid back onto the sarcophagus and steers Lan Xichen out of the tomb. The rain has stopped, and the morning star twinkles brightly through a gap in the clouds. “Fun as this is, we can’t hang around here. Those guards—”

Lan Xichen doesn’t spare a glance at the Nie guards, still lying strewn around the tomb. He’s too absorbed by the spirit-trapping pouch in his hand.

The pouch is warm. Almost pulsing. The throbbing warmth seeps into his cold hands, into his veins, flooding his numbed body with pleasant heat—

here’s to your request

I was tagged by @leonzhng​ to insert bernie into CQL and i godda say, you really enabled my procrastination habit with this, thank you! XD

Bernie vibing with a centrist (this is a JOKE ^^)

YOU’RE NOT MY REAL MUM.jpg

These are all resicled screenshots from when I liveblogged the show, btw

Idk, are we supposed to tag more people? I honestly don’t know who was already tagged or who’d like to do this, but if you see yourself in that demographic, consider yourself tagged!! :)

Babies. That is all I am going to say. Lan Xichen with his baby? YEs- for the fic “(can anybody find me) somebody to love” On Ao3! 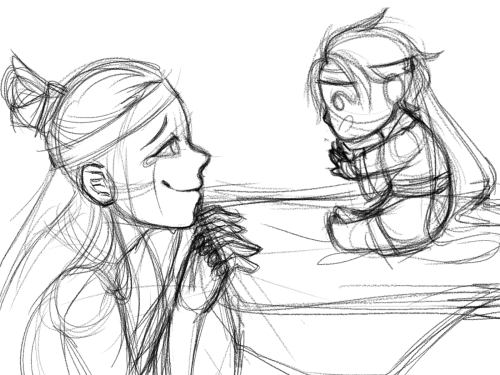 I…have no excuse for this. Legit none lmao

Zixuan wasn’t sure how he aquired two boyfriends, especially when they are Huaisang and Xichen. I mean, he did call them annoying(Huaisang) and boring(Xichen) at least once during high school, right?

What he also aquired was his boyfriends’ boyfriend. Jiang Cheng. Who can’t stand him. Not that Zixuan likes him any better

But as time goes by, and Zixuan starts getting tangled into his family’s secrets(he has how many siblings??), Jiang Cheng becomes someone who actually seems to understand? And starts asking what Zixuan wants, not anyone else

…Zixuan isn’t sure how to aquire another boyfriend. But he just might try this time

steal you away; 5k words

my belated bday gift for our lovely hgj

> fix it of sorts (everyone’s alive, it’s just not abt them not rlly)

> (strangers to friends to lovers)

link to fic: steal you away

if you want to retweet: retweetable link

The best part of these episodes is how we get to see the starting point of basically everyone in the entire show. Knowing more, you can pick apart places where it all could have gone a lot differently. Even right here in the beginning. Enough of my rambles, enjoy my other rambles.

• Ah the Cloud Recesses, such beauty, too bad my baby is late and can’t appreciate it

• Everyone is here! It’s before the everything that happens later. It’s cute, but I’m sad for them, you know?

• “And even though all of you are from different clans, we will recite 3500 of our rules to you”

• It is so funny to me how many people are paying much more attention to Nie Huaisang’s chittering bird.

• Lan Wangji literally stared at Wei Wuxian until he had his attention, THEN looked away “bored”

• Meng Yao, how do I even start? I knew later that he’d be what he became, but here when he’s so little and new and likes Lan Xichen so much. I just really wanted to root for him.

• Wen Qing is amazing and Wen Ning is so such a pure cinnamon roll (I know, I know, I’m dating myself horribly with that.) Their story is just so heartbreaking, how they become pawns, how they loose and keep losing, seeing the beginning here makes me think about what I’m in for

• We’re at a saluting ceremony, perfect place for a sword fight! Everyone reaches for swords to defend themselves, and Meng Yao steps in to protect Nie Huaisang!

• It basically ends in an example of the Lan musical cultivation since Lan Xichen plays, takes control of everyone’s sword, and ruins the floor

• Official sleep lecture time! Or we could pass notes, play pranks and doodle. What part of this is not causing trouble? Baby? I know that you’ve faced consequences in your life, but do you just forget?

• When Lan Qiren tests WWX here, it’s just smacks of pettiness. He wants to knock him down. Look, my baby came from behind to know all this stuff, and although he goes about it for the sake of arguing, Wei Wuxian isn’t really wrong here about the complexity of the actual answer. He’s already anticipating the shades of gray in life. But baby, did you have to mention digging up dead people?

• Wen Ning!! Sweetie you are really good at archery, go ahead and accept praise! The friendship between these two will always be one of my favorites. Wen Ning is loyal to the bone, and loyal very very fast. Before the Ghost General was born, he still risked his life for WWX

• Do you think that Lan Wangji actually went to the Library Pavillion first to look for Wei Wuxian, or did he already know better? I think either option is hilarious

lxc is just such a shippable character

i see one ship and think “oh yea thats a good one! theyd be very cute together” and 30 seconds later see him being shipped with someone else and think “ohhh yeaaa theyd be cute too”

After the jiang sect was extinguished, jc did everything to keep his sects traditions alive by showing and learning his new sect members about them.

One day, Lan Xichen, happened to come across one of jcs displays of a traditonal ymj dance…

I dont have a back story for this one, bust wanted to do some red string of fate nielan, a bit of ruojue and jgy as a bonus.

I do not ship 3zun nor lxc with jgy. At all. But sometimes wanting to read nielan involves having jgy there. Sigh.

I do love soulmate aus, sadly i dont much draw actual soulmate concept. I couldnt resist this one.

…I need to edit the heights if i do this digital… oops.

sketch dump! back at it again with some furry shenanigans :3c

what if… hear me out, what if sugar glider a-yao… Father Figures are OUT!!! FUCK FATHER FIGURES!! ELDER BROTHER FIGURES ARE IN!!!  I JUST WANT A BROTHER WHO WILL TEASE ME AND MAKE FUN OF ME BUT ALSO PROTECT ME AND PUT HIS ARMS AROUND AND BE LIKE IT’S OKAY YOU’RE SAFE NOW, YOU’VE GOT ME, US AGAINST THE WORLD, ALWAYS. YOU KNOW?!!?!!?! FATHER FIGURES CAN’T DO THAT, WE DON’T NEED THEM, THEY’RE DISAPPOINTMENTS!!

#and if youre like oh why not an elder sister#why do you not want an elder sister#bet its ur internalized misogyny#why do you need big strong man to take care of you huh#bet u secretly think men are stronger or whatever#then let me tell you#no#its because i am THE ELDEST SISTER!!!#AND IT SUCKS!!!#BEING THE ELDEST SISTER SUCKS SO MUCH PLEASE MY GOD#I WOULD NOT WISH THIS BURDEN ON MY WORST ENEMY#anyway elder brother figures include#nie mingjue#lan xichen#alec lightwood#i suddenly cant think of any but i know they are there
6 notes
bowen-jie
Text

Mdzs characters as photos i have of my cat [Pt.1]