‘cause anywhere with you feels right

In my head Jiang Cheng knew that Lan Shizui was Wen Yuan since the first time he saw the boy clinging to Lan Wangji’s leg on Jin Guangyao’s wedding. He never said anything but he knew, that’s why he always treated him a little differently than just random diaciples, there was a softness there that no one besides Jin Ling could see. Why didn’t Jiang Cheng try to get rid of him? What changed? Well first of all, he looked at the child and then at his own nephew and knew right away that he would not be able tu hurt the little Lan. He was just a child. He was also the only alive thing left, that reminded him of his brother. Because the boy may not have the Wei blood inside him, but he definitely was Wei Wuxian’s son.

The fact that they acknowledged the two dads. 😭😭😭

Is he not the cutest baby you’ve ever seen??? I cry.

MDZS Q is on the WeTV app and Youtube as Founder of Diabolism Q.

Jin Ling noticed that he was spending a lot of time with Ouyang Zizhen when he was walking his dog and a pretty boy whistled him loudly.

N/A: Idk what I’m doing, I just saw memes about Jin Ling x Lan Jingyi and I fell in love with the ship haha. A-Yuan is a Wen in this AU.

For the #CultivaTober2020, sorry if my English sucks.

Jin Ling noticed he was spending a lot of time with Ouyang Zizhen when he was walking the dog in the nearest park, his uncle Jiang Cheng was sick of viewing him all day in bed just because his only friend isn’t in the city for the weekend.

“Get out the house and do something!” he yelled at him after the lunch.

i need this to be canon

Lan Wangji is the best father, change my mind

In the early morning light

(Check the reblog to read it on AO3)

Lan Wangji was sitting alone in the main room of the jingshi, with a piece of paper placed in front of him and a flickering candle by his side, as he tried to put on paper all of the emotions that he was currently feeling.

It was still relatively early and snow was falling outside, making the Cloud Recesses eerily silent in the morning light.

This was soothing, since yesterday had been a long and very eventful day.

So eventful in fact, that Lan Wangji still hadn’t been able to process everything that has happened yet; because yesterday, Wei Ying gave him not one, but two precious gifts : their son, Yuan, and their daughter, Xiaolian.

Not that their son A-Yuan’s birth had been a surprise in itself, considering that Wen Qing had planned the surgery that would bring him to the world almost three months ago already and that Jiang Yanli had been present to comfort her little brother all through it…

Still, their little Lan Yuan was born as the sun had set, entering the world with a loud cry and a twin sister no one was expecting at all; not even Wen Qing, who had monitored Wei Wuxian’s pregnancy since it’s early days.

Hidden behind her twin brother, close to Wei Wuxian’s newly formed golden core, Xiaolian had spent a comfortable 40 weeks before she had followed Lan Yuan into the world.

After the twins’ birth, Jiang Yanli had helped Lan Wangji clean the jingshi and her brother, before she had left with her wife around the early hours of the morning, swearing that she would come back to help the new fathers later that day before Jiang Cheng’s visit to the newborns.

As soon as Wei Wuxian had been placed to rest in their bed, clean and with a healing salve applied on his fresh wound, he had fallen asleep, just like their precious little twins, who were sleeping by his side in a wooden crib Lan Wangji had commissioned from an artist in Caiyi Town months before their birth.

Overwhelmed by happiness and not wanting to disturb his family’s rest because he was not able to sleep himself, Lan Wangji had gone to the main room to think and work.

As he glanced outside, thick snowflakes still falling as they covered the grounds surrounding their home in a thick blanket of snow, he heard a tiny sound coming from his bedroom.

Thinking that the sound might come from his beloved husband and fearing that he might be in discomfort, Lan Wangji quickly got up and slowly walked toward their room.

As he glanced inside it, he saw that his husband was sleeping still, carefully wrapped in the silky blankets of their bed.

He did not seem in pain at all.

Lan Wangji was about to return to the main room, when he heard the low-pitch sound once more.

It was coming from one of the twins.

Curious, he padded slowly toward their bed.

The twins were both very small and bundled up together in one of Jiang Yanli’s handmade blankets, their little noses almost touching.

Lan Wangji’s heart swelled at their sight and when Xiaolian’s little nose scrunched up as she let out another tiny sound of discomfort, he felt worried at once for his daughter.

What could possibly bother her? After all, with Wei Ying, they had fed her and her brother barely two hours ago.

Yet, when Xiaolian complained once more, Lan Wangji bent forward and carefully grabbed her.

She was so small, and he was so inexperienced, he was worried that he could possibly hurt her; and yet, if she protested a bit at first, she calmed down as he pressed her against his chest, the beating of his heart soothing her at once.

She was warm and she smelled nice too. A mix of clean linen, milk and a bit like his husband too.

Her tiny lips were pursed.

They looked like Wei Ying’s and she had his nose.

She was a mix of them both and she looked absolutely perfect.

But, as she complained once more, her delicate features frowning slightly, Lan Wangji knew what he should do next.

He began to hum a song and she relaxed at once.

This was the sight Wei Wuxian woke up to a while later that morning : his husband, sitting in the corner of their room with their newborn daughter in the crook of his arm as he hummed her their love song, while their son was still asleep.

And outside, the snow was still falling.

The junior trio after Yi city

Sizhui: Do you ever want to talk about your emotions Jin Ling? 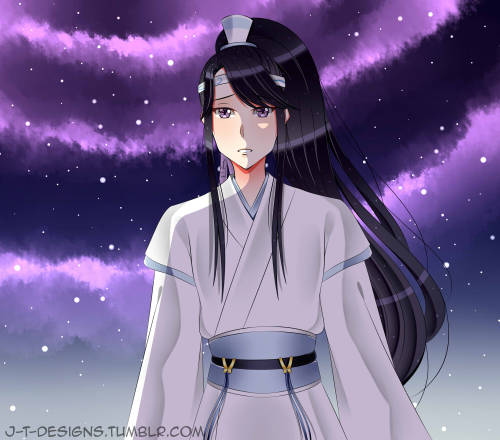 Looks like Lan Wangji’s in love again. What a softy. 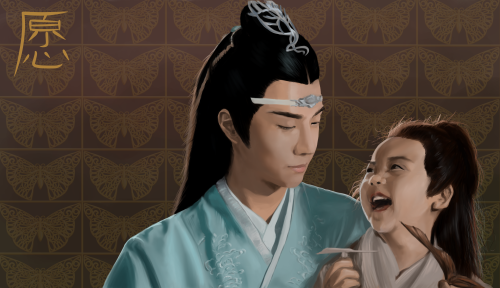 lwj : i mean, who in this room knows shit about relationships?

lwj pointing at lxc : this one? Is secretly in love with sandu shengshou

lwj referring to jgy : which is an improvement on his previous love interest, the serial killer.

lwj : meanwhile, i’m carrying a torch for a cultivator I pinied for more than 13 years and was technically dead

lwj may be referring to either ljy or jl : and a-yuan is in love with his cousin

lsz : okay, again, we are not biological

JingYi: Are we friends SiZhui?

JingYi: Dianxia, don’t pause like that. You scared me.