Ohhhh. My god. This is going to hurt so much.

(I am not triggered in any way, so don’t worry about that!)

I really, really hate putting Wei Wuxian through any form of torture. Which seems hypocritical of me because I’ve written many fics like that. I must warn you though, I’m not really good at torture scenes.

(Oh right, for those that don’t know, Wei Wuxian (in my Misunderstood fic) has two cores, one of resentful energy and one of spiritual energy. If one of his cores runs out of energy, his body starts to fade because those two energies are the only thing keeping him together (literally)!)

It happened about a week before the discussion conference.

Wei Wuxian had been having a nice drink by the inn near Lotus Pier when he suddenly felt very dizzy and collapsed into a dead faint.

When he woke up, it was to a room full of unfamiliar people staring down at him with sneers on their faces. And immortal deity binding rope was holding him down and his flute had been chucked off into a corner.

It would be difficult to get out of the rope binding him, but what many didn’t know was that he could still use resentful energy without any tools. It was harder to control them, sure, but he would still be able to escape. He didn’t know what these people were planning and he sure as hell did not want to find out.

Someone came up from behind and kicked him to his knees. His face burned in humiliation as they grasped a hand in his hair and forced him to look up.

“Do you know your crimes, Yiling Patriarch?”

At that, Wei Wuxian had blanked.

The men sneered and one brought out a discipline whip.

“Since you’ve forgotten, for every crime you’ve committed, for every life you’ve taken, you’ll take a lash from this. And don’t worry, we need you to be alive for this. We won’t be too rough.”

Ice flooded his veins as they named the people that had died during the Sunshot Campaign and Nightless City because of the Seal. His Seal.

So he didn’t move. Didn’t try to escape. Because it was true, wasn’t it? Those people died because of him. Even if he didn’t intend for it, he killed them.

If it was only that, it wouldn’t be that bad. He had been whipped before, he could handle the pain. His body was made of energy, so he didn’t bleed (though he could still feel pain) but that made the cultivators angry so they broke his fingers, sewed his lips shut when he got too loud, but he could endure it.

Wei Wuxian gradually grew numb to that. He had heard the same words from Madam Yu and from the cultivators at Nightless City all those years ago. It was no different then than it was now. But the pain he felt from those words was no less.

The resentful and spiritual energy in his body was scrambling to patch his wounds up in the lapse of their attention. However, because it was focused on healing him rather than helping him break out of the ropes, he wasn’t able to do anything when they fed him something. Wei Wuxian began to grow dizzy. His body felt hot and sweaty. This…..

Oh. They fed me an aphrodisiac.

Wei Wuxian didn’t know what they were planning to do and he sure as hell did not want to find out.

So he gathered all the resentful energy in his body - which, from experience was not a good thing to do -, absorbing as much as he could from the emotions of the men in the room before letting it burst out in an explosion. The rope disintegrated and he bolted for the door.

But not before a few sent their swords at his back. The remaining resentful energy removed them and the spiritual energy frantically tried to heal his wounds but he still lost a lot of energy. He could feel his body fading already.

He pulled himself together nevertheless and bolted out the door. Looking around, he was relieved to see he was near Yunmeng. However, despite that, he could trust no one. So he kept silent through all the pain until he made it back to Lotus Pier.

After all, wouldn’t his death make everything better?

When he woke up (on his stomach), it was to Shijie, Jiang Cheng and Lan Zhan all sleeping by his bedside in what looked like the infirmary room. He shifted and then groaned in pain. Using energy as recklessly as he did must have put a lot of strain on his cores.

“Are you alright?” They asked in unison.

Wei Wuxian would have laughed at how in sync they were. He didn’t. He only gave them a strained smile that he hoped they would not notice and told them he was fine. They didn’t believe him, of course, and kept fussing over him for the rest of the day.

As they did this, Wei Wuxian swallowed quietly, remembering the parting words that were shouted at him.

“As long as you’re alive and well, we’ll never forgive you! Next time, we’ll go after your family and friends. All those bastards who dared to support you!

Wei Wuxian quietly contemplated his next moves. He didn’t want to leave his family and Lan Zhan and everyone else behind, but……what else was he supposed to do? As long as he’s alive, they might forever be in danger!

He swallowed a qi replenishing pill and forced his tears down.

I never wanted to come back in the first place. What was ghost!me thinking when he decided to come back? I……I don’t know anymore……..

The discussion conference was held at Lotus Pier and Jiang Cheng and the rest had tried to convince him to go. After all, they believed that the cultivation world wished to apologize to him (and simultaneously ask for his help against the new evil).

That’s what they were hoping.

That’s not what happened.

Instead of an apology, they started blaming Wei Wuxian for their current predicament. They hurled abuse after abuse at him and Wei Wuxian just stood there with a blank face and took it silently.

That was, until, someone yelled, “Wei Wuxian, it’s all your fault for creating the Seal!!! If you hadn’t, we wouldn’t be in this situation! We’ve all suffered because of it. The Jiang sect is one of the only sects who hasn’t suffered. Shall we make them feel our pain? After all, your sect should pay for your crimes, should they not?”

Wei Wuxian let out the most heartbroken sob and stood in front of the cultivation world.

“If it’s life you want, then I will offer you mine.”

Jiang Cheng, Jiang Yanli, Lan Wangji and a few others cried out his name and reached for him, but Wei Wuxian simply reached deep into his cores and turned the energies against each other.

His cores cracked and shattered and Wei Wuxian began to fade right in front of everyone.

“NO!” Lan Wangji yelled out in an uncharacteristic display of emotion. He rushed forward and recklessly poured spiritual energy into Wei Wuxian. “No, Wei Ying, no. Don’t leave me! You can’t! No, no, no.”

The rest of his family and friends gathered around, trying to see what they could do to keep him alive, but…..his cores were gone, it was useless.

And then he was gone.

Hmmm, I still feel a liiiiiiiiittle iffy on how this turned out (so I might edit it later) but I hope you enjoy, anon!

Illustration for Chapter 5 of Cantatio!

Lan Wangji stumbled over as fast as he could. His legs were not working reliably after having so much of his energy drained. What kind of state would Wei Wuxian be in?

He squatted in front of Wei Wuxian, grasped his shoulders, and lifted his hunched torso. His eyes were shut tight, and his mouth hung open, threads of saliva beaded on his tongue.

Starting to panic, Lan Wangji pressed three fingers into a groove on Wei Wuxian’s neck. He was warm. His pulse was surprisingly fast.

Read on AO3 now or on Tumblr tomorrow! Updates every Monday on AO3 and Tuesday on Tumblr :) 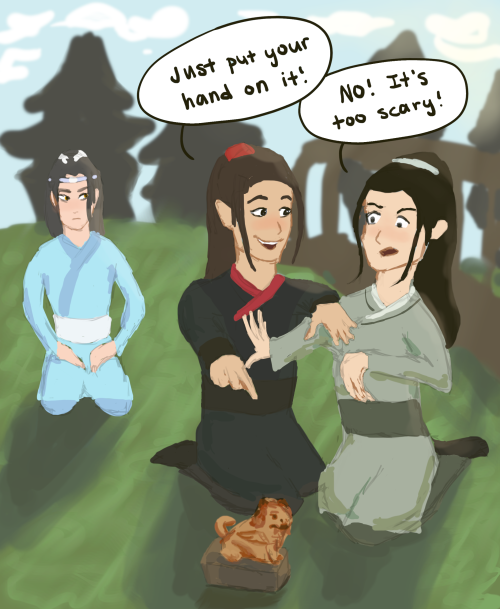 Hey what’s up, I decided upon the absolutely ridiculous task of drawing every single outfit Lan Zhan and Wei Ying wear in my fic For A Good Time Call, 21 chapters worth of clothes, and naturally I started by making the world’s most overcomplicated croquis. 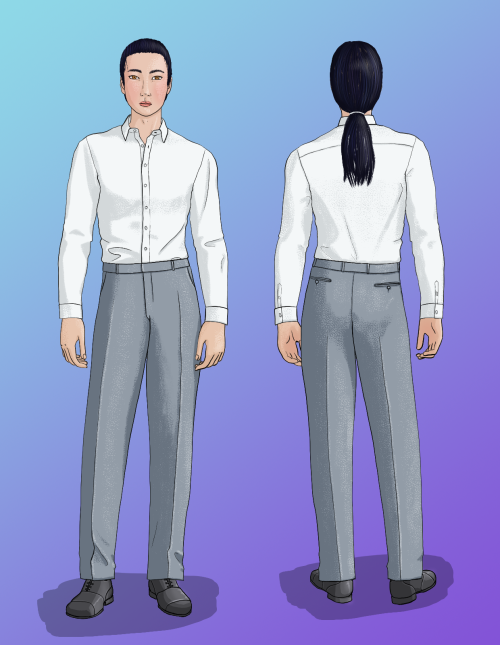 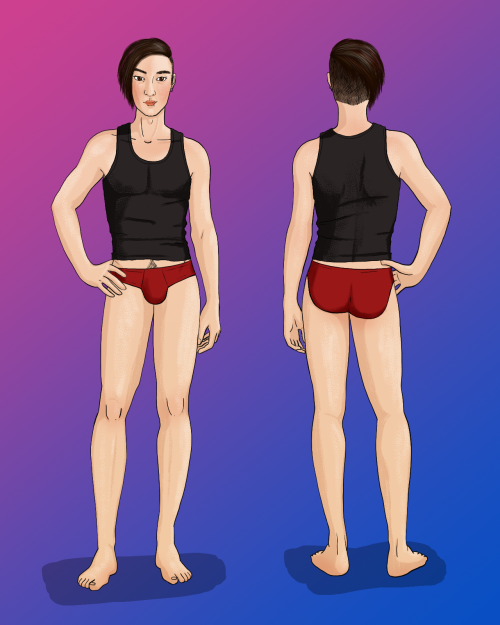 I made this free phone wallpaper

First chapter is up! Check it out :)

a/n #1: written for the MDZS Big Bang 2020! the title is taken from steven universe’s “that distant shore” bc i feel it bodies lwj’s thoughts about wwx perfectly. thinking of the dragon dynamics similar to how abo works will help you with understanding them, but to be clear: there is nothing sexual going on in this fic. madam lan’s story has so many gaps that bother me a lot bc when i look at the gaps i see a backstory like the one i gave her here since it’s just what makes sense when you really think about it. the non-con is only talked about somewhat in-depth in one scene and mentioned briefly across other scenes afterward. if you want to skip the heavier bit of it, stop reading at “Then why, Lan Zhan asks with his eyes.” and pick back up after the art that minzi made to accompany this <3 hope you enjoy!

summary: Lan Zhan’s memories begin from the moment he hatches out of his shell and meets his mother’s golden gaze.

part one of gentleness of light, escaping 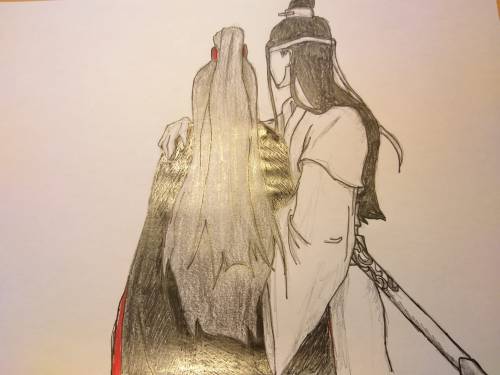 WWX: Lan Zhan,it says our compatibility is low but make up sex is great

LWJ: Wei Ying what are you doing?!

WWX: Getting you angry to prove if the second item is true

Like all recognized cultivists, Lan Zhan agrees that vigilantes should not join their fight against ghosts, ghouls and other evil. Their unregulated fighting methods pose a danger, both to them and the people they are trying to protect. It’s unfortunate, really, that the Yiling Patriarch has never cared about rules at all. 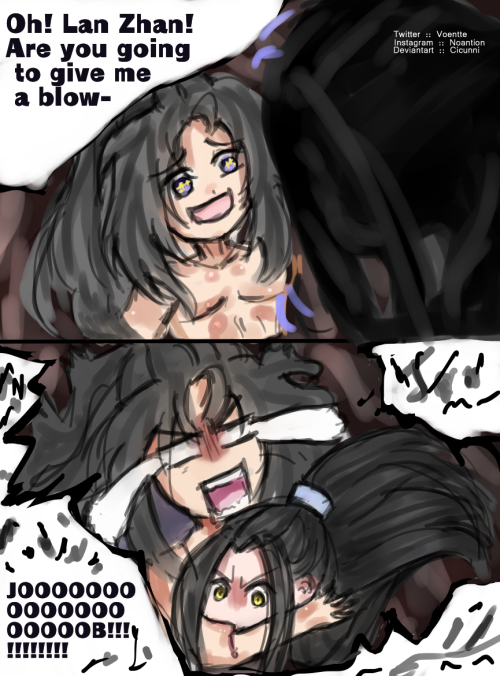 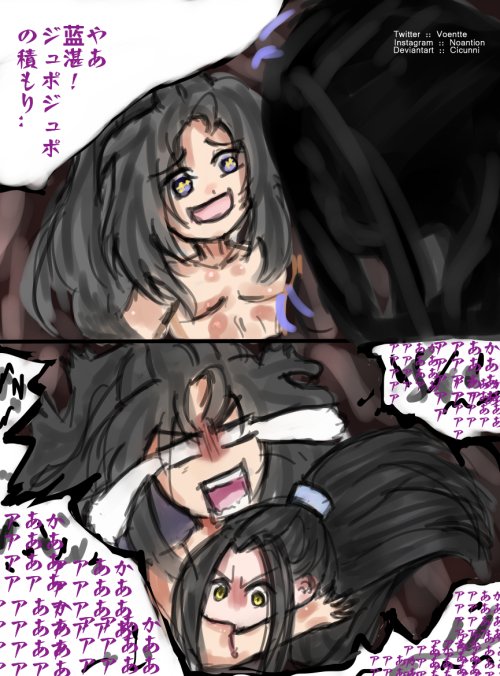 Messages from Wen Ning to Mo Xuanyu and Nie Huaisang

| feel free to use these gifs as reaction gifs | 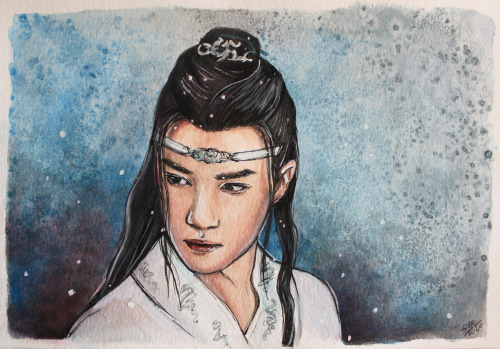 I AM SO HYPED FOR MDZS SEASON 3 PLS

Just, imagine if JC had just a little less patience. Imagine when they went looking for the cave after the Wens burned down the Cloud Recesses.

WWX: Lan Zhan is walking strange. What’s wrong with him?

JC: other than being in love with you? He got hurt trying to protect the library.

JC: Don’t even try to pretend that you’re not gay for him too.