I am still here, hi hello! I hope everyone is doing okay, that all of you are safe and well and that you are all staying inside and following the regulations put up by your national government ☀️🌿

For my English individual oral activity for IB, I received an extract from Macbeth, where Lady Macbeth receives the letter of Macbeth telling her that he has become thane of Cawdor. I absolutely loved talking about it! My teacher gave me a near to perfect mark for it as well! ☀️

And quarantine has been enforced since Monday, meaning no more preliminary exams for now and a doubtful final exam in May.

Try to stay positive. Go out as far as possible, even if it is just down the road and back. Read the books you have been meaning to read or catch up on school work you have missed. And most importantly, be safe and take care of yourself and your loved ones.

We live in crazy times at the moment, almost apocalyptic if you were to believe the media completely. It is scary and uncertain. Please be safe everyone, take care, wash your hands often and keep your distance from people outside of your home.

Feel free to add to the list of tips that will be following up this line by reblogging, let’s help each other out.

Current read: If we were villains by M. L. Rio

Five preliminary exams down, three to go. Art history, English IB and Latin. I have had history and my oral examination of French today, both went quite well. Some questions of the history exam were actually extremely interesting.

Tomorrow’s exam is art history with a focus on postmodernism and institutional art theory. I am currently revising for said exam whilst drinking tea, I cannot wait to get back to reading again.

Translated and studied Seneca the Younger’s Epistula 47 from te Epistulae Morales ad Lucilium and some selected passages from his De Brevitate Vitae for an oral test. I thankfully find Seneca quite easy to translate, so it’s been a long but enjoyable study session.

Today wasn’t all too productive, I am exhausted to such a point that I can no longer function. I managed to translate a Latin text and read two acts of Macbeth. I hope to get an early night today.

Because of the recent teacher demonstrations, I did not have any classes besides English language and literature today, thus I spent most of my day at home. I managed to finish up both some Latin and some history work, and I decided which preliminaries I will be retaking as well: Mathematics from Preliminary week 2, Latin from week 1 and most likely, still a little dubious on this one, geography from week 1 as well.

I began reading Oliver Twist today as well, I am really looking forward to the story!

My art teacher has displayed my work, as visible on the second picture, I couldn’t be More proud and grateful!

a group of latin students:

#mine, #latin student, #virgil gang, #the ancient poet not the sanders side
4 notes · See All
cofedatesText

“weekend reads. two cups of tea down, waiting on a grocery run for more oat milk and maybe a salad. today’s to-do list consisted of translating capitulum IX for latin, read experprts from an ancient philosophers notes to discuss on tuesday. it’s cold outside, but the sun is trying to shine.”

“Sweet” and “cute” are the same word in German.

In a german translation Kriton says on the first page to Socrates that he sleeps “sweetly”. The translator probably meant “without any worry”, even added an annotation to explain it, but half of my latin group was shipping it already… ;)

looking at my mom shrugging and she says “It sounds nice, but I have no idea, so…”

Aren’t they the earliest rival slash ever?

#latin, #latin student, #declensions, #is declining the right word to use?, #oh well, #Micheal put this on the instagram
1 notes · See All
matt-studiesText

Learning all the verbs for murder in Ancient Greek and Latin instead of things like “May I use the bathroom?” (My fave is interfecere btw)

Reading about petty™️ gods and how fabulously extra they are.

Attempting to identify ancient objects, giving up, and just calling it “religious”

Latin teachers saying things like “The Romans do a great job of taking ideas and making them better!” while we all know y’all mean stole

Going back and forth between Greek and Roman names of gods

Last two brain cells™️ upon seeing a future passive participle and a form of sum, esse together 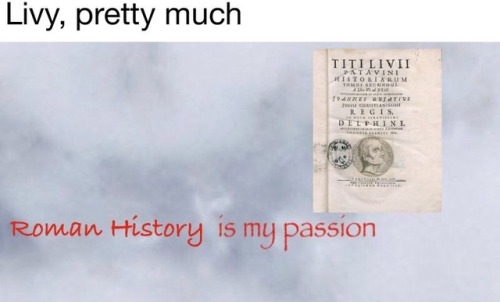 My Latin class has a group chat for when we need translation help and it was goin wild last night. Not with translations but with Roman memes.

#classical humor, #latin student, #latin, #I SAW SOME OF THE BEST CICERO ONES LAST NIGHT, #lmao, #latin class
1 notes · See All
Next Page