Barba: I’m not saying anything without my lawyer present

IAB: Sir you are the lawyer …

Barba: then where’s my present?

What svu writers decided to bring back Brian Cassidy when Dave Duethorn was Right There?…

#svu, #law and order: special victims unit, #this is a detective dave duethorn appreciation post, #the real crime is that he was only in two episodes
0 notes · See All
incorrectcabensonquotesText

Olivia: Gonna go pick up some Thai food. Text me what you want?

Olivia: Yeah but I said just text it to me.

Olivia: Yeah but I’m not gonna remember it. And then you won’t like what I get you and then you are gonna want some of mine.

Elliot and Olivia || Only

What does is say about me that I watch “Law & Order: SVU” to feel better?

My mum and I were watching the first episode that Eames turns up in SVU and when her and Benson were interviewing the suspect, we both screamed, “SHE’S GONNA LEAN” and my dad had no clue what was going on.

Some of the reasons I love Fin

A/N: English is not my first language, so, sorry if there are grammar mistakes or if the redaction is poor. *Gif is not mine*

|| Read since the beginning ||

When detective Amaro was ready to go home, he felt that the moment was never going to come. That day had been long, maybe the longest workday he has ever had in a very long time. He was ready to get home, grab a beer and watch t.v for half an hour and then, go to sleep.

The Captain was saying something about how they all deserve to go home after that day, but Nick didn’t hear him too well ‘cause his phone started to ring, so he walked a few steps away from the squad to answer.

“Nick?” Your broken voice made all his fatigue vanish away and suddenly, his blood ran cold.

“What happened? Are you okay?” He asked, his voice sounded as he was in an urge of knowing whatever happened to you. “Is Sean there?” He walked to his desk, grabbed his keys and coat.

“Can you come?” You cried, not answering his question “Please?”

“Everything’s okay?” Olivia asked him, she was the only one left in the office ‘cause everyone ran out as fast as they could from there “Want me to go with you?”

“No, I’ll tell you everything later,” he said before running out to the elevator.

Nick didn’t remember the last time he drove that fast, he even regretted not taking a car from the department, he could get the sirens on and his way to your house would be easier and faster.

He jumped out of his car and went into your building, he didn’t want to wait for the elevator so he just took the stairs to the third floor where your apartment was. He was nervous about what he could find. It didn’t matter if you had killed Sean, he would help you to hide the body, he was just praying you were fine.

But you opened your door and he saw exactly what he didn’t want to.

Your arms were covered in red marks that soon will be bruises, one of your cheeks was red, your bottom lip was broken, you had a wound in your cheekbone and he didn’t want to imagine the rest of your body.

“He knew our baby it’s a girl,” you said, your eyes were holding tears.

“Where is he?” Nick asked, looking inside the apartment and turning to the hall. “I’m gonna arrest him right now”

“No, please… I don’t know where he went” you shook your head and seeing the look Nick had in his face, you knew Sean was lucky to not be there “Nick… I want to leave”

Nick looked at you and focused on what was important: you.

He nodded “I help you to pack”.

You grabbed two suitcases, in the smaller one, Nick started to pack all the baby clothes and toys you had as you were packing most of your clothes in the bigger one. Nick told you to not to worry, that he would come back for the rest of your belongings.

You were calmer than Nick, you even were trying to talk about anything it occurred to you, as Nick asked you every two seconds if you were okay.

“We’re going to the hospital, just to be sure you both are okay,” he told you.

You didn’t want to go to the hospital, you knew the nurses and doctors would do a lot of questions and you didn’t want to press charges against Sean. The only thing you wanted was to get out of his life.

But you also wanted to know if the baby was fine. While Sean was beating and kicking you, you tried to protect your belly with your arms. Now, your baby was moving but she wasn’t doing it like when Sean leaves the house and that worried you a bit.

You and Nick walked out of your bedroom with the suitcases and when you’re about to step into the living room, you heard someone opening the door. Immediately, Nick grabbed your hand and pulled you behind him so he would be the first one Sean could see.

“What the hell are you doing here?” Sean asked at the moment he saw Nick. You grabbed his arm trying to calm him and Sean got furious when he saw you doing that “Get away from my wife!”

“The only one getting away from (Y/n) is you, mister,” Nick said. All his muscles tensing up while saying those words. If you weren’t there…

“You’re leaving with him?” Sean asked you, trying to get closer but Nick didn’t let him “After all these years?”

“Years of what?” You said, not knowing where your voice came from or how you dared to say that “Years of me having to walk in my tiptoes? Years of screams and abuse? Well, yes, I’m leaving after all these years…”

“That’s all nonsense, you know that I love you…”

“You killed my first baby!” You cried and Nick looked at you for a second. He didn’t know that and now that he did, he was more than furious “You don’t love me, you just love having someone who makes your meals, you just love having a sex toy so you can brag about it with your friends… that’s not love”

“You’re not thinking clear, you wouldn’t be saying all that stuff if it wasn’t for him!” he said, pointing at Nick.

“No, the only one who opened my eyes were you”

You looked at Nick and nodded in a way of telling him you were ready to leave. Not knowing if he could hurt you, he delicately placed his hand on your back and grabbed the biggest suitcase as Sean watched all your movements.

“The only one cheating in this relationship was you…”

“—That means that baby is not mine? Of course, it’s not! I have no female in me!“ He shouted, "You’re a fucking slut!”

And that’s when Nick lost control. He released from your grip and pushed Sean against the wall before punching him in the face. You screamed for the surprise and tried to get close, but Nick got away to not hurt you, his arm pressing against Sean’s neck as he said:

“I don’t arrest you ‘cause she asked me not to, but you better back off now if you know what’s better for you. You heard me?” Nick let him go, Sean coughed a few times and Nick grabbed your arm to put you behind him again.

“Those are my suitcases!” Sean shouted from the floor once you were about to walk out.

You got into the elevator and once the doors closed, your tears rolled down your cheeks and your hands started to shake. You never thought you could leave. When Nick said you were just like your mother, that was the first thing you thought: that the only way you could leave him, would be if he was dead.

Nick’s eyes got cloudy as he pulled you closer to him to hug you. Your forehead ended in his chest as your arms surrounded his torso. “I got you” he whispered, before kissing your head “I got you”

That’s when you knew Sean was half right. Maybe you decided to leave him. You didn’t want that life for your daughter, no kid should live in a house like that. But also, you had more courage this time ‘cause you knew Nick would be there for you.

|| Read since the beginning ||

Request : “Are we on a date right now?” With Nick!! Subtly taking the reader out for dinner after a case or idk. Something with flustered Nick!

“Hungry?” Amaro asked, leaning up against your desk, you smiled tiredly at your partner and dropped your pen onto the document you were filling out

“Starving,” You admitted, Nick returned your tired smile and nodded towards the elevator.

“Let’s go,” You glanced down momentarily at your paperwork but Amaro just reached a hand out to you, “Come on, Y/N, it’s late. Paperwork will still be here in the morning, I promise.” You mumbled something along the lines of ‘that’s what I’m worried about’ but he was right. Any work you did now would probably require more effort to correct tomorrow. So you accepted the hand and allowed yourself to be pulled into a standing position with a groan. Your partner immediately dropped your hand and ushered you towards the exit.

Casey Novak with a photographer girlfriend

Request : head canon for Casey with a photographer girlfriend?

nick amaro balanced being a cop and raising his daughter as a single parent whilst his wife was stationed away from them for months at a time and maria REALLY HAD THE ABSOLUTE NERVE to come back and announce shes taking his daughter away from him without even giving him a say.

Everyone in the show falls in love with Olivia benson at some point. 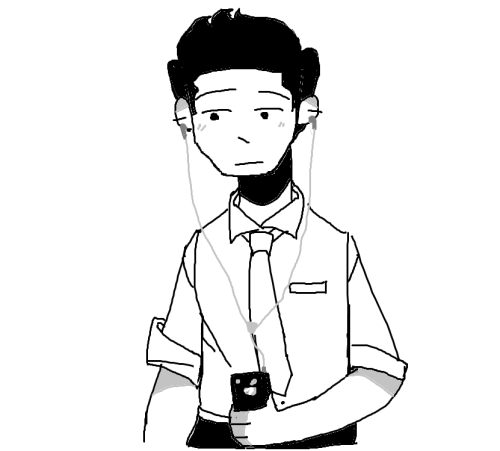 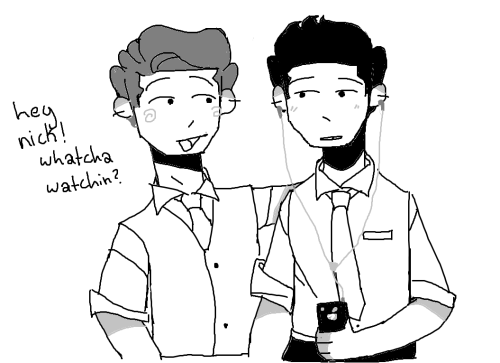 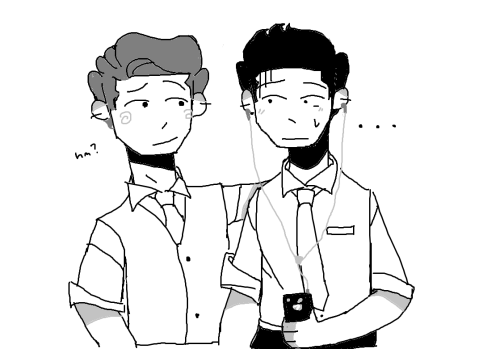 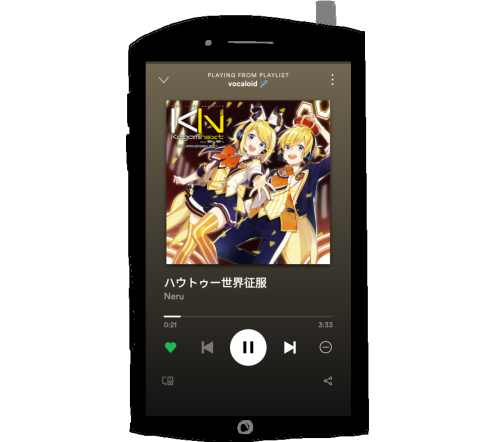 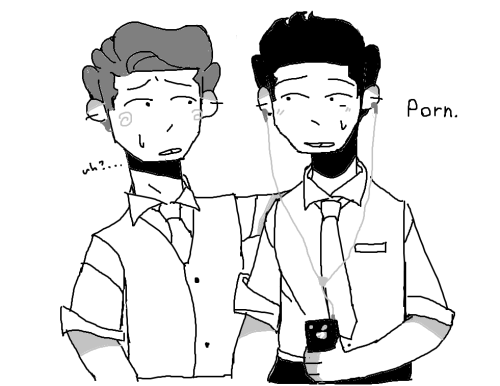 No particular order, I just went with the flow :)

10. Marshall Eriksen (How I Met Your Mother)

If you see this and think it would be fun to do, consider yourself tagged by me! :) 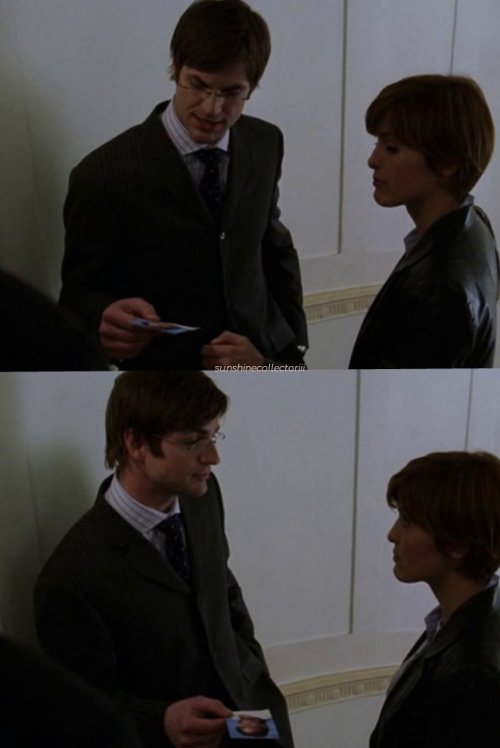